Richard Herod III has done it again. First, he orchestrated the “VOTE NO” car wraps in support of defeating the marriage amendment. This time you can wrap your vehicle with “I SUPPORT THE FREEDOM TO MARRY.” Your $50 donation to MN United for All Families, gets your vehicle wrapped on both sides and a rear bumper or window decal. The Marriage Equality Street Team will even wrap your car for no extra charge. Supplies of the vehicle wraps are limited, so email your name, phone number and vehicle color ASAP to [email protected]. If you’re not able to attend, but want to get your vehicle wrapped, please email [email protected]. 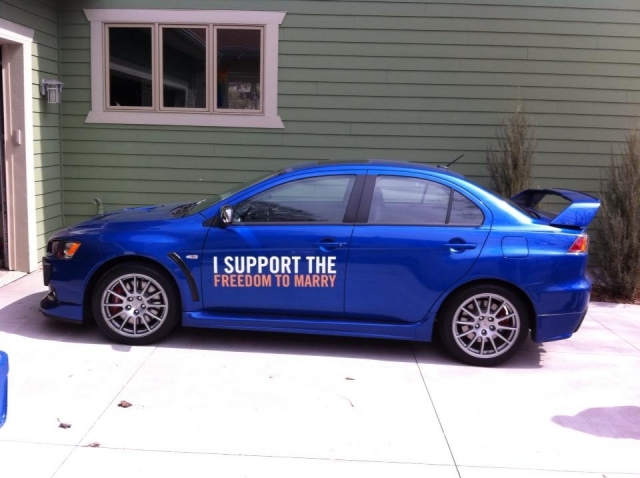 Join Ti-Nea’ and Mary Brewster for the 2nd Annual Team Sparkle Fundraiser! Like every “Sparkle” show, they’ve got the best in Twin Cities entertainers lined up, ready to spread sparkleliciousness on the Town House stage. And because this is a benefit for Team Sparkle, every dollar raised that afternoon will help send their riders to the 2013 Minnesota Red Ribbon Ride, July 18th – 21st! www.townhousebar.com

Presented by The GLBTA Programs Office, Steven J. Schochet Endowment and Tongues Untied. Since its premiere at the Sundance Film Festival and its national broadcasts on PBS’ P.O.V. series and on Logo/MTV, Brother Outsider has introduced millions of viewers around the world to the life and work of Bayard Rustin—a visionary strategist and activist who has been called “the unknown hero” of the civil rights movement. A disciple of Gandhi, a mentor to Martin Luther King Jr., and the architect of the 1963 March on Washington, Rustin dared to live as an openly gay man during the fiercely homophobic 1940s, 1950s and 1960s.This event is FREE and open to the public, and a FREE dinner will be served. 612-626-8086, https://diversity.umn.edu/glbta/20thanniversary

“I HAVE PRIDE” PROJECT
Through May 1

In honor of the continued support and inclusiveness for Minnesota LGBT rights, the theme for this year’s Twin Cities Pride Festival is “I HAVE PRIDE.” To submit a video, “Like” the Twin Cities Pride Facebook page. Then, submit a 30-second video explaining why you have Pride and how you embody Twin Cities Pride’s six pillars: strength, enthusiasm, happiness, growth, confidence and power. For more information www.facebook.com/tcpride