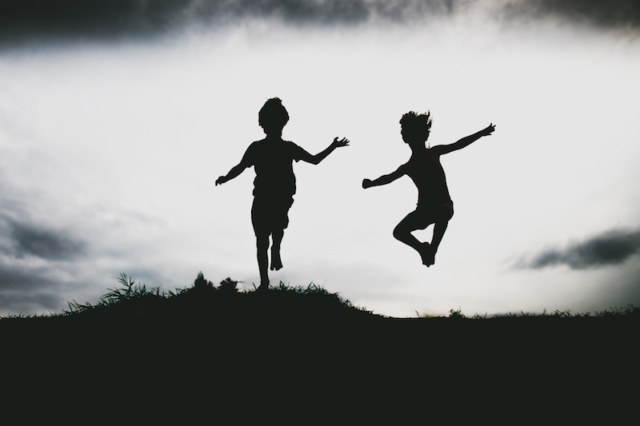 Shortly after my birth in Indianapolis, I was supposed to move to Venezuela. My loving mother and father had all of our bags packed. An extremely conservative Christian organization was sending them to the mission field and their directive for me was full-time boarding school. On a whim, on an intuition, a feeling that something wasn’t right, my parents chose otherwise. We got in our car, airport-ready, bags packed for the mission field, and headed in the complete opposite direction: to the north, to Minnesota, to liberal thinking and liberal living. Leaving our family, friends, and community behind, we fled one life and began a new one.

My parents put a huge priority on playtime, particularly in the summer. Creating fun new memories as a family helped my parents move forward in establishing a new family system with a new culture. Summers camping, playing badminton, shooting water guns, and riding bikes were epic memories to hold. While my father was a pastor, I would not classify my upbringing as rigid or harsh. My sexuality was something my parents had to see coming. I was different from the start and most apparently in the way I played.

My two favorite things as a child were my illustrated storybook Bible and dressing up as a woman. A devout eight-year-old queer, my passions would combine in something I like to call Bible Drag. I would dress up as the Holy Virgin Mary, Queen Jezebel, or the wife of Abraham. Bible Drag for me was a way of life. A Holy Virgin Mary costume, which also doubled as a Princess Leia costume, was created by belting a white choir robe from church. This lovely new silhouette was complemented by taking red Magic Marker to my lips, a ritual which received a bit more pushback from Mom and Dad.

After donning such dress, I would perform monologues for my parents on a stage made of large wooden blocks. It was the art of storytelling, straight from the pages of my illustrated and abbreviated Bible. My parents, who endured many a Bible Drag show, could grapple with the reality of what they were seeing by saying, “Well, he may be dressed as a woman, but at least he’s a Christian woman.”

It’s been fun to see some religious iconography take to the runway on RuPaul’s Drag Race. For me, Mimi Imfurst’s Virgin Mary costume was a delicious piece of nostalgia. It’s not often that I think back to my days in Bible Drag, but a return to the innocence of days past feels particularly relevant in a world that seems increasingly dark and serious.

This transition from spring to summer is usually a time that feels the most uplifting and refreshing; however, a world full of Donald Trumps, dystopian projections, smartphone-zombied youth, mass animal deaths, Canadian forest fires, and relentless racism, all magnified by an increasingly connected and informed technical world, makes for dangerous feelings of ennui.

Returning to the playful joys of childhood is a nice way to lighten things up; to realize that it’s okay to indulge in some old cartoons and some old music. Playtime is important and it’s not just for kids. In a recent NPR interview, Dr. Stuart Brown emphasized the importance of play in adults. He said, “Play is something done for its own sake… It’s voluntary, it’s pleasurable, it offers a sense of engagement, it takes you out of time. And the act itself is more important than the outcome. What you begin to see when there’s major play deprivation in an otherwise competent adult is that they’re not much fun to be around.”

So this summer, throw back to your past. What was your Bible Drag? What realities did you play with before your world was fully constructed? Take stock of those childhood memories that meant the most and make some new ones. As the weather takes a turn for the better, let’s take a moment to embrace our youth, our sense of wonderment, and the playful nature that summer in the Land of 10,000 Lakes is really all about.