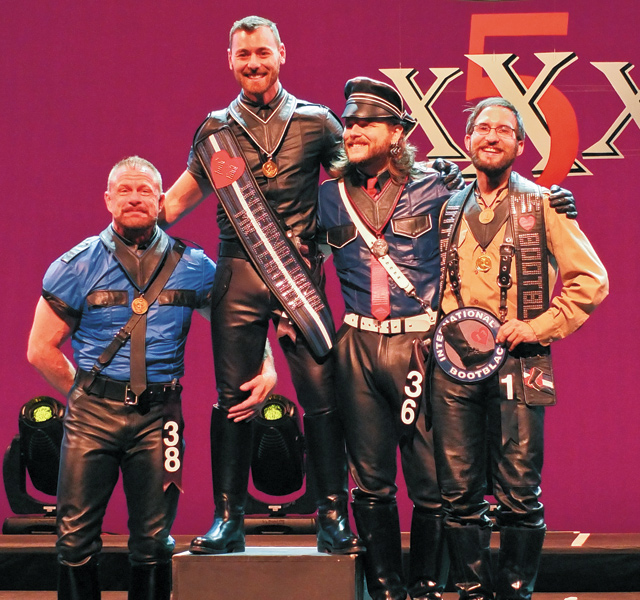 This year’s IML weekend had a new host hotel in a new neighborhood: the Chicago Marriott Downtown/Magnificent Mile on North Michigan Avenue. Because the host hotel sold out quickly, IML also made arrangements with three other adjacent hotels.

But it appeared that most of the weekend’s socializing revolved around the host hotel’s lobby bar, ironically named “Rush.” (Yes, “Rush” is the street outside the hotel, but it’s also a famous brand of poppers–I mean, room deodorizer.) The Twin Cities’ own Miss Richfield made an appearance on the bar’s video screens, courtesy of travel website Orbitz.com.

The weekend-long IML Leather Market featured 120 leather and fetish vendors, clubs, and organizations. The market was on both the fifth and seventh floors of the host hotel, and there was express escalator service between the two floors. With up to 6,000 visitors every day, the Market was packed.

Friday evening’s Opening Ceremonies and Saturday evening’s Physique Prejudging (also known as the “Pecs & Personality” event) were held at The Vic Theatre, which was the venue for the IML contest several times in the late 1980s (and which reminded old-timers of The Congress Theater, the contest’s venue from 1994 to 2004 and again in 2010). Sunday evening’s Contest and Show event returned to The Harris Theater in Millennium Park, a venue also used for the Contest and Show in 2011.

(Bus transportation, a formidable responsibility with so many events not at the host hotel as in some previous years, was ably coordinated this year by Twin Cities resident Jason Bribitzer-Stull.)

Chuck Renslow, IML founder and Executive Producer, was around during the weekend in spite of some recent health challenges. Renslow had triple-bypass heart surgery in January; while recovering from that he fell out of bed, broke three ribs, and subsequently developed pneumonia. IML coordinator Jon Krongaard handled Renslow’s speaking duties at the Friday and Saturday evening events, but on Sunday evening Renslow both welcomed the crowd to the Contest and Show and announced the winners at the end of the contest.

Entertainment at Sunday evening’s Contest and Show was a one-woman performance by singer Beverly McClellan, as seen on NBC’s “The Voice”—and boy, does she have one (a voice, that is). Combine Janis Joplin, Etta James, Bonnie Raitt, and Melissa Etheridge—and then multiply by ten. She plays a mean guitar and a soulful piano, too.

Named as the new International Mr. Bootblack was Sammy, from Portland, Oregon. The Jeffrey Payne Lifetime Achievement Award, a relatively new addition to the IML weekend, was presented this year to Rick Storer, Executive Director of the Leather Archives & Museum.

Next year’s IML weekend will be held May 23-26, 2014, and the Chicago Marriott Downtown/Magnificent Mile will again be the host hotel. Rooms may be reserved starting on June 20, 2013–book early by visiting imrl.com.