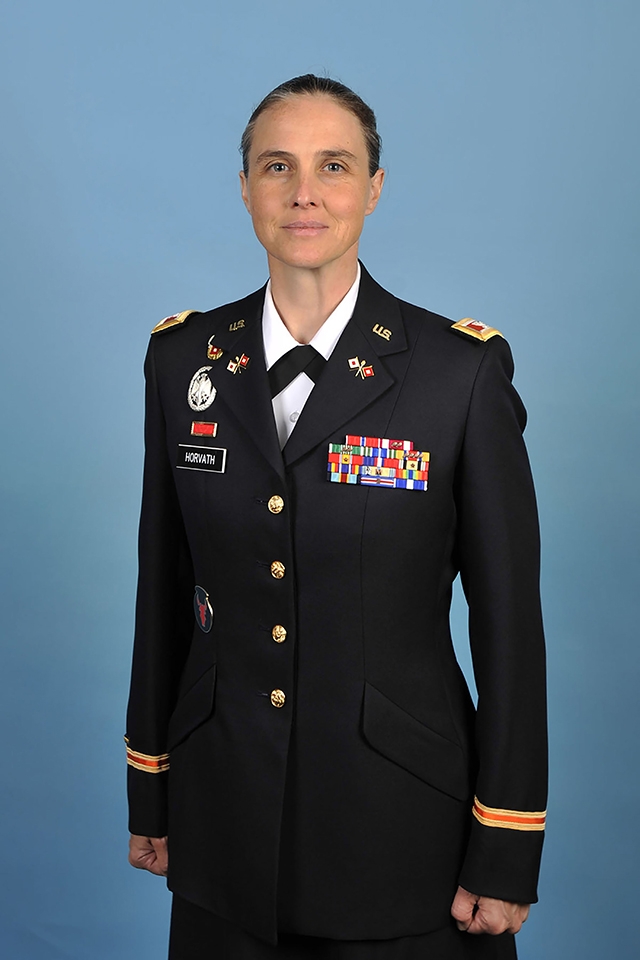 Col. (P) Stefanie Horvath will make history when she becomes the first openly lesbian Brigadier General in the history of the Minnesota National Guard.

When it came to her decision to ultimately join the Minnesota National Guard, Col. (P) Stefanie Horvath said that it likely came down to a visit to Twin Cities Pride Weekend back in 1997.

“One of my first visits to Minnesota was to attend Pride Weekend and then every other life decision (including jobs and home) was based on how to be closer to Pride Weekend,” said Horvath. “I was so amazed by an entire park filled with the GLBT community—it was a little mind blowing and I was known for being a bit rash as youth. At that time, I was already a commissioned officer in the ND Army National Guard and it was easy enough to transfer into the Minnesota Army National Guard. Best decision ever.” 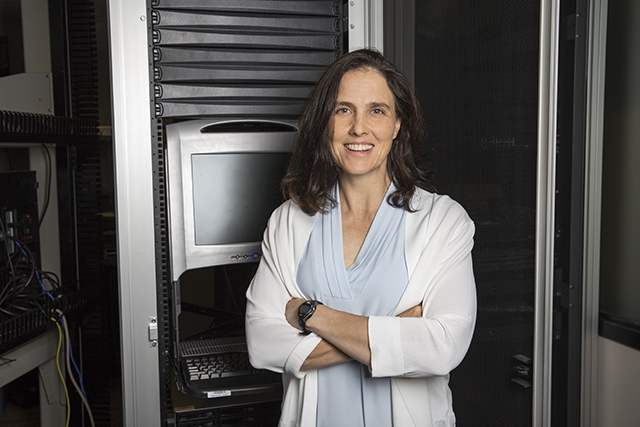 Col. (P) Stefanie Horvath has been an outspoken advocate for the presence of women in technology. Photo by Jerome Crea

“I am currently a Colonel in a position that oversees planning and operations,” said Horvath. “This is one of many positions I’ve held in the military which, no shock, is quite a vigorous institution when it comes to individual development and metrics. This promotion to General Officer was not one made on a whim, but years of evaluations and assignments. I call that out, not to just showcase my work but to showcase my raters and senior raters who accurately attributed my work to my performance in a written evaluation. Diversity and Inclusion doesn’t exist without correct attribution and organizational career management, regardless what the D&I PowerPoint presentation says.”

Born and raised in Minot, North Dakota, Horvath attended North Dakota State University. A proud Bison, Horvath’s path eventually took her to the 2nd Battalion, 135th Infantry headquartered in Mankato, MN, where she was the only female in her battalion in her very first deployment to Kosovo post-9/11.

“I was their SIGO (Signal Officer) responsible for keeping their communications and computer equipment up and running,” said Horvath. “Of course this is not going to start off well, but by the end of the deployment, I truly felt like a part of that combat force. I could fix their printers and radio antennas without yelling as much as the previous SIGO. I could run two miles pretty fast (thank you rugby training) and could fire my weapon.”

“When the March riots occurred in 2004, 2nd, 135th INF BN stood toe to toe with very angry mobs from centuries of conflict to protect people and churches from fires, all without ever firing a shot. It was a very intense time that really only built a stronger team,” Horvath continued. “I was asked to assume a coveted Battle CPT position to help manage the Tactical Operations Center and stayed in that rotation for the rest of the deployment.” 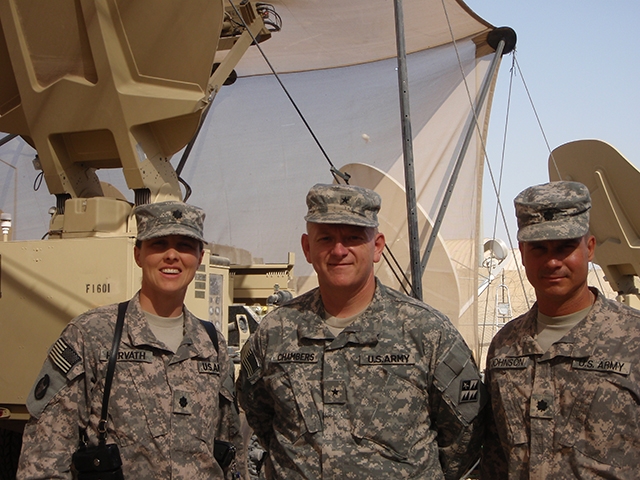 Horvath’s overseas service continued with a second deployment to Iraq in 2009, now as the 34th Division’s Assistant Chief of Staff G-6, where she was responsible for Command and Control, Communications and Computers in an entire southern region of Iraq.

As far as her coming out story goes, it all goes back to the days of Don’t Ask, Don’t Tell. Around that time, queer voices weren’t as amplified as they are today.

“In 1997, positive gay characters did not appear on every TV show, nor were the words of profound GLBT members projecting on podcasts,” said Horvath. “There’s so much great content to absorb and all the better to bring a resounding, thoughtful voice to a lone individual who is struggling with their identity. At the time, I was just grateful for the Amazon Feminist bookstore off Loring Park and, of course, Lavender Magazine for the latest and greatest.”

Horvath noted that prior to the enactment of DADT, harassment of queer troops was at a fever pitch, forcing many service members out.

“One member I know personally, Barb Fugate, could run a mile faster than most men IN the service, had impeccable educational credits and had to to resign,” said Horvath. “At the time, she was an intelligence officer with a top secret security clearance. An impending re-investigation for that clearance would have exposed her. She chose to be honest and was kicked out for it. She would go on to become a national leading rugby coach and a CIO/CISO in the banking industry, but we will never truly know the negative impact on organizational performance of the services from losing people like Barb. The military has progressed, but there are those today who dealt with an unrelenting environment hell bent on punitive harassment. I believe it is important to remember these stories.”

Horvath is also hugely passionate about promoting women in technology, and provides platforms for women in tech to present.

“Each woman is on her own path so it is important to understand her individual goals and concerns about technology,” said Horvath. “I confess I am not a super coder and certainly have more will than skill, but there are so many IT-related jobs, there seems to be something for everyone. If a woman does not want to code, how about IT project management and business analytics? I think some women slay at these critical functions to launch good software.”

Horvath is currently married to her wife Christy, and has twin daughters. Horvath says that Christy has been an amazing and supportive military spouse.

“Christy and I wanted kids, and as the process is not entirely controllable, she became pregnant right before the Division deployment,” said Horvath. “Although I was home for the births, the hardest day for both of us was one week later, when I returned to Iraq and she returned to the house with little humans. I would say Christy had the tougher duty and faced more uncertainty… Thankfully, Christy had our amazing rugby friends that brought over meals and even more amazing parents that painted closets, dutifully watched over the girls and gleefully wrapped them up in everything pink and purple.”

Now that DADT is in the rear window, Horvath says that her experience as an openly queer soldier in the Minnesota National Guard has been nothing short of superlative.

“I have really felt nothing but support from day one and it has only grown since the repeal of DADT in 2010 which led the way for members to serve openly in the services,” said Horvath. “Back in 2009, before the repeal, as I was filling out my readiness paperwork for the Division deployment, the highly proficient admin clerk didn’t bat an eye when she keyed in my emergency contact as Christy, not Chris. Those two additional key strokes meant everything from Christy knowing something happened to me and entitled her to my benefits”

So as Horvath prepares to make history as the first openly lesbian Brigadier General in Minnesota National Guard history, what words of wisdom does she have for young queer folk considering serving their country?

“It is not easier to serve their country but the difficulty does not stem from a soldier’s sexual preference,” said Horvath. “The organization is more open and accepting than ever before. The difficulty stems from the commitment necessary to be ‘Always Ready’, the mantra our citizen soldiers adopt, because when the Guard is called up, there is an emergency. The GLBT (community) has much to offer in solving complex mission problems by their creative thinking and many competencies. The services are finally acknowledging it.”