A Word In Edgewise: First Comes Love, Then Comes Marriage, Then… 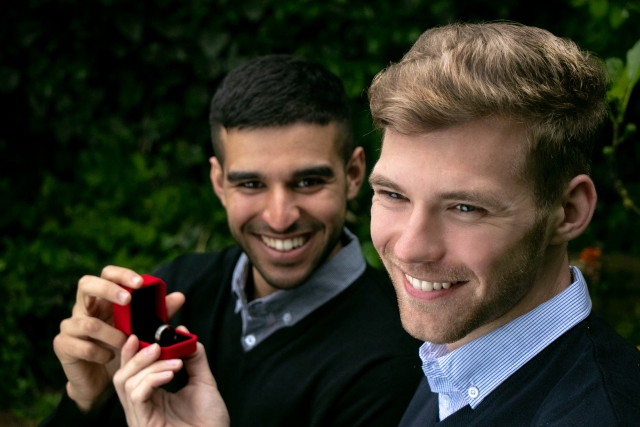 While “Baby Carriage” no longer must necessarily compete the triad of the old playground K-I-S-S-I-N-G song lyric, and today babies are no longer de rigeur to complete socially sanctioned marriage, many same-sex couples (along with straight counterparts) do continue to envision a future with offspring.

Yes, there are still naysayers hotly opposing gay love, gay marriage, and especially gay parenthood of either natural-born or adopted children. But I’m not tackling that topic here, not pointing out they’d prefer to see a child institutionalized than embraced by a loving, gay family, nor how ill-informed… but I digress. I’m talking here about wedding-bound gay couples; those potential parents-to-be.

The standard response to “Do you want a boy or girl?” is, “We just want it to be healthy.” Of course. But doesn’t everyone have some wish, overt or secret, they ponder late at night thinking about the newcomer?

Gender preference is one, but perhaps, “Don’t let it look like my sister Sue, or my brother Bob—that’d be awful!” or even, “I hope it looks like me!” There are hopes we didn’t know we held until they’re dashed. Some are particular to the parent’s specific situation. I recently read the admission of a second-generation deaf man, married to a deaf woman. Their first two children were deaf, but the third was hearing, an actual disappointment to the father. Of course he loved the child, but its very “normalcy” was cause for chagrin.

What if you—with or without your explicit realization—want a little musician but get a jock? Or vice-versa. Or you produced a boy ballerina and a girl basketball prodigy?

I didn’t have children, but we all were children once, and it would be the rare adult who didn’t feel their parents had some agenda for them, often experiencing different expectations from each parent. My own father was given to shaking his head and remarking from time to time in my presence, “Children are hostages to fortune.”

As to love and marriage, Sinatra crooned that “You can’t have one without the other.” Maybe. One hopes, but that’s another discussion. As far as the “baby and carriage” choice, I’d say, paraphrase and personalize Mr. Rogers: assure your kids often, “We love you just the way you are.”