A Televangelists’s Legacy: An Interview with Randy Roberts Potts, Part 2 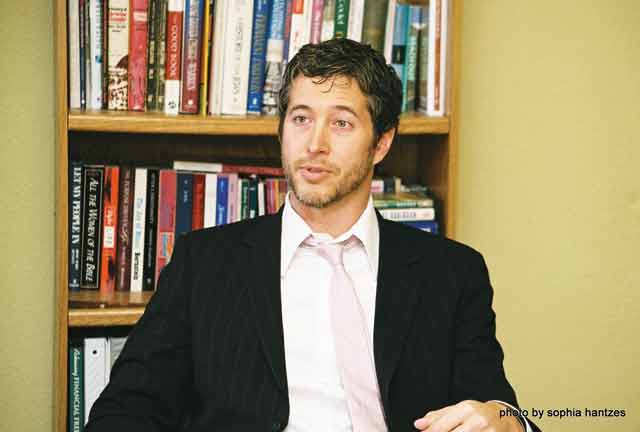 Randy Roberts Potts is the grandson of Oral Roberts, a televangelist from Tulsa who was famous for many reasons, not the least of which were his conservative values and faith healing.  Randy grew up carrying the Roberts name, married at age 20, had three children, and came out at age 30.  His perspective is broad and his experiences are deep. Recently, Andrew’s Roundtable brought Randy to Minnesota to speak to various audiences about growing up as Oral Roberts’ grandson, the loss of his gay uncle, Ronnie, and what it’s like to be out of the closet as an adult.  I was able to interview Randy at All God’s Children Metropolitan Community Church in Minneapolis and appreciated most his discussion about how to reconcile family, faith, and sexuality.  Read the first half here.

How do you explain homosexuality to a person who is from a faith background?

I think, to me, you talk about it like you do heterosexuality, which is you talk about love. So when you think of a straight couple, you think of people having a house and a dog, maybe they have kids. They go on romantic getaways, they love each other, they care about each other, they take care of each other. You don’t talk about the bedroom when you talk about a straight couple. To me, it should be the same way with a gay couple. It’s, sex is a part of our life, but it’s probably 1 or 2% a part of most people’s daily experience. And, really, what being gay is about is just what being straight is about, it’s falling in love with someone, and maybe finding someone that you want to spend your life with. And so, to me, it’s like let’s turn the conversation to, you know, what’s really important to gay people which is the fact that they have relationships with same sex and that they love that person.

Do you believe that God created homosexuals?

I think that nobody knows, I think that definitely it’s not something that anyone can control. Whether we’re born this way or we become that way within a year or two, I don’t think that science can really answer that, but I…I firmly believe that just from experience, it’s not something that you can change. I know myself, and so many people who spent years trying to pray and say, “God, you know, change this in me” and it doesn’t change, and even people like leaders of the ex-gay movement have now come forth and said it doesn’t work.

And what do you do when it doesn’t work?

Yeah, and what you do is realize that, you know, you can still can be loved and still are a legitimate good person and, and that you can have legitimate relationships and that you’re not cursed to go to hell or something like that.

So the choice aspect, is it not whether to choose to be that, but I was kind of wondering to choose to come out?

How did you choose to come out?

For me, what happened was that I was an English teacher and I was suicidal in the sense that I just wanted to die.  I would wish, that you know, my car would hit a tree or something. And then one year, I had this student, who, he was 12 years old and his dad had killed himself the year before. And I didn’t know why, but he just had it on his face, just written that he was going through this trauma and I felt so bad for the kid. After about a month or so of watching and every day he came into the room and even if he was laughing with other friends, you could still just see, this little thing haunting him. And I looked at him and was like, “that’s what my kids would look like if I committed suicide.” And that just made me feel like okay, I have to find a way to be a happy dad for my children. And, and, whatever that way is, I’ll do it. And, I finally realized that to be a happy person—to be at peace with myself—I had to come out.  And, so I did.  And I am happy and at peace.  And I feel that my kids have a dad who is happy…so it really was that I had to honor myself and be happy for my kids’ sake.  Because if I’m miserable, then they have a dad who is miserable.

How will you answer your kids’ questions when the tough ones come up?  Is their mother kind of in the same camp as your mother?

No, she’s not.  I really don’t talk about my ongoing relationship with her but she and I always had gay friends, she is not homophobic.

Do you think your mother will ever come around?

I talk to people in the sense that they can’t be cured of their heterosexuality.  It’s not something that can be healed because it’s not something that’s wrong. When you fall in love with someone, that’s not a wrong thing.  That desire to love someone or be with someone for the rest of your life is not something that even God is against. And, it’s not something that you should even ask for healing from. It’s interesting, a minister much older than me told me that he went to my grandfather’s meetings sometimes.  One time, in California, a man came up in one of the healing lines and he said, “What do you want me to pray for you for?” and he said, “I’m gay.”  And this guy [the minister] says that Oral looked at him and said, “I can’t pray for you because God won’t change you.”  And the guy said, “Well, can Jesus still love me?” and Oral said, “Yes, yes he can.”

I think that what Oral meant is that he saw it as something like alcoholism—you’re just going to have this desire and you’re going to have to push it down.  He said that God doesn’t heal people from this, that I won’t pray for you because this is how you are…but that you can be loved.  In his own way, I think that was his way of being a little bit tolerant and loving, I still think it’s problematic because then you condemn this person to celibacy or something—denial—all humans agree that we all want to find someone to be in love with and so I don’t like that.  It was really interesting that he had the sight to see it.  His own son was gay and he knew it and his son couldn’t change and he knew that.

It really is who you are down deep inside.  I think straight people understand that—they could never be gay.  They realize that.  I’m the same way, I can’t really change this.

It’s a way to relate.

It’s a way to relate.  And to also say that it can’t be wrong when we fall in love with each other, when we commit our lives to each other.  It’s just not wrong.