A Sure and Steadfast Anchor of the Soul 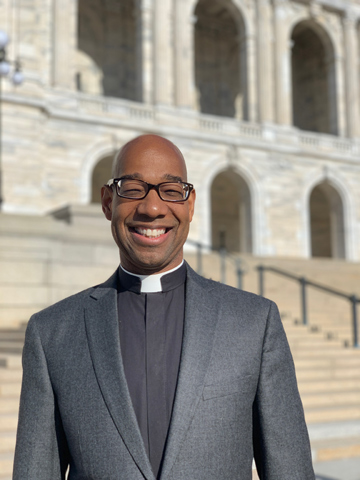 Rev. DeWayne Davis is the pastor of All God’s Children MCC in Minneapolis. Photo by Kareem Murphy

Long before he became the pastor of All God’s Children Metropolitan Community Church (MCC), Rev. DeWayne Davis didn’t originally have his eye on the ministry. He was all about heading to the bright lights of the Big Apple.

“I was a little gay boy in a conservative area, and I knew since I was a kid, I had to get to New York,” said Davis, a native of Indianola, Mississippi. “I wanted to go to New York because… I grew up on PBS, and that’s where I saw all of the broadcasts of theater.”

The youngest child of 15 born to a Pentecostal preacher in Sunflower County, Davis never did make his journey to the city that never sleeps, but he nonetheless put himself on a trajectory for personal success, attending Howard University in Washington, D.C. for a major in economics.

“I also knew that I was going to come out to my parents, and I was very much concerned,” said Davis. “I was accepted to some schools in New York, but I knew that if I went to school there, my parents had to pay for it, and I was thinking about coming out to them when I got out of college.”

“I did not want to hear my father tell me, ‘I’ve paid over a hundred thousand dollars for you to go to school. You are not gay,'” Davis continued. “I received a full scholarship to Howard. That was a great blessing for me because I met the young man who would become my husband. We have been together 28 years. I married my college sweetheart.”

After graduation, Davis began working in the political sphere, working as a congressional staffer before eventually becoming a lobbyist for Sallie Mae. But during this fruitful period in his life, Davis said he began to get urges that recalled a profound moment in his childhood.

“At age 14, I went to a tent revival, which is something that we always did,” said Davis. “But I had the experience in that revival of what we call receiving the Holy Ghost. I had this ecstatic experience of God. It was a true and powerful experience that I learned to sort of keep as a part of my storehouse of experiences.”

Around the same time in his youth, Davis met another chorus boy in middle school who became his first boyfriend, as well as the first person that Davis ever disclosed his sexuality to.

Fast forward to his days in Washington, where Davis discovered an affirming local MCC congregation that sparked his curiosity. Entering the establishment elicited the same feeling of spiritual invigoration that Davis felt all those years ago as a teenager in that tent revival.

“For the first time in my life in a church setting, I began to see that no part of myself had to be sublimated or secret or feared, and nothing about me was either unknown or unacceptable in some way,” said Davis. “I was just crying. I couldn’t quite get myself together. It was nothing about the message that I doubted; and yet, the message was so profoundly transformative. I had to see it, know it, and explore it further.”

Davis said that this discovery pushed him to dive deeper into his faith community, leading him to pursue a Master of Divinity degree from the Wesley Theological Seminary in D.C., after which he moved to Minneapolis and became the lead minister at All God’s Children in 2013.

All God’s Children has proven itself to be a progressive, inclusive community extremely accepting of the GLBT community, and social justice has been an integral part of its message.

“One of things that I believe the church is… is the outpost of the reign of God,” said Davis. “We should see ourselves as creating an alternative ordering of society where there are no outsiders. [They] are the people that we should be talking to about the kind of ministry and beloved community that we’re trying to build.”

All God’s Children has partnered with many local GLBT and GLBT-friendly organizations such as JustUs Health and Pride Institute, as well as hosting Sunday services every Pride festival.

“We’re not looking for members or converts: that’s not our job,” said Davis. “Our job is to bear witness to a faith and religion that values you and looks for your liberation. We were very active in the Poor People’s Campaign here a couple of years ago. We do a lot of work with the downtown congregations to end homelessness. So this ministry of ours is not so much in just what we say, it is also how we try to live out our faith.”

Obviously, the recent COVID-19 pandemic has made operations difficult for places of worship like All God’s Children. Despite temporarily closing their doors, the church continues to keep their financial commitments alive, such as maintaining their charitable Benevolence Fund. They’ve also stepped up their strategy of online communications so congregants can still worship with their pastor virtually, such as Facebook livestreams every Sunday morning.

“We are launching a weekly devotional time at 3 p.m. on Wednesdays on our Facebook page called ‘Solace for the Soul,'” said Davis. “I’m going to use that as an opportunity to just sort of interrupt the flow of news, and get us to sort of settle down and try to connect with each other…it’ll be a time for prayer and some poetry, some reflection, raise some questions acknowledging where we are, but at the same time, sort of try to create another sense of our community and double down on our identity as a beloved community.”

Davis said that those interested can still support the church by visiting their Facebook page, as well as offering a Stewardship pledge donation for the church on their website. In the meantime, Rev. Davis and All God’s Children will still continue to do their good work for the good of their community.