A Reflection on Two Decades 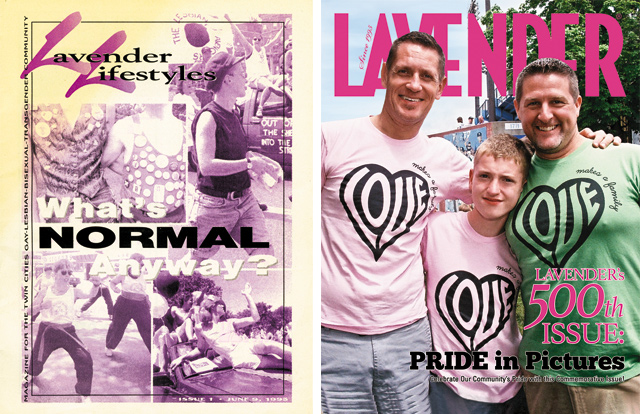 For any publication, its 500th issue and 20th year are certainly reasons to celebrate. Lavender’s current issue is number 500, and the magazine began its 20th year in early June. It’s a time to look back on two glorious decades in our publication’s history.

In the spring of 1995, Lavender cofounders Stephen Rocheford and I set out to launch a magazine that would both serve the Minnesota GLBT community and remain financially viable for the long term. Our mission statement reflects that goal: “To appeal to the greatest number of Minnesota GLBT readers, and direct them to our advertisers.” The first issue of Lavender debuted on June 9, 1995. We chose the publication’s name because the color lavender has always been associated with GLBT folks for time immemorial, as Judy Grahn points out in her classic Another Mother Tongue: Gay Words, Gay Worlds.

From the early 1970s to 1995, some 25 local GLBT publications appeared and then disappeared. Most notably, the newspapers GLC Voice, Equal Time, and Gaze each lasted for about a decade. Continuing this trend, some ten publishing ventures suffered the same fate after 1995. Across the United States, too, a bevy of national and local publications has gone under in that time frame.

On the other hand, Lavender has thrived for two decades because it has been financially stable from the outset, thanks to the tremendous support of a host of advertisers over the years. In addition, Lavender’s magazine format has proved to be popular with readers and advertisers, in contrast with the newspapers of yesteryear.

Lavender has continually improved the look of the publication since 1995. In 1998, it started to use full color throughout, and in 2005, it began to print on all glossy paper. Plus, the magazine’s design has frequently been enhanced. Along with its look, Lavender has offered a superlative cornucopia of content of interest to readers in the GLBT community and its allies. The print magazine is available at more than 900 distribution sites locally and regionally. As well, Lavender’s growing online offerings reach many thousands of additional readers.

The backbone of Lavender’s success has always been the people who have put together the magazine every other week for 500 issues. The present staff includes the following six (listed by their name, their position, and the year they joined the publication) who, along with the cofounders, have been with Lavender for a decade or more: Barry Leavitt, Sales & Advertising Director (1999); Pierre Tardif, Vice President and CC (1999); Carolyn Lima, Chief Financial Officer (2001); Sophia Hantzes, Photographer (2000); Suzanne Farrell, Senior Account Executive (2001); Hubert Bonnet, Creative Director (2004); and Austin Lindstrom, Administrative Assistant (2004). In addition, contributors Steve Lenius and John Townsend have been with the magazine from the first issue, and contributor Carla Waldemar came on board in 2001. However, a host of other staff and contributors has brought Lavender to the GLBT community over the past two decades.

Given Lavender’s present strong position, in line with the vision of cofounders Rocheford and me, the magazine’s future looks bright indeed. We thank our readers and advertisers for helping us to reach our historic 500th issue and 20th year.