Our Wedding Story: A Love Story Fit for a King and a Queenie 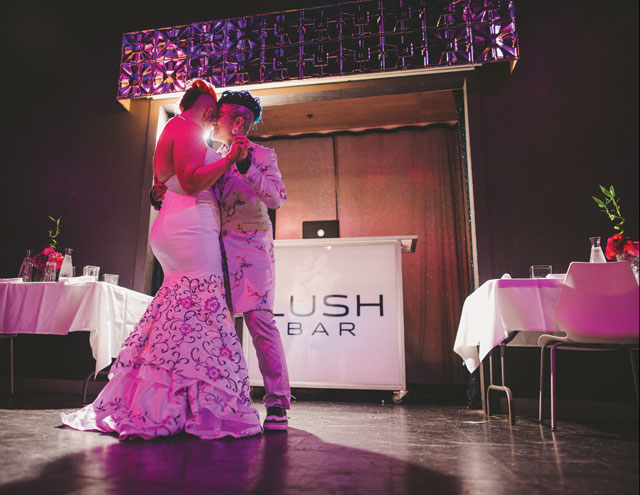 Renata and Emi Nijiya share the story of how they fell in love and details about their wedding.

Virginia and Minnesota might seem like they’re worlds apart, but for Renata and Emi Nijiya, they couldn’t be more connected. Renata grew up in Richmond, Virginia and attended Longwood University where she studied theater performance. After school, she moved to Minneapolis to work as a costume designer where she has worked in a number of theaters as both a designer and actor. She was also a company member of Ballet of the Dolls and eventually discovered her passion for burlesque dancing, which she continues performing today as Queenie von Curves. After a brief stint as a vegan butcher—she really has tried everything—Renata began working as a box office manager for Theater Latté Da at the Ritz Theater. 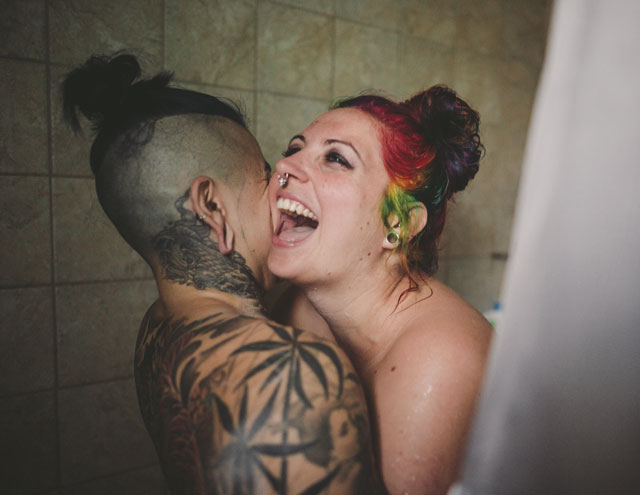 Emi, on the other hand, is all Minnesotan. After growing up on Ham Lake and attending Blaine High School, Emi went to Concordia College where they studied music for a year before transferring to St. Cloud State University to study business management. They went on to a tattooing apprenticeship after college and is now an owner of Jackalope Tattoo in South Minneapolis. Emi has also been performing as a drag king for nearly 15 years as Damien D’Luxe. Additionally, Emi is a cast member with #dragrevolution at LUSH and performs around the state at other venues. 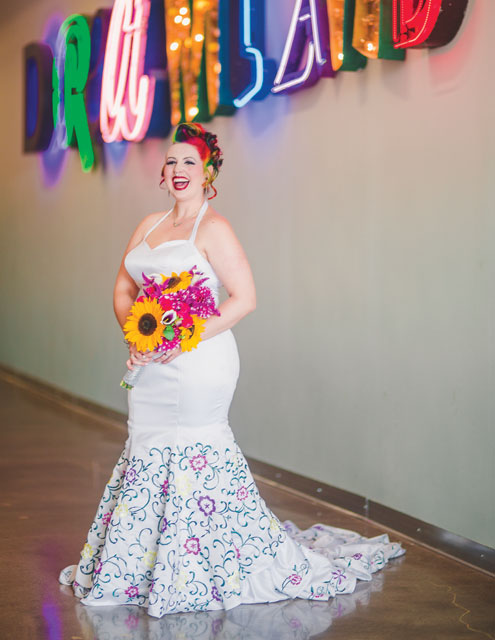 Performing is what Renata and Emi both love to do, so it’s no surprise that it’s how the couple met. In December 2013, Renata and Emi were performing at Hell’s Kitchen with Black Hearts Burlesque. 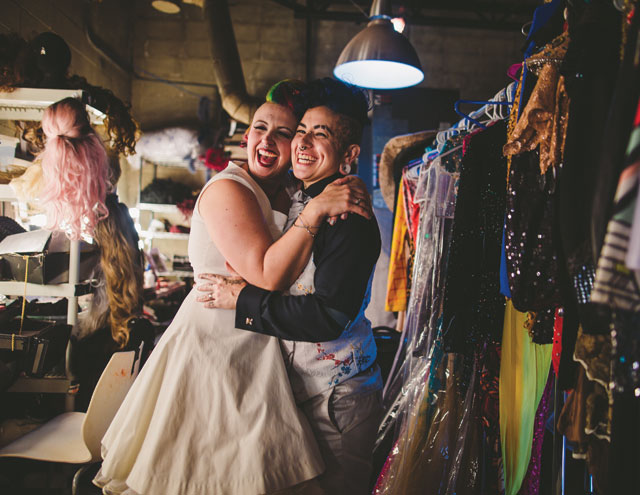 “I was dressed as a dreidel for my Hanukkah number, and they were dressed as Sporty Spice for a group number. I immediately asked around to find out who they were and was told they were Damien D’Luxe, and I was immediately smitten,” Renata says. 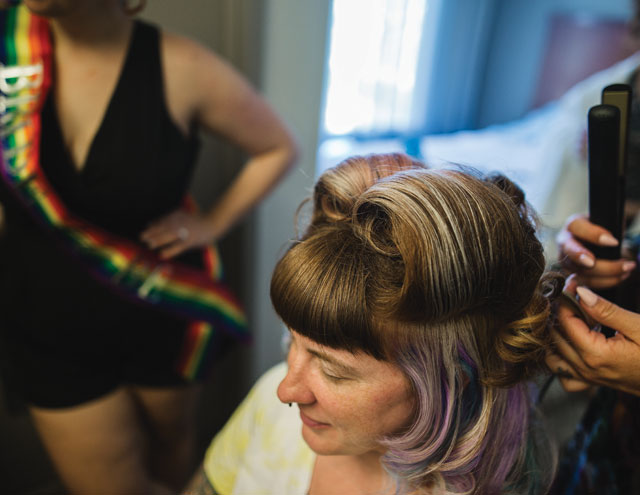 The couple performed in a number of shows together over the next couple of years, and after becoming close friends, they realized their love for each other. 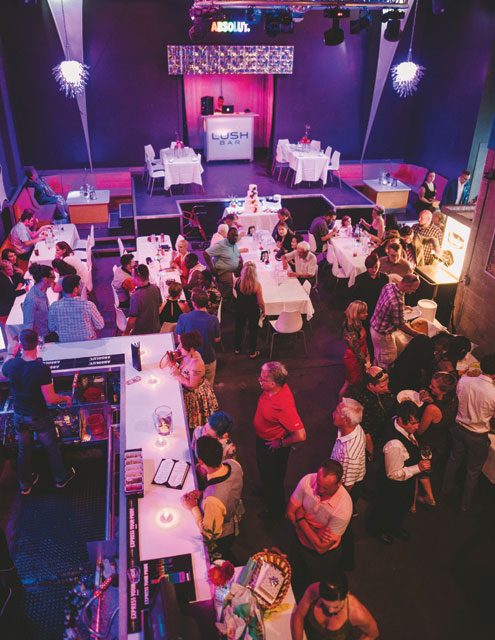 “I always knew I wanted to be near her and to know her but it took years to figure out why. After years of friendship, we discovered we were soul mates and have been inseparable since,” Emi says. 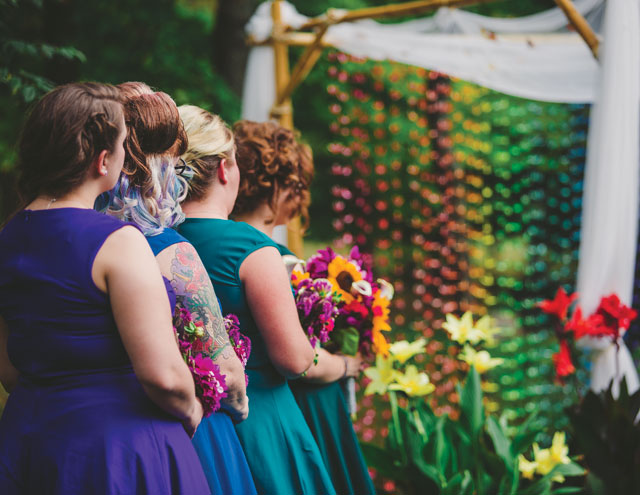 Once they started dating, Renata and Emi took no time planning their wedding. Not long into their relationship, the couple bought locally made rings from I Like You and arranged engagement photos. During the photo shoot, Renata surprised Emi with a traditional proposal where she got down on one knee and pulled out a set of rings that read “I love you like crazy” and “Renemi,” their couple name, which were made by Renata’s favorite jeweler, Everthine Jewelry. 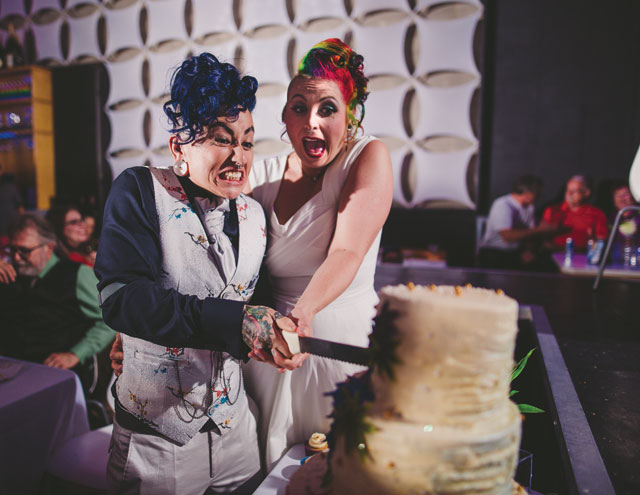 Renata and Emi tied the knot on September 24, 2017 in Emi’s parents’ backyard with a reception at LUSH, the couple’s “second home.” 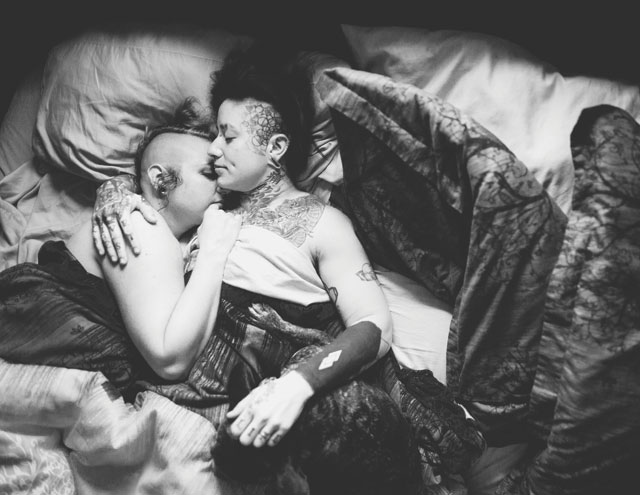 “Our wedding ceremony was relatively small, with family and close friends. Our wedding party included my sister and three best friends and Emi’s brother, cousin, and two best friends. We were both walked down the aisle by our parents while our dear friend Paul Brekke, a.k.a. Victoria DeVille, sang ‘Rainbow Connection.’ Our wedding was officiated by another dear friend, Kata Garrison,” Renata says.

Emi says their favorite part of the big day was the exchanging of the vows because they were nearly identical, proving that the couple was destined to be together.

“It immediately reaffirmed to me that we truly are soulmates. I also loved watching Renata walk down the aisle towards me. Seeing her face light up with happiness is still a crisp, perfect memory in my mind. One of the more emotional parts of the reception was the father-daughter dances and listening to our dads’ speeches about us. Both had me in tears of happiness,” Emi says.

Renata and Emi say their wedding was unique because it incorporated elements from both of their heritages, Japanese and Jewish, and to top off an already perfect day, their French bulldog Harley was their ring bearer.

“Our heritages were especially highlighted during our ceremony, being married under a chuppah that was made of bamboo instead of the traditional birch, and had waterfalls of 1,000 origami paper cranes, folded by Emi’s family, and also stomping on the glass with a Mazel Tov! We loved that we had so many friends and family be a part of the ceremony and reception from music to photography to food to officiating,” Renata says.