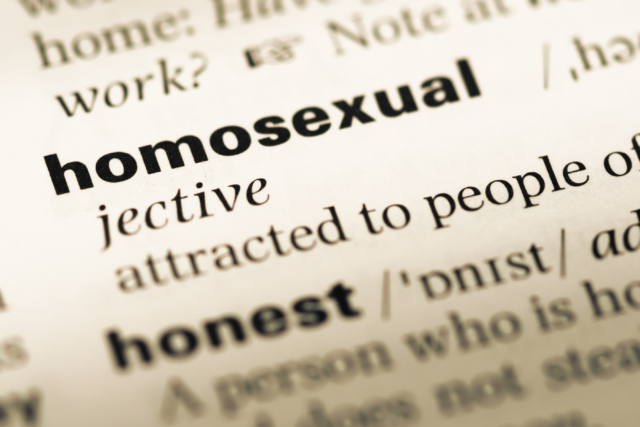 I can remember in the seventh grade, hiding in the back of the library, flipping through the Encyclopedia Britannica. My back was to the wall, legs bent, to keep others from seeing the pages. Each section I read was followed by some bolded terms: “see related” it would say. It was a scavenger hunt of sorts and I was searching for an answer though I didn’t know the question.

From “men” to “romance” to “puberty” I was following a dizzying, delirious emotion more than any logical thought process. I just read what made me feel warm, flushed, excited, terrified, confused. I was looking for an echo of myself. Eventually, I found it. I remember my hands shaking and quickly shutting the book, slamming it back onto the shelf. But not before I read every word.

I did not know, and those one-and-a-half columns in an encyclopedia told me nothing.

My name is Patrick Boland. I am a current fourth-year medical student. I am also, as of this, my first written piece, a columnist for Lavender magazine.

I am also gay. To go from an encyclopedia entry and feeling utterly alone to becoming a part of the GLBT community — known, embraced even — is utterly incredible and these pages and words will come to explain that journey.

So why write these words at all? I think because living as a gay man in Minneapolis over the last four years has changed me almost as much as medicine has. In both worlds, I have been forced to grapple with a people and a world and a set of values and a way of thinking entirely at odds with everything I had known before. I have been forced, in turn, to listen to the countless narratives of others. And in that listening, I’ve learned how much of our world is a thousand times more gray than any of us cares to admit.

Why does that gray scare us? I think because it would require us to recognize that maybe our lives aren’t right just because we’ve checked off the boxes. That maybe the story we told ourselves and tell ourselves at night about the life we want and currently have has nothing — nothing — to do with the possibilities of the world at large. Travel the world? I have a family. Pursue that big job? Not smart enough. Open relationship? I have morals. Monogamy? Unrealistic. Gays? Heathens. Straights? Unoriginal. Bisexual? As if. Transmen and women? I get the gay thing, but, queer? What a dumb word. Gay community? I mean, I sleep with men, but I don’t want to be a part of all that.

One of my favorite quotes, which my friends have heard again and again and again, comes from the novel Gilead by Marilynne Robinson. She’s writing in the first person from the perspective of a pastor in rural Iowa. At one point the pastor states that his favorite theologian used to imagine that all of us were actors on a stage and God was simply a member of the audience. That way, God’s response to us would be aesthetic rather than morally judgmental.

I always thought that was beautiful.

The reason I write is because I love stories. Stories are a medium more emotional than descriptive. You read the words silently, in the quiet of your mind, and as you read the words you hear them spoken in your own voice, your own inner voice. And I think in using your inner voice to say sentences and words you’d never agree with or never tell yourself in the real world, you have to empathize. You have to enter into that space.

So enter into my space. Take these words, and the words of this column going forward, as my encyclopedia entry for “Homosexual.” It wouldn’t get in the Encyclopedia Britannica. It also won’t be dry, clinical language.

And when some young man or woman reads these words, maybe he won’t be shaking in the back of a library. Maybe, just maybe, he’ll be sitting outside on his front lawn, relaxed, reading beneath the open sky.