A DeGree Of Resilience 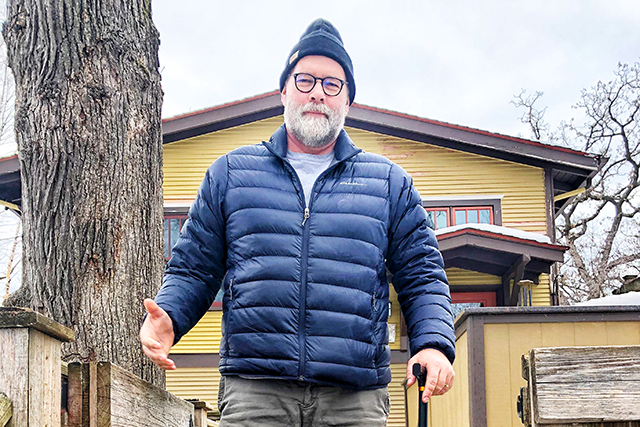 Tom DeGree suffered internal organ injuries, cracked ribs and sternum, and an amputated right leg as a result of his car accident from last year. Photo by Dean Schlaak

As the old cliché goes, tomorrow is never guaranteed to us. Everything can change, for better or for worse, at the drop of a hat. Prior to Oct. 26, 2019, Tom DeGree never thought that his life would radically change in ways that none of us could comprehend. But even after enduring an unimaginable accident and coping with the physical and mental fallout, DeGree clearly isn’t giving in to adversity, almost nine months later.

“You have to figure out what you can do to have your life seem normal again.”

A longtime education advocate and businessman, the day of Oct. 26 was meant to be a sojourn for his current job as the associate director of the Minnesota Charter School Association.

“My boss and I were up…doing a training for a charter school board, and we were driving back and I was a passenger in the car,” said DeGree, who lives in Lake Elmo with his husband Dean Schlaak. “And at that point, I remember nothing. I had probably been sleeping.”

While DeGree was asleep, the Jeep his boss was driving went off the road and collided with a traffic semaphore in Baxter, Minnesota, striking the passenger side of the car and, in DeGree’s words, peeling off his side of the vehicle. When DeGree woke up four days later, he was in North Memorial’s trauma center, where he discovered the heavy toll of the accident.

“My leg was amputated,” said DeGree. “My internals had been rearranged, because when [the car] hit the semaphore, my intestines went through my diaphragm, went through the liver, and then my arm was broken. So all those were put back into place.” 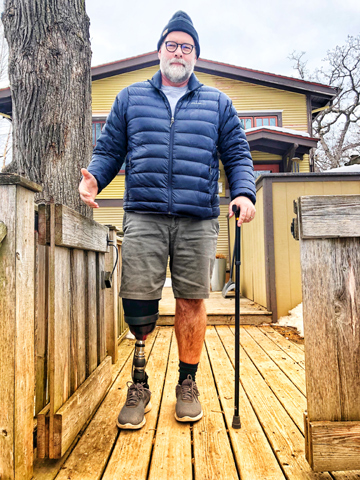 Longtime education advocate Tom DeGree has been steadily working on rehabbing his injuries from an October 2019 car accident. Photo by Dean Schlaak

DeGree remained in the hospital for 48 days, and he had to let his hip heal for a three-month period before he could be fitted for a prosthetic right leg, after which intensive physical therapy began.

It was certainly a bizarre new normal for DeGree, a former elementary school teacher turned administrator, a restauranteur with Schlaak, a former local political candidate, and a longtime pillar of the Twin Cities LGBTQ community. DeGree said that the toughest part was the first three months when he had yet to receive his prothesis.

“I was using a walker and a wheelchair, but I was still going to physical therapy,” he said. “I was always seeing a physical therapist in the hospital. But once I got out, I would [go to] Courage Kenny in Stillwater and I would do physical therapy, which is basically movement in my leg two days a week.”

DeGree also saw an occupational therapist to rehab his arm so he could regain his daily functions at home, as well as seeing a speech therapist and a trauma therapist to attend to his brain injuries received in the accident. DeGree said that because he was asleep during the accident and had no visual reminders of it, the use of his trauma therapist was just temporary.

“So we’ve kind of been able to just work on the physical therapy part,” he said. “And the mental part has thankfully not been a haunting ordeal.”

As of this writing, DeGree is still unable to go back to work, despite hoping to return to work in May. DeGree said that he was due to have a neuropsych evaluation of his brain injury, and another doctor expressed concerns regarding DeGree developing blood clots in his lungs because of his surgeries.

“So as part of my professional life, I have not been able to go back to work,” DeGree said. “I’ve been just basically working on physical health and getting my body back. COVID has thrown a wrench in this. And luckily, I got to the point where I could do some walking and do some of the pieces before we got locked down. But I went about three weeks without seeing a physical therapist. They give you a ton of exercises and I would do those daily by myself.”

Although his recovery somewhat slowed due to the current pandemic, DeGree is doing whatever he can to get better, and luckily he has an incredibly supportive husband at his side through it all, not to mention the love and support of his community.

“[Dean] did a fundraiser at the Eagle for me,” said DeGree. “He said it was one of the most packed nights at the Eagle… just because a lot of people wanted to show Dean and me support and also just be together.”

“There was a Caring Bridge that he had started, and it was getting over a thousand hits a day from people wanting to find out how I was doing,” DeGree continued. “I think that that showed that being a part of the community—via either schools or running for office, or just owning the business— [that] people were very concerned.”

DeGree asserted how lucky he was to have a network of support to find resilience and resolve in coping with his new normal, saying that the love of his friends and family pushed him to fight harder in rehabilitating his injuries. 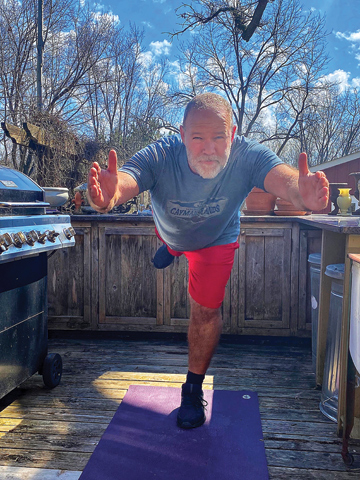 DeGree is using his new lease on life to become a vocal advocate for the disabled community. Photo by Dean Schlaak

“When the accident happened up by Brainerd, they actually had to helicopter me down to North Memorial,” he said. “At the accident scene, somebody was there who took his belt off and put a tourniquet on my leg. If all those pieces didn’t happen, I could have easily died.”

This realization not only gave DeGree a greater appreciation for life, but challenged him to do more to advocate for those in the disabled communities, just as he’s advocated for the LGBTQ community in the past.

“When the marriage amendment was happening… Dean and I were asked to speak on camera because people knew us from [our] business,” he said. “So now that I have a new community that I’m involved in, it’s important that I use that voice to support people who are like my niece, who’s had spina bidifa and been in a wheelchair her whole life.”

“I get to appreciate and figure out what she had to deal with,” DeGree continued. “And I get to also give her voice a louder voice because the fact of the platform that I already have.”