A Couple That Does Taxes Together, Stays Together 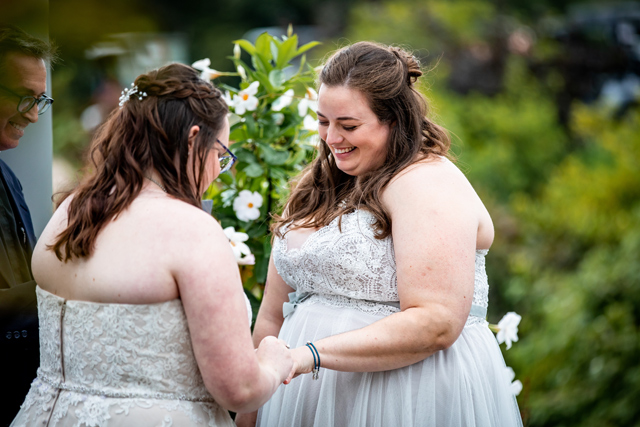 Laura Hoffer and Jennifer Fisk have a lot in common—from camping and hiking to accounting and volunteering, there’s little this happy couple doesn’t enjoy together.

Some argue that opposites attract, while others are certain that a match made in heaven is exactly that: a perfect match. For Laura Hoffer and Jennifer Fisk, the similarities couldn’t be more apparent. Both accountants, the couple work for United Healthcare and live in Eden Prairie with their three rescued Boxers and cat. The self-proclaimed tax nerds enjoy volunteering with Across America Boxer Rescue as well as hiking and camping—the two happily brag that they’re halfway through camping at every state park in Minnesota.

After meeting through mutual friends, Hoffer and Fisk had their first date at a pool near Hoffer’s house, followed by watching a few episodes of The L Word after Hoffer discovered that Fisk had never seen the show.

Though their love story started out in the sweet, romantic bliss of summertime, they found the romance in a bitter Minnesota winter (okay, spring), too. 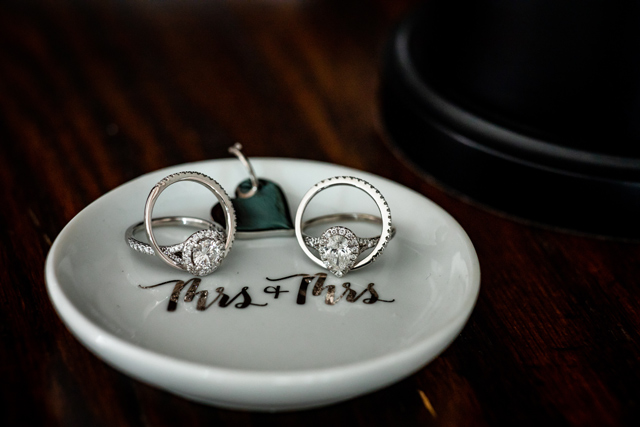 “We wanted to get engaged on tax day (as two accountants, this seemed like the best day), so we searched for an Airbnb to go away for the weekend. We stumbled across the perfect gay-friendly place (run by a lesbian couple) in Upsala, Minnesota,” Hoffer says. “It was during the epic April blizzard of 2018—we drove through whiteout conditions on I-94, but we made it to the adorable cabin and found a congratulations note and champagne from the hosts. All we needed to do was pop the question before we could celebrate.”

They were planning to wait until April 15, which was a Sunday, but Fisk was too excited, so the couple decided on things the old-fashioned way: over a game of cribbage.

“If Jen won, we’d have to wait until Sunday; if I won, Jen could propose that night. Luckily, the stars aligned, and I pulled out the win,” Hoffer says. “We took turns proposing and both said yes, of course. And then we opened the champagne and toasted to our next adventure.”

Hoffer and Fisk enjoyed a fall wedding at Olympic Hills Golf Course in Eden Prairie. “We were surrounded by our family and friends. Our three pups were front and center in our ceremony as our honorary best men and flower girl,” Hoffer says. “Marley even escorted Jen down the aisle with her brother, Brian.”

The couple celebrated their love with their close friends and family after the ceremony on the deck in warm September weather. The indoor reception followed, and everyone was pleasantly surprised with a frozen delicacy: Ben & Jerry’s ice cream.

“We ended our night with a sparkler sendoff and we drove off in Laura’s grandparents’ courting truck, a 1954 Chevy,” Fisk says. “I was in for a surprise when I found out that I had a special role in the getaway as our ‘light bearer,’ as the headlights didn’t work.” 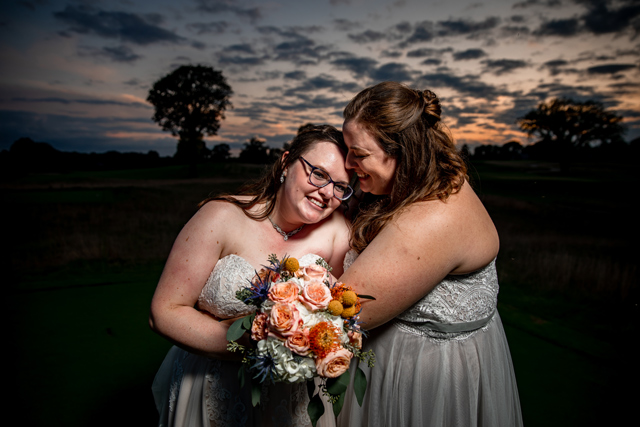 The couple drove home with Fisk hanging out the window with a giant flashlight while Hoffer navigated her first solo trip without instruction driving stick. “Certainly a memory we will never forget,” the couple jokes.

“We were both excited and nervous. I started out the day with an exciting lesson on driving the stick shift truck—while rounding a turn, the truck stalled and neither me or my dad could get it started. The only remedy was for me to get behind the truck and push it down the hill and then run to jump back in as it started,” Hoffer recalls of the morning of the couple’s big day.

The two are in agreement that the best part of the day was spending time with close friends and family, even though “it was a bit weird, as two introverts this is our biggest fear.”

“We both felt nervous about performing our first dance, even though we’d attended two ‘two left feet’ dance classes and practiced many times (we aren’t dancers at all, so this was a new adventure for us),” Fisk says. “Most of all, we both felt incredibly excited and overjoyed to be starting our forever together—there were more than a few tears from us during our ceremony and vows.”