2008: A Look Back Pivotal Year for Minnesota’s Leather Scene

For the first “Leather Life” column of 2009, let’s cast a fond backward glance at 2008. Yes, the last part of the year had its problems, among them worldwide economic turmoil and Proposition 8 in California. But before all that, for Minnesota’s leather community, plenty of good things happened. Years from now, we, and our community’s successors, may look back on 2008 as a pivotal year in some respects. 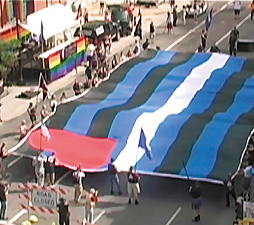 The Black Guard held its 31st annual Black Frost Run in spite of some last-minute logistical problems—the club had to expend so much effort dealing with a last-minute hotel change that it wasn’t able to present the traditional show during the run.

This year, The Black Guard will present Black Frost 32 February 6-8. The registration form promises: “Yes, we will have a show this year!” Plus games, a banquet, a bar tour, and a great bunch of guys to meet. Registration deadline is January 24. For details and a printable run registration form, visit www.blackguardmpls.com.

MSDB inaugurated a new series of monthly education presentations, The LAB. The first class was about wrestling. Topics since have included spanking, flogging, massage, and “holiday-themed play piercing.”

Minnesota Storm Patrol presented the club’s second run, Northern Xposure II, which had the distinction of having the spring Mid-America Conference of Clubs (MACC) meeting as part of the run. May also saw the 30th International Mr. Leather Contest (IML) in Chicago—unfortunately, without a contestant representing Minnesota. At the end of May, the Knights of Leather held its 20th annual Knights Tournament run, which attracted the largest crowd ever with a theme of kinky variations on fairy tales and cartoon characters.

The 2008 Minnesota Leather Pride celebration reached new heights, with a triumphant public unveiling of a new giant leather pride flag right after a tearful retirement/farewell ceremony for the old flag that made its first appearance in 1998. The ceremony was probably the most public leather event ever held in Minnesota—it even made the evening news on at least one channel. A video documentary captured the ceremony, along with some behind-the-scenes interviews.

The Atons of Minneapolis presented Gopher XVIII, its Close Encounters-themed run. That same weekend in Chicago, at the annual Pantheon of Leather Community Service Awards, Minnesota picked up an award (“Large Event of the Year”) for Leather Leadership Conference XI, held in 2007 in Minneapolis. Later in the month, a Minnesota Leather History roundtable discussion was presented at Patrick’s Cabaret.

The year ended with two traditions: MSDB’s Bizarre Bazaar and The Atons Holiday Fund-raiser. It also saw the completion of an ongoing project: the posting of the final podcast from Minnesota’s award-winning Leather Leadership Conference XI (only 20 months after the conference itself). A total of 20 episodes are available for listening on your computer, or downloading to your iPod or other MP3 player. The cost? Free. The value? Priceless. Find a link to the podcasts at <www.leatherleadership.org>.

Wow, that was fun! Let’s do it again in 2009! And how about having someone from Minnesota in the IML Contest this year?