Attendees of the Minneapolis Home + Garden Show will know main stage speaker Tyler Wisler from HGTV’s Design Star, but Wisler’s path didn’t always lead to interior design. Wisler entered college knowing he wanted to pursue art in some way, yet had no clear direction. Attending American University in D.C. (though he grew up in Hawaii), he discovered a degree program as unspecific as his career plans were: art design. 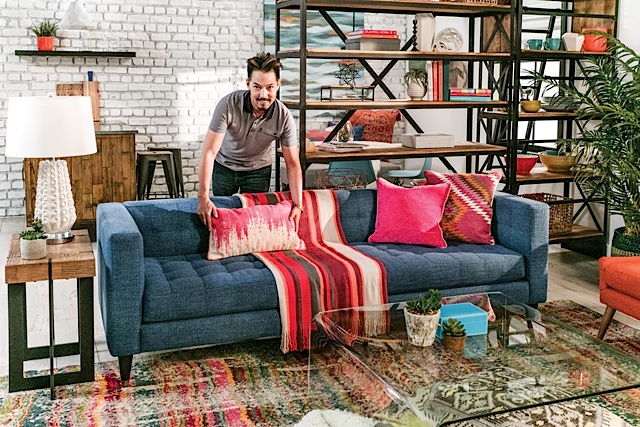 It was in the dorms that the notion of interior design struck him as a viable option, thanks to suggestions from friends pointing out how well-designed his room was. “It’s funny, because I don’t usually remember this tidbit,” he says. “But looking back at my time in the dorms, I had a full set of tableware. And I mean a full set of four: salad plates, soup bowls, and everything. I don’t know who I thought I was entertaining in a dorm room, but maybe that’s why my friends kept saying I should be an interior designer.”

After transferring schools to New York School of Interior Design (to receive a certificate) and graduating from Marymount University with a BA in Interior Design, he knew he had found his calling. Since then, he has been exciting people with his unique approach to tailoring environments through the integration of vintage industrial elements dovetailed with modern sensibilities. Now, with more than 16 years in the industry, Wisler has established himself as one of New York’s most influential and dynamic designers with an international clientele as well as appearances on Good Morning America and in the pages of Architectural Digest, Elle Decor, New York Spaces, and recently HOSS Magazine offered Tyler a position as one of their permanent celebrity contributors.

With the influence of fashion and an eye for juxtaposing classicism and contemporary elements, the talented creative isn’t timid when it comes to pushing the envelope to execute beautiful living environments. Describing his design aesthetic as “industrial luxe,” he says he personally gravitates toward things that are “darker, edgier, and sexier. I also like to throw a splash of gold in; I love the look of a luxe gold chandelier in contrast with an industrial table. That contrast is exciting to me.”

Yet when it comes to his clients, he puts his personal style aside; it’s all about making the client happy. He says, “What I do for clients is make sure they are in a space that represents them best. My personal style isn’t always what I create for them because at the end of the day they’re living in the space.” 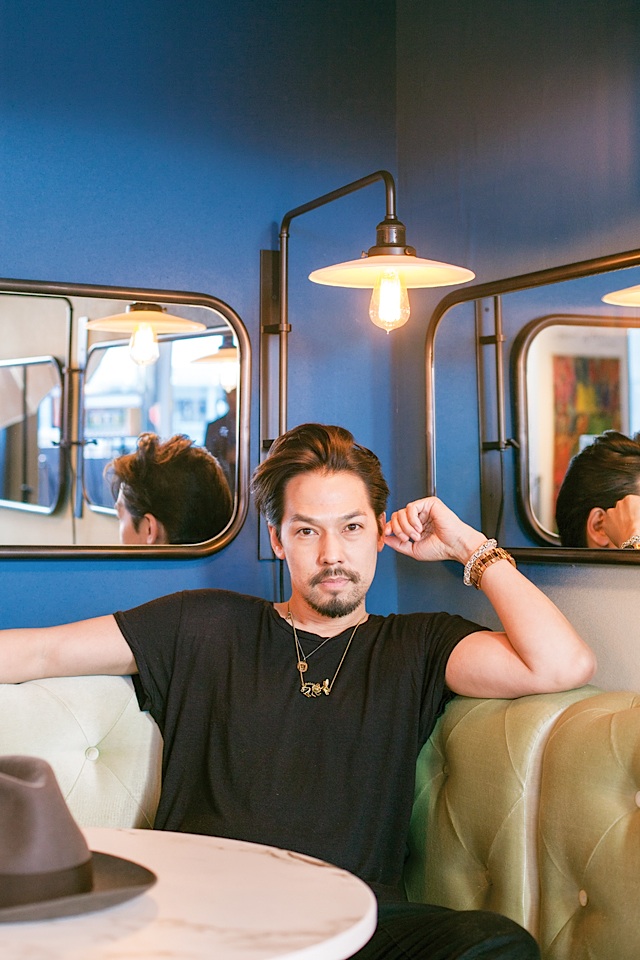 As such, he is proud of everything he’s designed with no regrets. “If the client is happy, I’m happy,” he says with a smile.

But he cautions homeowners: trend lightly. “You should pay attention to trends because they matter a certain amount in updating the space,” he says. “But don’t go overboard; I like to tell people to ‘trend lightly.’ In other words, incorporate trends and patterns in small ways that don’t cost a lot of money.”

He notes, for example, the current trend he identifies as an updated Golden Girls aesthetic: large palm leaves against a blush pink background that is taking the world by storm. Think about the potential for incorporating trends in a pillow or piece of art, he says, rather than wallpaper.

“When it comes to bigger pieces, stick with neutrals that stand the test of time,” he adds. “You might love that pink couch, but a couple years later you’re going to ask yourself what the hell you were thinking.”

Loving the Pantone color of the year? Instead of investing in a couch that isn’t as easily replaceable, Wisler is a firm believer in the area rug. Visually differentiating areas without putting up a physical border, he says, it can ground the space and add a visual pop, especially when layering floor coverings. 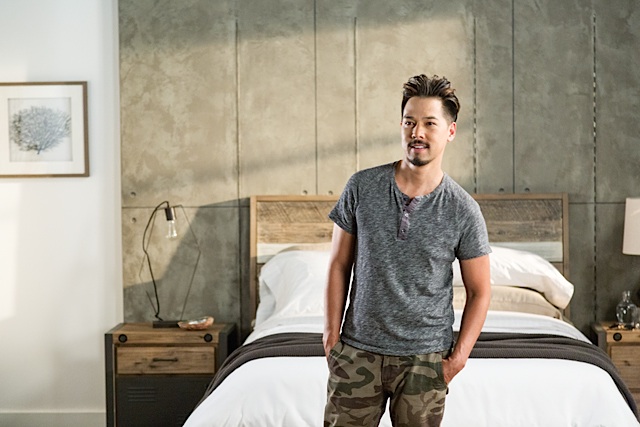 “Rugs are amazingly expensive,” he observes. “You look at the price of a large rug, say an 8-by-10, and it’s astounding how expensive it can be. So I always tell people to look for smaller rugs that they can use together and often the price of a couple 4-by-6 or 5-by-7 rugs is cheaper than the one big rug. Then you also get the chance to play with different complementary colors and patterns that you wouldn’t get with one big one.”

“Trend lightly” doesn’t just pertain to the amount of a certain trend to incorporate into your home; it’s also a caution against being a slave to trends. Wisler encourages clients to stay true to their own aesthetic and avoid trends or designs that aren’t a match, something that may seem like common sense but too many people seem to get bogged down by.

Anyone wanting to know what’s coming up in home design trends need look no further than fashion runways. “Fashion is always a step or two ahead of interior design just because it takes longer to manufacture interiors,” he says. “You can predict interior design trends by following fashion, but it’s a fine line because by the time they make it to interior design, that trend may be over and played out. You have to be careful.”

Companies have started to take note of how fashion can play into interior design. He has been sought out by not only the mega-online retailer OpenSky to be one of their taste-makers, but he is also an “eBay Influencer,” and a content creator for Skype. Most notably though, Wisler is a Pinterest “Pinfluencer” in both the home decor and men’s fashion categories touted by both Mashable and The Huffington Post as “one to follow.”

During the first weekend of the Minneapolis Home + Garden Show, Wisler will be taking over the main stage to discuss his design tips and designer do’s and don’ts to help attendees make their own space look like it’s had a designer’s touch. But for those not looking for an entire redesign, he suggests starting with lighting. 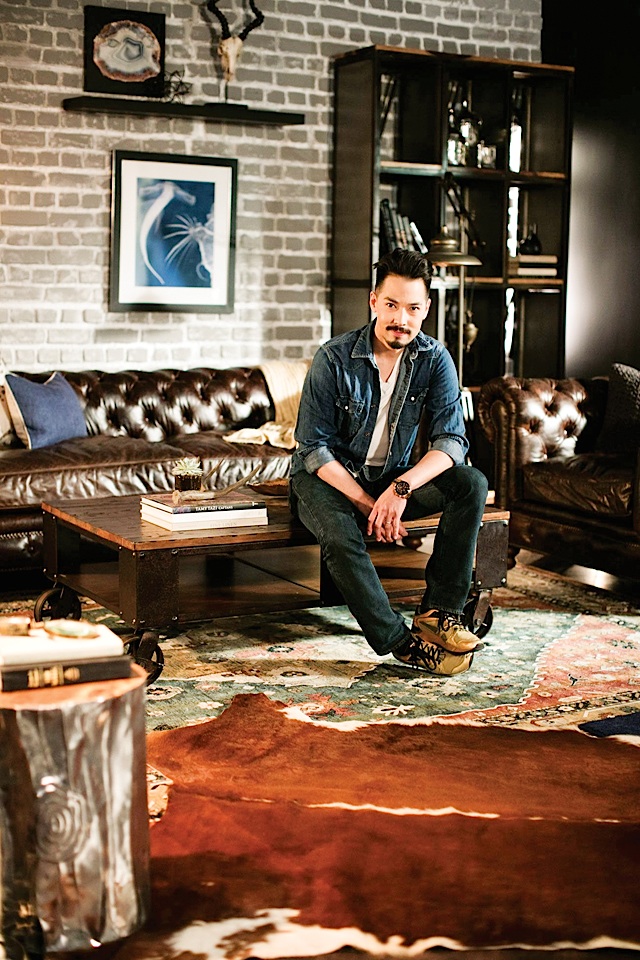 He is also a proponent of the old adage “measure twice, cut once.” Not to mention planning ahead and never jumping into a project. “I can’t tell you how many times I’ll be at the store and see people just staring at the wall of paint chips,” he laughs. “Just standing there staring and wasting time. They clearly spent no time thinking about what color family they’re even looking for. Do you want greens? Grays? Blues? Think about it and then go look at chips.”

And always, always make sure you’re using your budget wisely. “The best advice I can give is to use a professional for bathrooms and kitchens,” Wisler says. “People set a $20,000 budget for a kitchen remodel and think they’ll save money by doing it themselves. But then they find the cabinets don’t fit, they’re in over their heads, making mistakes, and eventually consult a professional. Suddenly they’re way over budget and realizing they should have started with a professional in the first place, at least with kitchens and baths, which are much more complex than people realize.”

Ultimately, Wisler’s advice is to have fun with your home design. “At the end of the day, design should be accessible to everyone.”

To hear more of Wisler’s home design tips, catch him at the Minneapolis Home + Garden Show the first weekend, Feb. 24–26. For a full schedule and to purchase tickets, head to www.homeandgardenshow.com.