The House That Mr. Form and Mr. Function Built

In 1981, Madonna went solo, men at The Saloon were dancing to Funkytown by Lipps Inc., and Donn Burleigh and Mark Heymans met at a Valentine’s Day party. They couldn’t have imagined then that they’d be getting legally married in 2013. They’ve spent the last 32 years building their relationship and careers, traveling, and making a home together. They bought a shabby, 1916, south Minneapolis bungalow 21 years ago and renovated it from top to bottom using their complementary qualities and talents. 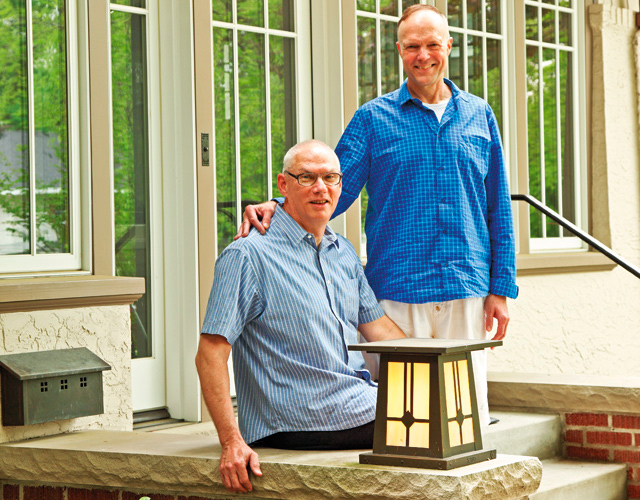 Their final major house project was to renovate the front porch which they used extensively . . . when Minnesota climes permitted. The light-filled space of the original open porch had been enclosed with ill-fitting storm windows, furniture placement was difficult due to the badly sloping floor, and it generally felt “dismal”. Mark and Donn’s first effort to replace the porch windows resulted in sliding windows that functioned better but didn’t fit the house’s architectural character.

They still wanted an enclosed, mosquito-free porch, but also a better designation of entry to the house, a warm year-round transition space between indoors and out, and a place to enjoy their morning coffee. They wanted the porch to resemble the original porch as much as possible, be more integrated with the house, and have larger, more welcoming stairs—like the original porch (as seen in the historic photograph of the house).

Mark and Donn made a good team to take on the decades-long, whole-house renovation. “We work great together on projects. We complement each other well,” Donn notes. “One contractor referred to me as Mr. Function and Mark as Mr. Form. He’s attuned to color and aesthetics, me to outlets and how the furniture fits.” When it came to the porch project, however, they turned to an architecture firm for the first time, as it “involved the entire front of the house and the approach to it, was the last piece in reclaiming the house’s historic integrity, and was our final project,” adds Mark. 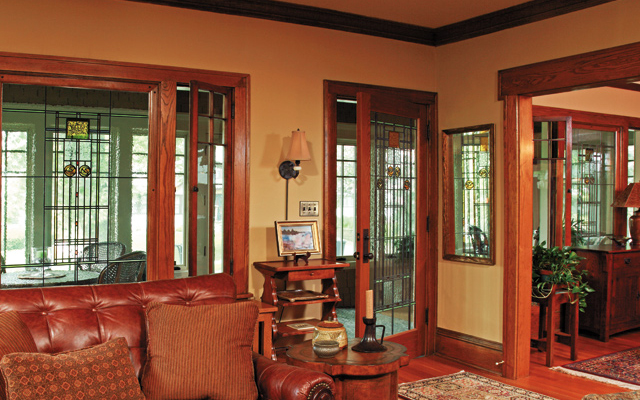 Art glass windows and full-view interior front door better connect the porch to the interior and bring more light into the living room.

They discovered David Heide Design Studio at the annual Twin Cities Arts and Crafts Show & Sale held in September at the state fairgrounds. “After talking to several other architecture firms, there was no comparison,” said Donn. “We chose the Studio because of David’s love of the Arts & Crafts style, enthusiasm, and knowledge of old houses. Most importantly though, David knew this was about us and our wishes—not about David. He was the expert to make it our project. And we loved the team—including Pat from Golliker Construction. It was a wonderful process.” Mark adds that “it was fun to work with David. He’d hear us and then come up with great alternatives to choose from.”

David Heide Design Studio is a 14-person, Twin Cities architecture and interior design firm that is highly regarded for its work with historic homes as well as exceptional contemporary new houses. David and designer Chris Christofferson say “Mark and Donn were a blast to work with.” “Their enthusiasm in pursuit of historic integrity was an inspiration,” says Chris. David says his background in preservation has taught him to listen to the house. “Our goal is to make it look as if we hadn’t been there while creating a comfortable, timeless, and seamless project.” 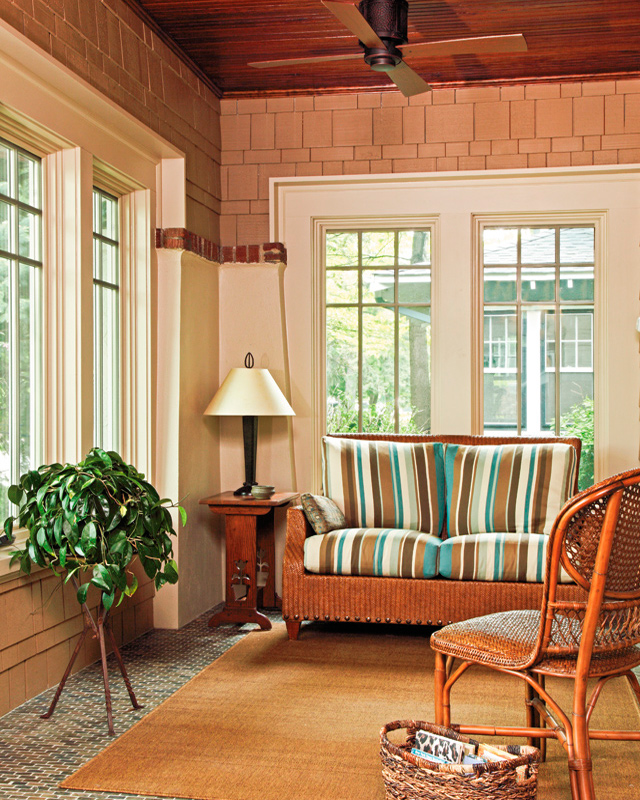 The porch accommodates a seating area as well as informal dining that Mark loves to use for his studies.

The porch’s roof and exterior walls were retained but the remainder was completely renovated. New windows were installed, matching the head height of other windows on the house. Custom windows and doors were designed to replicate the design of the house’s original casement windows. The slate mosaic floor is heated, making for toasty winter-time toes. The original beadboard ceiling was restored. New exterior trim above the door and windows was designed to recall the scale of the original porch opening. The new, full-view, interior front door, with locally-crafted art glass, better connects the porch to the interior and brings more light into the living room.

Mark and Donn are delighted with their renovated porch and use it every day of the year. Michael Crull, an interior designer at the Studio, and David’s partner of 16 years, provided the interior design for the project. “It’s a favorite gathering spot when entertaining. We love the furniture that Michael found for the porch.” Mark says “we would definitely hire an architecture firm—and David specifically—for another major project rather than going it alone. The Studio anticipated and designed all details, which made the construction process so smooth. Chris and David worked with the contractor throughout construction on our behalf. David knew how to make the historic photograph of the house and porch come to life.” 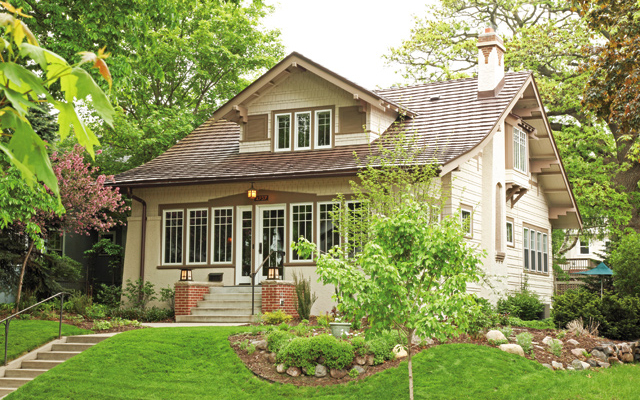 When house shopping in 1992, Mark and Donn almost passed by their home of the last 21 years. After a long day of looking at houses, the “dog of the block,” with crumbling steps, aluminum porch windows, and gunmetal gray stucco, became their new home. Mark, Mr. Form, fell in love when they stepped inside. The house “had good bones but had been neglected,” he said. “Mark’s an emotional buyer and I’m not,” says Donn, Mr. Function. “He really wanted it but moving here was hard for me.”

As soon as they moved into their fixer-upper, however, Mark’s enthusiasm faltered. “He really went into a depression. Everything was horrible,” says Donn, “so many things needed work.” Mark wanted to sell and move but Donn resisted. Mark remembers that “our first house was very attractive and my grandmother couldn’t hide her displeasure when she first saw this house. She was clearly disappointed and thought we had lost it!”

“We have redone and touched virtually every surface in every room,” Mark recalls. “Everything is so different now from when we moved in. We were itching to really make a house our own. We wanted this one to be reflective of us, welcoming, not a showplace but comfortable and cozy. We’re nesters and we appreciate the aesthetics of older houses.”

Mark and Donn have created warm, inviting, comfortable spaces throughout the property, from the bright front porch to the lower level guest suite, and from the master bedroom’s new window seat to the back yard garden patio under a huge, sheltering oak tree. The kitchen, which they’ve remodeled twice, was designed by Donn, Mr. Function and the primary cook. When they bought the house, the walls of the entire kitchen and breakfast area had diagonal barnboard siding—along with blue cabinets and ‘horrible lighting’. The upstairs office, which Donn and Mark often use simultaneously, has two desks nestled together. 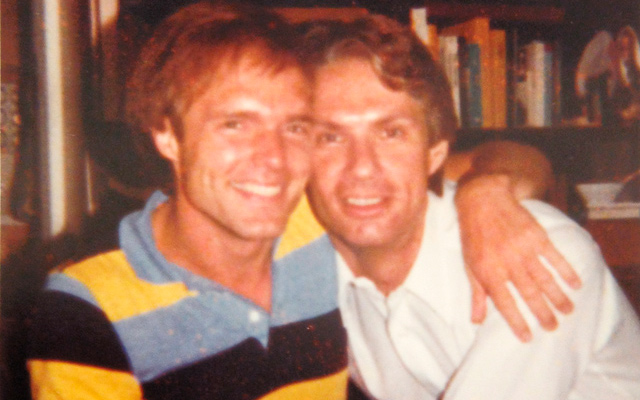 Mark and Donn, not long after that Valentine’s party, Spring 1981.

Mark picked Donn’s name on a valentine upon entering a mutual friend’s party in 1981. He was charged with finding and talking to him. And talk they did—the entire evening. They started going out shortly thereafter and moved into an apartment together November 1st, which they consider their anniversary. Mark and Donn were 30 and 34 when they met—32 years ago.

During these years, Donn had a 30-year career as a technical analyst in corporate information systems while Mark’s career in corporate communications was enriched by dancing in several companies and shows into his early thirties.

Mark and Donn are not sure yet what their specific plans will be for their legal marriage on their upcoming anniversary. They had a commitment ceremony on their 20th anniversary in their home, performed by a “very liberal” Catholic priest. “I’m glad you’re finally married—in the church,” Mark remembers his mother quipping.

They have already had a symbolic wedding, they say, and for many years have considered themselves to be married. They have all the legal protections gay couples can at this point—powers of attorney, living wills, and partnership agreements.

Mark and Donn see their upcoming marriage “as strictly a legal and civil matter.” Donn adds that he wants to do it to have all the legal protections and rights of marriage, some of which can’t be covered otherwise, such as taxes and inheritance. “For me, it’s purely legalistic but, when the day comes, I’m sure I will be moved,” Donn suggests.

“I’m excited for all the people who will be united for the first time. And let’s hope federal recognition is not far behind,” Mark adds.

They never imagined they’d be legally married, says Mark, “but we’re so gratified our home state is progressive again. It’s empowering. My parents want this for us.” 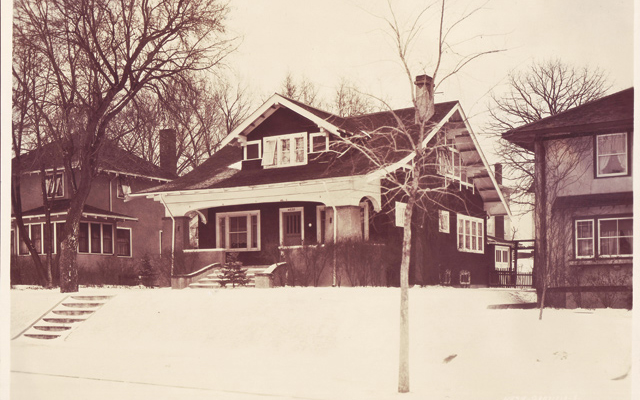 Donn, 67, and Mark, 63, both retired two years ago. Mark, Mr. Form, is now in graduate school at the U of M’s Center for Spirituality & Healing to earn a certificate in health coaching. He’s looking forward to working part-time, directly with people, in a highly creative endeavor. Donn, Mr. Function, volunteers at Mount Olivet Careview Home teaching residents and staff how to use new computers.

They have indeed created a lovely nest for themselves, friends, and family. How long might they stay in the house? “As long as possible—until I can’t go up the stairs,” says Donn. Mark observes that “we consider ourselves the stewards, not owners, of this house and parcel, and it feels good to renew it for the next 100 years. We love this place and care about it deeply. A few years after we bought the house, a neighbor came by on Halloween to say ‘You have made this house blossom. Thank you.’ I will never forget that,” he adds with emphasis and a pause.

The renovated porch and house are a manifestation and reflection of the complementary Mr. Form and Mr. Function and their relationship—warm, comfortable, inviting, and collaborative. They are the emotional and rational, the dancer and the computer programmer. Theirs is a house built with yin-yang—a dynamic system in which two complementary forces interact to form a whole greater than the separate parts.

Has their neighborhood been receptive to a gay couple? “Oh god yeah. Completely. Nothing but support from everyone on the block,” they exclaim. “We love this neighborhood and our neighbors.” A 93-year-old neighbor across the street left Mark and Donn a phone message when the Minnesota Legislature approved a marriage equality bill last month. Her message: “I’m so thrilled for you two.” 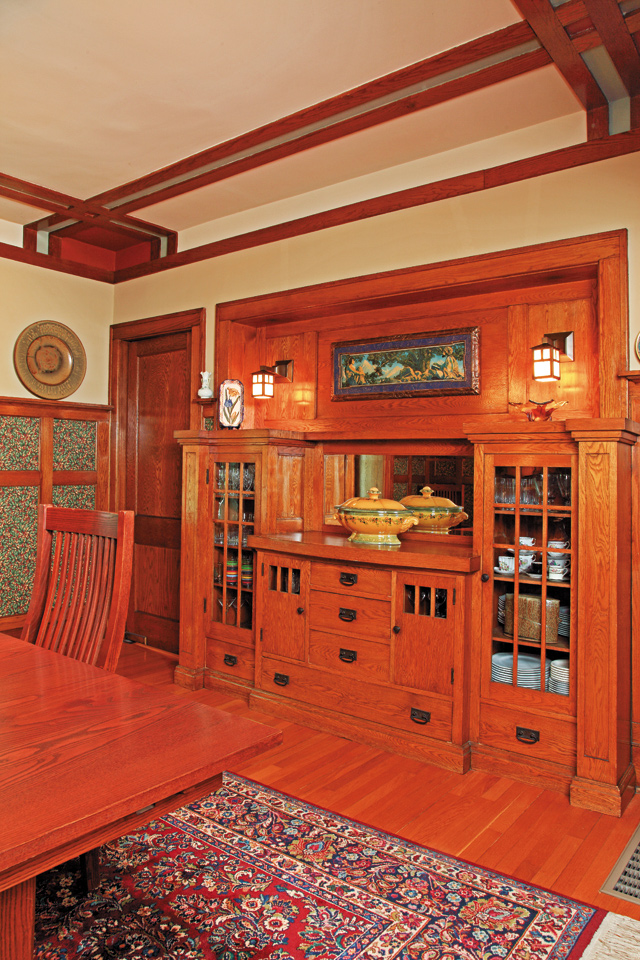