The Glitter Knitter Is Taking Over

StevenBe has become a brand. It’s a lifestyle. From yarn to coffee and tea, and now a reality show, the StevenBe team has turned Steven Berg’s yarn shop and fiber arts studio into a city (and national) treasure. 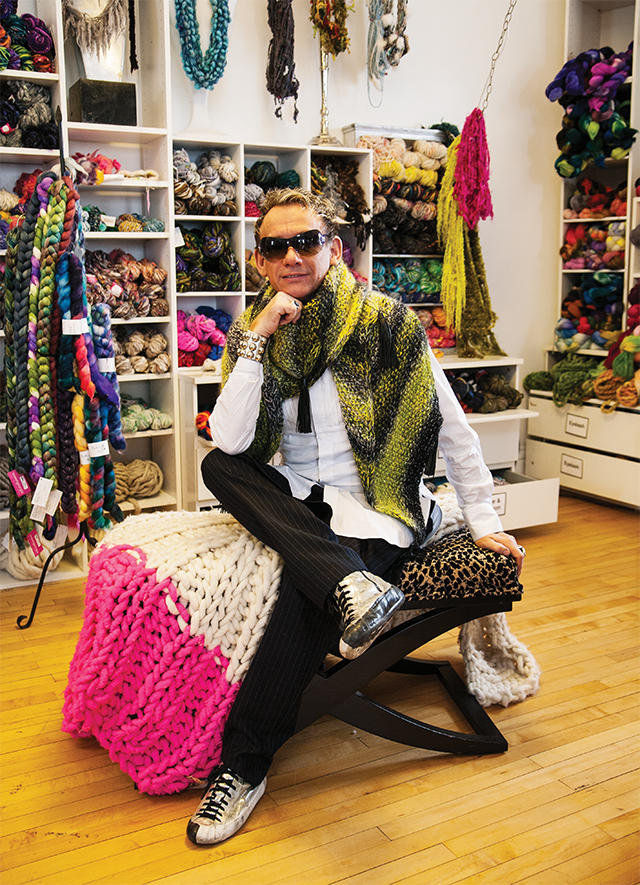 Steven is a fiber artisan who is armed with a wealth of experience, a daring sense of style, and a firm belief in the transformative power of creativity that knitting or crocheting offers to all who are brave enough to push the boundaries.

“For me, knitting and crocheting and needle art is a technique to create my art and craft that I’ve learned and now have taken to an art form,” he says. “So fiber, yarn, wool, all that is my medium. It could be oil, it could be acrylics, it could be bronze for sculpture; I just happened to choose fiber arts.”

Steven began his career early as a young boy, furiously knitting lines of sequin dresses for his discerning clientele of dolls in Wisconsin. He has his mom to thank, as she gave him knitting needles and taught him to knit at the age of four in order to occupy him.

“My mom is my best friend and she is a very hard German lady, just work til you drop dead,” Steven says. “She’s 83, still has her own yarn shop, still runs it herself. And of course, every time, she was my financial benefactor, any time I had a new hairbrained idea she’d put up the cash. She was always there whenever some hairbrained idea failed, she was there to rescue me.” 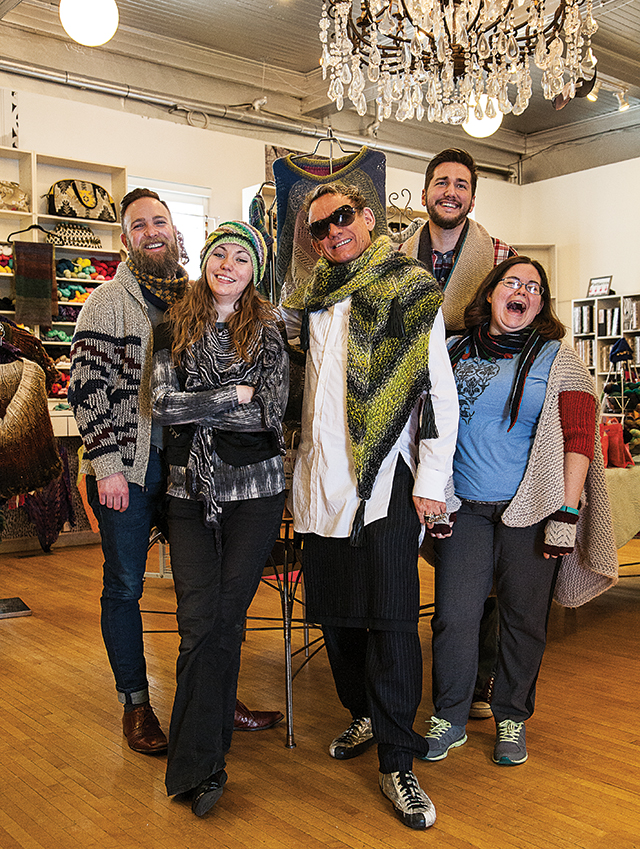 Knit, crochet, and macramé got Steven through high school and he saved enough money to pay for his first year at Minneapolis College of Art and Design. After two years at MCAD, Steven packed his bags for New York as a star student at Parsons and the Fashion Institute of Technology.

“When I got a job out there I was like, ‘Crap. I’m not making much and this is expensive to live here,’” he says.

His creative work experiences brought him back to his favorite medium again, the one that always inspired him the most, the imaginative world of fiber arts. So he came back to Minneapolis and opened up shop in the Galleria with a collective of designers. But it wasn’t long before the corporate world came looking for him. He was hired by St. Croix Knits in 1984 before being taken in by Munsingwear as a golf designer.

“I knew nothing about golf, except that it was ugly,” Steven says. “So I tried to fix all that. I did that for 20 years. And then I was kind of retired and wanted to open my own business and that’s what I did.”

Steven’s first shop was in Rosemount. The Yarn Garage was a little boutique shop. “I did it so it was this quiet, little shop I could retire at and kind of stay off of the radar…and just I can’t do it,” he says. “It’s like I always have to do big, bold, over the top, and that’s what I’m known for.” 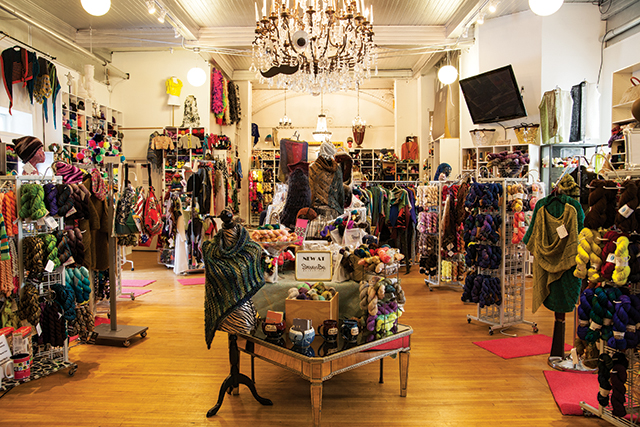 Steven Berg bought the building to house his yarn shop mostly because it could handle his giant chandelier.

In an 1800s restored firehouse in South Minneapolis, among a treasure trove of objects devoted to the fiber arts, is where you will find Steven today. From the StevenBe storefront, Steven’s knitwear designs of “chunky funky” creations have caught the attention of Hollywood celebrities and stylists.

“So I’ve kind of come full circle,” he says. “You know I was VP of Perry Ellis at one point and did all that corporate stuff for 20 some years and in ‘98 just walked away and said, ‘What am I going to do with myself now?’ And it’s just so transformed me back into who I was.”

Indeed, Steven has returned to what he calls the most imaginative art in the world: fiber arts.

“It’s so malleable, manipulative, you can just do anything with it, and you can change midstream,” he says. “And it can be utilitarian, it can be fashion, it can be just fun. There are just so many aspects of it, and one person can do all those variations. Whereas, the other arts…you’re an oil painter, you just do oil and canvas. Or you’re a sculptor and you do bronze. Or if you’re into jewelry and you do semiprecious settings. You kind of get into your one look. And this, fiber arts, you can do one thing tomorrow and something else the next day and it’s all totally related. I don’t think that this art gets as much credit as an art as some of the others. It’s considered kind of grandma crafty.”

Which is exactly why Steven decided to do a reality show. In fact, Steven’s been working on making it happen for at least five years, figuring out how to pull it off.

“I remember I did a little blurb once and I sent it in and the response was like ‘Oh yeah, this is cute, but the public still thinks of knitters as grandmas in rocking chairs and Birkenstocks,” he says. “And I said fuck that. I wanted to change that.”

Lucky for Steven’s dream, a producer who dabbles in knitting wandered into the South Minneapolis storefront, fell in love with what she saw, and raised $90,000 through Kickstarter to fund the initial episodes. With episodes set to feature the Pittsburgh Steelers, a shirtless cowboy, skydiving, and more, Steven is certainly reshaping the image of knitters in the public sphere. Currently a web series (www.stevenbe.tv), Steven says there are multiple networks interested in bidding.

Adding to his brand, Steven has partnered with a local family that has a few coffee trees in Honduras; he buys their beans and roasts them once a month. He even released his own gourmet teas, including Glitter Time Tea, which has a shimmer of edible glitter. But he’s not stopping there; Steven is currently working on his own wine, adult beverages, and chocolates.

“I believe StevenBe is a brand. It’s not just me anymore; it’s a lifestyle,” he says.

Of course, anyone who earned the designation “The Glitter Knitter,” was bound to evolve into an entire lifestyle brand. It began shortly after Steven opened his first shop in Rosemount; he’d been in business less than two years when a client who moonlights as a freelance writer sold a story about him.

“I had nothing to do with it, never saw the title. And the article was ‘The Glitter Knitter.’ I was like, ‘Oh, my god. That’s not how I want to be remembered.’ And then it just stuck. And people call me that, and I got known for that. And I used to go and do a lot of public speaking in the schools, like follow your dream and make your hobby a career and that kind of thing. And that’s how they always billed it. And so it stuck all these years.”

In the beginning, Steven says it referred to his personal style of sparkle, glitter, and sequins. But now, “Glitter Knitter” is a title that he wears proudly, meaning to take something further than expected.

“And that’s kind of my mantra,” Steven says. “The Glitter Knitter, it’s not just sparkle and sequins, it’s just taking anything a little bit further than it was intended to go and add your own creativity and art and make it special. It’s a transitive verb, to be StevenBe’d. ‘That’s been StevenBe’d.’”

That philosophy makes its way into his knitting, as well. “Traditionally knitters come in and they see a pattern for a sweater and they’re like, ‘I want eights blue skeins of yarn to make this sweater,’ and I don’t do that. The way I teach and promote knitting is buy the things you like and then we’ll incorporate them into the project. And if it’s too boring then I’ll add a random row of sequin it it, just to give it a pop. So all my stuff is unique in that way. Kind of sneaking them in, unexpectedly. Because I have a very short attention span, so my stuff is done for immediate gratification and pop culture. It’s just like start it now, finish it now, wear it now.”

Steven reminds all fiber aficionados: “The possibilities are endless. There are no mistakes, only variations.” Knitting or crochet is for everyone, with The New York Times reporting a significant portion of millennials taking up the hobby. Whether having something to occupy dull hands while binge watching the latest craze on Netflix or making it more social, there is a project and fiber for everyone.

“There are so many great YouTube videos now to learn,” Steven says. “And it brings people together that wouldn’t come together otherwise. So I’m working on an app right now, a social knitter app. It’s going to network people that do what you do and like common interests. Say you’re a knitter that likes to drink wine and loves cats; you’ll be able to find other people. It’s like knitting dating or something.”

The only thing that Steven says is comparable to the instant camaraderie of knitters and crocheters is animal love, using people that like dogs as an example. Typically, when passing someone on the street, both parties just keep walking, often without so much as a word. “But if someone is walking a dog or something you’re going to notice the animal,” Steven says.

“You might even stop and talk to it. If you both had dogs, forget it. You’re instant friends and you go to the dog park and your dogs are frolicking. And knitting is that same way. It dawned on me once; I was sitting in an airport and I was working on a project and this lady comes up to me, she says here, I went to Starbucks and got you coffee because I knew you were intent on your project and probably didn’t want to get up. But it’s that kind of thing, that just your average people in coexistence don’t bond, and then knitting brings them together.”