Tapas with Ross Sveback at the 2013 Home & Garden Show

It’s the time of year when the Minneapolis Home & Garden Show rolls around–you know, the season that’s a bit more cold and grey than we’d like…so we start daydreaming about when we can plant things and renovate and change up our surroundings. For inspiration, we turn to the Home & Garden Show that is taking over the Minneapolis Convention Center February 27 through March 3. Attendees can wander the displays and fill their bags with brochures and swag while watching presentations by celebrities like Todd Davis of “Design Star,” Nicole Curtis of “Rehab Addict,” Chef Chris Crary of “Top Chef: Texas,” Sasha Andreev of “Decorating Cents” and “Curb Appeal,” Rachel Kate of “Design Star,” and Christopher Straub of “Project Runway.”

Speaking of celebrities, our own Ross Sveback will be at the Home & Garden Show’s Kitchen Stage at 4pm on Thursday, February 28, demonstrating how to make two types of delicious Spanish Tapas. Ross and his work and wares have been featured in People Magazine as well as on KARE11 this past month, in addition to previous attention from VOGUE and the Star Tribune as well as numerous television appearances on WGN in Chicago. You can hear his “Elevating the Everyday” podcast every Wednesday on LavenderMagazine.com, but you can also sit and watch his cooking demonstration (he’s informative and so very entertaining) and enjoy some samples of his fare at the Home & Garden Show. Then, make them yourself, using these recipes. 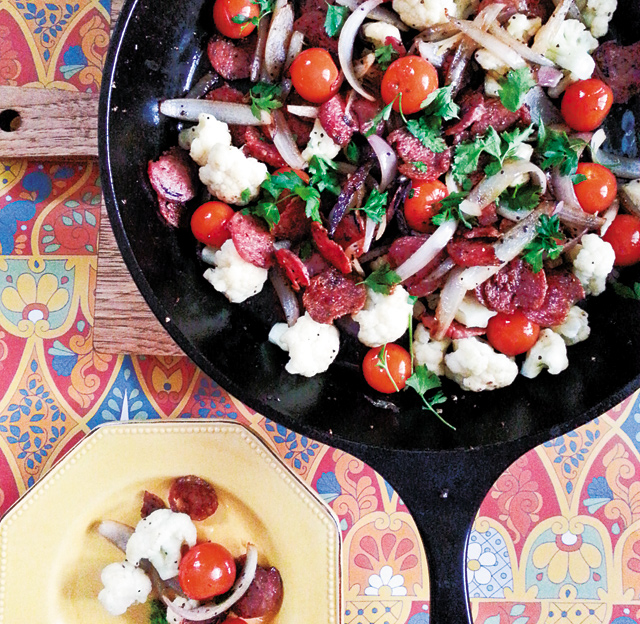 Sopressata with Cauliflower and Tomatoes. Photo by Ross Sveback

Sopressata with Cauliflower and Tomatoes

Spring and summer entertaining should be easy and full of bright flavors to go along with fantastic friends or family. Ordinary cauliflower is paired here with the bold flavors of Sopressata, a spicy, dry-cured salami originating in Italy but readily available at most supermarkets today. I slice the Sopressata thinly on my mandoline, feel free to cut it any way you like. These are paired with sweet cherry tomatoes and red onions. This dish is quick to make and beautiful to look at. The key to this dish is to make it and set it out for guests to enjoy all night long as it is delicious warm or at room temperature. I like to make it in a large cast iron pan and set it out family-style for guests to nibble on.

I blanch the cauliflower beforehand (even a day before is fine, just pull it out a half hour before working with it to have it come to room temperature so as to reduce cooking time). NOTE: This recipe calls for Sopressata, but you can used any dry-cured salami or Proscuitto, I prefer the heat Sopressata gives.

In a large skillet (I prefer cast iron), heat olive oil and black pepper until it has a sheen. Add Sopressata and fry until it browns, then add onion and sauté for five minutes. Add tomatoes and cook for a couple minutes, until skins begin to break then add cauliflower and stir gently to combine; at this point we are just trying to warm up the cauliflower. Remove from heat, sprinkle with parsley, serve, and ENJOY! 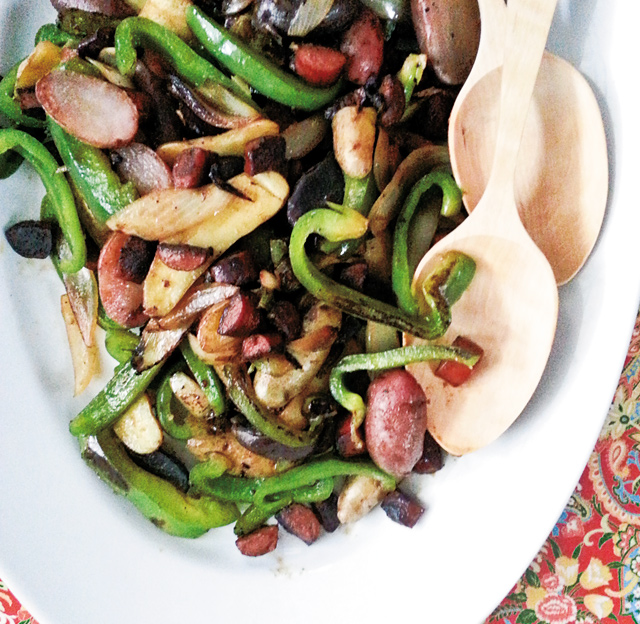 Potatoes with Pepper and Chorizo. Photo by Ross Sveback

Potatoes with Pepper and Chorizo

This is another one of those standard dishes that I love to make to feed large crowds of people at a table. It allows me to make one big dish and enjoy the company that I have over. The potatoes are a great base for the full flavors of the jalapeños and Chorizo. I use fingerling potatoes as I like how they make the finished dish look.The green pepper and onion turn sweet. Your guests will be digging into this dish with all their fingers.

Heat oil in a 12-inch heavy nonstick skillet over moderately high heat until hot but not smoking, then sauté jalapeños with salt, turning occasionally, until browned and just cooked through, roughly five minutes. Add Chorizo and cook until well-browned, roughly five minutes. Then add onions and green peppers until they begin to soften, then add the potatoes and cook until they begin to brown. Pour wine over dish and give it a good stir, then serve.

Go to the Home & Garden Show website at www.homeandgardenshow.com and download your Transit Pass from MetroTransit to get free rides to and from the Convention Center via bus or lightrail