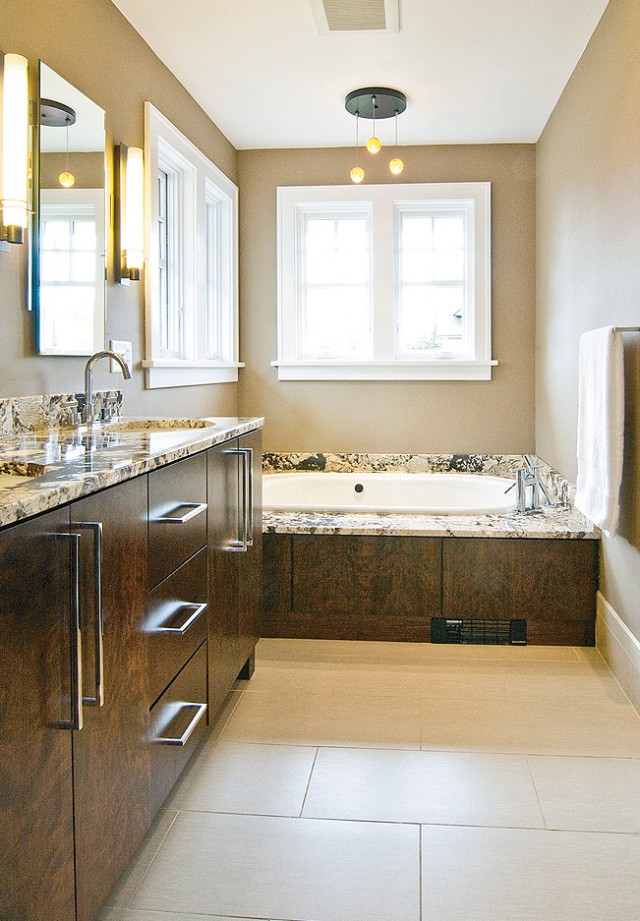 Robert and Kevin wanted a modern sanctuary that fit with their historic home. Photo provided by Castle Building and Remodeling Inc.

Spring is here, and it’s the time for change and renewal, especially around the house. Big or small, luxurious or practical, any home project requires careful planning and a lot of creativity. But if thinking about the remodeling process makes you want to hide out indefinitely in that dark unfinished basement, remember that countless other homeowners have successfully turned drab spaces into absolute sanctuaries. The following three projects are great examples of what is possible with a well-laid plan and a great crew of designers and constructors.

What started out as a side yard with too much overgrown vegetation became a summer house fit for kings. Homeowner David Heide (Owner and Designer at David Heide Design Studio) and his partner, Michael Crull, loved their Prairie School style house in St Paul, but they wanted to create a space to enjoy the beautiful weather.  They decided to add on and make a summer house, an enclosed structure similar to a porch that stands separate from the main home.

The couple decided to build the summer house in order to address several different problems.  “Our original intent was to enclose the addition with screens, but we realized that we would be on our porch looking at the neighbor’s home. We wanted to redirect the point of view back to our home.” Opting to build an additional structure instead of working with a traditional porch addition allows the pair to socialize and relax while enjoying the beautiful view of their own home. Another benefit of creating the new structure was an added sense of privacy.  The pavilion screens the neighbor’s view, which originally looked directly down into David and Michael’s yard. 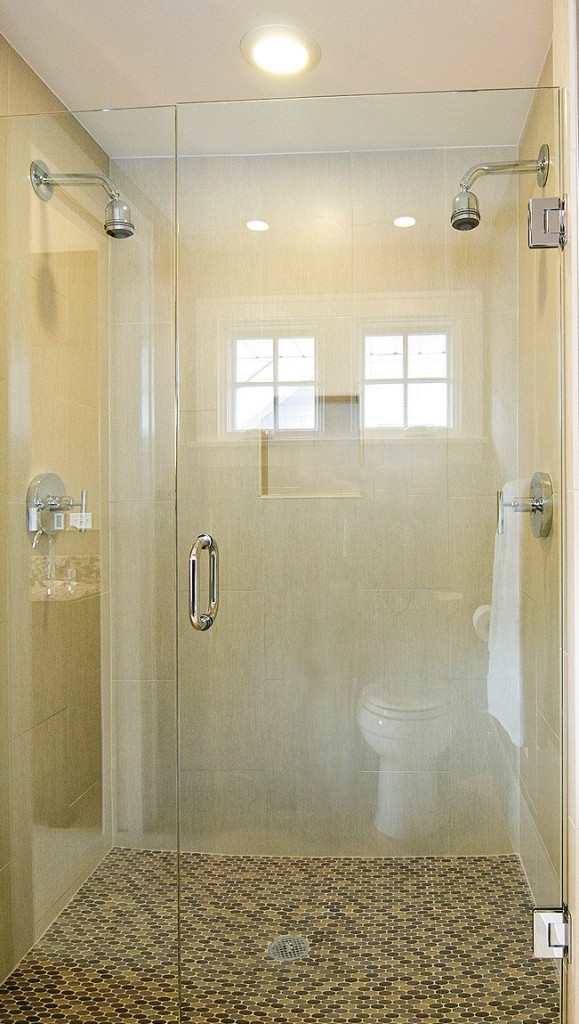 David and Michael first began by defining the space in the yard where they wanted the structure to be. They discussed the location and size of the summer house in relation to their existing home and finalized what they wanted the space’s function to be. David then drew up sketches of their ideas and discussed the plans with several contractors in order to check the reality of the pricing. The couple also planned a budget at the beginning of the project, and David notes the importance of “working in reality from start to finish” when it comes to finances. Construction took place over the course of the winter with the contractor working at his own pace. The contractor brought all the wood used in the project to the home already cut and painted.  All that needed to be done after the actual construction of the structure was finished was to do one more coat of paint on the trim.

As both a homeowner and a designer, David has quite a bit of advice to offer to homeowners looking to tackle remodeling or construction projects of any size.  First, he suggests to “design content and budget at the same time.” Having an established budget from the get-go will allow you to focus on plans that are financially feasible.  If you can’t afford to remodel the whole home, David says to “take things into smaller bites, break things into phases.”

Next, David suggests to “look for the right person to do the job at hand.” Look for someone who has the right credentials for the job you need to have done. David says, “your brother-in-law may come cheap, but he might not be the least expensive in the long run.” A little extra money paid for a job well done will inevitably be worth every extra penny. If you aren’t comfortable designing your new spaces, hire design professionals. “You get what you pay for, and in the end, it’s ultimately worth it.” On the contrary, David warns against hiring overly qualified individuals to do simple tasks. David jokes that “you wouldn’t hire Michelangelo to paint your bathroom ceiling.” 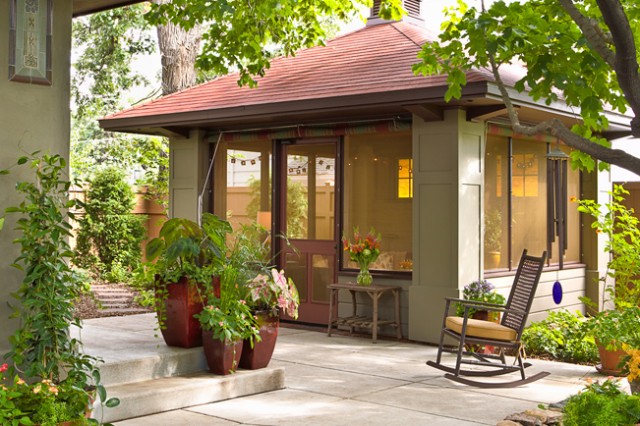 David and Michael can relax and enjoy their gardens and home in the privacy of their summer house. Photo by Susan Gilmore

Finally, David touches on one of the most popular home renovation trends—“green” designs. He notes that “there’s nothing greener than good design. Good design transcends trend and style. You can fill your cart with green products, but if it’s an ill-thought out project, there’s nothing green about it. It’s just going to end up in a dumpster in five years.”

David and Michael believe that one of the biggest benefits has been “the improved relationship between us and the yard and gardens.” The couple can now enjoy their own space and admire the beautiful gardens created by Rocky and Scooter, two people who have worked diligently with Heide for several years. David notes that the space feels like “our sanctuary; it’s like our cabin, but it is 20 feet out the back door and not two hours down the road.”

For Robert VanDulles and his partner Kevin, a new addition to their 95-year-old home created a master bathroom that was part of both the old and new structures. With help from Castle Building and Remodeling, Inc., Robert and Kevin were able to transform a rough skeleton of sheetrock, insulation, and plumbing into what they now consider “a retreat” in their home.

Robert notes that they wanted to create a complete master bathroom “reasonably economically” with a “modern feel that still fits nicely into a historic home.” They began by doing extensive research online and in magazines for styles and trends, and they also toured new condos in the downtown Minneapolis area in order to get a strong sense of what they liked. When they figured out their desired style for the bathroom, they asked friends and family members for suggestions of remodeling companies. Robert recalls that they “interviewed five companies to compare bids, then we narrowed it down to two and checked references for everyone involved. Because the price was close between the companies, it was more of a personal decision as to who we felt most comfortable with.”

The best part about the project for Robert and Kevin was working with Castle Building and Remodeling. Robert recalls that “the crew was professional and had a positive attitude, and Loren Schirber [Castle’s Owner and Business Manager] was engaged in the project the whole time.”  The courtesy and professionalism the couple experienced when working with Castle made them feel very comfortable with the people who were going to be in their home.

The project didn’t go perfectly, however, due to issues with faulty hardware. Robert and Kevin purchased the fixtures and hardware several years in advance, and they were surprised to find that their purchases didn’t stand the test of time.  They ended up redesigning the bathroom and using all new materials—a decision that truly paid off. Robert’s biggest tip is to avoid purchasing any materials until you know with certainty that you have a final design.

Robert also suggests that homeowners ask a ton of questions, especially when it comes to choosing a company to work with. “Check the references of everyone, including subcontractors. Don’t be afraid to speak up and ask questions—you want to feel safe and secure in your home!”

Not all projects have to be huge renovations—Tom Thorson wanted to turn his unfinished walk-out basement space into a loft-style studio for his landscape architecture business. He needed a place to paint, draw, and spread out his work, and the lower level of his home was absolutely ideal. Tom decided to go for an “industrial loft” feel by keeping the ceiling ducts and pipes exposed, as well as not covering up the concrete floor. Along with a studio area, the basement holds a lounge area complete with a cozy fireplace.

Tom designed the floor plan himself, but he went straight to Vince Cronje and Jeff Ertl at Pro Home Renovating. “I went right to them. They get the job done the way I want it done. Aesthetics are important to them.” The space didn’t need to be overly finished; it needed to be functional. Tom adds that the space “is perfect for my needs.”

Tom has a few suggestions for people looking to re-envision a space like he did with his basement. First, he suggests people “speak to designers if you aren’t comfortable doing it yourself. That is money well spent because it will save you tons money on problems and errors.” Also, it’s best to plan out options on paper first. Having succinct plans makes initial estimate discussions with contractors easier. He also warns that “it’s not always the lowest cost you receive that you should go with.” Instead, Tom suggests that homeowners “get with a contractor that understands exactly what you want to do.”

Another idea that Tom suggests is to think about how a space needs to change in order to make it functional. “People don’t use a space in their homes because it’s not up to the level of the rest of the house, but there are things you can do to make a space functional.” One big mistake that people make is assuming that each area of the home has to be up to the same level of finished perfection as the rest of the house. Tom’s loft-style basement is a perfect example of how to renovate in order to make the most out of an otherwise unusable space.

Pro Home Renovating knew exactly what Tom wanted to achieve with his project, and Tom is more pleased with the results than he thought was possible. “I didn’t want it to be a pretty space—I’d say it’s handsome, comfortable, and practical. It’s a good way of dealing with a space that doesn’t have to have a higher level of finish.”

Whether you’re looking to spruce up an old space or build something completely new, the main thing is to plan ahead. Think about your budget and your goals, and find a contracting company that understands your project and is able to see it through.  With a little bit of creativity and communication, your home can become your personal paradise you may never want to leave.