Southside Vintage: A Showroom of Stories 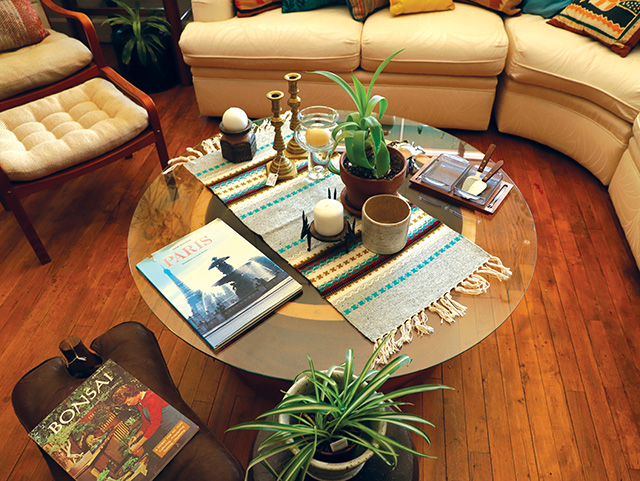 Not long ago, Southside Vintage was one of the best-kept secrets in Minneapolis. Now there’s a line around the block.

Let’s start at the beginning: Originally coined in 1984 by art historian Cora Greenburg, “Mid-Century Modern” (MCM) design came into prominence in post-World War II America as a sort of flamboyant celebration of modernism, echoing its predecessors the internationalism architectural movement, the Bauhaus school of Germany and the works of Charles-Édouard Jeanneret (Le Corbusier), the Swiss-French architect, artist and architectural pioneer who famously, unromantically said, “Une maison est une machine-à-habiter,” or, “A house is a machine for living in.”

You know MCM when you see it: Hans Wegner’s Ch07 Shell Chair, Isamu Noguchi’s boomerang coffee table, Poul Henningsen’s Artichoke Lamp. These are, literally, your grandpappy’s furnishings—functional artwork, ultimately, both named for their designers and numbered for their limited creation. The dining table becomes a showpiece, the chair an icon, even the fruit bowl a flex. Think Frank Lloyd Wright, Diamonds Are Forever, Palm Springs.

To enter Southside Vintage, then, which sits at the intersection of Cedar Avenue and East 42nd Street in south Minneapolis, is like passing through time and into something of an ever-changing Rubik’s Cube of super-stylish (and affordable) mid-century finds, a menagerie of bentwood and teak and chrome and Danish Modern everything, overflowing with exotic plants from funky pots. But this is the result of a lot of work. 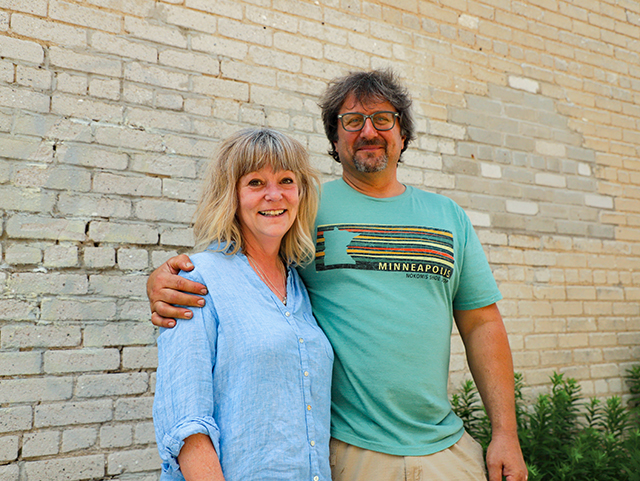 Susan Donnelly, who owns and operates the shop with her husband Chris, describes some recent time off in a flourish: “Out of the blue, we had a couple of messages from people that I finally listened to, there were these stashes of teak furniture, so we had to rent a truck and hire some guys and spend three days in the middle of the week unloading furniture out of different locations.”

When asked if things have calmed down a bit since, Susan says, simply, “No,” and laughs.

Chris adds: “We had a woman come in yesterday—she had messaged about a wall unit—she came in yesterday and bought it, so that’s going to get delivered on Monday. So I’ll take it all down, set it up for her, redo it in her house. Then, some people came in today, they’d just moved in from Green Bay, moved to the area—”

“We’re closed,” Susan interjects, “but we saw them peeking in the window, so we went out to tell them we’re open next weekend, and we let them in to walk around, and they found something they wanted, so we sold a desk. Yeah, and then we bid in an auction last night and we got three sofas that we have no room for. And so we’re just always, always in flux.”

Susan is eloquent, articulate, incredibly focused, her energy electric. Chris, comparatively, is laid-back, a grizzled guy’s guy who can take any piece of busted furniture and make it sing. Their yins compliment each other’s yangs perfectly. 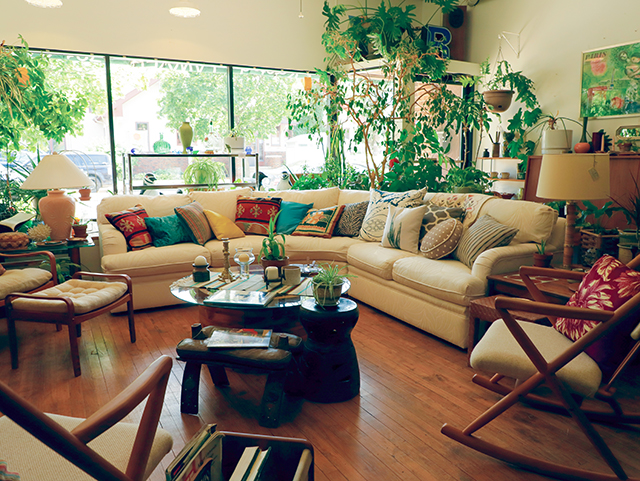 A Minneapolis native, Susan began her career as a production designer/set decorator/prop stylist for TV commercials, videos and local print ads. “And then Chris’s sister started crafting,” she says, “so we got a booth at a local antique store and I started augmenting that with some of my vintage finds.” She adds: “I’ve been thrifting and collecting since I was around 14 years old.”

Susan soon outgrew the realm of consignment, seeking the freedom to design and display on her own terms. Thus, Southside Vintage was conceived. It is, in Susan’s words, the amalgamation of “every oddball skill, every weird little experience we’ve both had in our lives—had we not made every good or bad decision along our path, we wouldn’t be here right now.” This is the recipe for Southside’s success: the combination of one another’s skills and backgrounds and tastes, infused with prelapsarian curiosity and drive.

“I’m from eastern Pennsylvania,” Chris says. “Been in construction all my life. Did my own business contracting, remodeling, carpentry, and I’ve always liked to work with wood.” Vintage, he explains, was totally out of his wheelhouse. “I didn’t really know much about it. And then I met Susan in ’09—”

“—’08, one thing led to another, moved out here, and went from there.” Chris continued doing odd jobs—reframing houses, remodeling—until Southside’s inception. He describes his role modestly: “I can take stuff apart and fix it and I work with wood.” In reality, the guy’s an expert, and his refinishing skills are nothing short of amazing.

But the hunt is one of the most thrilling aspects, and it’s constant for Susan and Chris, who always seem to be traveling to and from estate sales—sometimes locally, sometimes across the country. “Each phase is thrilling and satisfying in a different way,” Susan says. “The finding is fantastic. Then, to pull all these things from different states all around the country and get them in here—it’s like a giant puzzle. It’s combining things in different ways, taking ideas I have when I see something and putting it into practice. I love seeing how things come together. Another level is getting the response from other people, that what we do gives them pleasure and ideas and sparks creativity, which then leads to discussions.” 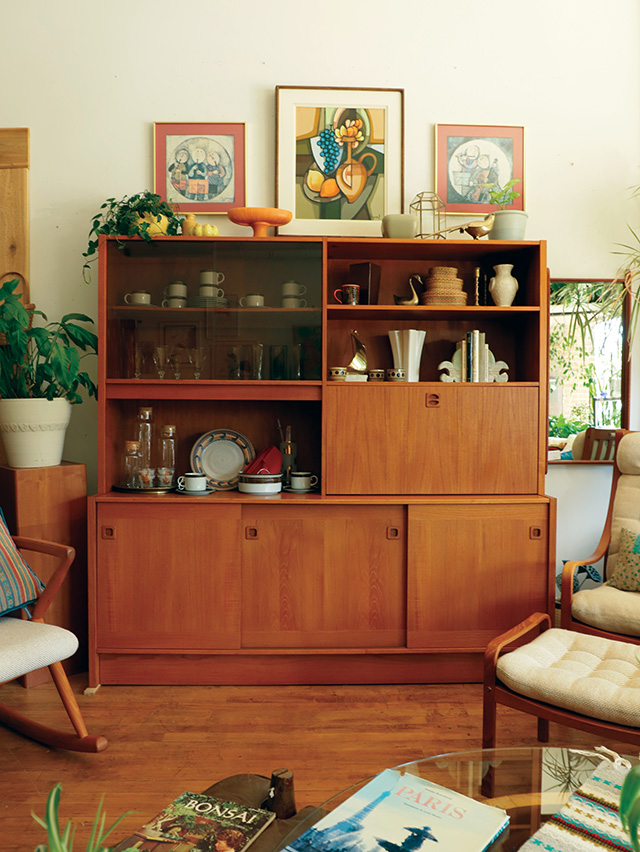 And, yes, sometimes it’s “very difficult” to part with items. And Susan will “hold onto certain things for a while” because they remind her of her mom, who passed away three years ago.

Reflecting Le Corbusier’s philosophy, Southside Vintage indeed acts like a machine: It isn’t worth describing their current inventory; the turnaround is whiplash-quick. You can walk in, spot a dazzling side table, and by the time you’re finished admiring a Cézanne print from a 1960s Parisian art museum, that side table’s being walked out the door. Southside Vintage isn’t a furniture store; it’s a showroom of stories, and each piece contains within it a small piece of history. When a customer takes home a chair or a spice rack or a painting, that history regenerates and joins with the customer’s own.