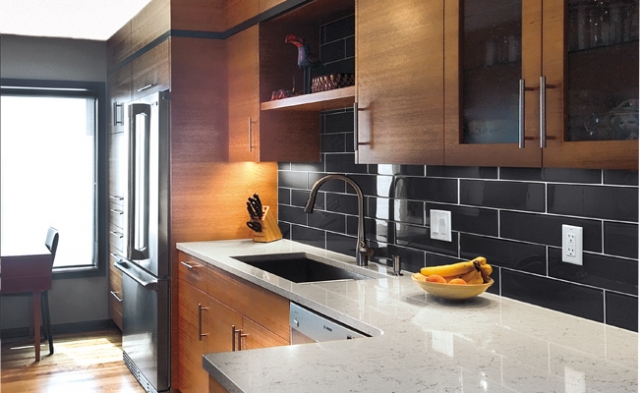 More and more, people living in urban areas like the Twin Cities look to condominium or apartment buildings for a place to call home. While condos and apartments tend to offer several amenities and great locations, it’s sometimes hard to escape the sentiment of being trapped in a cement box that is identical to the other hundred people living in the building. However, owners of condos are now taking the liberty of personalizing their spaces through remodeling projects, adding a sense of unique style and flair. Beth Malmberg, Sales and Design Director at Vujovich Design Build, recently directed a condo remodeling project in Minneapolis that is sure to inspire people who own smaller spaces to revamp and update their “home sweet homes”—even if home is on the 14th floor. 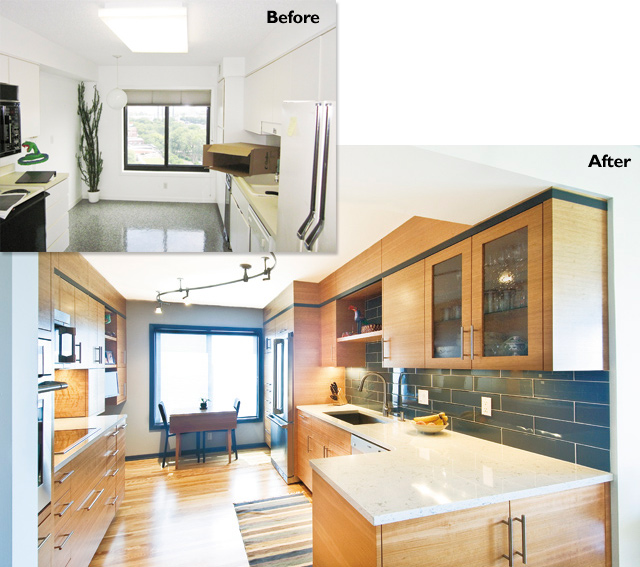 What once was an incredibly sterile and outdated apartment on the Mississippi River is now a luxurious and green-conscious dwelling for a couple that loves to enjoy an urban environment when they aren’t traveling. Located at LaRive Condos in Minneapolis, this condo is an example of how cohesive elements and timeless features can create a home filled with, what Malmberg calls, “natural comfort.”

Built in the 80s, the condo desperately needed to be updated, and the homeowners wanted to incorporate environmentally friendly products into the plan. Malmberg notes that building green was “mostly done through selection and not so much changes to the mechanical side of things. We focused on building things that are durable, things that will have longevity and that aren’t overly trendy, and we used sustainable and health-friendly products.” Some products used in this project include FSC Red Birch floors, tile with recycled glass content, No-VOC paint (paint containing no volatile organic compounds that compromise the air quality during and after painting), and wool carpet.

This project was all about “maximizing space and defining function,” as Malmberg states. Most notably, the foyer underwent significant changes under this goal. Designed in the style of the time, the foyer area had several 45-degree angles and “things that spoke to the era in which it was built,” according to Malmberg. “You came through the door and felt like you were in a bit of a maze. Everything in the foyer was mirrored originally. It was a crazy kind of feeling—you didn’t know if you had landed or what the experience was going to be like.” In order to open the condo into a more welcoming environment, the area was squared off to create a spacious foyer complete with a bench and unique storage.

Other renovations completed in the condo included a much-needed kitchen update, with timeless wood cabinetry and updated floors, countertops, and appliances. The guest bathroom was remodeled keeping the original layout—existing floor plans are sometimes difficult to modify in a condo setting. The master bathroom was re-envisioned as well in order to add more storage space and continue the fluid, natural flow of the home. 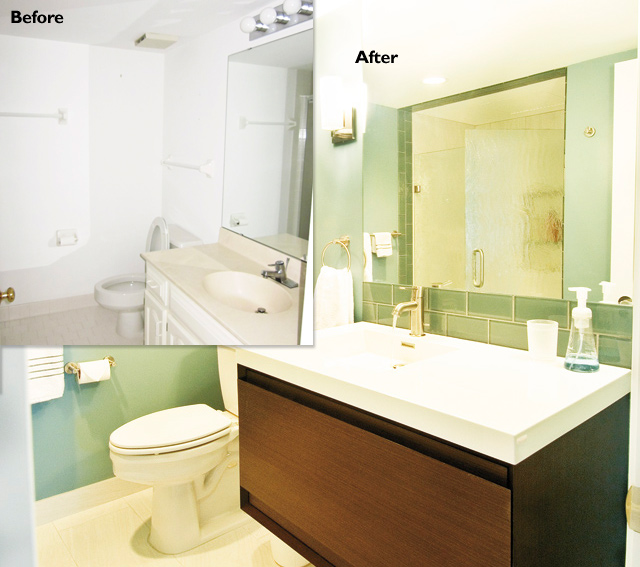 Though the homeowners received quite a bit of guidance from the design team, they assisted in planning the look and feel of the condo by providing photos of design elements they liked. Together, the homeowners and Vujovich created a home that is “clean, streamlined,” and full of “organic products” that provides “natural comfort.”

Malmberg suggests that people who are interested in remodeling allow themselves several months to plan. She notes that people may think they know what they want, but planning with a professional team is a valuable use of time and money. When you utilize the help of a design team, Malmberg says, “things are easier to define and price. You know where you’re going to end up in the long run if you invest in that design time.”

Another tip is to create reasonable expectations for project timelines and budget needs. Design and build teams like Vujovich help set and meet practical time lines for remodeling projects. This remodeling project, Malmberg recalls, ended up being a bit more challenging because the new owners of the condo didn’t expect to sell their old home so quickly. “There was a real push for us to move the process along as quickly as possible.” After four months of careful decision-making and constructing, the home was finally ready for the couple to move in.

When re-envisioning a smaller space like a condo, it’s important to incorporate cohesive elements, according to Malmberg. This condo uses the same quarter-sliced cherry wood for cabinets in the bathrooms and kitchen. Using one material throughout a smaller space creates unity and a calming simplicity. It’s important to simplify details and “put punches only in specific places so it doesn’t seem overwhelming.” 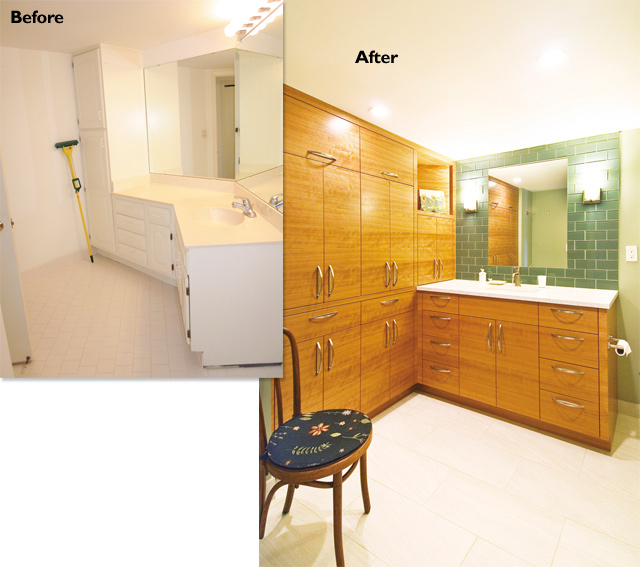 Also, Malmberg notes the importance of maintaining consistent flooring, which makes a home look unified and larger. “One room runs into the next. In this case, it was all about creating a serene setting—taking a small space and making it seem more spacious, making it feel like a whole home. It helps move your eye through the spaces and gives you the sense that you’re continuing through one larger space.”

Malmberg believes very strongly that projects are more successful if homeowners work with a design-build team. This will allow homeowners to have very accurate numbers throughout the whole building process. “As you’re making choices, you’re doing it with numbers in mind…not just as a guess of what it might cost.”

If you’re not working with a specific design-build team, Malmberg says that it’s useful to have your team mapped out before you begin. Know who is doing what, and keep everyone informed of any changes or updates. “Really, it’s about the relationship and working with people you trust—people who can come to the table and figure it out.”

Finally, Malmberg suggests that homeowners “be realistic the whole way through. It’s easy for us to all get very passionate about what we’re doing and be enthusiastic, but it’s important to always have that reality check going on as well.”

Though apartments and condos may seem small, owners of these spaces still have the opportunity to dream big. While it’s important to note the limitations of the space at hand, a thoughtful plan and a supportive design-build team allow condo owners to imagine the possibilities and make their units feel like home. 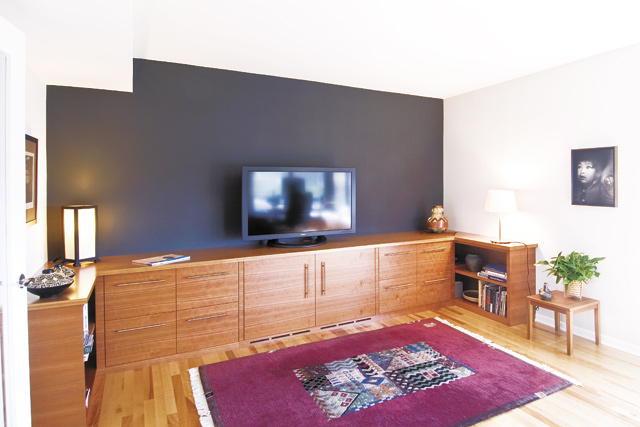