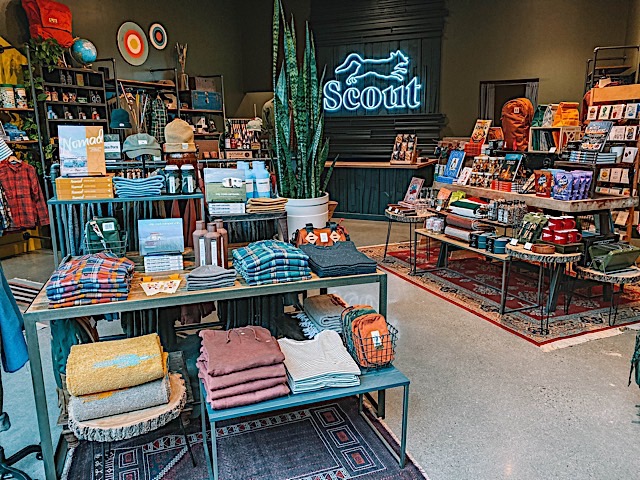 In 2016, married couple Ben and John were searching for positivity within the queer community during that decidedly less-than-positive year. So they started the process of founding the cool-kid and LGBTQ-friendly lifestyle brand Scout. With locations in Saint Paul (27 7th St W) and Edina (3925 Market St), Scout hawks super-fun gear ranging from pronoun pins to outdoorsy flannel jackets fit for a hypebeast hike, killer throws to nostalgic camp flags, and beyond. But more than a lifestyle brand, Scout is a shop built on two core values: inclusivity and planet-positivity. We sat down with co-owner John Thompson:

Scout actually started about 11 years ago. I wanted to do something fun and creative on the side, and I had some friends who were doing vintage pop-ups, so I started my own menswear pop-up called Scout. My focus was primarily on outdoorsy clothes and military surplus, and so the name Scout came out of that. I did that for a couple years, then just got busy so kind of put it off to the side, but always had this dream of opening an actual brick-and-mortar store.

[In 2016], some friends of ours and I got together and wanted to do something productive with our time and, like, take our energy and try to make something positive out of what we felt was pretty abysmal, so we started a little group with our friends where we would each pick a project that we were working on and meet once a month to talk about our projects and try to encourage each other and give each other feedback and move things forward. We actually started off wanting to do a cookbook, and then as we were going through that process of meeting once a month, we were like, Something’s not clicking here. Why are we working towards something that I’ve never really dreamed of? Why don’t we work towards the actual thing that we’ve been wanting to do, which was open a brick-and-mortar store? So we decided to go back to Scout. So really, it came out of this idea that we wanted to—during a time that felt very difficult and almost traumatic to us—try to find something positive.

Are there experiences or feelings that you hope to provide to queer customers through your products, or even just the experience of being in the store?

I think first and foremost we try to find ways of creating a space where not only do people feel comfortable and welcome to just be who they are, but also where they can find pieces of themselves.

How does Scout now compare to Scout when it was still just an idea? Are there places you hope to see it go from here?

When we initially were working on creating Scout our focus was very much on it being a clothing store, and I think we pretty quickly realized that it could be more than that. Within our first year we started adding in more gift items, and things that were not clothing but related to the brand. I think at this point I would call us a lifestyle brand versus a clothing retailer. We’ve kind of expanded from getting into gifts to now doing more little home decor pieces and things like that, and I think that’s really the evolution of Scout going forward: continuing to build on that lifestyle concept.