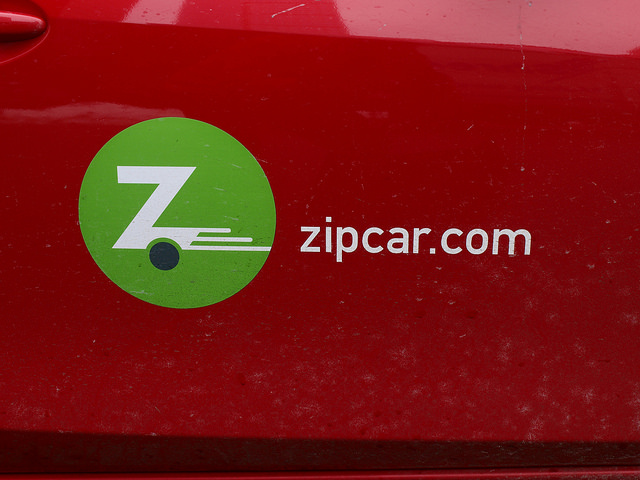 Have you seen the price of gas, lately?

At the onset of a new year, some communities across the U.S.A. are seeing something they have not seen in a very long time: Very low gas pump prices. Pump prices have dipped below $2.00 a gallon in plenty of places – especially right here in the Twin Cities and Upper Midwest – which is either good or bad news, depending on where you sit.

This could be a temporary situation. Traditionally, gas prices start to climb sometime after the first of the year. Enjoy it, while you can!

For a non-car owner, it will not affect them. They already pay fluctuating ride costs when they tap on their Uber or Lyft app. Public transit has already set fares to recoup their own fuel and operations costs. Taxis are not going to lower fares, either.

Car sharing operations are in the same state of flux. Who knows what the price of gas will be next week…or month? They have a set rate per hour – or minute – and their subscribers know how to work the system of the service they use.

In these days of temporary gas price relief, is car sharing still relevant?

In preparation for an upcoming issue that a local publication I write for is doing, I decided to try a new (to me) car sharing service to find out – Zipcar.

You may have heard of Zipcar. Celebrating their 15th year of operation, they were acquired by Avis Budget Group to maintain their global presence. When they first arrived in the Twin Cities, they served only the students, faculty and staff of the University of Minnesota. A change in contract for car sharing services on campus sent Zipcar out into the greater community with hubs in both Minneapolis and St. Paul. That move put Zipcar in direct competition with local non-profit HourCar, Daimler AG-owned car2go, and Enterprise Car Share.

According to Brian Harvey, Zipcar Minneapolis Market Manager, there are 10,000 vehicles in the fleet around the world with over 900,000 “Zipsters” – the term they use to identify their subscribers. One of the benefits of being a “Zipster” is access to the 10,000 vehicles in the fleet wherever Zipcar has its service available anywhere in the world. The Zipcard members get, along with downloading the app, can assist when you need a car in a city you just happen to visit.

In the Twin Cities, there are 32 or so vehicles. Zipcar was unable to provide a breakdown on how many users are in this market.

Before their arrival into Minnesota, Zipcars were present in many cities, mostly using on-street spots to increase access to users. I saw this up close in Portland, Oregon, where it seemed that Zipcar had the downtown core covered extremely well. In Minneapolis, Zipcar do not has that dense of a presence, therefore they positioned their vehicles at key locations downtown and in Uptown. HourCar and Enterprise also maintain key hubs in those two locations, though HourCar has more city-wide coverage including Nordeast Minneapolis. The only car sharing service with a presence in North Minneapolis is car2go, which their parking flexibility allows them to go anywhere within the city limits. As other car sharing services found out, the Northside is a tough market to crack due to various factors regarding public/shared transportation use.

As with all other car sharing services, in order for me – a resident of a place connected to the “Northside” – to use one, I would have to go the nearest hub in the North Loop, or go directly into downtown Minneapolis. That would require a bus, of course. Or, as some people have done, take a nearby car2go smart fortwo to said hub. It almost sounds like “Planes, Trains and Automobiles!”

There is one attraction to Zipcar in comparison to other car sharing services in the Twin Cities. When HourCar opened up ten years ago, they featured the Toyota Prius. Everyone thought that the hybrid would be the perfect vehicle to use in car sharing. It had a huge cabin, loads of cargo space and would return high fuel economy with low emissions. Yet, they were not affordable to buy. What HourCar and other services found out, it would be cheaper to own and operate smaller subcompacts – namely the Honda Fit – than build an entire region-wide fleet of Priuses.

Zipcar is different, as it would leverage the fleet of Avis Budget Group to put specific vehicles out in the fleet. It also meant diversifying the fleet to meet community needs. While the bulk of the fleet is the Ford Focus, there is a wide variety of vehicles to choose from. In the case of Zipcar in Minneapolis, there are some interesting hubs to be found – including two BMWs, an Audi and a Nissan Frontier pickup truck.

Why on Earth would you let two BMWs out on your fleet to share?

Harvey explains further: “With over 30 makes and models available in the global Zipcar fleet we offer more car types than any other car sharing service. This means that a member can use a hybrid for a quick trip around the city, an SUV for ski trip, or a minivan for a weekend away with the family. We have a variety of cars to fit a variety of use cases. Our cars fit our member’s needs.”

That’s great, but what about around here? “Of course in an area like the Twin Cities,” Harvey explains, “it makes sense to have cars that function well in snow so we’ve added all-wheel drive and four wheel drive vehicles like the Ford Escape, Subaru (XV) Crosstrek and Impreza, Nissan Frontier, and BMW 328i (xDrive) and 528i (xDrive). About 40% of our local fleet is AWD/4WD and about the same amount have heated seats!”

Everything sounded good so far. Having been an HourCar member and currently carry a car2go membership, I figured I would try Zipcar to see if it fits in my transportation strategy. 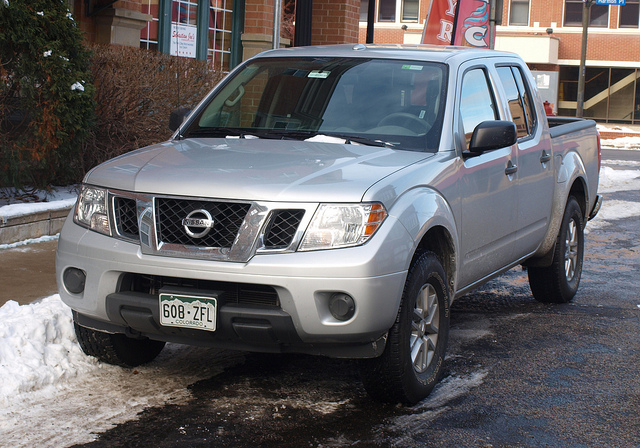 At first, I wanted to see how Zipcar works. I decided to do an hour with one of their vehicle for the experience. After going through the app on my phone, I found something near where I was having lunch nearby Minneapolis Community and Technical College and booked it. A few minutes later, there it was – a 2014 Nissan Frontier SV crew cab pickup with four-wheel drive Zipcar calls “Husky.” I figured that I would be covering compact/midsized pickups this year, so I tapped my card on the reader and got settled in.

The idea of having a truck as a car share vehicle came from HourCar. Their users wanted something to use when they go to IKEA or a nearby home improvement place. After adding two pickups to their fleet, Zipcar thought it was a good idea to take one of their trucks from the Avis Budget fleet and add it in Minneapolis.

Having never driven either of HourCar’s trucks, the Frontier offered plenty of cabin space with the crew cab. You can seat four or five, which may be a huge advantage in Zipcar’s favor. The bed is short, but could be used for those trips to buy furniture, plants or anything else needed around the home. Not to mention, the Frontier is quite a tough truck. The V6 underneath the hood powered the truck around Minneapolis without hesitation. The ride and handling was stable, which is fine for those the purpose intended.

The trip was over short of an hour. That meant parking where I left it – an on-street space a block near the MCTC campus – and tapping the card to lock the Frontier up.

It was that simple. Using the app to reserve, tapping the card to unlock and lock and drive. Your charge – an hourly rate with appropriate taxes – is sent to the credit card on file. If you have driving credits, which some plans offer monthly, they are applied against your charges per trip.

So, if it was that simple to do, would you use Zipcar? I asked myself that question after I left the Frontier at its location. The answer was simple: Of course! I’d do it again.

The overall experience for Zipcar has been extremely positive. The cars are mainly in good shape, but users need to report anything out of the ordinary when possible. They are also clean, devoid of trash and other things left behind. The main concern is exposure to the elements. If there is a set time for rotation of these vehicles, they would be served better in outdoor locations to avoid issues from weather and climate exposure – especially here in the Twin Cities.

However, there is an issue about outdoor accessiblity to the Zipcar fleet. With most of its fleet parked curbside instead of in ramps (parking garages in Minnesota-speak), they are at the whim of the Minneapolis City Council. By September 11 of this year, the City of Minneapolis will determine whether to extend the pilot program to allow car sharing on city curbs rather than off street locations. According to Harvey, if the City Council chooses to end cubrside car sharing, they will be fine with going back to off-street locations where they started when they began in the Twin Cities a few years ago.

On the plus side, the key to a good car sharing service is customer interaction. Avis Budget always had a reputation for good customer service and that is why I use them for regular rentals when I need them. Zipcar adds to this reputation on both the local and national level. This is the real win for Zipcar users wherever they use the service. 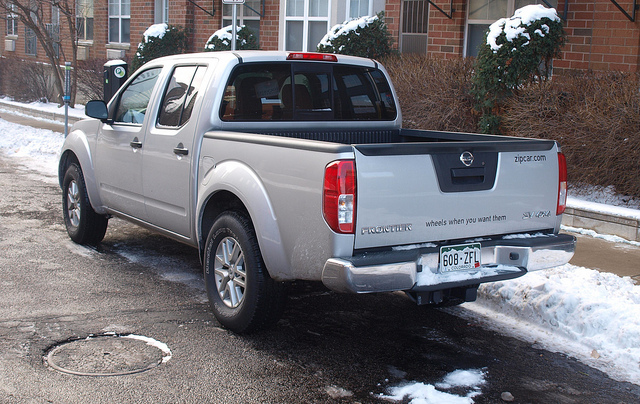 Perhaps that is fine. What makes a good car sharing service is an attention to providing a fleet that is serviced and supported well. If you happen to be in multiple cities, you have to have consistency across the board on both counts.

It certainly sounds like Zipcar has found its place in the Twin Cities, just as it has elsewhere they operate. It is the one car sharing service that provides a diverse selection of vehicles for both locals and visitors to use. And, it is very sustainable – regardless of the price of gas.

Car sharing is still relevant when it is needed – especially here in the Twin Cities. To that end, Zipcar works.