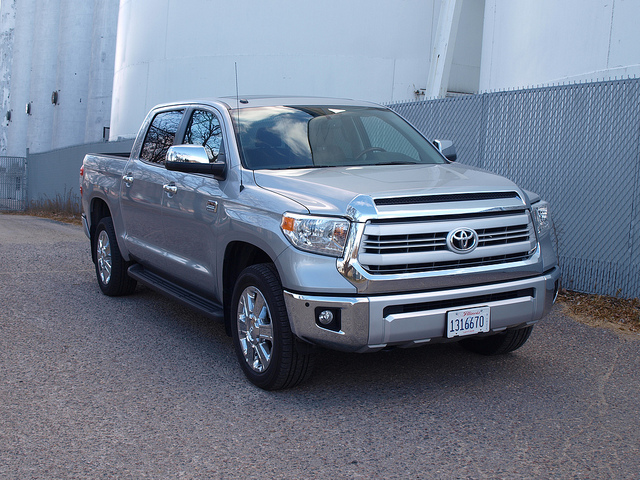 Another pickup truck? What is going on at the editorial desk? Have we gotten butch, lately? We know Lavender‘s auto scribe is someone associated with the Bear community, but frankly…

As cooler heads prevail, an explanation is in order. This is no ordinary truck, however. This is the latest and revised effort by Toyota to play with in the full-sized truck sandbox. It was marked to rattle some sabers against Ford, General Motors and Chrysler and their big truck offerings.

Recently, the Toyota Tundra took some significant turns in its short history. Majority of the production is done at their San Antonio, Texas plant. Therefore, the Tundra wants to broadcast their Texas roots and join in the fray of the state’s truck culture. After all, trucks are big business in Texas.

With the exception of GM and Nissan, pickup truck owners have the choice of adorning the cabin in some form of “Cowboy luxury” decor – especially for Texas truck buyers. Ford has its King Ranch edition across the F-Series line, while Ram offers the Laramie Longhorn. Seats remind you of horse saddles with the design and stitching to boot.

Considering Toyota and its links to San Antonio, they are now offering a “Cowboy luxury” edition called the 1794. That sounds like a year, right?

It is a year – a significant one for both Toyota and San Antonio. The plant’s property used to be part of a sprawling ranch that was established in 1794, hence the trim’s significance. But, there is nothing 18th Century about this Tundra – it is all 21st Century.

You cannot fault the Tundra for not having a presence. The Toyota truck has a big snout, enhanced for 2014 with an even bolder grille area. Some nips and trucks were evident, but the basic tenets of the Tundra’s mix of industrial and sleek design remains as its calling card.

One thing you will notice on the Tundra is the cab – it is humongous! Crew cabs usually take up a lot of a half-ton pickup’s footprint, but no one could fault the Tundra’s Crew Max passenger shell. The doors are about the width of any given coupe or two-door – though taller on the Tundra. Luckily, you have running boards to guide your entry up into the cabin.

The 1794 edition adds a few embellishments without going over the top. Extra chrome and satin finishing on the grille, along with chrome 20-inch wheels and decent-sized chrome-and-bronze motif badges denote the “cowboy luxury” edition above the rest of the Tundra lineup. Toyota did a very good job distinguishing each trim level with a balance of subtlety and distinctiveness. 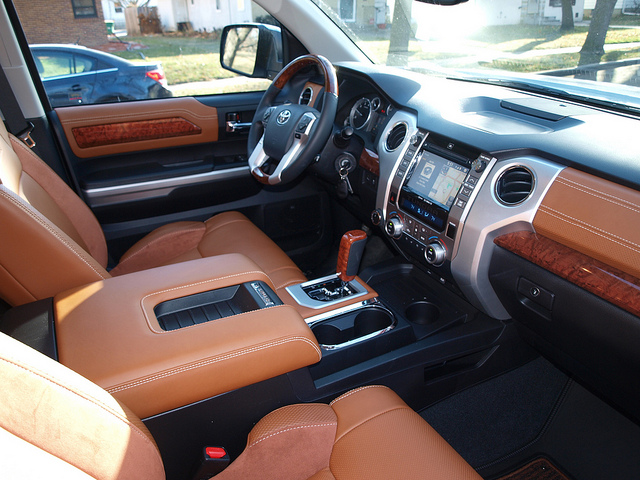 Once you climb inside, you would actually be surprised. The moment you mention the term “cowboy luxury,” you would think of seats and other leather facings with horse saddle finishes and belt buckle chrome work. Not the 1794. The bronze-saddle leather motif is combined with black, satin silver and chrome finishes making it more tasteful than expected.

The seats themselves are huge and throne-like. Not only do you get buttery smooth leather upholstery, there is a bit of suede – maybe alcantara – on the inside of the bolsters. The seats are supportive up front, separated by a wide, useful console and a gated shifter. Rear seat passengers in the Crew Max cabin will experience legroom beyond anything in its class. The 1794 comes with its own floor mats with is part rubber, part rug with versions of its chrome-and-bronze badge.

The amount of wood, leather and space in the 1794 almost reminds you that it could easily pass as a Lexus – including the wood on the steering wheel. In all, the Tundra 1794 is quite luxurious to experience inside.

In this update, Toyota addressed complaints about the ergonomics of the Tundra. The instrument panel is better with more access to key controls on the center stack and a bigger infotainment screen. Instrumentation is comprehensive, but the switchable screen in the middle offers nominal information compared to its rivals. What you get from that screen is more straightforward information, however. 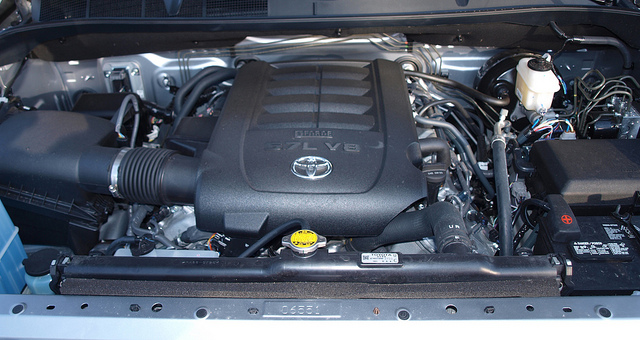 A truck needs serious power to haul – everything. Toyota drops its 5.7liter iForce V8 as the 1794’s only engine choice. There is 381 horsepower and 401 pound-feet of torque at ready on a right foot’s notice. With the 5.7liter engine, your towing capacity jumps to 10,000 pounds, along with a payload of 1,505 pounds. It might even tow a space vehicle, if you ask it to.

A six-speed automatic is attached to the big V8, which gives it smooth shifts and nice throttle response to go along with its power numbers. This 1794 came with the 4WDemand part-time system that has automatic hubs and a knob to select your traction needs. This system offers great grip on slick roads, but it does restrict sharp steering maneuvers. If you look back at Toyota’s history of four-wheel-drive systems, you will know this is amongst the best in the business.

Pickups have certainly improved when it comes to driving dynamics. The Tundra offers a smooth ride overall, though road imperfections and indifferent surfaces could not be completely controlled by its rear leaf-spring setup. Take a curve hard and it will roll into it. Take it easy and the Tundra will reward you. The Tundra will offer you more brawn than luxury in the 1794 in its ride-handling mix.

Aside from the complaint in 4WD-Hi, the steering is a bit loose, but responsive when it needs be. On-center offers some play even at high speeds and you get to rudder a big, wood-and-leather trimmed wheel if it calls for that. Brakes are good showing strong competency in both normal and panic stops.

Pickup trucks do drink plenty of gas. The Tundra with the 5.7liter V8 averaged 14.4MPG. One concern with fuel consumption is its fuel tank – only 26.4 gallons. Its competition offer up larger tanks for extended ranges, which the Tundra does not offer an option for such. 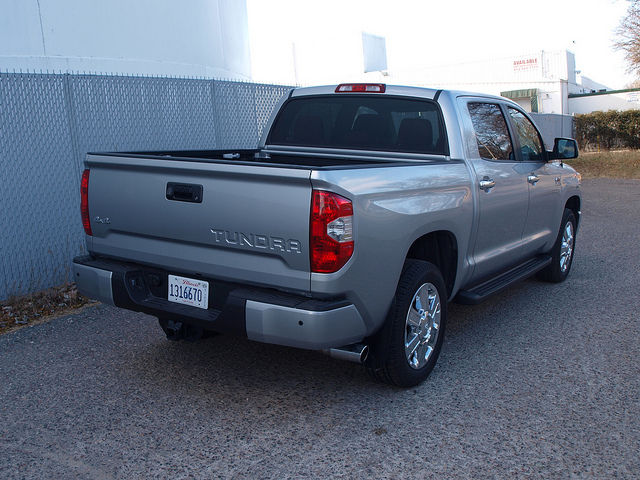 The Tundra lineup begins with the SR work truck – a regular cab with a long bed, the 4.0liter V6 and – at $26,915. You do get a selection of trim levels – SR5, Limited, Platinum and the 1794 – along with cab types, bed lengths and powertrain options. This 1794 tester came with a sticker price of $49,715. It is worth noting that rival “cowboy luxury” trucks with similar configurations would scale above the $50,000 mark.

In a timespace where full-sized pickup trucks are amongst the best sellers in this country, one forgets there are choices beyond the domestics. Some even forget there are other pickups in the market. By ignoring the Toyota Tundra, one will miss out on a capable, strong and powerful pickup truck. You might even forget about a cabin that is fit for a growing family. Most of all, you might not consider what the Tundra could do as a truck for business.

As for the 1794, to dismiss the experience as another “cowboy luxury” pickup is to ignore the effort Toyota put into this edition. Is it on the level of its half-ton competition? For the open-minded consumer in this market, you will find that it is pretty darn close. It is a good truck, however – plain and simple.