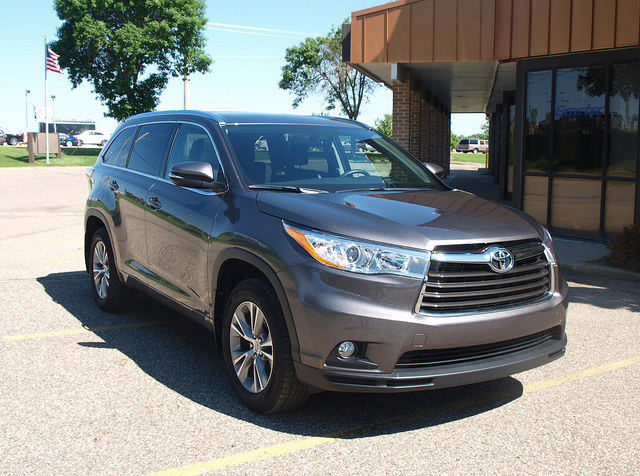 Rather, let’s not cue The Muppets just yet. The marketing tie-in between Disney, Jim Henson’s Muppets, Terry Crews, and Toyota may have helped bring the new 2014 Highlander into our consciousness. It is always fun to plug something with Kermit the Frog, Miss Piggy, Fozzy Bear, Gonzo, Dr. Teeth and his band…and so forth…along with a movie to promote.

That is the problem in working with these vehicles. You will always be reminded of the marketing campaign and its characters rather than the vehicle, itself.

So far, that has not been the problem with this Highlander. Maybe we have forgotten about The Muppets/Terry Crews spots or the movie the spots helped promote. In a sense, it was probably time to focus on what the new Highlander can do.

In all due respect to Disney, Jim Henson’s family, and all of their fans, let us talk about the 2014 Toyota Highlander…OK?

The new Highlander is big. Even though it is as long as a mid-sized sedan, there is an illusion of size that the Highlander exudes. However, a lot of the specs have not changed that much from its predecessor. Perhaps it is the bold new front end that is doing it? Maybe it is the large doors and big rear quarter glass?

Nonetheless, the Highlander has a lot to offer on the outside. You can open up the rear glass to access the rear cargo area, as well as use the power-operated liftgate. Both are great conveniences for parents or others with limited time on their hands. The XLE model we tested had 18-inch alloy wheels with good-sized sidewalls from its Michelin Latitude tires. 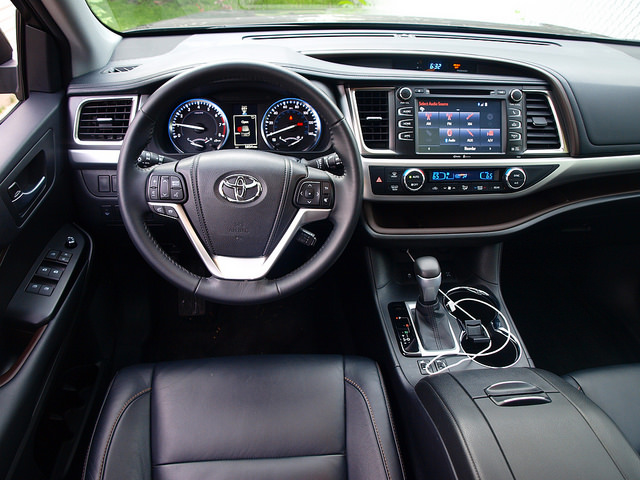 The illusion of size is also comforting once you step inside the Highlander. Four big doors open up to rows of massive space. Front seat occupants get big seats with loads of room to adjust behind the wheel. The XLE model adds power adjustments for lumbar support. Rear seat occupants get adjustments for legroom and recline, along with cupholders in the armrest. The third row is easily accessible and would benefit from the second row moved toward the front with extra legroom. Otherwise, it is best for children, with anchors for child seats, when needed.

Cargo is flexible depending on how many rows of seats you have up. With three rows up, there is only 13.8 cubic feet of cargo space, which is well-proportioned. However, if you fold the third row down, there is 42.3 cubic feet of cargo space, which looks like it would swallow a week’s vacation for four people rather easily. The cargo floor does go flat with all rows down with easy access through the liftgate or the rear glass.

The driver gets a huge instrument panel. Instrumentation is big with readable dials and a good TFT screen in the middle for trip and vehicle readouts. It is also cleaner with most switches and controls clustered logically within the cabin. Some buttons are actually hidden underneath the center stack on the console, but others should be familiar to Toyota owners. Perhaps the best feature is a shelf that runs from underneath the Entune screen toward the passenger side. You could put your smartphone and other goodies within reach on shelf.

Toyota’s Entune infotainment system is driven by a large eight-inch touch screen in the middle of the dashboard. The screens are clear to understand and offer plenty of options for connecting through Bluetooth or a USB cable. You also get SiriusXM and HD Radio for your listening options through six strategically positioned speakers and a very good navigation system on board. This tester had a rear seat Blu-ray player with a single drop-down screen and a pair of wireless headphones when you have children to entertain along the way. 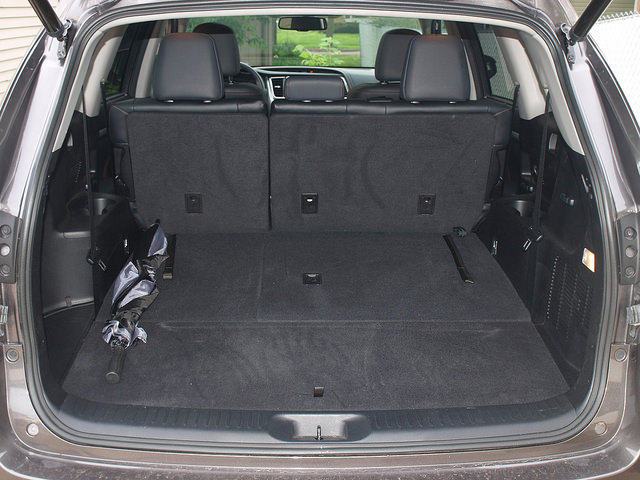 The corporate 3.5-liter V6 is the best choice for powering the Highlander. With 270 horsepower on tap, there is plenty of punch to get the Highlander going on the highway or across town. It is well suited to run 4,310 pounds of mid-sized crossover anywhere you point it. A smooth-shifting six-speed automatic sends power down to all four wheels. In the XLE model, you can tow up to 5,000 pounds.

In truth, the Highlander is a big ol’ softy. It rides smooth and absorbs the bumps and cracks on the road. You do get some roll and lean in the corners, but not enough to make things uncomfortable for everyone. The Highlander’s ride is also on the quiet side and the all-wheel drive senses loss of traction rather quickly and smoothly.

Steering is rather easy, made possible by an electric system that steers rather decently. The turning radius is fine and the feel is soft and light. Brakes are decent with good stopping power. Pedal action is good for normal and panic stops.

Toyota claims the V6 Highlander will average 20MPG. V&R achieved an average of 20.5, which is a bit better than average.

The Highlander lineup starts with a four-cylinder powered, front-drive LE model with a sticker price of $30,470. Our XLE V6 all-wheel drive tester came out to $40,170. If you want a Highlander with the works, a fully loaded Hybrid model—the V6 plus Toyota’s Hybrid Synergy Drive—in the Limited Platinum Package will set you back $51,045. 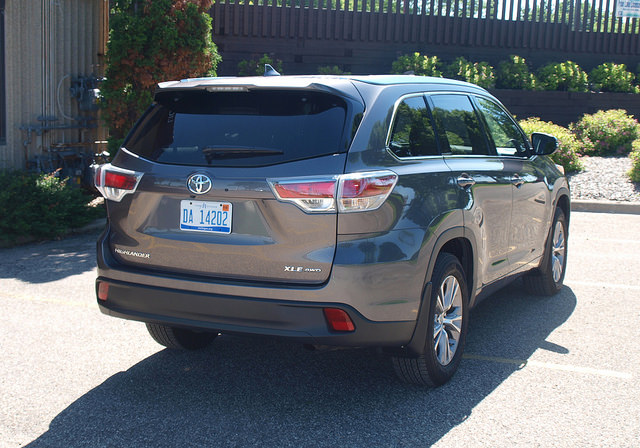 This Muppet-free Highlander is quite a good choice in a highly competitive segment. It ticks all of boxes: it rides well, is comfortable, and is right on the money.

There are plenty of players in this segment. Some have tighter third rows or lack ease of access to the rear. Some have huge passenger spaces or huge cargo holds. When finding the right balance, maybe a Muppet would be your best judge of whether the Toyota Highlander is the right mid-sized, three-row crossover to buy.

Now, you can cue The Muppets. Yes, you can play “The Rainbow Connection” on the Entune audio system…