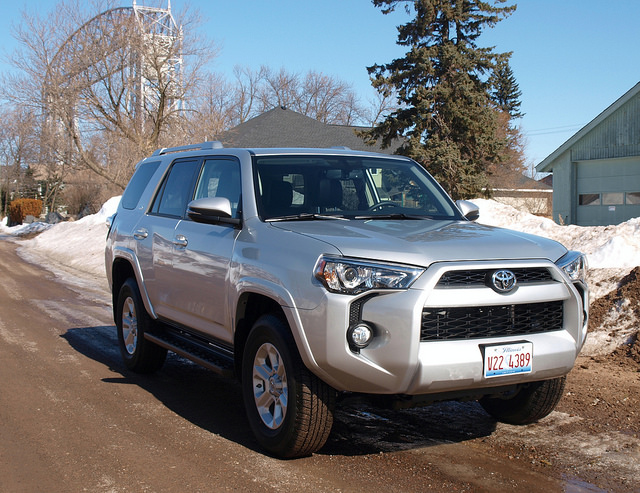 Thirty years ago, Toyota introduced the first SUV that was not a Land Cruiser.

Not that there was anything wrong with the Land Cruiser. They had been an integral part of Toyota’s history since after World War II. It is the perception of these rugged vehicles that only a few could drive them the way they were intended. Toyota could not keep them on the lots, despite a relatively higher price tag above even a Jeep or Chevrolet’s K-5 Blazer.

What this new vehicle did was to give Toyota a true SUV at a lower price point – competitive with contemporary Jeeps. It also provided a true adventure vehicle for outdoors people and off road enthusiasts. In the meantime, it addressed a need for those who are already buying their popular pickups – especially those equipped with four-wheel drive.

The secret to the 4Runner’s success was the fact that it was different body on the same pickup frame – known as the HiLux outside of North America. This body was still bolted to the frame in one piece, rather than two. It had a back seat and a removable fiberglass hardtop. They truly won over the enthusiasts in its first few generations of sale the world over. 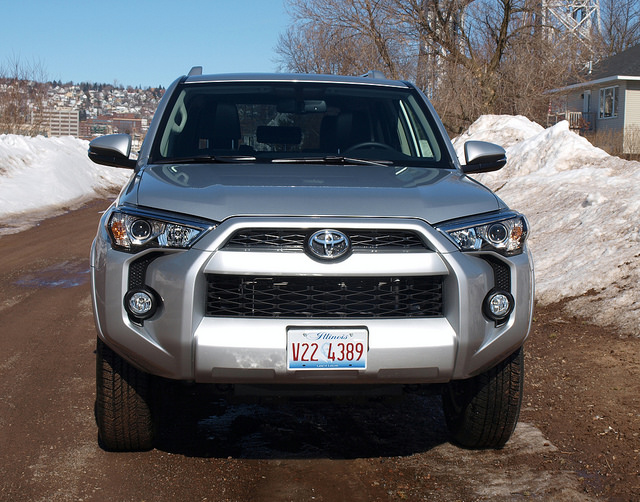 Today’s 4Runner still, follows the same formula – body-on-frame SUV that is still rooted with the global HiLux pickup, but now shared with other SUV products – namely the Toyota FJ Cruiser and Lexus GX 470. In today’s unibody SUV/crossover universe, the 4Runner has become a minority player with continued sustainable sales by enthusiasts of the vehicle. Over 51,000 were sold in the USA during 2013.

Why consider a body-on-frame SUV? Because, they can do more than take families across town, tow snowmobiles or a boat and command rural outposts.

One way to tell that it can do the job is to look squarely at the 4Runner SR5’s nose. That is a SUV that means business. It is an angry look – and rightfully so. The high undercut allows for a high angle of ascent when presented with steep climbs and proper descent angles on the other side of the hill. The grille is also purposeful to let the 4Runner breathe feeding the big V6 behind it.

The rest of the 4Runner dates back to the 2010 model year where its flared fenders, high wheel arches and folded angles create a purpose-built shell against the world around it. Seventeen-inch wheels are shod with Bridgestone Dueler tires showing off a lot of sidewall to do these tasks right. This thing is a virtual fortress when it tackles snow, ice, mud, rocks and other abnormal environments a four-wheel drive, body-on-frame SUV is supposed to go. 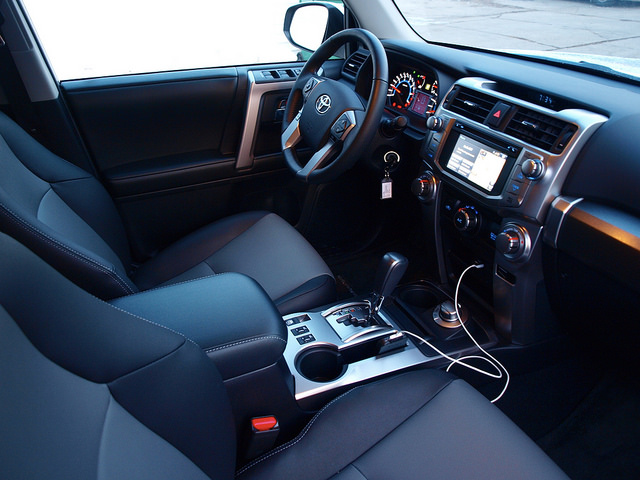 The rugged exterior is equally matched with an interior that continues the theme. There is a huge instrument cluster with large dials for the speedometer and tachometer, readable fuel and temperature gauges, a simple trip/vehicle LCD screen in-between them and plenty of warning and informational lights to keep you alert. Toyota’s rebranded Entune infotainment system commands the center stack with large buttons surrounding a decently sized screen. Below are some very good climate control switches that are a cut above what was offered in previous 4Runner models. Everything you touch on the 4Runner has an upgraded feel, even though the SR5 is the most useful and rugged model in the lineup.

Going with the upgraded theme are a set of two-tone SofTex seats, part of the SR5 Premium package. Looks-wise, this add context to a black-gray-satin interior ensemble. The seats are big, comfortable and offer some support and bolstering. The room is expansive with only two rows of seats for five adults to go anywhere in. The cargo hold is huge. There is enough room for a weekend at the cabin – or, maybe a few more days, if so inclined. 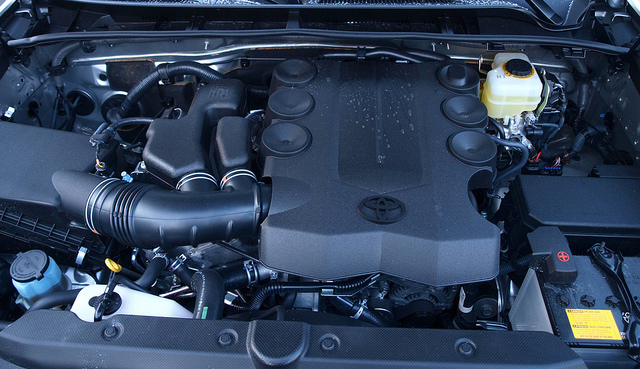 To motivate this 4,400-pound off-road beast, Toyota plunked down a 4.0liter V6 with 270 horsepower and 278 pound-feet of torque. This engine simply roars and you can feel that torque bursting through any surface you point it on. A five-speed automatic transmission delivers this power down to all four wheels using Toyota’s part-time system. The knob on the console lets you lock in the mode in either 4WD-Hi or 4WD-Lo with the added confidence of Active Traction Control. On the roofliner console adds the Crawl Control and other off-road guidance functions.

As mighty as the V6 sounded, it received little help from the five-speed automatic to make it roar with authority. First gear took a bit longer to kick down and prevented the torque to come through when needed. Beyond first, the V6 settled down and made easy work of anything in its path.

As a four-wheel drive vehicle, it is pretty darn good. At 4-Hi, you get more than enough grip to forget what is underneath those huge Bridgestone Dueler tires. Instead, they make going over mud, ice, snow and wet tarmac simply routine and with less stress. That is how a four-wheel drive system is supposed to work.

Most big SUVs are hampered by big wheels and not enough sidewall. If the suspension is not dampened, you could expect a very uncomfortable ride. This is why the 4Runner SR5 exhibited great balance with soft shocks to smooth out potholes and other road imperfections. The soft suspension also produced plenty of lean and roll through the corners. The steering system is impressive with great on-center feel, a quick turning radius and good response from the large truck-sized wheel. In 4-Hi, there was an absence of “bucking” from the front axle when doing tight maneuvers. 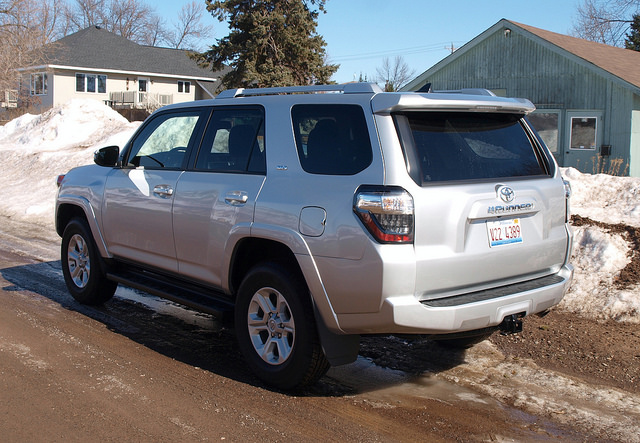 If there were one concern on the 4Runner, it would be the brakes. The action is on the soft side, which resulted in longer stops and more pedal work to reign in the 4Runner. Panic braking revealed a tendency to stop off-center. The 4Runner is equipped with anti-lock brakes for all four discs.

If you have a 4,400-pound body-on-frame SUV, you do not expect to get great fuel economy. The 4Runner turned a fuel economy average of 16.7MPG, though the sticker stated it would get 18MPG. You might say it was not exactly disappointing, given that heavier SUVs with the same kind of capabilities are even thirstier.

The starting price point for the 4Runner is $33,180 for a basic SR5 with rear-wheel drive. Step up to the four-wheel drive SR5 Premium as tested, and the sticker climbs to just under $40,000 with a few more options. The 4Runner also comes in Trail and Limited models with prices topping out around $45,000.

There is a lot to love about the 4Runner. It has the capability to go off-road, the comfort to go anywhere and the chutzpah to do with that face. Not everyone loves the 4Runner’s front end, but it is worth talking about it.

Instead of focusing on the face, why not take it where the 4Runner should make a difference – off the highway somewhere. Deep somewhere that can be tracked back to a highway when you are done exploring what is out there. This was the impetus of introducing the 4Runner 30 years ago. The tradition continues today.