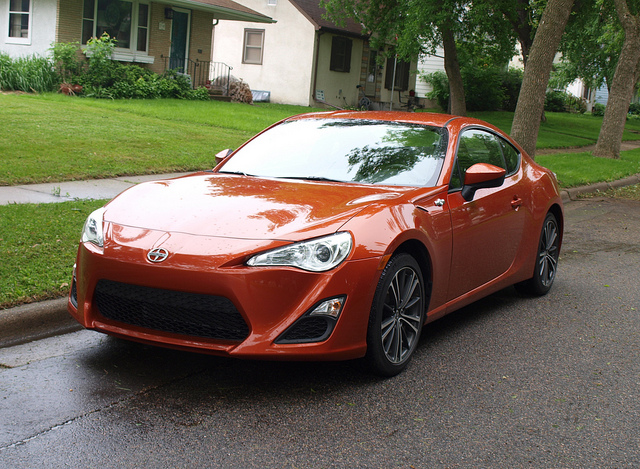 It was one of the greatest sensations that came out of World War II. They were light in weight, offered minimal seating, a lower stance, and they would run like nothing else on the road. Yet, they were temperamental. Many a carburetor was torn down on the kitchen floor from suburban ranch homes to collegiate dorm rooms to ensure that precious fuel would mix well with small engines.

All of the sudden, the sports car became reliable – and refined. Some sports cars were priced into the higher echelons, so only a few could experience “real” performance. Others remained affordable for everyday enthusiasts and people living their mid-life crisis. The latter group of sports cars is the one we fondly remember the most.

Aside from the Mazda MX-5 Miata and the Hyundai Genesis Coupe, what is left for those of us who felt slighted by the price tag of the modern sports car? Well, what about the Hyundai Veloster Turbo? Some might say “yes,” but there are times when it is thrown in with the hot hatch crowd. There are others we could argue, but there is a purist definition of a sports car – it must have rear wheel drive.

To bring back the purists, Toyota and Subaru joined forces to create one for us. Subaru calls their version the BRZ. In North America, Toyota’s GT86 is sold as a Scion – the FR-S. 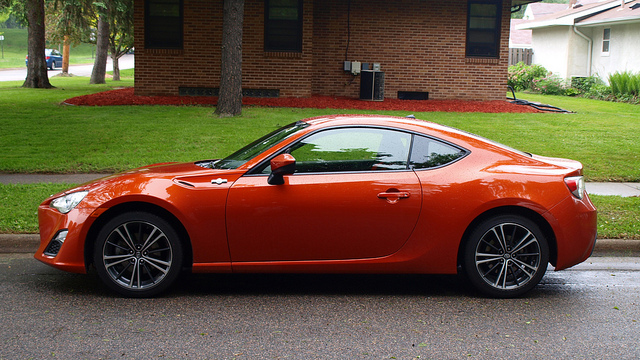 Why call this a Scion? Maybe someone at Toyota thought the “youthful” brand needed some help with image and product to let its corporate sports coupe be sold alongside the boxy xB and the miniature iQ. But, what is in a badge really?

This is not just about Scion and the brand’s imminent tenth year anniversary. The FR-S is a car that has been talked about by enthusiasts of many stripes for quite some time. Is all of this talk for real? Do we actually have a return of the sports car in its purest form?

The joint effort between Toyota and Subaru meant that each entity had its own task to work on to complete the package. It appears that Toyota worked on the design with inspirations from its past – namely the 2000GT of the 1960s and the Corolla AE86 from the 1980s. I also see some hints of Celica in its design – or, rather, its ghosts. You can tell that Toyota misses these great coupes to want to find inspiration its design.

The formula is simple: a long front hood leading to a stubby rear end. That is truly the 2000GT in a nutshell, but I would argue that it reminds me of a rival of Toyota’s – the Datsun 240Z. If you want to stretch this further, the 240Z was itself influenced by the Jaguar E-Type, otherwise known as the XKE. In a nutshell, Toyota and Subaru created a throwback to the great days of the sports car.

However, the FR-S is thoroughly modern. Some details speak to 2013 rather than 1970 or 1961. The tires may have lower profiles with larger alloys, but one could imagine the FR-S as one for days of the original Z. 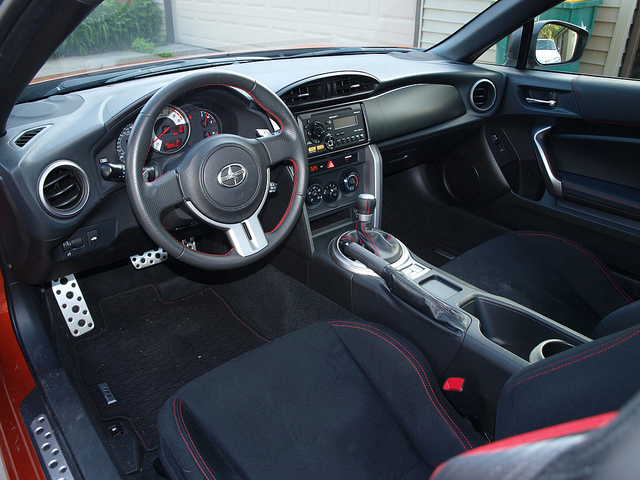 Step inside, and you are greeted with plenty of Toyota touches melding the modern with the past. The dashboard itself is a prime example, mixing some 1960s style with some faux carbon fiber effect. The three-dial instrument panel has the tachometer in the center with a digital speedometer readout. The digital speedo came in handy since you could only see the actual left dial at night – when you turn on the lights. Buttons on the left side help you get your trip information, including fuel economy. HVAC knobs felt familiar – that is, if you have been in every Scion and Toyota below the Avalon.

Pioneer drives this audio system, as they do with all Scions. Through eight speakers, you get rich sound from your Bluetooth connected device and HD Radio. The Bluetooth phone connection is OK overall. As with these Pioneer audio systems, the switches and knobs are fiddly and the readout is quite basic. You could remedy this by spending an extra $845 for the BeSpoke touch screen faceplate that adds some internet radio stations to the suite. The lack of SiriusXM satellite radio and a navigation system could be a miss for the FR-S, but that is up for debate.

The front buckets were designed for track duty. Thick bolstering tucked in my wide body, though allowing my shoulders to find proper rest above them. These are not the most comfortable seats in the industry, but rather appropriate for the FR-S’s aspirations. Legroom is ample, depending on how far back you move the seats. Do not expect the steering wheel adjustment to go further to clear thick thighs. In my case, I found a low enough seating position, at a cost of some ungraceful entries and exits.

The FR-S is considered a 2+2. That means there are rear seats in this car. The bad news is that there is no room behind me at all. They are fine for small children and infants, but average sized adults would pass on sitting in the back. Trunk space is a bit more generous, however. Perhaps shoving a few duffle bags for the weekend would do in the FR-S. The rear seat folds down for extra stuff, but only leave you with just a driver and passenger – which works out just fine, really. 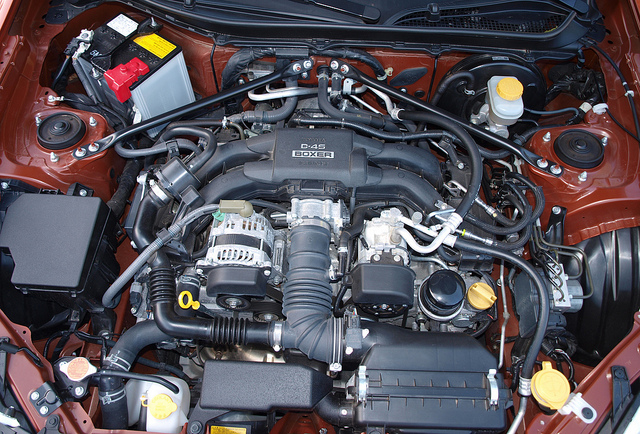 Underneath the hood is a true collaboration. The block is all Subaru – a 2.0 liter horizontally opposed four-cylinder engine. However, the D-4’s fuel injection system and other engine enhancements are from Toyota. This collaboration yields 200 horsepower with 150 pound-feet of torque. The engine is best described as “not bad.” It sounds great through the exhaust pipe, but I was hoping for more teeth from the motor.

If you choose the six-speed manual gearbox, the engine would show you its teeth. Instead, the tester had the six-speed automatic transmission with manual modes on the floor shifter and through the paddle shifters on the steering wheel. In normal mode, the transmission shifts smoothly, but restrains the boxer engine from making dramatic and epic moves. Press the button into Sport, and the shifts become jerky. Even if you work the paddles to change gears, Sport mode still makes you feel each gear change as retaliation. There is another mode – VSC Sport. That keeps the FR-S in Sport mode, while turning off the traction control. If you are a brave soul, you might want to try this once before you commit to it on further jaunts.

Perhaps the most controversial part of the driveline is the driving wheels. Normally, a Subaru boxer engine sends power to all four wheels, with a front wheel bias. Toyota and Subaru agreed to make this a rear-wheel drive vehicle only. This placates the sports car lover, as the myth is rear wheel drive makes for a better sports car. Somehow, it works.

Being a sports car, driving dynamics are usually under high scrutiny. With a rear-drive model, the key emphasis is on handling. It handles well – near flat through the corners, hugs the road and send grip down to its Michelin Primacy HL tires. The tires were surprisingly quiet for a sports car. The steering response is reactive and perfectly weighted. Coupled with a great steering set, the FR-S can advertise it has the moves necessary for sports car credibility.

There are some trade offs with having great handling. The overall ride can be described as thud solid. The FR-S hates cracks, gaps, lumps and potholes. The suspension is simply too firm to forgive any road imperfections out there. You also get plenty of noise in the cabin, but not enough to drown the Pioneer audio system. Then, there are the brakes. They do stop in both normal and panic situations, but with an excessive amount of boost from the master cylinder.

Fuel consumption is actually quite good from the boisterous 2.0 liter boxer engine and the six-speed autobox. Does 29.0MPG sound good to you? It certainly was a huge surprise for a sports car.

The cost of admission into the sports car world is $25,255 for the manual gearbox version of the FR-S. This automatic version ran the tab to $26,355. That is a $1,100 gap between true enthusiasm and semi-enthusiasm, depending on how you view the two gearboxes.

What about the FR-S? Is it what it is supposed to be? In a sense, yes – it is a sports car. It has the stance, the low-slung body and low interior. It handles well and has the sound that makes it a sports car. Let us not forget that it is somewhat practical by virtue of expanding a small trunk for the sake of the rear seat.

But, is it a good sports car? This is where it gets a bit muddy. The FR-S tries hard to be a sports car. To be one, it needs to be legendary. Some sports cars became legendary right off the lot – the Mazda MX-5 Miata, for example. However, if the sports car crowd has questions about a certain vehicle’s virtues, then you wonder if the credibility is not there yet. IF it has the legend for a strong following where everyone who is a driver agrees that the FR-S belongs in the same air as the Miata, the Genesis Coupe, the 240Z and others before it.

The FR-S is a decent effort. Its followers will defend it to the hilt. However, it needs refinement. It needs to be engaging for both enthusiasts and those who want to be. It is almost there – almost.