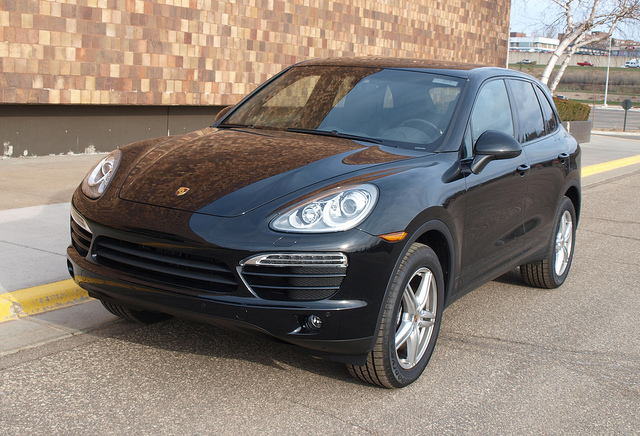 What exactly is Porsche all about these days?

The quick answer would be the 911 – iconic, rear-engine and still shaped as it did for the past 50 years or so. Though there had been products that were different than the 911, they had been mostly sports or GT coupes. In the past 10 years, the idea of a Porsche had been stretched to encompass crossovers and four-door hatchbacks.

The second-generation Cayenne is one of those vehicles that have stretched the brand. To understand this oxymoron, the Cayenne is a crossover/SUV stemming from a collaboration with Volkswagen and Audi, hence sharing the same platform as the Touareg and Q7 respectively. The 300 horsepower 3.6liter V6 is also a collaboration with VW and Audi, shared by many products across the board at Volkswagen AG.

There are certain qualities in this second generation model that corroborates this notion. You can hear the exhaust as it roars, even in city traffic. The V6 is competent and can motivate 4,475 pounds of Leipzig-built crossover. The V6 is connected to an eight-speed Tiptronic S transmission sending power to all four wheels.

When you drive the Cayenne, you understand the debate of whether it is truly representative of the brand. The ride is compliant, with no firmness present as expected from Porsche. You roll and lean through the corners, despite some gathering in by its suspension set. The steering setup trended slightly towards vague in feel and response. For the average driver, this would be considered just fine. Braking was decent with good action from the pedal.

Perhaps the Cayenne has the biggest and most comfortable cabin of any Porsche – plenty of space for 4-5 adults between two rows. The seats are surprisingly big and have plenty of adjustments for all drivers. The upper back area tends to be bit stiff, but the cushions are well bolstered and wide enough to accommodate a variety of drivers. 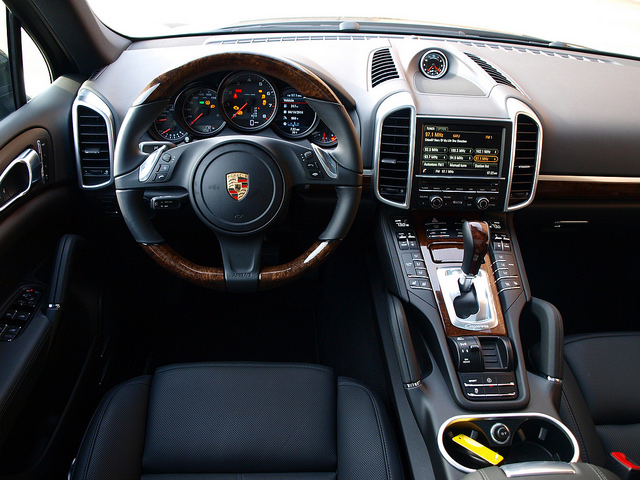 It also features the second most complicated arrangement for the driver of any Porsche – just behind the Panamera four-door hatchback. There are plenty of buttons to comprehend – ranging from suspension and transmission setups, all-wheel drive controls, climate and infotainment system controls and so forth. You do get Porsche’s five-dial instrumentation, with one of the dials being a switchable TFT screen. The drawback is that the steering wheel covers about two of the five dials for the driver to read.

Still, when you come face-to-face with the Cayenne, there is definitely something Porsche about it. When the lineup went through its facelift, Porsche wanted familiarity within its enlarged body – and got it. The rear has a bit of a Porsche bustle to it – a bit more leaning towards the Panamera than the 911. While the front doors open wide, you might find the rears on the small side to get in and out of. Outward vision is clear to the front and surprisingly good in the rear. There is plenty of cargo space for a road trip for four – something that would be a surprise for any Porsche owner.

The Cayenne with the V6 and AWD starts at $50,575. In typical Porsche fashion, when you start asking for what you want, the price escalates at an extraordinary pace. Our example rang the registers at $75,190. One had to wonder why a basic Cayenne yielded almost $25,000 in options.

The “base” Cayenne model is just the starting point for Porsche’s mid-sized luxury crossover/SUV. There is a choice of engines, fuel types and propulsion systems to wade through. There is a turbocharged V6 diesel, a gas-electric hybrid V6 with a total output of 380 horsepower, a 400 and a 420 horsepower V8, and a couple of turbocharged V8s yielding 500 and 550 horsepower respectively. If you have to ask, the top base price for the Cayenne goes to the Turbo S with a base sticker price of $146,995. 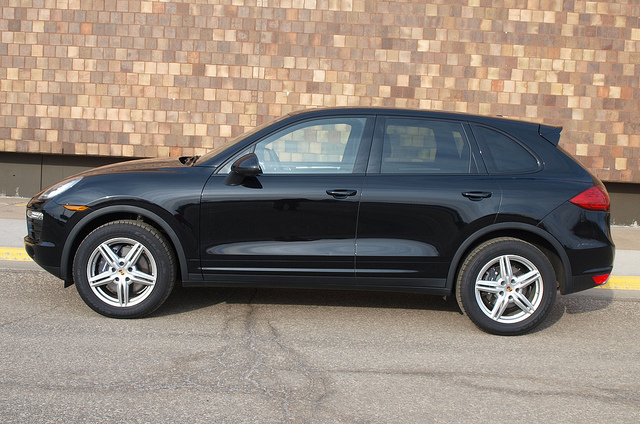 To say that the Cayenne is just like any other crossover/SUV in its field would belittle of its presence in the marketplace. There is enough Porsche identity, feel and performance to ensure a special place amongst luxury mid-sized crossover/SUVs. All you have to do is listen to the exhaust note.