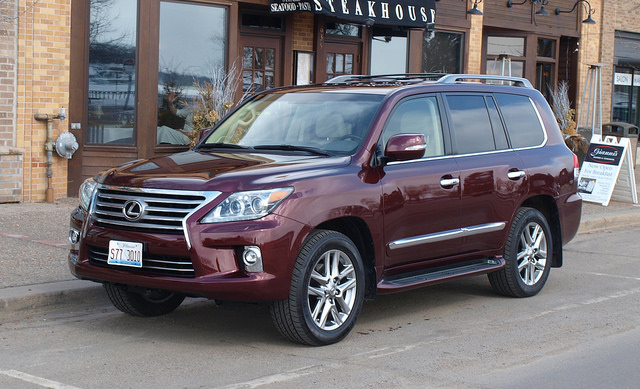 Take these three words/acronyms and think for a moment. What is the first thing that comes to mind? Cadillac Escalade is one. The Range Rover is another. These sit on top of the big luxury SUV universe because of their reputation, image and personality. The Escalade is made for riding in style, while the Range will even take you off the beaten track.

Sure, there are other big luxury SUVs to consider. We can name each one, if you like. But, for the purpose of this publication – there is one that is worth mentioning.

You may have seen the Lexus LX 570. You might have heard of its less expensive twin – the Toyota Land Cruiser. You probably have heard of its reputation of being one of the most capable vehicles in its class. So, why would you even consider the Lexus?

Because it starts off by being quite substantial. Though it is just 197 inches long, the LX stands 75.6 inches high and 77.6 inches wide. It also weighs 6,000 pounds. Some of these numbers are staggering, if you have never experienced anything like it before.

To differentiate itself from the Land Cruiser, Lexus adds the spindle grille up front, bespoke taillights out back and plenty of chrome and satin finishing all around. Twenty-inch “liquid graphite” alloy wheels finish the Lexus look, shod with Dunlop mud-and-snow tires. Familiar attributes remain, such as big doors and a split rear tailgate. The LX is intimidating, but shows its glamorous side making it somewhat civilized. 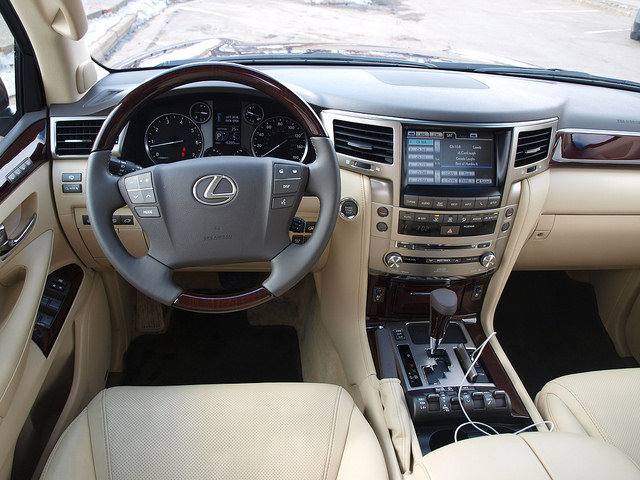 Step up into the cabin and you will be treated with absolute luxury. At least, it appears that way. The Lexus cues are there – big dial instrumentation, a touch screen for the infotainment system, leather and wood finishing. However, you are assaulted with buttons and switches that the average Lexus owner would not use. The Crawl Control rate switch, for example. A technical off-road driver would know what to do with that switch, but not everyone understands it. It is suggested to read the owner’s manual before trying out one of these buttons or switches. You might that one of them would be useful at the right moment.

For front row occupants, you sit on big thrones positioned high above the traffic. Power adjustments for rake, height, recline and lumbar support will enhance your lofty position behind the wheel. The seats offer a balance of support and comfort, but will adjust to you in due time. You might even enjoy the cooler that resides in the center console. The high position offers great outward vision, including two huge folding mirrors. The big upper liftgate and its enormous window help rearward vision.

Second row occupants have great headroom and ample legroom. Adults can enjoy being driven around, once you fine-tune your position behind the driver and front passenger. There is a third row that folds along the side of the cargo hold. A power operation brings down each half of the row, but you have to manually anchor each seatback to its upright position. The third row is really made for children with not enough legroom for adults to get comfortable.

The LX 570 came with a nineteen speaker Mark Levinson audio system that emits a wonderful sound. Lexus offers an app suite for its Enform system that connects to your smart phone for an enhanced experience whether you need a place to dine out or to add music options to your ride. The LX already offers HD Radio, SiriusXM satellite radio and Bluetooth connectivity to your phone. Rear seat occupants have their own infotainment system with dual screens behind each front seat, wireless headphones and their own selection of entertainment – including DVDs and gaming consoles. 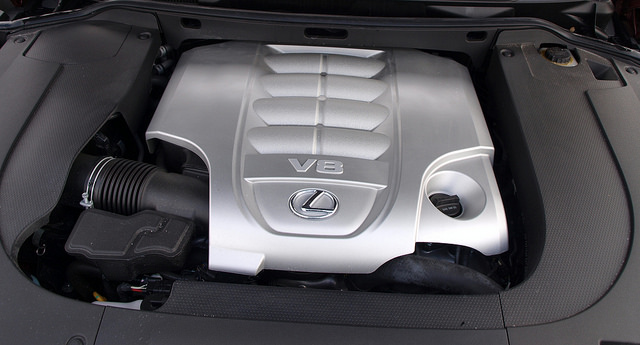 The 570 badge denotes Toyota’s biggest engine available for passenger vehicle consumption. The 5.7liter V8 is a beast, with 383 horsepower at your command. It has a mighty roar that is a bit muffled due to the sound deadening inside the LX. Push the throttle, and you will feel this V8 take off like a rocket running short of the red line. If you want to tow something, the LX can pull 7,000 pounds of boat, snowmobile or anything behind you using its 403 pound-feet of torque to do so.

A six-speed automatic transmission with a feature called AI Shift Control – AI meaning “artificial intelligence” – connects to all four wheels through a proven TORSEN system and a limited slip differential. To say the least, grip is very good with this system.

Because it is a Lexus, you expect nothing less than a soft ride. There is ample dampening to absorb potholes and cracks on the road without sending it through the cabin. Adaptive variable suspension and active ride control also help in ensuring a comfortable ride on any surface – even if you are out on the highway. A soft suspension set has its downsides, however. Expect plenty of roll and lean in the curves, slight pitching on uneven road surfaces and the full force of three tons of SUV when getting around obstacles.

A big steering wheel does not help maneuverability. Therefore, ruddering the LX can be a handful when doing tight turns with a lot of wheel work to go through. Steering response is quite good, despite the big turning effort to get there. On-center feel is just fine. Braking the big LX is another concern. Pedal feel and response are on the light side. Normal stops are fine, but it took longer with less effort to bring the LX to a finish. Panic stops require the anti-locks to grab 6,000 pounds of SUV to a halt with plenty of front-end tip. 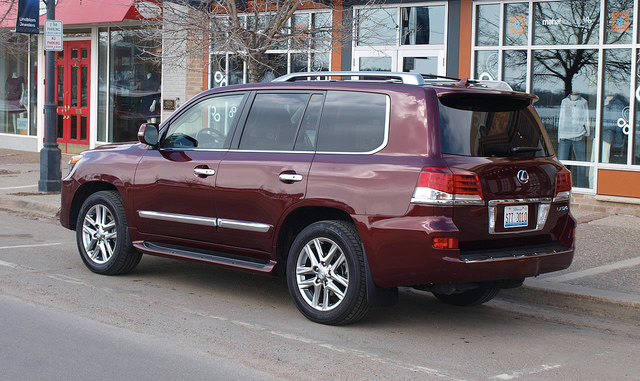 If you are looking for an economical SUV, the LX is not it. The 6,000-pound SUV only managed an average of 12.7MPG. Lexus states it would average 14MPG.

If you must look at a big luxury SUV, there are some questions to consider. What are the advantages of buying a Lexus LX 570 over the competition? Lexus does a good job in post-sales support and you do have the off-road heritage of the Land Cruiser in a more luxurious package. Yet, you could also see what the competition is doing – Cadillac, Land Rover/Range Rover, Mercedes-Benz, Lincoln, Infiniti and so forth. For a small volume segment, there is a lot of competition doing things differently than the others.

Why buy this over the Toyota Land Cruiser? You save several grand if you got to a Toyota dealer, but you have to admit you love badge snobbery and the advantages of buying a Lexus.

In all, consider the Lexus LX 570 if you want to play in the high ticket SUV market. If it is your kind of big luxury SUV, then make it yours.