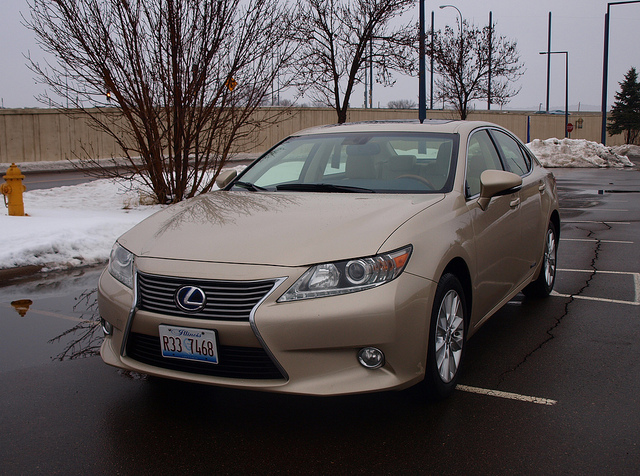 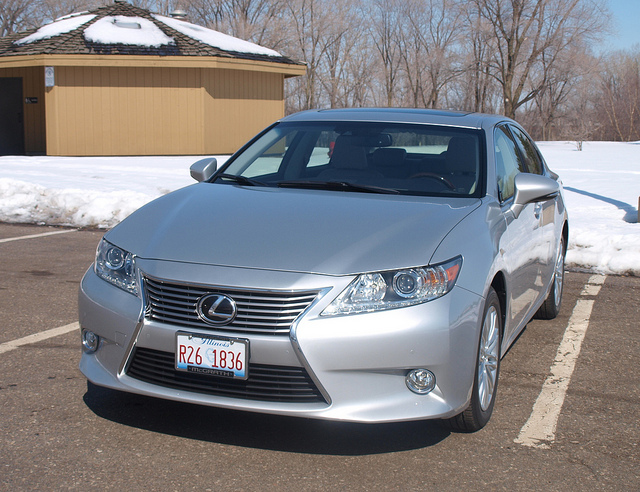 Do you remember when Lexus was introduced in 1989?

Toyota’s luxury brand was indeed a breakthrough at a time when the segment was about to get a serious boost. Yet, our memory banks concentrated on only one product from Lexus – the LS 400. Granted, the LS was its own breakthrough model – a V8-powered flagship sedan that embodied everything its engineers put into it to match the competition. The big LS took the world by surprise.

However, we might have remembered that there were two models on the marble-finished showroom floors of Lexus. Certainly the LS 400 got all of the attention, but we may have forgotten about that smaller sedan that sold alongside the big flagship. Some might say it was quite unremarkable – a mid-sized four-door sedan with a frameless windows, a 2.5litre V6 and acres of luxury inside. If you look closely, it was akin to the Toyota Camry. In fact, it was part of the Camry family back in Japan.

From there, the ES got even better. Sleeker bodies and larger V6 engines helped raise the ES’s profile as sales gained traction for both the premium sedan and the brand as a whole. While it did attract buyers not willing to splurge on the big LS, the ES also gained a reputation for being a bit on the bland side. It is a shame, really, as it continued to be the best selling sedan for the brand – the second best-selling model behind the RX crossover.

Perhaps the criticism was apt since the segment itself has changed. At one point, the Buick LaCrosse outsold the ES – a surprise amongst luxury car aficionados. The sub-$40,000 Lexus mid-sizer also attracted the likes of Hyundai, Chrysler, Acura, and, to a small extent, Lincoln. Instead of being a benchmark, the ES became a target.

Lexus knew that the next ES had to be better. It was tasked to shake off its image of being an overpriced, Camry-based mid-size premium sedan. It had to not worry about the likes of Buick, Hyundai, Acura, Chrysler, Lincoln, Volvo and anyone else in its wake.

Twenty-three years later, we are now presented with the sixth generation ES.

Normally, when a vehicle is reviewed, a single representative model from that lineup would be evaluated and the entire review is based on that particular variant. This is going to be a bit different. Instead of one Lexus ES, there were two variants up for review: The ES 350 and the ES 300h.

The question no longer becomes whether this new and improved luxury sedan is worth the price on the sticker. Simply put – which ES model is worth owning.

Luckily, both models share the basic design with just minimal differences. The overall look of the ES was executed with moving the design bar for its front-drive mid-sized sedan further. It starts with perhaps the best execution of the brand’s signature spindle grille. The way it sits up front, without exaggeration of afterthought, is spot on. Flanked by a lamp housing with running LED lights, the front end is an invitation to drive this 3600-3700 pound luxury sedan.

Recent Lexus styling lends to a near flat side profile. However, the ES shakes things up with a C-pillar that is handsome and functional. You would think it is a coupe with its glass ending at a “lip” and the fastback-like tail. In all, the new ES has a standout look to go along with the intention on being a leader in its class.

To find the difference between the ES 350 and ES 300h, you have to look beyond the badge on the trunk. The Hybrid has its requisite badges, along with a blue-trimmed Oval-L. The ES 300h also adds exclusive alloy wheels and tires, a rear spoiler and a lower rear bumper extension to hide the exhaust pipes. 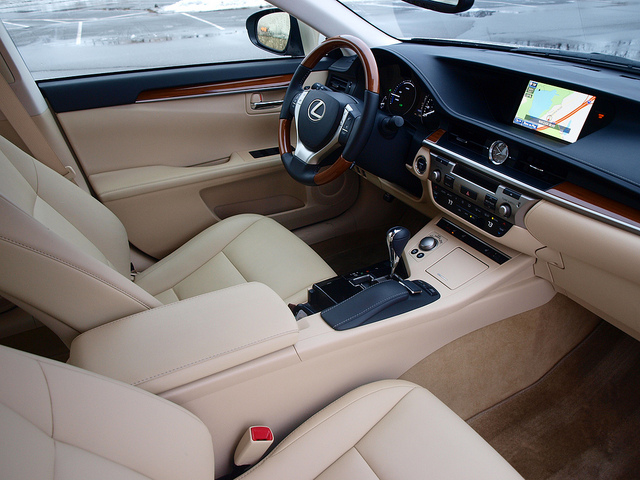 Step inside and you will find the latest in Lexus interior design. The big instrument binnacle has gauges and screens worth reading on the fly. On the ES 300h, you can switch from a tachometer in Sport mode on the Drive Mode Select knob to an energy use gauge in Eco. Otherwise, it remains a tachometer in the ES 350. In the middle, there is the requisite screen housing the navigation and screens induced by the Remote Touch mouse on the console. Every knob, switch and control simply work right to the touch, though the Remote Touch can be a bit fiddly on occasion, especially when setting presets on the radio.

Regardless of model, the seats are just right for the ES. There is enough bolstering to keep you locked in on the curves and enough adjustments to make you comfortable anywhere you point your chosen ES. The space inside is quite huge with seating for five average-sized adults. Middle passengers would feel just fine in the back seat. 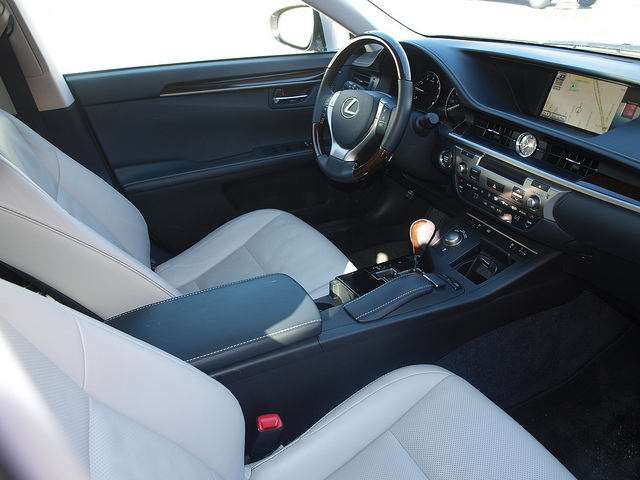 Between the ES 300h and the ES 350 are some marked differences inside. The V6 model means using dark burled wood grain and perforated leather, especially in the Luxury package on the ES 350 tester. The Hybrid denotes a more sustainable atmosphere. The lighter weight and supple NuLuxe seating with bamboo accents induces guilt-free luxury as a reminder of your stewardship of the planet.

No matter which environment you drive in, your soundtrack is piped through eight premium quality speakers. Your choice of soundtrack comes from a choice of HD Radio, SiriusXM satellite radio and Bluetooth audio streaming. Both ES models had navigation with Lexus Enform to help guide you on your way. 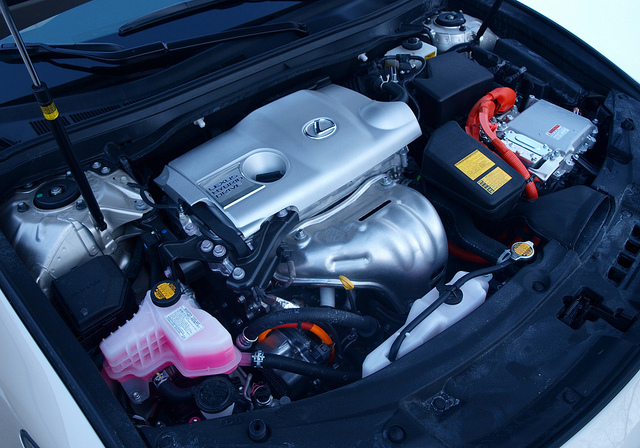 The Lexus Synergy Drive system makes its first appearance in the ES. To mark the occasion, the electric motor is mated to a 2.5litre four-cylinder engine. This also denotes the first four-cylinder engine to be offered on the ES in North America. With a combined 200 horsepower, both engines motivate this 3,700 sedan without fail.

To help enhance the drive itself, the Drive Mode Select knob in the console will do the trick. You can put the system into Sport, where it de-emphasizes the electric motor in favor of more power from the gas engine. For optimal efficiency, leave the car in ECO Mode. If you worry about efficiency, the EV Mode kicks in when you are not using the throttle in slower traffic. You can either push the button next to the Drive Mode Select knob or just let the Lexus Synergy Drive system do it for you.

There is also another first for the ES: A Continuously Variable Transmission is connected to the Lexus Synergy Drive system. Compared to most CVTs, this one is a proven unit that knows how to work the power bands on both the gas and electric motors. It is unobtrusive in shifting and facilitates the switching of the motors without any “bump” in power transfer. 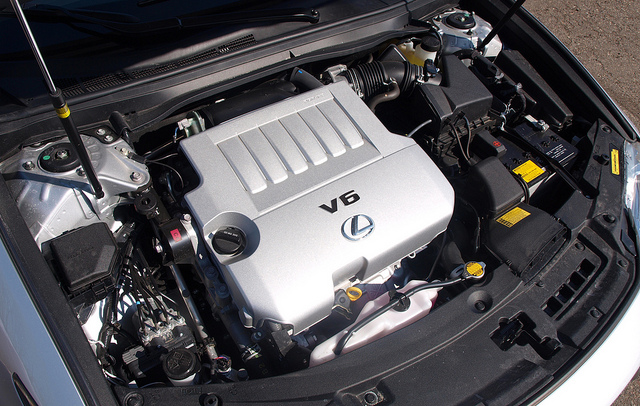 On the non-Hybrid model, Toyota’s venerable 3.5litre V6 offers 268 horsepower on tap with 248 pounds-feet of torque on the low-end. The difference is dramatic between the two drivelines – you can hear the ignition turn over and the V6 rumble underneath the hood. The response from the throttle is also immediate. It gives the stately midsized luxury sedan some life. The V6 gets a six-speed automatic transmission. Power goes directly to the front wheels on both the ES 300h and ES 350.

When driving both the ES 350 and ES 300h, the best way to describe the experience on both models is “soft.” One must consider how soft you want your driving experience when choosing between these two drivelines. The V6 offers up a small dose of liveliness. The Hybrid feels balanced, though a bit numb in terms of feedback. Oddly enough, the ES 300h offered a much smoother ride than its V6 counterpart.

In the corners, both the V6 and Hybrid felt soft, but controlled. The battery pack in the ES 300h actually kept the rear end in check, through tracking was not bad on the ES 350. Steering action was practically same with some numbness in response and feedback. The biggest difference was felt when stopped each model. While the V6’s brakes felt a tad sharper, the Hybrid’s stopping power was challenged by the regenerative braking action. In all, the Hybrid took longer to come to a stop in normal, panic and “winter” conditions.

It is a good thing these two ES models were tested at the tail end of winter. When the roads are less than drivable, the anti-lock brakes and traction control systems keep the ES in check. There is something very interesting between these two models – the tires. While the Bridgestone Turanzas on the V6 struggled for grip, the Michelin MXM Primacy tires on the Hybrid held the road better.

The biggest difference between the two drivelines comes down to how much fuel was sipped in the process. The V6 managed a 24.0MPG average – a bit better than its competition. Though Lexus advertised a 40MPG consumption rating for the ES 300h, the reality was a tested average of 32.4MPG.

Price-wise, both models come in under $45,000 with all of the boxes ticked on the order sheet. The gap between the V6 and the Hybrid was $1,000 as tested, with the more sustainable model yielding the higher sticker price. The ES starts at under $37,000 for the V6 with a $3,000 premium for the ES 300h before the options list is presented to you.

In all, the Lexus ES offers a great choice for anyone looking for a top shelf, front-wheel drive sedan with badge appeal and a full swath of luxury. It is inoffensive and elegant at the same time.

To answer the question of which driveline to choose, you have to take a few steps back and ask even deeper questions. Do you want the ES 300h for its sustainability and fuel economy? Or, do you need the ES 350 so you can hear the ignition kick in and feel the V6’s power? Either way, you get a nice mid-sized, front-wheel-drive luxury sedan that is simply smooth and comfortable.

This Lexus ES is far from the gussied up Camry of 23 years before, when it had to share showroom space with the incomparable LS 400. Now with a choice of power, it presents a good purchasing case amid a wide variety of models for those looking for a spacious and comfortable luxury sedan under $50,000.

It is your choice, really.