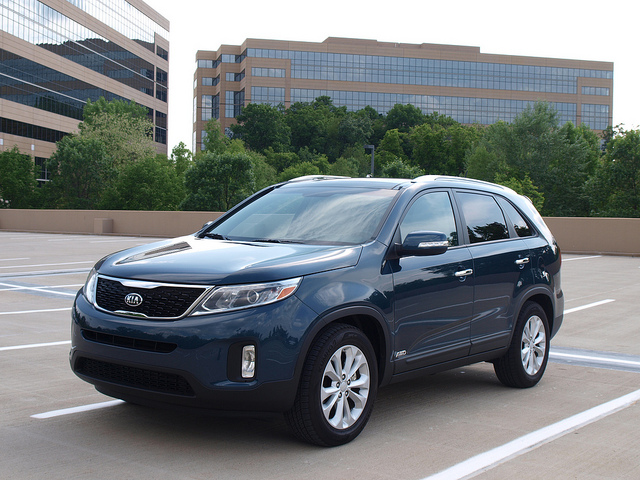 Improvement is the way a vehicle can achieve its ultimate goals.

This should not be confused with “change.” The approach North American automakers had were change – from obvious visual changes to shuffling of specs, all in the name of competition. European and Asian manufacturers did not engage in constant change, but rather a subtle approach towards improvement to maintain product continuity.

Is change a change thing? If it is meant to improve the product – absolutely!

Case in point: The Kia Sorento. Since 2010, the second-generation mid-sized crossover went by on subtle changes. This was after a successful launch of the 2011 model year product that made everyone forget about any previous attempt at this model was ever produced. Having driven a few examples of the current generation Sorento in its first model year, I enjoyed what Kia brought to this segment with a comfortable family hauler at a value-loaded price.

For the 2014 model year, a much needed refresh for the Sorento was executed. The changes were both visual and skin deep. Did all of these changes improve the breed?

If you compare the 2011 model with the new one, you will notice that the basic roofline and greenhouse has not changed. It is below the lower edge of the greenhouse that Peter Schreyer, Kia’s design head, and his team went to work on. With all of the new lines, creases and textures combined, you might conclude that the Sorento has become bigger in almost every aspect all around.

The front end is bolder, with its “Tiger” grille enlarged and now incorporated with the LED headlamps. Below it is a deeper lower bumper, upright LED fog lamps and integrated air dam. The tailgate now emulates the Audi-esque scallop dividing the tail lamps and license plate area first seen on the Optima sedan. Even the tire/wheel combination is larger – thanks to eighteen-inch alloys fitted with Kumho tires.

There is a trick to the overall look – though it seems bolder, you still have one of the lowest step-ups in the mid-sized crossover game. This is still remarkable even with an all-wheel drive setup. More remarkable is the fact that you get that fondly remembered thud when you close each door. Something that recalls the car you first drove in – a nostalgic feeling, indeed!

For a luxury touch, the outside mirrors are power retractable. That is a common feature on some luxury crossovers and SUV, but there is a twist in this Sorento. If you unlock the vehicle twice, the mirrors flip out to its normal position. Lock the Sorento twice, and the mirrors retract back. Pretty nifty feature for sure! 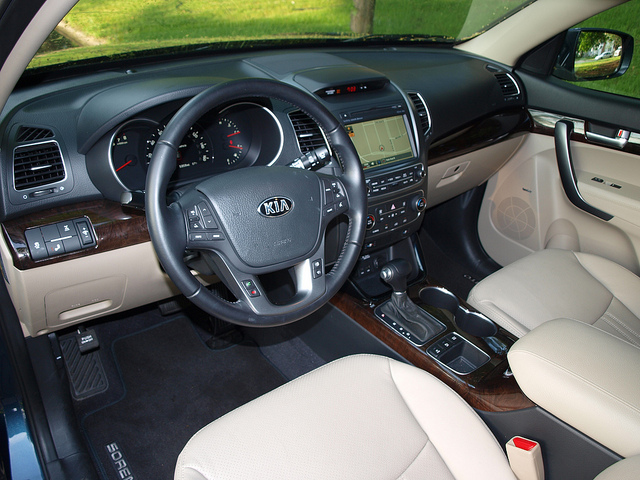 Step inside, you will notice more of the changes created from the work of Schreyer’s team. The instrument panel, center stack and console have been gussied up a bit. More chrome and woodgrain trim add to the level of luxury expected in the EX trim. Inside the instrument binnacle is a TFT speedometer screen with an interchangeable center display. The readouts vary from trip information, fuel economy, audio system readouts and a compass. There are other personalized vehicle settings that can be done within the center screen, as well.

The center stack has improved to accommodate switches that are better to the touch and a huge UVO eServices-driven screen housing the navigation screen, audio settings, reversing camera screen and climate control readouts. The good news is that every switch is within reach of the steering wheel, though some basic audio and phone controls are right on the steering wheel.

In case you have not been paying attention to the infotainment world, UVO eServices is a Microsoft-driven system that connects your devices and integrates them either through the USB port or Bluetooth connection. There is also a lot more available through UVO eServices that could be driven from a smart phone application or further into the infotainment screen. If you wish to just listen to the radio, you have plenty choices including HD Radio and SiriusXM. Sound is piped through ten Infinity Surround Sound speakers throughout the cabin.

The EX accommodates you with leather seating for five adults. The driver and front passenger have enough bolstering to keep you planted. The driver gets power adjustments, including lumbar support. The front passenger can have power seating operation as part of the Touring Package for the EX. Rear seat room is great – the best way to describe the second row space. Third row seating is an option, but it is not a requirement, especially for families of four to five or the active person who rarely plays sober cab. Without the third row, Sorento owners will enjoy a huge 39.6 cubic foot cargo hold. Lastly, the Touring Package offers up a panoramic sunroof with a power shade that covers the entire interior ceiling – a nice touch on clear days and evenings. 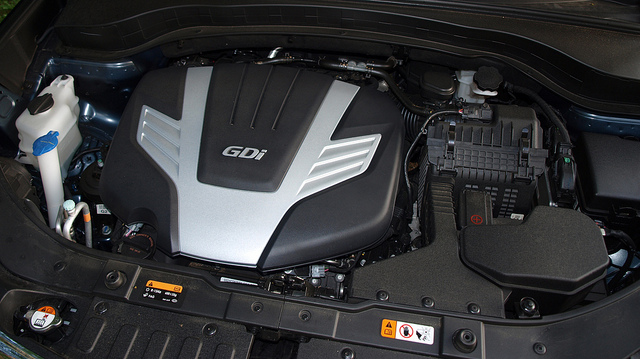 The Sorento offers the choice of a four-cylinder or V6 engine. This EX enjoyed the power of the latter engine – a new 3.3litre V6 with direct injection. With 290 horsepower and 252 pound-feet of torque on tap, throttle response is strong and the V6 responds with plenty of thrust for acceleration. Once it settles down onto cruising speed, the V6 is quiet and smooth. A six-speed automatic transmission facilitates the V6’s power onto an all-wheel drive system that features a locking differential. Shifts are very fluid and matches well with engine speed and the final drive wheels.

Early models of this generation were agile, soft and light on its feet. To match its largess on the outside, the Sorento felt a bit more solid all around. This was not an issue of weight gain as it is fine tuning the Sorento towards being more durable along with expanding its capabilities. For riding a bit “large,” the Sorento felt more down to Earth in its feel on the road. Road imperfections, cracks and bumps were absorbed with minimal feedback and road noise. It is softly sprung, which makes things more comfortable for anyone on board.

When you take the curves, the Sorento leans and rolls a bit, but not enough to cause fear of losing control. It is kept quite tidy through most roads. Grip is quite good for those Kumho tires, though they are more designed for in-town and highway use than going onto less stable surfaces. Steering action is a bit light and response could be a tad slow. Feedback is not bad from the wheel. Brakes are very good, however. The Sorento stops well in both normal and panic situations.

When it was introduced in 2010, this generation of Sorento was lauded for its improvement in fuel economy. In the 2014 model, the V6 Sorento turned an average of 20.7MPG. In itself, this is remarkable considering most mid-sized crossovers and SUV find it hard to break 20.0MPG. 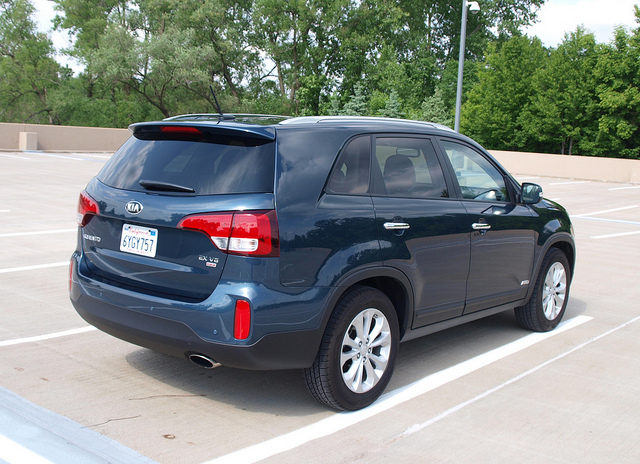 When it comes to the bottom line, the Sorento starts at just under $25,000 for a front-wheel drive, four-cylinder LX model. The EX actually starts at $30,850 with our AWD tester with the Touring Package will set you back to $37,050. If you really want that third row, it will cost you an extra $1,200. The most you will spend on a Sorento is $41,850 on the AWD version of the Limited model.

The Sorento has certainly improved over time. Within its second generation, these marked improvements gave Kia a strong competitor in the mid-sized crossover/SUV segment. For families or active types needing a good-sized vehicle with plenty of interior and cargo space, the Sorento certainly does not disappoint.

Perhaps the greatest improvement above all of this is the fact we are talking about the Kia Sorento and singing its praises. This is just more than change – it a paradigm shift. To say that the Sorento is one of the top choices in its segment speaks volumes on how Kia has progressed since its first arrival in North America a couple of decades ago.

When you improve upon a good product, you make it better. It is a simple formula that is worth repeating across every industry. In the process, you change minds towards liking these improved products.

In a nutshell, that is the Kia Sorento.