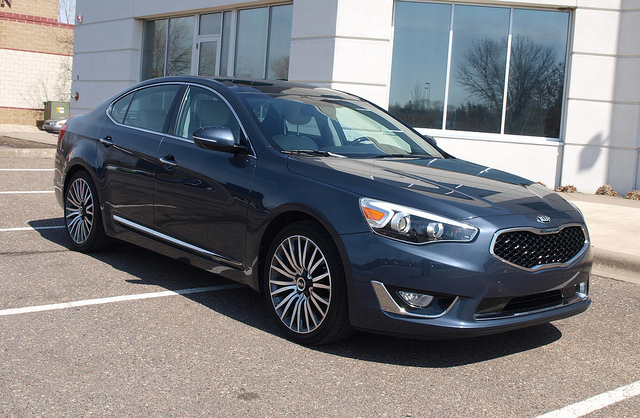 How does a company remake a full-sized sedan?

Consider what Kia started with. At a time when the design language had many dialects, our market was offered the Amanti, also known as Opirus in other countries. It is hard to describe this effort – front-wheel drive, V6-powered and room for five adults. It was competent underneath the skin, but what we actually saw was not pretty.

For the sake of bandwidth, I will not describe the Amanti to you.

I have never driven one. Understanding its competency underneath its body and interior, there was a bit of hesitancy in wanting to drive one. Perhaps a feeling of embarrassment knowing that I would actually be younger than the average age of an Amanti owner.

Let us just forget about the Amanti. Kia replaced it with something even better looking, more spacious and more competent under the skin. Peter Schreyer’s design language translated perfectly here, as this car will now face a growing and more significant segment.

The new Kia Cadenza is large and in charge. It is as Kia decided to reset its big car program and erased the memory of anything before it.

This is a very good thing. One look at the Cadenza and you are hooked. It absolutely looks the part – premium, full-sized, upscale…practically every adjective used to describe this class. The tiger grille is beautifully integrated onto the new nose, flanked by Kia-shaped headlamps. It is a face that stands out, even amongst its own lineup. Other words to describe the exterior: Long, sleek, dramatic, rich, and more. Basically, Kia created a luxury car to distract you from even looking at the Chevrolet Impala, Ford Taurus, Toyota Avalon and its other rivals.

There are a few things that might disappoint you from the Cadenza’s image. The gas cap feels plastic. The trunk does not have a power pull-down button, something that is found on a few its rivals. However, if you pull the door handle, admire the nineteen-inch alloy wheels and open up the panoramic moonroof, then you forget about these detractive details. 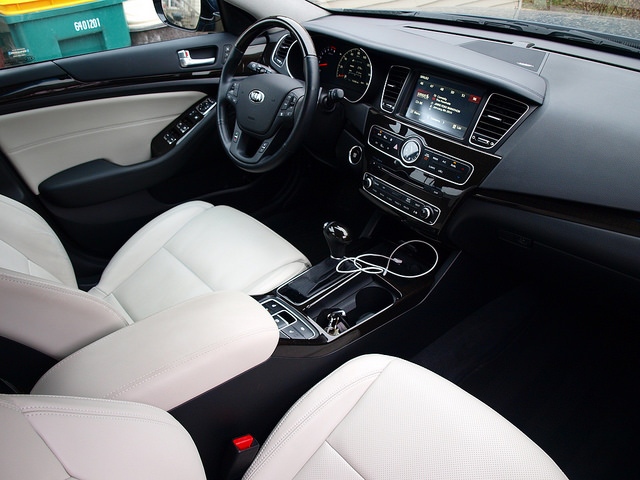 There has never been a better interior in Kia’s history than in the Cadenza. There is an upscale feel from touch points to design execution. Sitting anywhere in the Cadenza provokes questions whether this should be called the same brand as a Soul or a Rio. Yet, there are still reminders it is a Kia from the steering wheel switches to some of the graphics throughout the cabin.

There are many upmarket pieces that support the Cadenza’s aspirations. A bit more chrome on the power window switches and nicely finished knobs for the audio controls. A big TFT screen for the speedometer dominates a large instrument binnacle with a switchable center screen for trip and vehicle readouts. In the center is a huge touch screen – the largest in any Kia for its time – that houses the infotainment and navigation readouts. Sound is channeled through twelve Infinity speakers providing a clear and lovely sound for any musical genre.

On this Cadenza came a set of white perforated leather seats. The feel is glove soft on the bolsters, but not on the inserts. The seats are big and decently bolstered, but the inserts can be a bit unyielding on some drives. Rears seats are pretty large and the space offers lots of legroom. Tall passengers may find the headroom a bit of a challenge, but all other passengers will be able to enjoy limousine-like comfort. 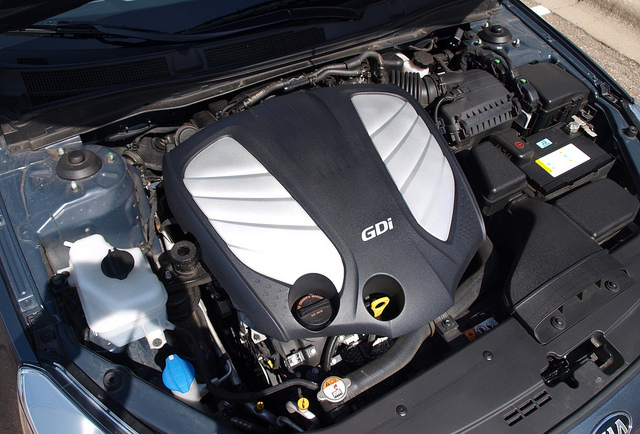 Kia’s 3.3liter V6 powers this 3,795-pound sedan with 293 horsepower and 255 pound-feet of torque on tap. This engine is matched up well with a six-speed automatic transmission powering the front wheels. There is plenty of power to get through traffic and relaxed enough for high speed cruises.

For a large, front-wheel drive sedan, you expect nothing but a nice, soft ride. The Cadenza delivers with a ride reminiscent of luxury cars of the past twenty or years, but with suspension that is tighter without an unyielding feedback. Lumpier roads will expose a minor flaw that tries to firm up a semi-floaty reaction to these road imperfections. Huge nineteen-inch, low profile tires help to absorb bumps and some of the remaining potholes out on the roadways.

Because of the suspension’s soft side, expect some roll and lean through the corners. There is balance in the suspension set that keeps the Cadenza under control within its limits, however. The Cadenza is steered by a huge wheel that also has a soft feel to it. There is a bit of play on-center and some vagueness in keeping lanes. Turning is not bad, trending towards tight u-turns and decent reaction to other maneuvers. Brakes are also decent in both normal and panic stops.

Big V6-powered sedans are not exactly known for good fuel economy. The Cadenza is no exception, turning an average of 20.9MPG. The sticker states the big Kia would average 22MPG.

If you finally considered the Cadenza as your big full-sized sedan, expect to pay a chunk of change for one. A “basic” Cadenza Premium starts off at $35,900. This tester, with the Luxury and technology packages rang up the register at $41,900. For reference sake, the top-of-the-line Cadenza Limited comes with a sticker price of $43,200 with everything Kia could put into a car. 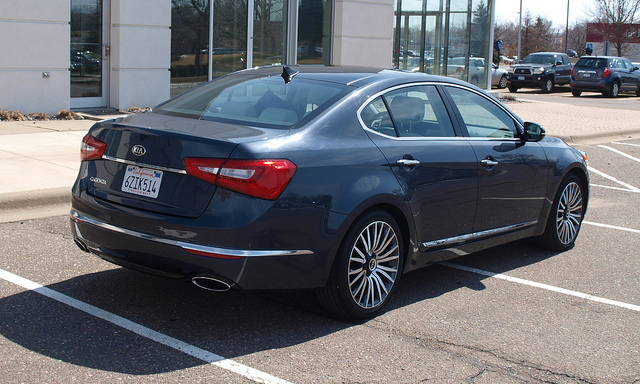 The Cadenza is a wonderful premium front-drive full-sized sedan. It drives soft for you to simply enjoy the miles without having to go into tactical alert mode. However, there is a problem. The Cadenza is no longer at the top of the Kia food chain, now that the K900 looms in the shadows. From a distance, both cars actually look the same. This is until you point out the differences between the two – including the savings one gets when purchasing the front-drive Cadenza over the more powerful, rear-drive K900.

The Cadenza is up against some really good competition. You will find plenty of worthy qualities, if you compare the Cadenza to the Impala, Avalon and Taurus. The reality is the price point. Most likely, you will spend $40,000 for one of these big premium sedans. This is where you choose very wisely with your money.

The Kia Cadenza appears up to the task amongst the big car crowd. Credit Kia for executing this accordingly.