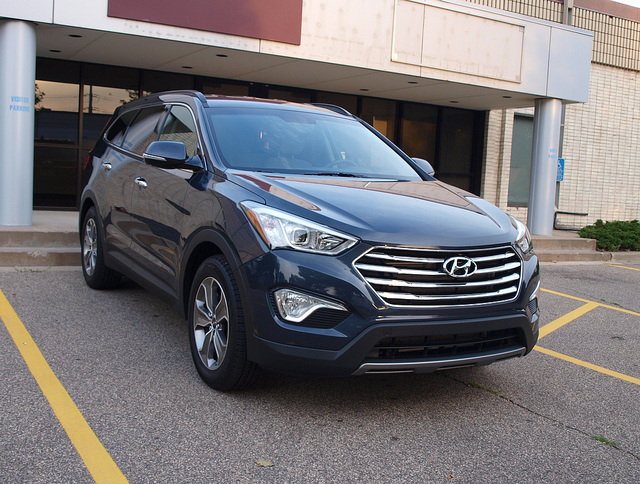 When it comes to mid-sized, three-row crossovers, Hyundai was not considered amongst the top models. It was not because the Veracruz did not cut the mustard – it did just fine. But, that is not considered “good enough” in the class.

When it came to developing the third generation Santa Fe, Hyundai wanted to play in the three-row segment. To do so, they developed two models that appealed to its traditional market (the two row Santa Fe Sport) and a three-row model to replace the Veracruz.

Visually, Hyundai make great steps towards visually improving the larger three-row Santa Fe over the Veracruz. The front end is almost shared with the smaller Sport, but with the different, more elegant grille texture. From there, the Santa Fe followed the latest Fluidic Sculpture design language to create continuity from bow to stern.

Doors open wide for both front and rear occupants. The rear doors in particular open wide enough for third row access. A huge liftgate helps to load everything you need for an adventure somewhere – from camping to an invasion of the mall. Eighteen-inch alloys with Kumho tires finish off the big Santa Fe’s overall look. 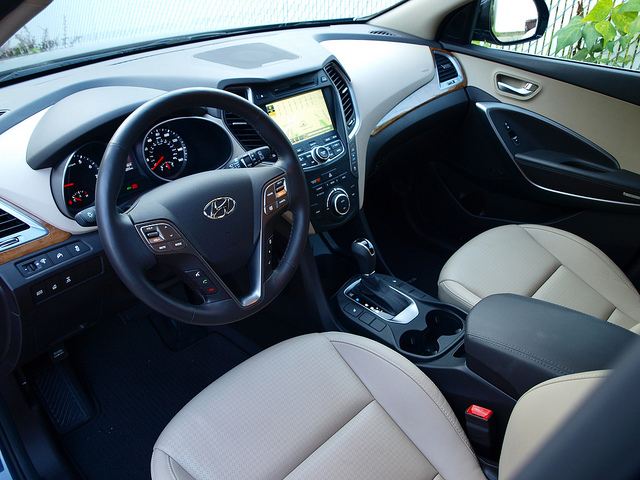 As with the latest Hyundai vehicles, the Fluidic Sculpture design language continues inside. Instrumentation is of a good size with secondary dials for engine temperature and fuel gauges inside of each dial. A switchable screen gives you all the information you need for fuel consumption and other trip measurements. Controls feel good and are easy to understand on the stalks, around the instrument panel and on the steering wheel.

New to Hyundai is the BlueLink telematics suite. BlueLink offers emergency services when your vehicle is in trouble or stolen, navigation assistance and so forth. The same services are available from a smartphone app, including remote access to your vehicle. BlueLink powers up an additional layer of protection – Hyundai Assurance Connected Care. This adds three years of connection to Hyundai from the car on maintenance and service issues and recording of vehicle collision information. These are powered by a series of buttons on the Santa Fe’s rearview mirror.

The center stack features a good-sized TFT screen that handles your navigation, audio readouts, vehicle settings, climate control and the rearview camera. Additional buttons and knobs help with these functions, along with touch screen access.

There is seating for seven. Up front are some big chairs for command of the road. They offer plenty of comfort and bolstering for long distance driving and short runs. Power lumbar support is available along with other power adjustments. Second row passengers get rake and recline adjustments – as long as you do not have anyone in the third row.

Third row does look inviting, but it is only for children. Actual access is really made for those who could climb around the second row to get inside. Once they do, they have their own climate control settings to adjust, along with their own vents. 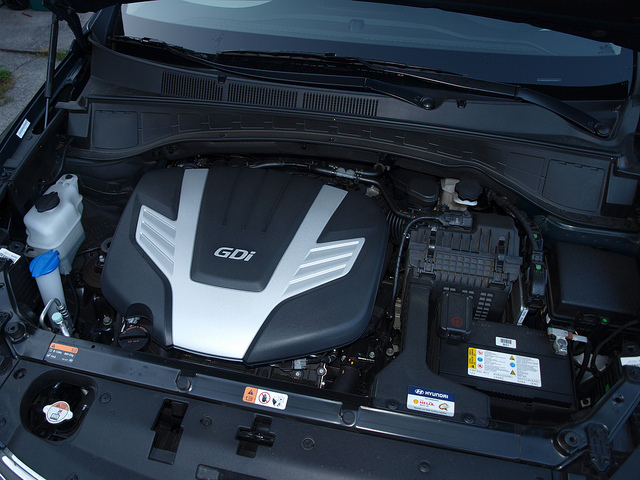 The big Santa Fe gets a real treat under the hood. Hyundai’s latest 3.3litre V6 serves up 290 horsepower with only 252 pound-feet of torque. It is a powerful engine worthy enough to haul 4,098 pounds of three-row crossover. Do not let that torque figure fool you – it is far from sluggish with a grunt to prove it. That grunt is good enough to tow up to 5,000 pounds behind the big Santa Fe. A six-speed automatic transmission sends that power to all four wheels.

The Santa Fe offers a smooth ride that absorbs as much as the road can dish out. Some road imperfections will be heard and felt, but expect to simply roll along quietly at speed anywhere you point the Santa Fe. Handling is on the soft side with plenty of roll and lean in the turns. It does gather up nicely, if you find yourself in a bind with the Santa Fe.

Steering is sharp and reactive. There is some play at center, but you could fix that with a button on the steering wheel. This button, called the Driver Selectable Steering Mode, will set the weight of the wheel depending on your driving style – Sport being the heaviest. Brakes are pretty decent with average stops in both normal and panic situations.

Big, three-row crossovers usually turn low fuel economy figures, even with powerful V6s and substantial towing capacities. Fuel economy averaged at 22.0MPG for the big three-row Santa Fe, which is not bad considering the weight and size of the vehicle. 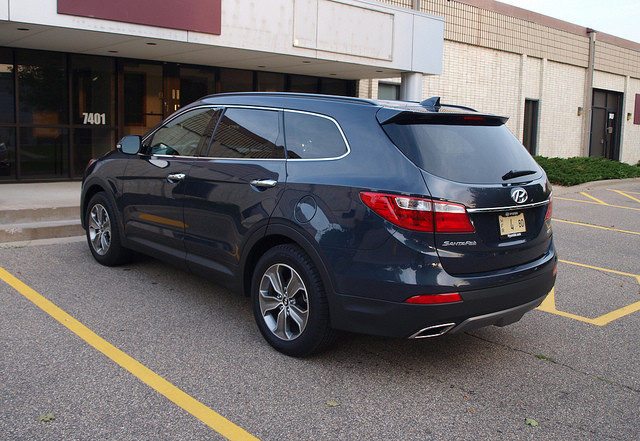 The entire Santa Fe family starts off with a price of $25,555 for a two-row Sport with a regular four-cylinder and front-wheel drive. To upgrade to the larger three-row GLS model, you will have to pay another $3,900 to do so. Our AWD GLS tester came to a sticker price of $36,390. There is another step in the lineup – the Limited. Pricing tops out at $38,855 for a fully loaded AWD model.

The new Santa Fe is not just an improvement upon the Veracruz, but part of a two-prong attack onto the mid-sized crossover/SUV segment. The execution is strong and the results appear to be quite good. There is the space, the size, the power, the supple ride…all are good arguments for getting one. Where I am conflicted is how it is seen as the front of the mid-sized three-row crossover class – something its predecessor never achieved.

If you choose the Santa Fe, you probably will not go wrong. The question would be if the new Santa Fe is the right choice in either the two-row Sport or the big three-row model. The choice is indeed yours.