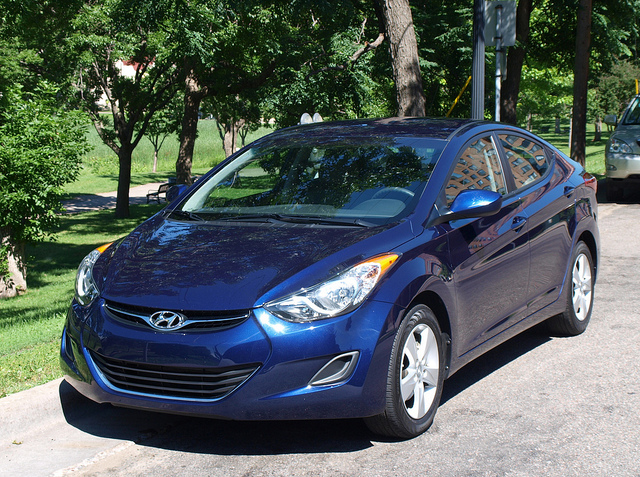 We love to live large.

It is American trait that we live it up the best way we can. It is reflected in our homes, our wardrobe, the way we like to party, and in our vehicles. If, all of the sudden, someone from above told us to live humbly – to let go of the excess and fabulousness in our lives, regardless of our identity – it would be a tough thing to do.

Last year, we saw something very interesting happen in the automotive marketplace in this country. Consumers reacted to the events of the “Arab Spring.” The result of the uprisings from the Persian Gulf to North Africa was an extraordinary jump in prices at the fuel pump. As soon as regular petrol reached $4.00-a-gallon throughout the Upper Midwest, we panicked.

In turn, automakers saw a growth in smaller vehicle sales. Compact cars began to fly off dealer lots. Most manufacturers couldn’t keep up with demand for smaller, more fuel efficient automobiles – perhaps, rightfully so. Almost every compact sold in the USA was either brand new or revised within the last 12 months. Each one sported new engines and transmissions, higher efficiency, roomier interiors and a jump in the number of amenities one could get in a smaller car.

The message we consumers took away from of last spring was very simple: Maybe it was time to downsize our lives.

Choosing the best one amongst the new compacts that came out in the past 12-18 months is not as easy as one might think. Each one had their own special attribute that made them stand out amongst the crowd. If one had a history of strong reliability, the other had better styling. If one had more comfortable seats, the other featured the highest level of infotainment available in a vehicle. And, so forth…

Perhaps consumers should rely on what the writers had to say. We are seen as authorities in this field providing everything from consumer information to complete fantasy for the enthusiast. Earlier this month, a panel of automotive journalists met to select the North American Car and Truck of the Year during the North American International Auto Show in Detroit. Which car was selected as the best by this jury? 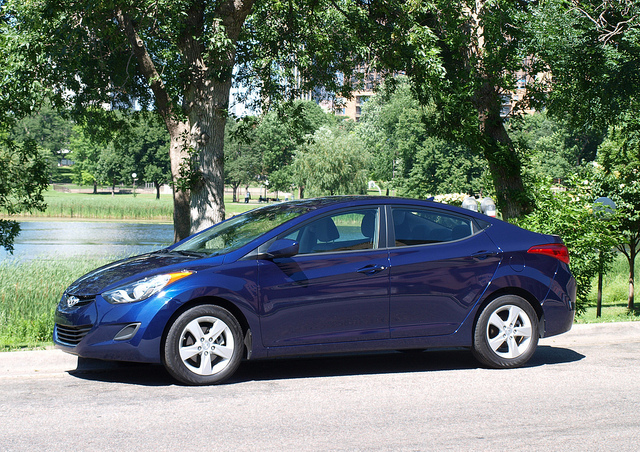 It should not have as come as a surprise that the Elantra took one of the biggest prizes of the year. Sales of this compact sedan helped Hyundai achieve some of the best annual sales figures in their 25-year history in this country. During last summer, monthly sales for the Elantra have hovered around the 20,000 mark – something that had not been seen by any single Hyundai model in a very long time. Now that production has switched to Hyundai’s Montgomery, Alabama plant, supply issues from last year have been eased while consumers are still checking out the Elantra despite even more new compact models set to arrive at competitor’s dealerships throughout this year.

Sales figures are great. Awards are terrific. But, is the Elantra a worthy choice in this strong and competitive segment. Is it the right vehicle to downsize your life in?

There is no question that Hyundai wanted to change the way compact cars are perceived. They did so by thoughtful engineering and design. In doing so, Hyundai went for a lower, more angular aesthetic to challenge the status quo amongst compact sedans.

When you look at it, you will notice how Hyundai’s “Fluidic Sculpture” design language has been translated very nicely onto the Elantra. It shares the same design language as the mid-sized Sonata, the subcompact Accent and the upcoming full-sized Azera. Compare these four models and you will find some striking similarities in every shape, fold and angle executed between these two sedans. The result is a compact that stands out amongst the usual suspects – a sharp looking and handsome vehicle designed for optimal efficiency.

The GLS sedan I sampled came with a set of handsome optional alloy rims and aggressive Continental tires. It just makes the Elantra a truly nice little number to admire – even from a distance. Perhaps the most stunning feature that caught everyone’s eye was the Indigo Blue Pearl finish that was lavished on this sedan. 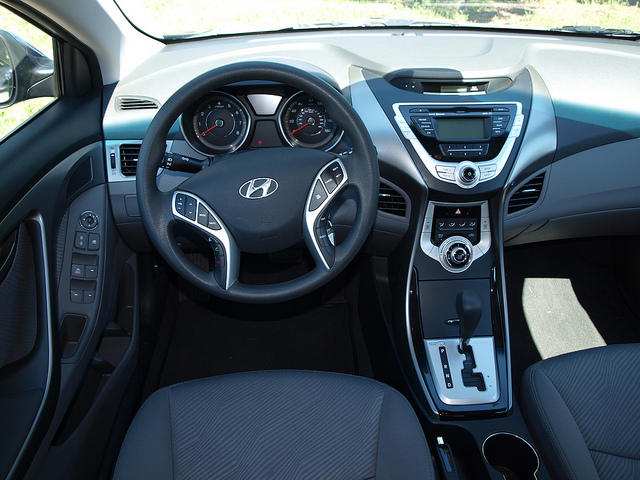 Inside, the Fluidic Sculpture theme continued with a sharp cockpit design that is now seen on the Hyundai’s other mainstream sedans – with a few twists. Instrumentation was easy to read and the controls were right where I needed them to be. I found the quality of materials and touch points a bit better than expected in the Elantra.

The Elantra’s seats felt more in tune with the driver. There’s superb legroom both front and back. Tall passengers will lose headroom with the new model’s angular coupe-like roofline compared to the last Elantra. Open up the wide lid of the trunk and you get a massive space to throw two week’s of clothes and goodies for a nice, long ride.

For entertainment, the GLS came with a standard six-speaker audio system. Along with AM, FM and XM radio, there is a CD player, Bluetooth connectivity, AUX and USB jacks for your MP3 player. However, if you own an iPod, Hyundai could sell you a specific adapter that plugs into both the AUX and USB ports for complete integration with the audio system. It is worth the $35.00. 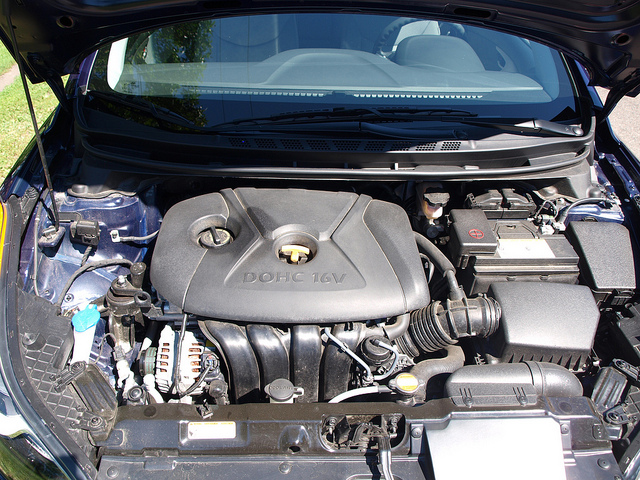 Under the hood is Hyundai’s 1.8litre DOHC 16-valve engine – a new engine for North American consumption just introduced in 2010. With 148 horsepower on tap, it can do the job quite well. A six-speed automatic was tacked onto the new motor. One issue I found when merging onto the highway, the engine would get “boomy” about 4,000RPM while in first gear. Then, it would take a long while for first gear to kick down. In all, I was let down by the gearbox on the Elantra, given how it was designed for optimal fuel economy in the first place.

My confidence in the Elantra was restored when I really felt the car at speed. The previous model was a nice car to drive overall as it simply got the job done competently. The new Elantra ratcheted everything up a notch. The ride maintained excellent solidity even on rough surfaces. It handled exceptionally well as it corners and tracks like a sports coupe. You can take this into a cloverleaf or a windy road without fear or resistance.

There was a strange mix of numbness and responsiveness in the steering. Perhaps it is because of the electric “motor-driven” steering system on the Elantra – something of the norm these days. However, put on the brakes and you’ll see why Hyundai did their homework on this car. The stopping action was sharp and sure.

The ultimate test for the Elantra was to see whether it was as efficient as its competition. These days, the mission for a new compact car is to yield 40MPG on the highway. Hyundai received that exact rating based on the Environmental Protection Agency’s fuel economy testing and promoted this figure as part of their advertising in its first year. Unfortunately, I was unable to reach that lofty number – not even close. With an overall test average of 30.7MPG, the Elantra proved to be a better daily commuter compared to other compacts out in the field.

The flip side to the entire fuel consumption picture is the small fuel tank that is on board. Yes, compacts are supposed to have small tanks, but I consider 12.8 gallons quite small for any sized car. 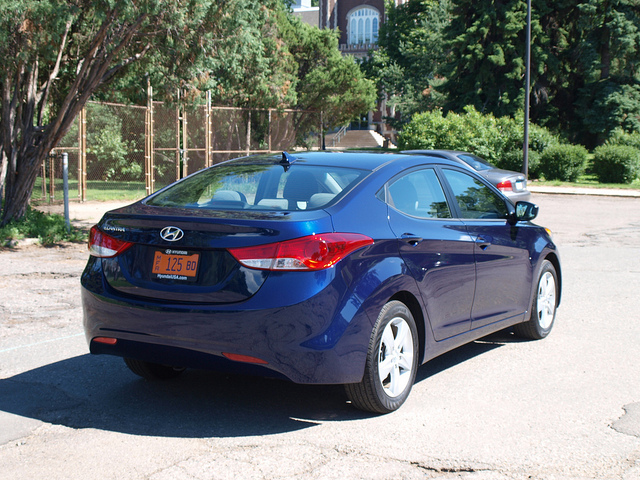 While the competition in the compact segment continues to grow, does the Elantra have any sort of advantage in the marketplace? For some, the sticker price of this GLS at $19,000 may seem a bit much for a car in its class. Think about it: You can get a Chevrolet Cruze LS with nearly the same level of equipment for $400 less. The only thing you will miss on the Cruze are a set of alloy rims. Or, you could buy the best-selling car in its class – the Toyota Corolla LE – for about $600 more with the same equipment level as the Elantra. Chose the Ford Focus SE, and you will end up at just over $20,000. That is just too much to pay for a compact sedan!

Despite some of its shortcomings, the Elantra is a strong choice in an increasingly competitive market segment. As a result, the Elantra had the best year-to-year sales improvement of all models within Hyundai.

The reality is that the new Elantra still retains a value advantage amongst its competition – if you count warranty coverage into the entire equation. However, you may end up with a better deal amongst the other players in the market – namely the Corolla, Cruze and the Focus. Add the upcoming Dodge Dart, and your choices will broaden a few steps further. I can certainly see this segment becoming as hot as the mid-size sedan one was in 2007.

If you are ready to downsize your life – at least your automobile – choose one that does not cramp your style. Choosing the Elantra would be a very good start.