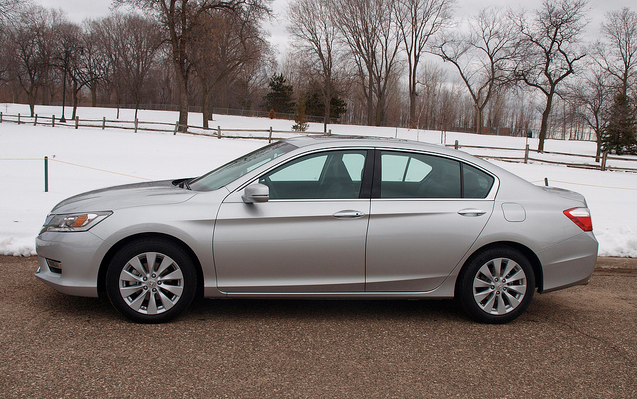 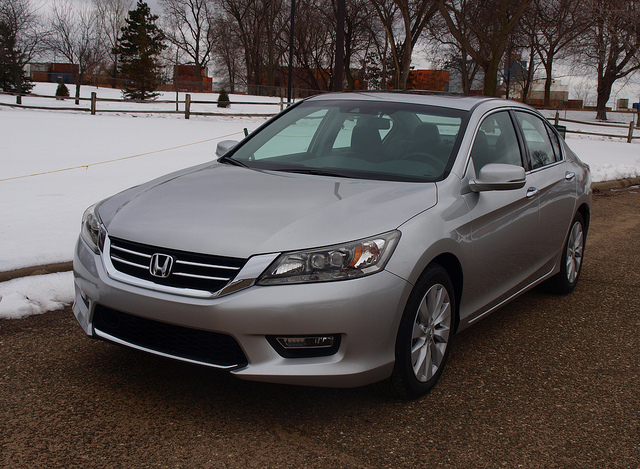 2013 Honda Accord Touring. All photos by Randy Stern

Why we do love the Honda Accord?

Perhaps I need to define “we.” If I meant the automotive media corps, “we” have not been too kind to the Accord. “We” demand too much from American Honda (and Honda Motor Co., Ltd.) to give us a car that was made “simple,” has high-revving V-TEC power and can do so many crazy things as any Honda with a Si badge did in its prime.

Take the moment when the first images of the latest generation of the Accord were released. The media corps questioned the idea of a smaller size with a larger interior concept and complained about how the Accord remained middle-of-the-road to the point of almost calling it “boring.” Though, admittedly, the reaction was milder than the one thrown at the current generation Civic.

That “we” does not count here. It is the larger “we” that matters – the rest of us.

“We” read what the automotive media corps had to say about the Accord and “we” really do not care. “We” rather flip from an automotive website or Facebook feed to sports, politics, food, entertainment, “Doctor Who,” pornography…to name a few diversions. “We” might care what some Kardashian has to say or wear that day, or when an NHL player could come out as gay, but “we” are just average human beings with perhaps something extraordinary that makes us individual and truly loved.

It is the larger “we” that is a reason why the Honda Accord has been one of the best selling cars in North America for the past three decades. In fact, it was the best selling passenger car

Back when Honda made things “simple,” the Accord lineup was straightforward. It began with a very practical hatchback coupe with a sedan added a few years later. You only had a couple of trim options – the LX being the top of the line. Over time, things got a bit sophisticated. This new generation of Accord still has the LX and EX models, and a leather upholstery option for the EX. However, they added three new offerings to make things even more sophisticated. The Plug-In Hybrid is one. A Sport model with the four-cylinder engine is another.

At the top of the range is what is considered the most luxurious Honda sedan ever created that does not wear the Acura calipers – the Accord Touring.

For the sake of retrospective, a V6-powered Accord Touring was given a proper rundown to find out the answer of the eternal question: Is this the best Accord yet?

Looking at the ninth generation Accord gives one the impression that, yes, it is. The progression leading to this model sums up the improvements made upon the design and the attention to detail in terms visual illusions adding to the overall look. It looks longer, but it is not. The roofline is quite rakish compared to the last few generations of Accords. The doors are the largest since the arrival of the four-door model in by the end of the 1970s. The chrome and LED lighting factor is heightened making this the most bespoke model in its history.

The details are done for one reason: Better airflow management. The front lower bumper features an air dam that is recessed and topped with a chrome bezel. The passenger side mirror offers up a lower blade to house a second rearward camera that doubles up as an airflow cheater. The Touring has seventeen-inch allows topped with Michelin Primacy MXM tires – all designed to ensure both aerodynamics and upmarket aspirations. 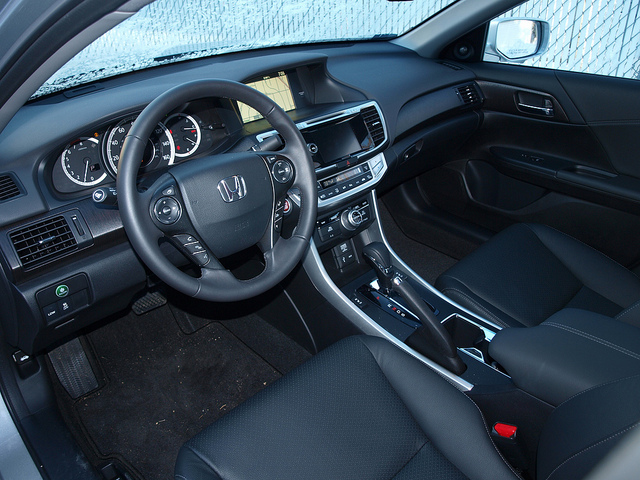 Taking the Accord slightly upmarket, Honda went to work on the Touring’s interior that feels less “tech-y” than any Acura, but offers up almost the same level of luxury. Perforated leather seating adds to the level of luxury in the Accord Touring, while offset by some interesting metallic black finishes in several areas around the console and center stack. Perhaps it is a way to avoid the popular piano black finish found on most vehicles these days. Instrumentation is huge with the speedometer and a switchable readout in the middle for all trip and vehicle customization functions right in the middle of the cluster.

Perhaps the most controversial feature on the Accord Touring is the integration of the i-MID screen along with a second screen below on the center stack. The i-MID screen is standard across the Accord line, featuring the backup camera screen, audio, phone and other vehicle settings functions. In most Accord models, the center part of the stack would have a huge knob and some large buttons to operate the i-MID. Selecting the Touring moves those controls below and replaces it with a touch screen for audio and phone functions only. While some object to having the second screen, there is a justification for it for the ease and speed of setting up your presets when you get the vehicle in the first place. Otherwise, it appears a bit redundant. We would expect that would show up on most Honda and Acura models over time, if not already.

Once the presets are fixed and the phone paired via the Bluetooth connection, you will be able to hear everything through 360-watts of power filtered through seven speakers throughout the cabin. There is a subwoofer on board, but adjusted correctly gives a balanced sound for every passenger. Aside from the usual AM/FM radio options, there is SiriusXM, a USB connection that reads normal MP3s, but is enhanced when higher iPods or a iPhone is connected. You could also add your favorite songs to a 16GB hard drive. Once you are set up with HondaLink, you could also use Aha’s smartphone-based content – including highlights from Facebook and Twitter.

Compared with previous generations, the Accord’s cabin is the roomiest of all. Rear seat space offers legroom for most adults, but headroom would be limited to anyone up to six-foot-two. Up front, average adults would find great bolstering and comfortable leather surfaces on the Touring’s seats. Taller folks may have to find the balance between a comfortable driving position and negotiating the headliner with the moonroof mechanism set above. There were times when I thought I was driving the Accord coupe and not the sedan – which could be a good thing. 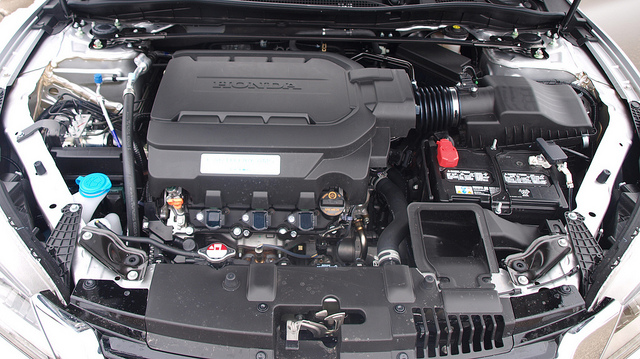 The reason for having a couple-like seating position is the 3.5liitre V6 underneath the Touring’s hood. With 278 horsepower on tap, the V6 is smooth and quiet at speed. Though it has the new Earth Dreams branding on the engine’s shroud, it feels more like the other designation for this engine – i-VTEC. A six-speed automatic filters the V6’s revs down to its front wheels.

The theme of “better than before” was evident in the Accord’s driving dynamics. The ride is much smoother, though some bumps and post-snow gaps on the road were felt in the cabin. One may lament the loss of double-wishbone suspension up front, but the MacPherson struts that replaced Honda’s signature in vehicle engineering did just a good job managing the 3,500 pound Accord Touring. Active Noise Cancellation helps in ensuring a near-serene driving experience, even cocooning us from tire noise.

The Accord was never afraid of curves and cloverleaf interchanges. Even with MacPherson struts instead of double wishbones up front, handling was fine with controlled lean and body roll. The Touring’s standard Michelins showed great grip and traction on every surface it rolled on. Steering action was very direct with variable weight on the feel. Turning effort was made easier by an electric power assist system that does a fine job recreating the steering action of Accords past. Brakes were to the point with the right balance of effort and pre-braking action in both normal and panic situations.

Elevating the Accord experience is a new set of active safety features that really work. There is an Adaptive Cruise Control that brakes when it senses being close to the vehicle in front of you. The second rearview camera is actually a blind spot monitor for when you indicate a right turn from the signal stalk. The Lane Departure Warning is an audible signal with a visual in the information screen in front of you. To top it all off, Forward Collision Warning is added, sensing greater danger in front you. You still have anti-lock brakes and traction control and Vehicle Stability Assist to manage the worse early spring snow, sleet and other fun stuff that Minnesota’s climate will throw at it.

Driving the V6-powered mid-sized family sedan through an extended winter could be a challenge at the gas pump. The Accord Touring turned a 23.5MPG fuel consumption average in mixed driving. Having the Eco Assist button on helped matters in terms of gaining the best fuel consumption ratings possible. 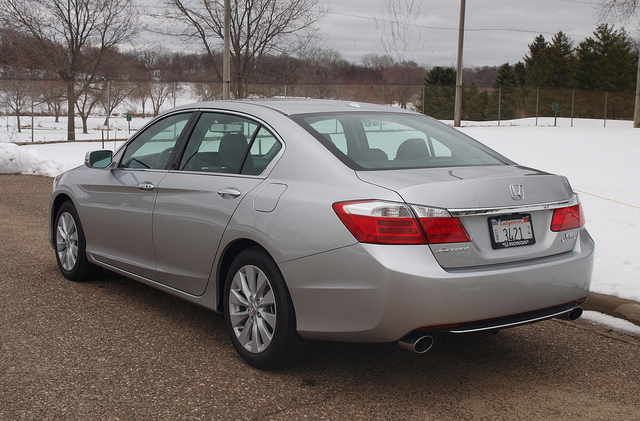 Price-wise, the entire Accord lineup starts at under $22,000 for an LX with a four-cylinder engine and a manual gearbox. Once you reach the Touring model, you have already spent another $12,000 just looking at it, bringing the final price to $34,220. Some may argue that you could as well settle for an EX-L V6 model for $1,360 less, if you could live without the adaptive cruise control and LED headlights. You also get more exterior colors, if you choose the EX-L V6 over the Touring.

To answer whether the ninth generation Accord is the best ever, one has to look back through the previous eight iterations. This is where the arguments begin. My favorite was the third generation model, with its pop-up headlights, signature Honda engineering and design tenets making it low slung and aggressive. I would also throw in the original Accord hatchback of late 1970s vintage with its innocence and excellent execution right out of the gate. It is no wonder why this car has been one of the best sellers over its lifespan.

While this generation might not exactly rank up with Accords of 25-35 years before, it is a major leap over the past few generations in terms of design, technology and execution. That alone makes the Accord worth putting on the shopping list in one of the most competitive market segments in this country.

One thing this generation of the Accord will do is to satisfy a large chunk of the larger “we.” My colleagues in the automotive media corps would offer different arguments, as would enthusiasts who know the difference between generations of Hondas. Still, the greater “we” are the ones that matter. “We” are in the dealerships, negotiating for the purchase, signing our lives away with the finance manager and flashing the keys to our friends, family and co-workers the next day.

The ninth generation Accord was made for that larger “we.”