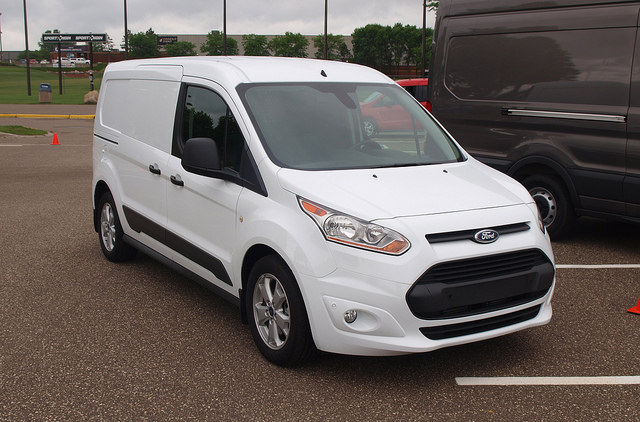 Here is something you may have never read in Lavender Magazine: Vans are sexy.

Well, they can be. That is, if you happen to be the right customer for one.

Let me explain: You have a business. You do not need to haul much – floral arrangements, catering for a wedding, DJ or band equipment or a local courier service. You also work inside of an urban enclave, where traffic and space are critical. Parking is limited and sometimes people only give you enough space to get around equal to half a smart fortwo.

There had been “panel vans” sold here before – mainly wagon versions of cars with the rear doors removed and a piece of metal where the side windows used to be. Minivans were also sold in “panel” versions – the Ram Cargo Van being the only one of these left on sale.

In 2011, Ford brought over a van that would change the marketplace for good. The folks at Dearborn usually like to shake things up – and they did. The original Transit Connect became the darlings of the commercial vehicle world with its small stature and low buy-in. The response was great. You saw Transit Connects at work with UPS, the Twin Cities’ Metro Transit, Xcel Energy and many other businesses large and small.

This year, a new Transit Connect was introduced. This was developed on a new platform with a new body and more Kinetic design features inside and out. Production has been switched to Ford’s Valencia, Spain line, instead of Turkey. The quality is up and the functionality is more car-like than before.

In addition, Ford is now pushing the Wagon more for consumers looking for an alternative to the minivan. The Wagon features three rows of seating for seven people, some cargo space for those who need it. Not only do you have a taxi worth tooling around the streets of your chosen city, you have a family friendly conveyance worth taking on the school run or to summer camp. 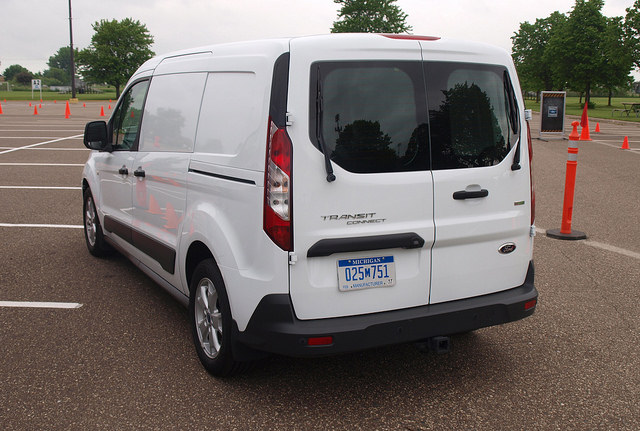 The Transit Connect I drove was the Van. You are probably wondering why I would try out a cargo van. It just happened to be there and I was curious. Besides, you could possibly be in the market for one. Follow me here and we will explore the Transit Connect Van together.

There are two wheelbases available for the new Transit Connect – 104.8 inches and 120.6 inches. Do not let the wheelbases fool you, as the body remains short due to its lack of overhang off of the rear wheel. The long wheelbase model is about as long as a Ford Fusion. The unibody construction lends to a front0drive configuration, though the rear is held up by a twist-bar with a stabilizer bar.

Capacities are up. The long wheelbase model has more than 130 cubic feet of cargo space. Maximum GWVR is 5280 pounds – that is the total weight of the vehicle, plus occupants and the maximum allowable cargo payload. In other words, the Transit Connect is more robust than ever, despite the addition of a longer model.

The version I drove was the XLT Van in the long wheelbase configuration with dual sliding side doors and dual rear doors. I was surprised how nimble the longer Transit Connect was through the closed course I drove it on. The turning radius was very good, despite its long wheelbase. Ride comfort and handling were also very good – there is actually no roll in the turns and quick maneuvers were done quite easily. Brakes stopped just fine within the controlled environment.

Under the hood of the XLT LWB Van sampler was the 1.6liter Ecoboost turbocharged four-cylinder engine. Connected to a six-speed automatic, the Ecoboost gives you 178 horsepower and 184 pound-feet of torque. The Ecoboost seems well-suited for the Transit Connect, providing good power while scampering across town with an urgent package on board. Keep in mind that the Ecoboost only drinks premium fuel, which may be deal breaker for businesses. A 2.5liter four-cylinder is the standard engine across the line, with only 169 horsepower on tap. This engine could also be set up to take Compressed Natural Gas or Liquid Propane Gas as its fuel source. 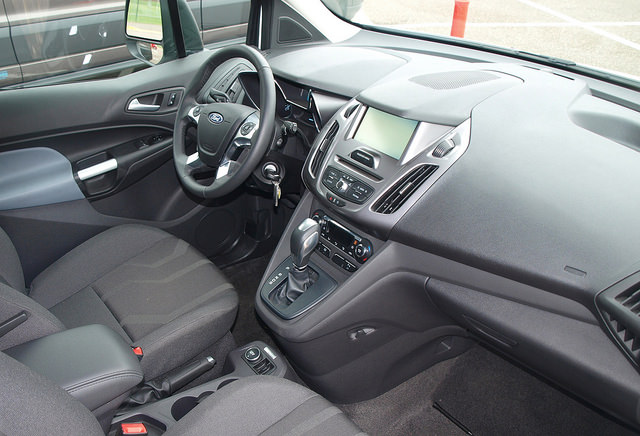 The cab is very comfortable and roomy for all drivers. The seats are just right for all drivers with enough adjustments to fit them all. Ford’s Kinetic design provided a familiar atmosphere for those coming out of a Fiesta or Focus into the Transit Connect. The switches and controls were familiar and felt as expected from a Ford. This version had the MyFord Touch with SYNC and a rearview camera – all designed to ensure safe operation of the Transit Connect. In particular, if a driver connects the phone via the MyFord Touch/SYNC Bluetooth, consider how productive one could be without having to touch the phone at all. Ford also offers Crew Chief, a service that is designed to monitor driver and vehicle metrics towards better and more productive operation.

Transit Connects start off at $22,995 for a basic XL short wheelbase van. A similar van to what was driven could be had for around $27,000 or more.

There are many reasons why one could go with a Ford Transit Connect for their business. The good news is that there are now choices to make to create the perfect van to suit your needs. This is probably why Ford has solidified their position in this new market segment. Besides, having a choice is sexy – if you are indeed the right customer.