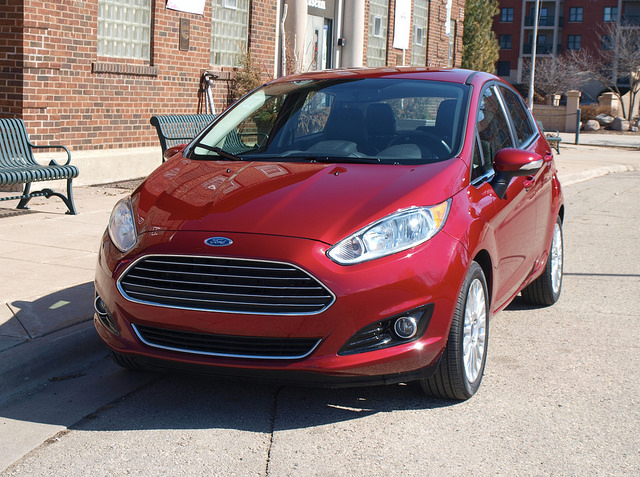 Remember the Ford Fiesta? Not the current model on sale right now, but the first one. No? Here is the story…

It was 1977. Lee Iacocca was still President of Ford. Things were going sideways at Dearborn thanks to a new product push that leaned toward efficiency while offering almost redundant products. The Torino and Elite were set aside by the LTD II and the “downsized” Thunderbird. The Maverick eventually was replaced by a new platform, the Fox. The first product off of that new chassis was the Fairmont. The Pinto, Mustang II, and the jumbo-sized LTD had seen better days.

Traditionally, Ford always sold a product from its European arm in North American showrooms. The Mark II Cortina ended sales to make way for the Capri coupe; however, that car ended up in Lincoln-Mercury dealerships instead. The Capri was soon supplanted by another idea that Iacocca signed off on—a subcompact hatchback. This time, that small car was sold at Ford showrooms.

The Fiesta was aimed at a growing European/Japanese contingent offering high fuel economy with hatchback space. The Honda Civic was growing in favor in this segment, while competing against the Volkswagen Rabbit, Renault Le Car, Mazda GLC, Datsun F10, and Toyota Starlet and Tercel. The Fiesta was also seen as competition against domestically produced models, such as the Dodge Omni, Plymouth Horizon, and Chevrolet Chevette.

Ford had a good argument against these hatchbacks, though the segment was not as clearly defined as it is today. Yet, buyers balked at the German-made Fiesta due to its lack of automatic transmission and relatively small size. Americans were not as ready to embrace subcompacts in 1978, as they do today. 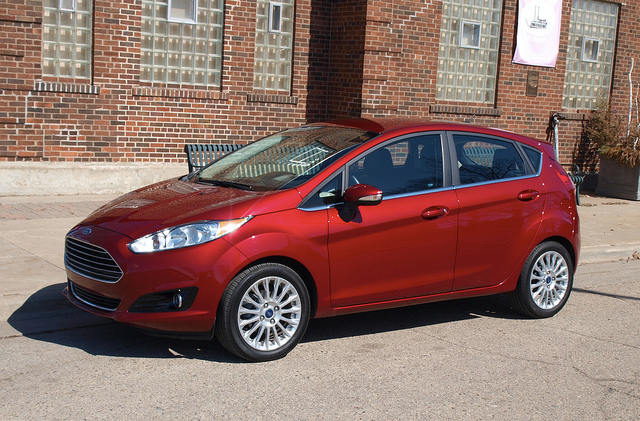 A strange thing happened a few decades later. Fuel prices skyrocketed. Many reasons were given, but a response by the entire automotive industry was needed. Ford saw how the Honda Fit and Toyota Yaris were defining the subcompact market. Dearborn also saw opportunity in the face of the competition, namely the Chevrolet Aveo and Kia Rio.

The answer came when Ford decided to reintroduce the Fiesta back in the North American market, every one sold here was built in Mexico. They trotted out the Kinetic designed body to mixed reaction. Still, the Fiesta held its own within the subcompact market here.

For 2014, the Fiesta took on some changes. A new front end denotes a second generation of the Kinetic design language. You could say the grille looks like an Aston Martin. This is the new fashion for Ford’s global products of late, a paean of its once-ownership of the British car marker. The rest remains familiar when it was re-introduced in 2010 as an early 2011 model, many angles forging a svelte hatchback profile and superb practicality.

The Titanium package adds a bit more flair to the flamboyant Fiesta. Sixteen-inch alloys with Hankook Optimo tires create an upscale feel for the diminutive Fiesta, as does a splash of chrome in the appropriate places. The Titanium badge on the hatch could be a bit subtler, however. 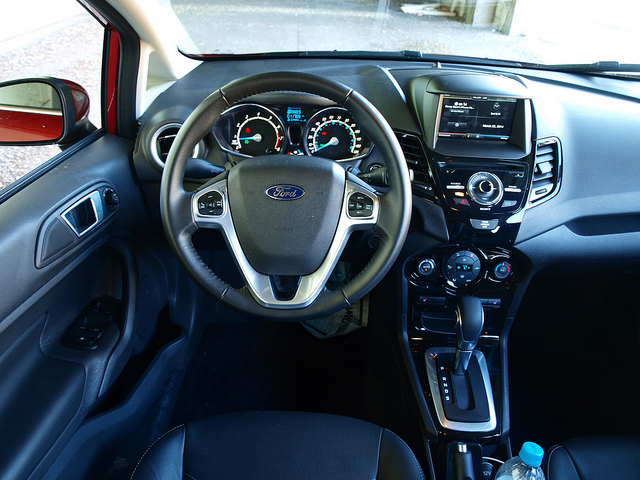 The Kinetic design remains intact inside of the Fiesta. The dials are readable, if not on the small side. Switchgear is pretty decent, but worth learning how to use. The center stack is crowned by a smaller version of MyFord Touch powered by SYNC. The screen is right for averaged-sized persons, but not tall ones, as it is positioned low on the cowl even to see the backup camera screen.

Normally, a Fiesta would present a series of buttons for the infotainment system on the center stack. Choose the Titanium, and you get the eight-speaker Sony system to add to your SYNC and MyFord Touch. With the Sony system, you get a center “knob” that is a toggle for volume and tuning, along with bar switches for other audio functions. Needless to say, the Sony setup creates a clean center stack for the Fiesta. Climate controls are set up in three circles with buttons inside of them. A simple temperature readout lives in the center circle.

Before you sit down on the Titanium’s seat, feel the upholstery. That is indeed leather; something you never thought would appear on a subcompact until recently. Though it is nice to the touch, the seats take some time getting used to. They are smaller than what you might expect, but wide enough for most people. Manual adjustments for rake, recline, height, and lumbar support will accommodate most drivers. Once it gets used to you, they are fine for long distances and around town.

It is a small cabin for four average sized adults. Rear seat room is a bit tight for most adults, depending on who is sitting up front. Cargo space is quite decent and expandable. With the rear seats up, you may get enough luggage in the back to take on a weekender for 2-3 people. 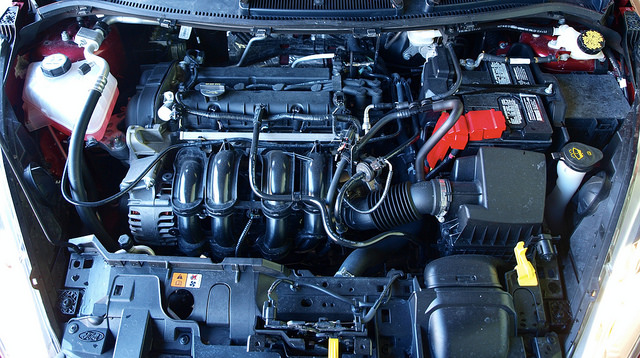 The talk of 2014 is the introduction of the ultralight 1.0liter EcoBoost turbocharged three-cylinder engine. This engine is only available on the SE model with a manual gearbox in North America. Our Titanium tester came with the 120-horsepower 1.6liter four-cylinder motor. The best way to describe this engine is “spunky.” It has enough power to take you anywhere from in town to out on the Interstate.

A six-speed PowerShift dual-clutch transmission connects the engine with the Fiesta’s front wheels. Expect quicker shifts overall, but be mindful of a long first gear on full throttle. Most times, it will hit the limiter and slam down to second gear on those occasions. More concerning is at cruise, when the transmission will keep the engine at higher revs on the highway. For example, if you cruise at 70MPH, the engine/transmission mix will not drop below 2,750RPM.

Ford has a reputation for good driving dynamics, especially in the ride department. The Fiesta is no exception. Though sprung softly, good tarmac gives the Fiesta a ride not unlike a Focus or Fusion. The Fiesta does its best to absorb road imperfections and shallow potholes, however it will bounce on worn highway surfaces—and not pleasantly. Expect plenty of roll and lean on the curves and cloverleafs, though the Fiesta tracks quite well on wet and slightly iced surfaces.

A small steering wheel makes good work on turns. The setup is well weighted with good action and response. On-center feel is spot on. Normal and panic stops reveal a decent braking system with drums in the rear. The anti-lock system grabs the Fiesta, but not gracefully. Pedal response is very good. 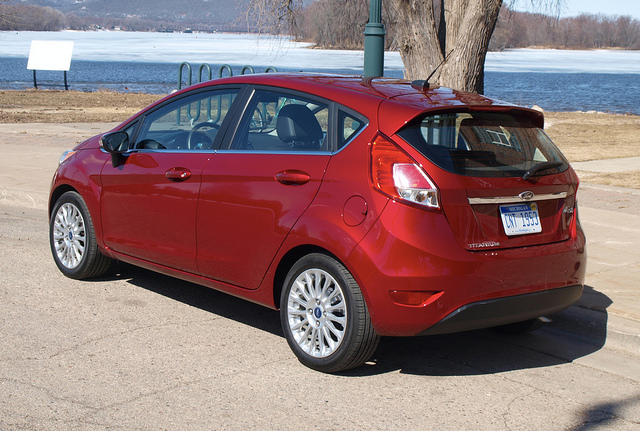 When looking at fuel economy, Ford claims a more realistic figure for the Fiesta with the 1.6liter engine and PowerShift dual-clutch gearbox. Our average was better than Ford’s average: 33.2MPG. That figure is more realistic for the class if you do a good mix of driving year round.

If you are considering the Fiesta, there are plenty of choices to consider. The S four-door sedan with a manual gearbox starts with a sticker price of $14,925. Chose the hatchback over the sedan, you add $500 to your bill. However, the Titanium hatchback tester as equipped was priced close to $22,000. If you choose the hot ST hatchback, expect to pony up at least $22,225.

It is true that the Fiesta is up against some competition. Its rivals offer something a bit more than the Fiesta, such as space utilization in the Honda Fit, upgraded interior quality in the Kia Rio and a lighter, more chuckable car in the Nissan Versa Note. What the Fiesta offers is solid Ford quality. That alone is worth the price of admission.

By choosing the Fiesta, you are connected back to when they were first sold as curiosities to meet consumer’s needs for more fuel-efficient vehicles in the late 1970s. This Fiesta is something you can drive without the curiosity factor. There are enough on the road these days to simply prove their worth.