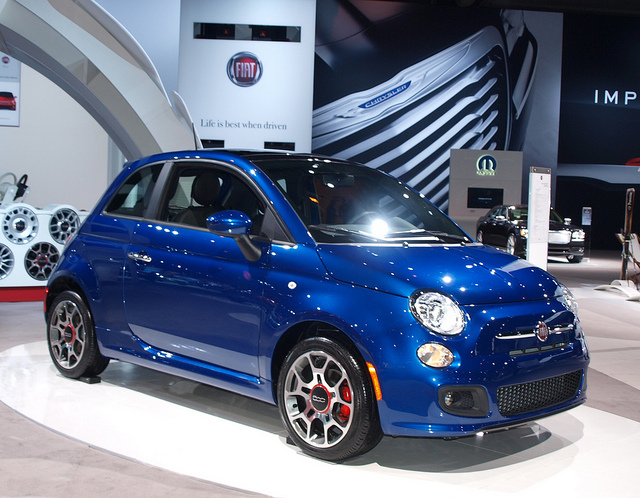 Once upon a time, Fiats were commonplace on American roads. They ranged from quirky minicars with two-cylinder motors to sporty models designed by the best Italian design houses. Their reputation wasn’t the best with mixed results on quality and reliability. Yet, these cars from Turin simply charmed you no matter which model you chose.

That was until 1983, when Fiat’s North American operations ceased to exist after decades of importing affordable European vehicles to this country. Even for a few years afterwards, you can still get the X1/9 mid-engined sports car and the Spider 2000. These two Fiat icons were instead sold under their respective design house brands, Bertone and Pininfarina. A few years later, these final rebranded Fiats simply disappeared from American showrooms.

By the mid-1990s, with Volkswagen left as Europe’s only mainstream brand on this continent, the consumer base yearned for another chance at some serious choices against the Japanese and Koreans. That is, until now.

Over the past year or so, I followed the progression of Fiat’s return to North America. At first, no one knew how much TARP funds and bankruptcy proceedings could play a major part in the return of the popular Italian automaker. At 53.5% ownership, Fiat has been integrating into Chrysler by fusing the best of both companies together. Still, the work continues as the latest revised Chrysler products are being integrated into the European lineup and other locales where Fiat (and Lancia) has a serious presence.

Yet, if there was one automobile that North America had been waiting for – it’s the Fiat 500. I’ve witnessed as much as I could from speculation to touching and feeling the real thing. 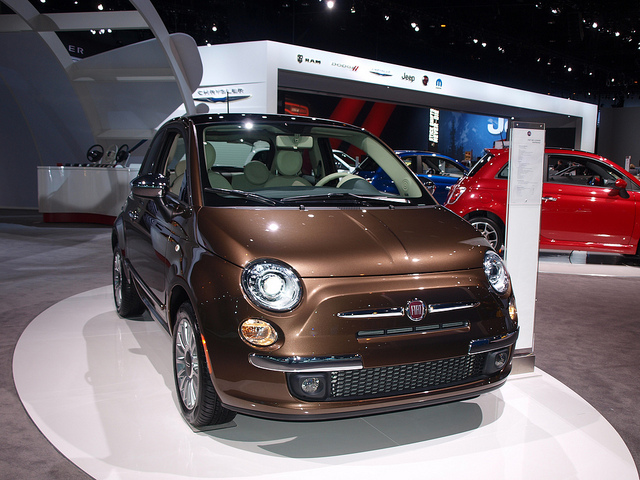 The ultimate proof is driving one. So, I did.

The first impression I had about the Cinquecento was the reality of scale. When I evaluate B segment vehicles, I need to make sure that they make an impression in a market that could be welcoming or cold. You could say “cheap and cheerful,” but that’s not what Fiat had in mind for the 500. There is a serious feel to the retro design and a look that is engaging and pleasing to the eye. If you must compare it to something – the MINI Cooper is the first car that comes to mind. While BMW’s British bulldog is squat and low in its presence, the 500 provides a taller, more amenable stance that fits right in many locales. I loved how it looked when it was introduced in Europe – I liked it better on the landscape of the Upper Midwest. 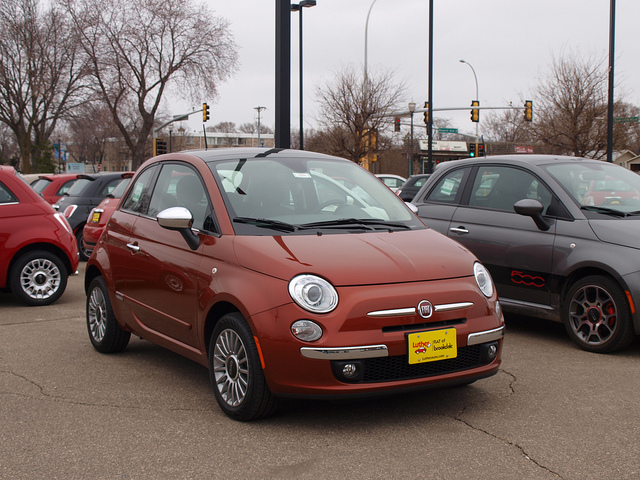 Inside, I was pleasantly pleased with the higher seating stance compared to the rest of B Segment. The Lounge hatchback model I drove had standard leather seats that were tastefully done. The drawback was I found the backrest to be pretty flat and lacking support. If you are looking for a glove to sit in, opt for the 500 Sport and its aggressive front seats. 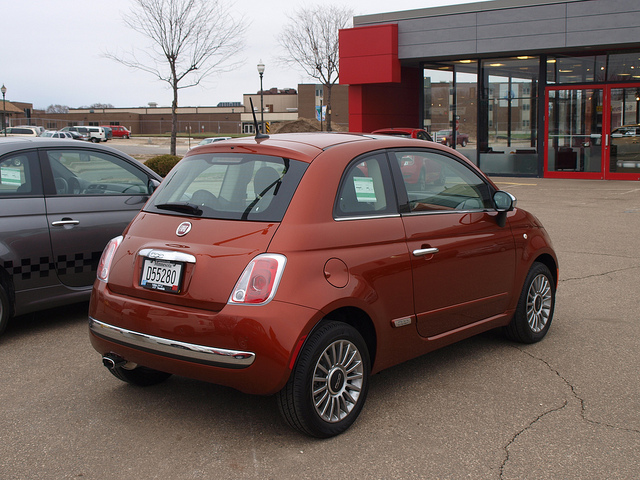 The Lounge model comes well equipped, ranging from Sirius satellite radio, Blue-and-Me Bluetooth connectivity, the eco:Drive consumption monitoring program, a USB port for your iPod along with power windows and locks. The latter feature has an interesting action to it. If you tap the door latch away from you – the doors will lock. A very brilliant piece of ingenuity, I must say! 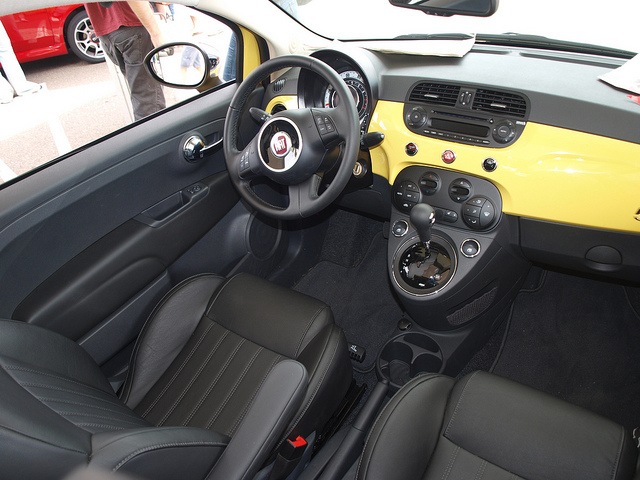 The single circular instrumentation pod can be confusing at first. Making up the pod, the speedometer is on the outside, the tachometer on the second layer and a digital screen in the middle. You will appreciate the middle screen as it gives you everything you need to monitor your Cinquecento – from fuel and temperature gauges to information screens showing you your radio station and song to your fuel economy data.

Under the hood is Fiat’s own MultiAir 1.4litre four-banger. Translation: It’s Fiat’s best engine and the company’s calling card. The MultiAir goes about its business in a nice, relaxed manner to propel the 500 across the interstate system. My example was connected to a six-speed automatic gearbox that made easy work of both city and freeway conditions – something you don’t often get in the B Segment.

There are a few more surprises about the 500. You get a completely solid ride and taut handling to manage any conditions you throw the Fiat into. It steers quite well and can be pretty loose in higher speed situations. To rectify this problem, you push in the Sport button right between the audio system and the climate control switches. Once you do, you will notice the difference in gearbox and engine response along with a tighter steering feel. Sure, you lose fuel consumption, but it’s worth it on days when that opening in the left lane beckons during a typical rush hour in your town. Don’t forget about stopping – the 500 does that extremely well, too! The brakes appear to be as strong as the MINI’s, which means they’re miles better than the rest of the segment. 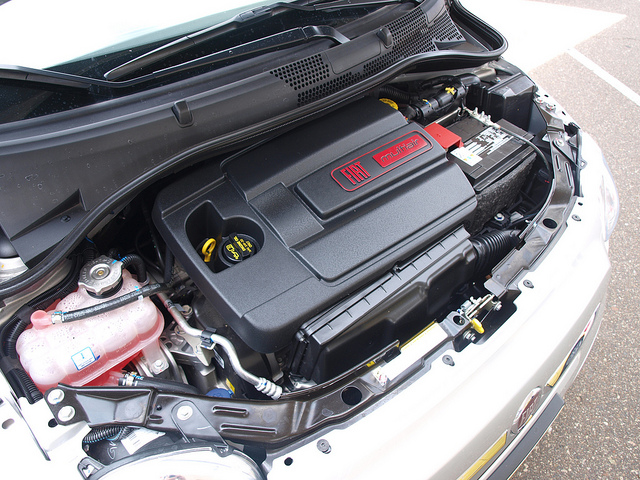 Normally on reviews such as these, actual fuel economy is measured. Unfortunately, I was not able to get a reading due to the brief time behind the wheel. EPA fuel economy ratings, however, are 27MPG in the city, 34MPG on the highway with the automatic. Manual gearbox models are estimated to get up to 38MPG on the highway.

The price of admission may surprise you. The Lounge is the top hatchback model, with my example priced at $21,500. You can get the less expensive Pop starting at $16,000, if you are looking for high Italian style at an affordable price. My pick is the Sport – with some essential equipment and the 6-speed automatic gearbox, I could do this for under $20,000.

This brief drive in the new 500 provided some insight as to Fiat’s chances upon returning to the North American marketplace. The idea of selling a single model at a dealership is a risky venture. There had been successes – Hyundai 25 years ago with the Excel – and failures – Yugo and, to a lesser extent, smart. However, sales are picking up for the 500. In August, they sold three units short of the entire month’s sales of the entire MINI brand. 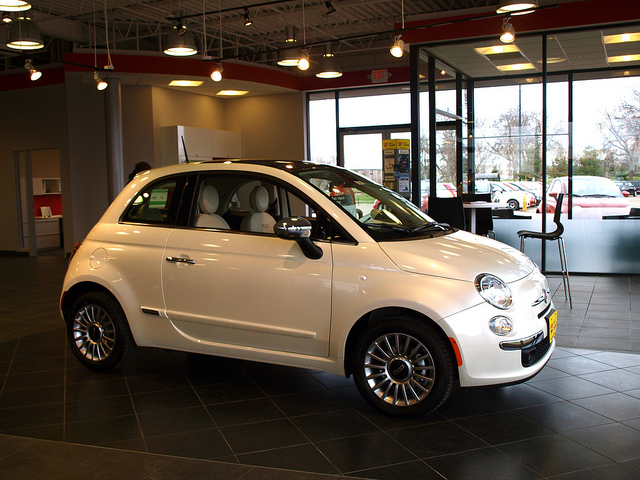 The hatchback is not the only model Fiat is selling here. The 500C convertible is already are turning heads and luring new customers to Fiat’s “studios.” In the pipeline are the special Gucci edition of the 500, an all-electric version and the ultimate enthusiast’s Cinquecento – the Abarth. Expect these new models within the next twelve months.

If one drive in a Fiat 500 is any indicator, they are very serious ensuring this return to our market is a very long one. Will that convince you to put the 500 on your shopping list? If the 53.5% ownership of Chrysler, the production of the MultiAir motor in Michigan along with the final assembly of the 500 in Mexico on the old PT Cruiser line doesn’t convince you – driving one will. Today’s Cinquecento is a far cry from the 850s, Stradas and 128s of the past.

The wait is over. Fiat is back on our roads. It’s worth a look…and a good drive. 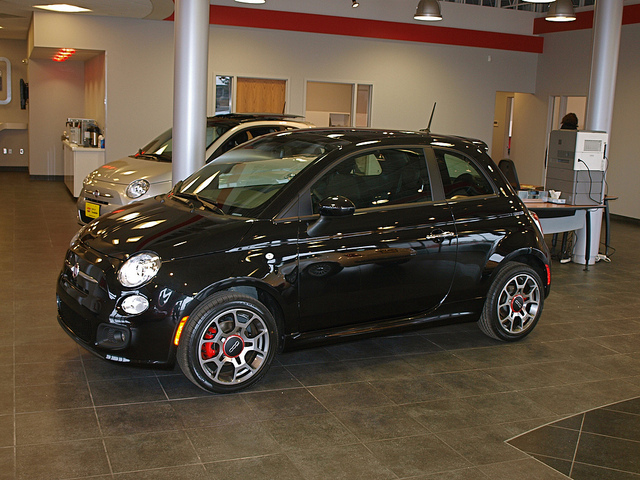 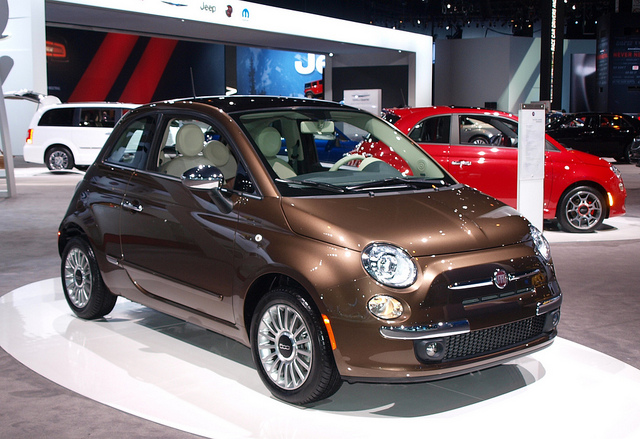 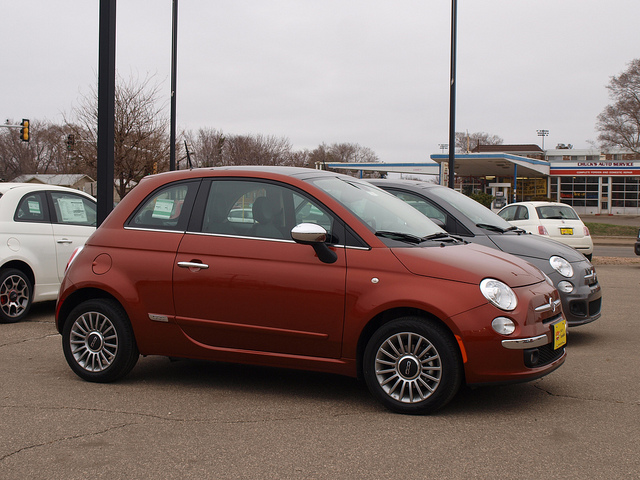 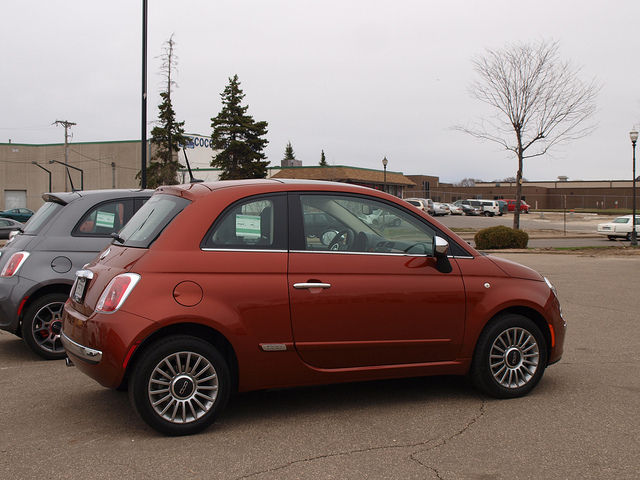