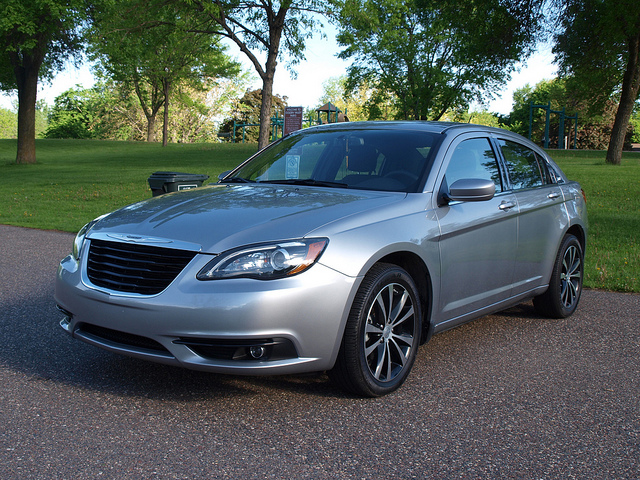 When something comes along that represents good value, you purchase it – right?

Consider what is a good value these days. The basic idea is to get more for your money. In the automotive business, that means putting on more equipment at a competitive price. It all comes down to a package that suits the average consumer’s needs with enough incentives toward eventual ownership.

However, being a good value alone is not enough. It has to be attractive to the consumer. It has to be comfortable and easy to operate. It has to have a story behind it.

In this case, there is a story for the consumer. If you recall a three Super Bowls ago, the Chrysler 200 took center stage as part of the new Chrysler brand marketing strategy – one that focused on the brand’s roots and the air of luxury it exudes. Add Eminem and a choir to the mix, and the winged badge was set to fly. The result was an amazing turnaround for Chrysler’s mid-sized product. What was once the Sebring – a product that some would use in a derogatory manner these days – transformed into an affordable, but premium family transport both seen at the rental car counter and in as many driveways across the country. Both volume and retail sales of the 200 have been the story of a car once maligned, now given a new lease on life.

But, is today’s Chrysler 200 enough to engage every day consumers?

One thing must be made clear here: The 200’s history was already checkered before Eminem rolled one up to the Fox Theater in Detroit. It began life as the Sebring with hopes of continuing the success of Chrysler’s mid-sized lines from the 1990s. The Crossfire-inspired styling was a bit over the top and consumers found many faults with the Sebring. To reverse the tide, Chrysler went to work on upgrading the Sebring into the 200 by raising interior quality, cleaning up the design and improving driving dynamics.

The exterior is now more distinctive, with its winged badge, distinctive chrome grille texture, reconfigured rear deck, and a better choice of wheels. The front lights are fantastic, with a running LED strip on each side and projector lenses. Chrysler did leave the roof-line alone, but gussied it up with distinctive touches.

On this Touring model, something else was added to the mix. If you look at the back of the car, you will see an S badge. You may have heard that Chrysler has been adding a bit of sport to their model mix replete with blacked out grills, embroidered leather seating, larger wheels and the winged badge insert turning from Chrysler Blue to black. The 200 S has proved popular for enthusiasts – in both sedan and convertible models.

However, this S is not the real deal. On the Touring model, you can tick off an appearance package that looks like an S. It actually fooled plenty of people to know that this S is not the hopped up 200 everyone is talking about. Still, it looks pretty darn good – for a 200 Touring.

There are some dead giveaways for it being just an exterior package. Inside is the basic black Touring interior in cloth and with specific S instrument dial set. The biggest improvement from the Sebring to the 200 is right in front of the driver – with better materials and instrumentation. One complaint everyone had with the Sebring was the sight lines for all of the instrumentation That problem is resolved with better steering wheel diameter, thickness and positioning. It also helped to ensure that you can see the gas gauge easier toward the center dial.

The center stack is dramatic, starting with the white-faced and chrome Chrysler analog clock, leading down to the touch screen audio system and climate control knobs. The shifter has a better feel, as does almost every surface of the cabin. Though it did not come with navigation or a rear-view camera, you still get USB device connectivity and Bluetooth connection for your phone – all through UConnect. SiriusXM is available along with a 40GB hard drive to load your favorite songs and albums onto – all piped through six speakers throughout the cabin.

Seat comfort is not bad. You get manual lumbar adjustment along with power seat controls. The bolstering is minimal, but the seats do put you in place once it gets to know you. Room up front is good, and overall rear seat room is about right for an average-sized adult. 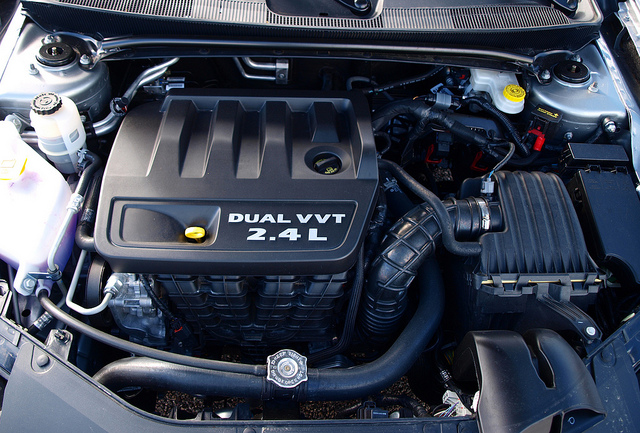 The other dead giveaway that it is not a “true” S is under the hood. Chrysler offers the 2.4litre four-cylinder World Engine under this model’s hood. This tried-and-true motor sends 173 horses to its front wheels though a six-speed automatic transmission. It does a good job keeping up with traffic and getting around town. You will feel some loss in power on passing and some uphill grades. Still, this engine is not a bad choice, though some of my Mopar friends would persuade you to upgrade to the 3.6litre Pentastar V6. That is truly the engine to get in the 200 with 283 horsepower, the same six-speed automatic gearbox and all of the power right from your right foot.

Even with the four-cylinder engine, the 200 is actually quite fun to drive. The ride is very smooth and road imperfections were absorbed without shock into the cabin. Through the curves, the 200 is poised, neither soft nor firm. You can feel a bit of lean and roll, but not enough to cause concern. You can thank that to some suspension re-engineering for the 2013 model year. Steering was competent with enough feedback from the road, but a tad less sharp on tight turns. Brakes were very good with great reaction on normal and panic stops. In all, the 200 was great fun to trek between car events and the day job.

The surprise in the 200 with the four-cylinder was in fuel economy. The average consumption rating was 24.4MPG, lower than its direct rivals. You could achieve higher numbers on long stretches of highway – the highest reading was 30.2MPG.

Is the story of the Chrysler 200 enough to own one? Good question. It is not the perfect mid-sized sedan, but it is a fun car to drive. It is no longer the bane of rental fleets, but something we can actually buy without embarrassment. The S package sweetens the deal by creating something sporty to roll in, even if you did not tick off all of the boxes for a full-on version of one.

Even if you did pony up for the full S package, the price for one is pretty good compared to other loaded mid-sized models in the marketplace. That is what a good value is truly all about!