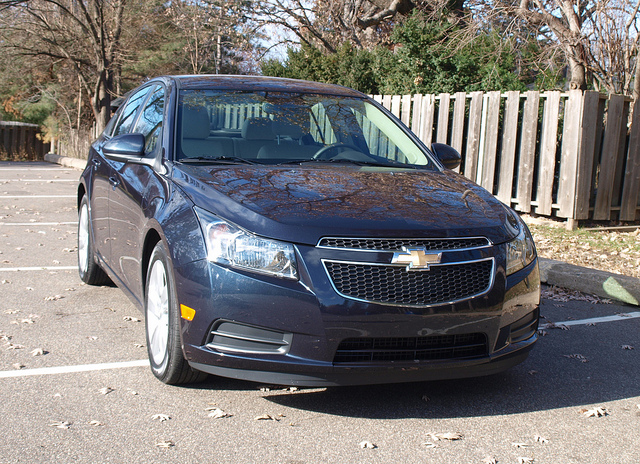 There’s nothing more fragile than the price of crude oil.

As former mid-sized owners move downward to compact cars, the Chevrolet Cruze has been amongst the top choices in its class. There are plenty of reasons for this – saving money at the pump is the biggest one. This had been the motivation for buying a Cruze since the since it was introduced in North America for the 2011 model year. Since then, the Cruze has been the best selling passenger car amongst General Motors’ offerings.

However, GM decided to add another reason to get a Cruze for 2014 – a turbocharged diesel engine option. It was a move that had more than a few pundits applauding – since there is a need to balance diesel offerings with hybrid ones to placate the upcoming fuel economy standards change in the near future.

It is one thing to look at a photograph of the Cruze. Seeing one live, you get the sense that GM achieved the right look for this sedan. There are some things that may jar you – the grille, for example, and how imbalanced the “Chevy bar” is to the rest of the front end – but it all comes together very nicely.

There were criticisms of the rear end’s design as being simply plain. Actually, it is more handsome than the tails on several compact sedans in the market. Some shapes draw you in – the rear lamps, for example – signifying the Cruze’s global approach to its overall design. 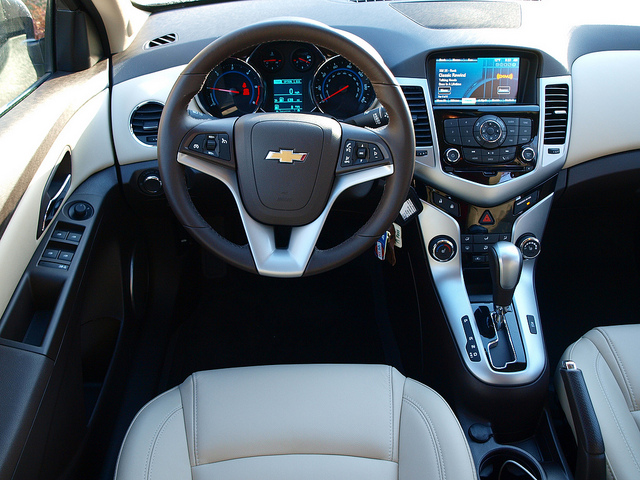 Inside is typical global GM: Circular instrumentation, wide center stack with buttons galore and slide down gear lever. The Cruze puts it all together with ease, as the functions are good to the touch.

In the center stack resides MyLink, Chevrolet’s infotainment system. You get the requisite SiriusXM and Bluetooth connectivity with navigation that is also linked with OnStar. The reversing camera also helps on days when the defroster is working hard to clear the ice out back. Sound came from a set of Pioneer speakers that provided a very nice tone overall.

The seats were covered with leather that was both hard and soft to the touch. The seats were firm and supportive for both boring commutes and spirited driving. You get power rake and height adjustment for the cushion, recline is manually adjusted and there is no lumbar cushion adjustment available on this tester. Rear legroom is quite limited to average adults and children. Trunk space is quite generous to handle everything from road trips to grocery runs. 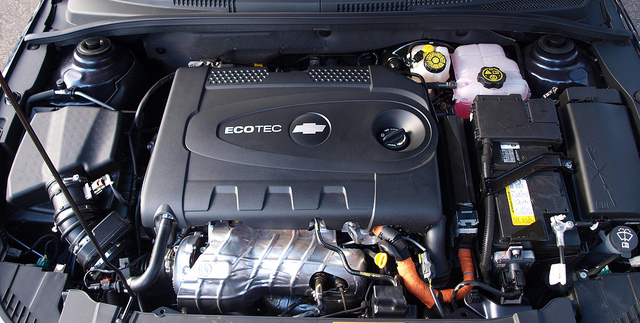 The 2.0liter turbocharged four-cylinder diesel engine is the last piece of GM’s former partnership with Fiat. There is 151 horsepower on tap with a 264 pound-feet of torque. It will surprise you how quiet the diesel runs, though you do get some of the requisite clatter at idle. Yet, there is no vibration. None of the stereotypical diesel experience from the past is evident with the Cruze at all.

Even more so is the performance of the diesel – it simply gets going. Throttle response is good and there is minimal turbo lag evident. Once you get the diesel running, it loves to gobble up the miles while emitting cleaner exhaust emissions and sipping less fuel.

A six-speed automatic gearbox is connected to the turbodiesel, driving the front wheels. It is the only transmission choice for this oil burner. If you wish not to fuel up with diesel, the Cruze is also offered with a 1.8liter ECOTEC four-cylinder and a 1.4liter ECOTEC turbocharged four-cylinder. Manual gearbox drivers will be able to row their own gears with these gas-fueled engines – along with the choice of the same automatic transmission offered on the diesel.

The Cruze is a straightforward, solid driver. It rode well as it absorbed every imperfection on the road. In fact, the Cruze has one of the best ride setups in its class. It handled pretty well, with some roll and lean in the corners. The Cruze steered rather decently and has excellent on-center feel. Brakes were fine for both normal and panic stops. In all, the Cruze was simply drama-free to drive.

Having a reputation for being a driver’s compact sedan, there is a price to pay for all this fun and frolic: Fuel consumption. When you have a diesel, there is an expectation of high fuel mileage. The turbocharged diesel turned in an average of 35.7MPG. In comparison, a Cruze LTZ with the RS package was driven on a separate occasion with the 1.4liter turbocharged ECOTEC engine and a six-speed automatic. That model turned in an average fuel consumption rating of 24.8MPG. 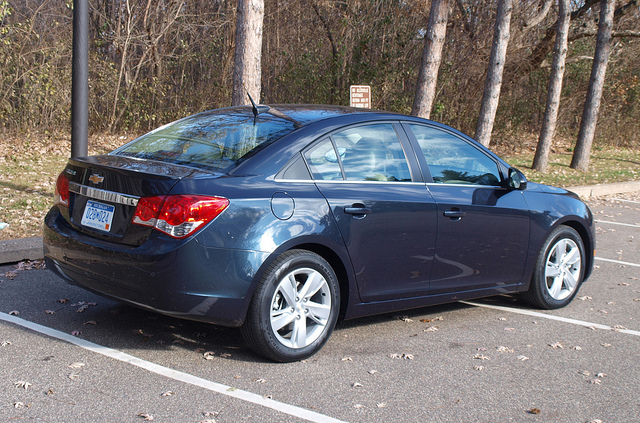 The Cruze lineup starts at $18,095 for a LS model with the 1.8liter engine and the manual gearbox. This fully equipped diesel tester came out to $28,105 – the most one would probably pay for a Cruze. If a diesel is not your choice for being efficient, Chevrolet still offers the Cruze Eco with the 1.4liter turbocharged engine, a manual gearbox and enhancements towards achieving a possible 40MPG for over $5,000 less.

As a compact sedan, the Cruze exhibited many positive attributes supporting the recent headlines on its success. It simply feels successful. With a few years in the marketplace under its belt, the Cruze is becoming a true leader amongst passenger cars here and abroad in its class. After all, the Cruze is not just for us – it sells quite well in places, such as Central Asia, Eastern Europe, Russia and Australia. The latter is sold as a Holden.

With the addition of the diesel model in North America, the Cruze already delivered on a huge promise to GM and Chevrolet. It can sell a product worthy of global audiences right here at home. No matter the price of crude oil – and your choice of actual fuel – the Cruze actually makes sense in today’s world.