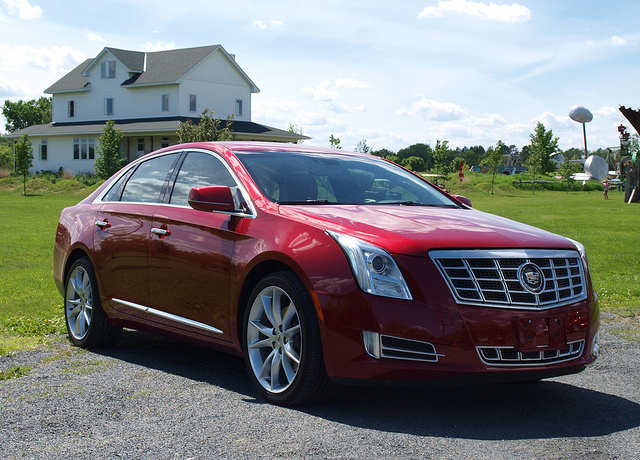 A long time ago, riding around in a big Cadillac was a huge deal.

A Cadillac would be your calling card that reminded everyone that you made it in life. These big, bold and beautiful machines made an audacious statement of your arrival – and departure. Tail fins, larger than life grilles and acres of chrome were all you need to show off your status to the world for all to see.

Even when Cadillac experimented with smaller vehicles, different design languages, roadsters, SUVs and crossovers, the symbol of the brand was always the “Big Caddy.” It may have switched the drive axle back and forth or have been tweaked with modern interpretations of classic brand design elements; there would always be a “Big Caddy” in the showroom.

The names of the “Big Caddy” evoked a response when they are called: Sixty Special, Fleetwood Brougham, Sedan de Ville, DTS…DTS? Perhaps Escalade would work here.

Still, a three-letter nomenclature yields no response from those pining for a piece of tailfin legend. Art&Science – the brand’s current design language – is the key to today’s Cadillac in an effort to become a truly global luxury brand.

What if there was a Cadillac that was thoroughly modern with the feel of a “Big Caddy?” What if a Cadillac could evoke the past, but laden with the latest of today’s technology and performance?

The Cadillac XTS could be the “Big Caddy” we have been waiting for.

The XTS answers to 110 years of tradition of advanced technology, design excellence and absolute luxury. That is splendid, but is it truly in line with the tradition of the “Big Caddy?”

For starters – it looks the part. The XTS is a combination of Cadillac tradition and the current design language. The last “Big Caddy,” the DTS, was reshaped with the angular version of the Art&Science design language, though it simply looked contrived. Cadillac approached the XTS with the idea to re-sculpture the Art&Science formula towards softening the lines, but ensuring its edginess that denotes brand familiarity. The result is a distinct sedan exuding confidence and strength that is organic and fluid.

It starts with the big grille, in particular the blacked out inserts on the Premium Collection tested here. If you Rolodex through Cadillac’s history, several model years of grilles would trace their roots towards the XTS. Heritage is found in the most modern details – the upright headlamp cluster, the finned tail lamps, the V-shaped third brake light, and various creases and lines throughout the exterior. The roofline is almost fastback-like, perhaps the most non-heritage piece of the XTS. Add the twenty-inch alloy wheels and Bridgestone Potenza tires, and you can see where the modern side of the XTS compliments its traditional elements. The sum of all parts equals the finest looking “Big Caddy” in decades. 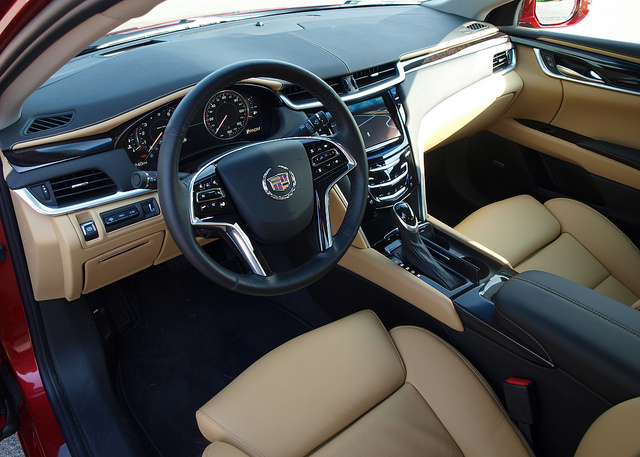 The melding of the traditional and modern continues inside. If I try to recall every mainline Cadillac interior over the past five or so decades, there would be some form of evolution to what is presented inside the XTS. In this case, modern has finally won over tradition, but you could see there are distinct “zones” in the instrument panel that could be traced back to the mid-1960s.

The big steps towards modernity are the use of TFT screens and the Cadillac User Experience – CUE. In the XTS Premium Collection, you could change the look of the entire instrument binnacle thanks to TFT screen technology. You could have a simplified screen with a digital speedometer, a graphic fuel gauge and a redundant audio readout. You could also opt for two other screens showing a tachometer, traditional speedometer, fuel and temperature gauges. Within each instrument, you could change the secondary screens or change out information to be viewed. This tester also had a heads-up display that is also customizable. In all, you can create your own instrumentation set up between the main binnacle screen and the heads-up display.

The CUE system had a software upgrade recently to make it even better to work with. Without touching the CUE screen, controls would appear and operate from a light touch. Below the CUE screen are touch sensitive controls for audio and climate control. In all, you have the entire infotainment suite, the navigation system and climate settings available without having to actually press anything. Real voice recognition and OnStar interfacing also add to the CUE operational experience.

Once you master CUE, you get to experience the end result through 14 Bose speakers placed strategically throughout the cabin. The Studio Surround system has a feature where if you set the sound to go to a Centerpoint, everything will come to the center of the cabin and envelop every corner of it. This setting is made possible by a pair of speakers mounted on the top of each seatback, flanking the headrest. With CUE, you get SiriusXM satellite radio, HD Radio, USB connectivity for mobile devices, Bluetooth phone connectivity and music file streaming.

In the past, you sat in a very comfortable bench-like seat. You had all of the cushion in the world without any support for your body. The XTS has changed this standard feature that made the “Big Caddy” what is was. The seats in the Premium Collection offer a taut, bit compliant seat up front with enough bolstering to lock you in through the bends, as well as on smooth straight stretches of tarmac. Rear seat room is very good for six-footers and could sit three-across for average-sized adults.

Another break from the past is its interior color scheme. It is no longer just all-red, all-blue or all-gray as in the good ol’ days of the “Big Caddy.” In this Premium Collection model, the leather came in a light Caramel with Jet Black contrasts in the instrument panel, the door panels and the carpets. You might say two-tone interiors have returned in favor – just like in the 1950s. But, this is a truly modern touch – something more akin to European cabins than American ones.

There is another feature in the driver’s seat you may want to get accustomed to. In this tester, a Driver Assist Package was added that includes lane departure warning, parking assist, blind spot monitoring, forward collision mitigation and adaptive cruise control. If the parking sensor detects you being close to something behind you or if you happen to drift outside your lane, you will feel it in the seat cushion. A beep could be annoying and we sometimes ignore it – or get mad at it. But, you cannot ignore that feeling from your seat cushion. 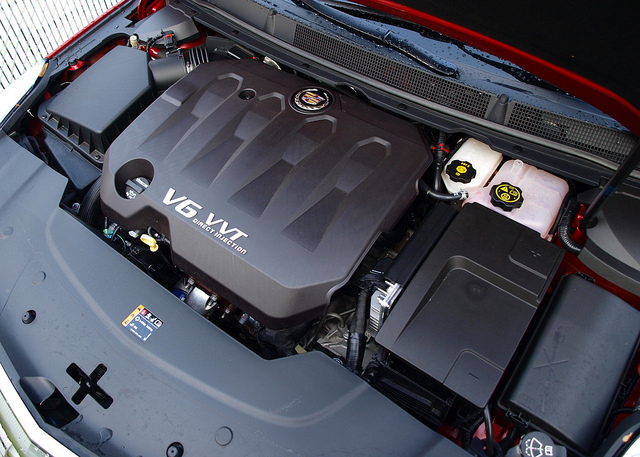 You will also get used to another feeling that is actually right in front of you. How about 304 horsepower on tap from your right foot? Under the hood is the very familiar and potent 3.6litre V6 found in most of the Crest-and-Wreath lineup. Normally, an engine of eight or more cylinders would power the “Big Caddy.” In the 1930s, Cadillac offered a sixteen-cylinder engine for its top shelf models. Since we are in 2013, this is the first V6-powered “Big Caddy” since the mid-1980s.

The V6’s power is channeled through a smooth shifting six-speed automatic that is fed to all four wheels. The all-wheel drive system on the XTS features torque vectoring to balance the load when grip is lost at one or more of the wheels. The system includes a limited-slip differential – certainly not the stuff of the “Big Caddy” from even a couple of decades ago.

Performance is great once you get up to speed. Getting there may not evoke the smoothness of Cadillacs past, however. The driveline is fine, but a few more torques would help matters to emulate the power of the “Big Caddy.” Then again, this is a thoroughly modern Cadillac in an age where working the rev line is more important than simply cruising to the speed limit.

In the past, you drove a “Big Caddy” to waft about on the boulevard or across country. However in the XTS, floating on the highway is no longer acceptable. This is first “Big Caddy” that is truly driver-oriented. You would never float along in the XTS, as the ride is tuned for a more solid and sure ride. There is some lean and dip through the curves and banks, but not enough to cause concern. The XTS is well behaved and controlled through anything you throw at it.

For the most part, the XTS is a quiet drive. On occasion when road surfaces are at its worse, couple that with cracks and gaps from old patch jobs, you will hear the twenty-inch Bridgestone Potenzas working overtime through the cabin. The same cracks and gaps from those old patches of road could be felt in the cabin. Otherwise, bumps and imperfections on newer pieces of tarmac are well controlled by a solid suspension set on the XTS.

Steering response and effort is good, but there is some softness in the middle sometimes. It does gather up nicely when needed – including sharp turns. Braking in the XTS is also very good in both normal and panic situations. The difference is the use of Brembo brakes on this Premium Collection example. Imagine your old “Big Caddy” with a set of Brembos all around…

Because it is a “Big Caddy” does not mean it will return an embarrassing fuel consumption average. Based on the sticker, this XTS should average 20.0MPG. The actual average for this tester was 22.0MPG. It is worth nothing that the XTS has a capless fuel filler port – a possible first for Cadillac and GM. 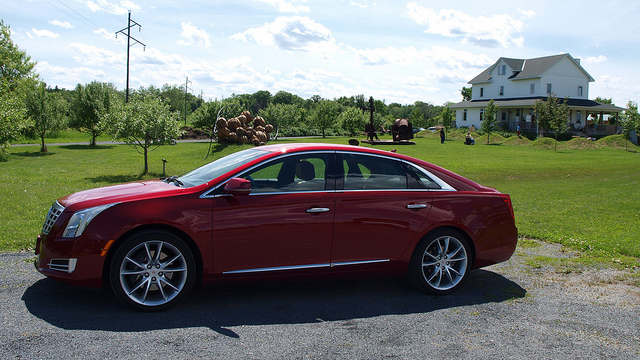 If the XTS is in effect the new “Big Caddy,” then it would be priced accordingly. In the past, DeVilles and DTS models always had a good starting price point that would be even less than the imported mid-sized luxury sedans. The starting price for the XTS is around $45,000 for a standard front-drive model. To get to this Premium Collection tester with the Driver Assist package and a couple other goodies, the tab ran to $60,620. Some smaller premium/luxury cars reviewed on here ran around the same price range. The XTS could be a good value in the end.

Throughout the decades, the “Big Caddy” had resonance. Its image had changed over time, but no one can deny the presence of one. It is a moment that would stop anyone in its tracks. Yet, that feeling was lost when it went to a front-drive platform in the mid-1980s. It took another few decades to regain it, but it took a leap into another set of competencies to accomplish it.

That it is the best way to describe the Cadillac XTS. It honors its place as the “Big Caddy,” but it does so by being more driver-oriented while melding both traditional and modern elements all around. The XTS will still turn heads, elicit smiles and spark conversations – just like the Series 62s, Sixty Specials, DeVilles, Fleetwoods and DTS’s of the past.