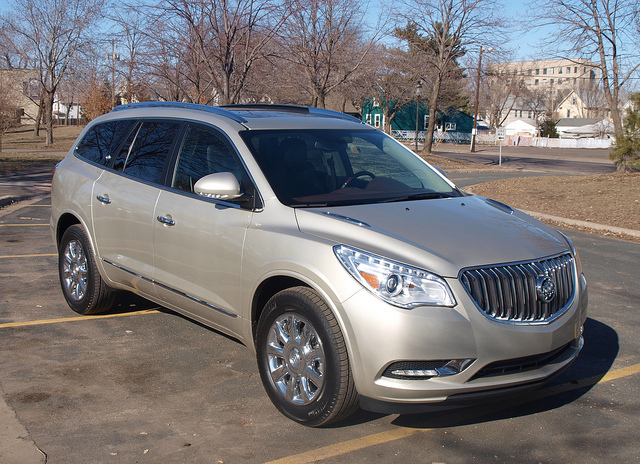 This was where Buick’s reboot began.

After a decade of offering Rendezvous, Rainiers and Terrazas, General Motors’ premium brand needed a perfect mix of all three to stay in the game. More so, GM needed to combine all three to placate the trend towards crossovers and softroaders to keep families happy. The first Lambda platform vehicles appeared in 2007. On this three-row mid-size-to-large crossover platform was one of the biggest arguments for the brand’s retention through the Bankruptcy process – the Enclave.

The Enclave serves Buick well as the brand’s big seller. When LaCrosse sales were down, the Enclave provided steady volume for North American dealerships as it served the purpose of a luxury three-row conveyance with sheer volume and comfort for any occasion. Some even preferred the Enclave to the Cadillac Escalade when fuel prices challenged the pocketbooks of middle-to-upper income families.

To build upon its success, the Enclave was given a makeover for 2013. It was a year ago when we saw the zsushed up Buick crossover with its multi-texture grille and upgraded appointments. Simply, the Enclave looks the part to continue its purpose of being the top shelf Lambda model for consumers looking at similar products amongst luxury brands.

Yet, consumers are looking downward for their family haulers. Fuel prices remain unstable and relatively high for the time being. Therefore, smaller crossovers are taking customers by storm with more efficient packages. Vehicles, such as the Enclave, are seen as dinosaurs compared to its stablemates, the GMC Terrain and Buick Encore.

Yet, there remains a need for spacious three-row crossovers and minivans. There are still families with more than four in a household that needs to transported in comfort.

The ultimate question is whether the Buick Enclave still relevant in today’s world?

The updates on the Buick should answer the question affirmatively. GM took the time to give the Enclave more presence than before with a larger “waterfall” grille featuring alternate vertical bars and better lighting up front. It is of note that the grille is more of a nod to its heritage with big waterfall grilles dating back to the 1940s.

The silhouette remains the same – an illusion of size and grandeur, even on a 201-inch long body. Large doors open up for everyone wanting access into this posh club with new rear tail lamps finishing up the updated look. 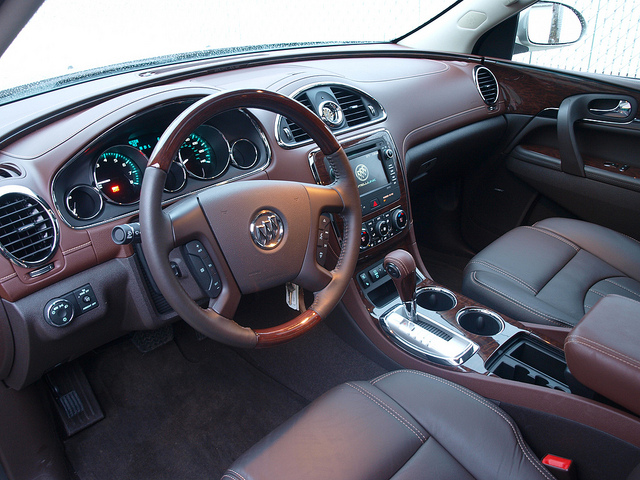 When it comes to cabin volume, the Enclave does not disappoint. The Lambda crossovers offer the best third row seating room without having to go up to the truck-based Chevrolet Suburban/GMC Yukon XL. The doors are big for access to all rows, including the rear two. In this Premium package example, seating is only for seven with separate second row seats. This configuration is best suited for families with 3-4 children or for executive transportation.

The doors are plenty big and access to the first two rows is tremendous. Once you understand how to fold and slide the second row captain’s chairs, third row access is amongst the best in its class. The cargo hold begins with plenty of volume behind the third row, and then expands to first row with a practically flat floor to work to load. You can position the second row to butt up against the folded third row for better leverage on longer cargo.

Making the cabin more “executive” was this wonderful Cocoa leather ensemble in this tester. The seats are trimmed in this darker tone of brown, while accented with a deep saddle hue on the upper parts of the dashboard and other parts of the cabin. The wood trim used in this cabin brings out the two-tone scheme inside, even with the contrasting stitching on the seats, the dashboard and along the sides.

The front seats are huge and comfortable, but lack side bolstering to keep you locked in for the ride. You get plenty of power adjustments, including lower lumbar support, to ensure comfort along the way. One such adjustment that could be improved is the steering title adjustment for taller drivers. As one of those drivers, I prefer to sit higher up for better visibility and control. The steering wheel can only go so far up to block the upper information screen in the instrument binnacle. To compensate, one would have to sit lower to ensure proper ergonomics behind the wheel.

Outward visibility was once a concern on Lambda crossovers. Certainly, the cabin’s size may not be amenable for a full round view to ensure proper maneuvering. However, the Enclave’s mirrors, reversing camera and some adjustment to your point of view would compensate over normal visibility issues from the driver’s seat.

The second and third row seats are pretty comfortable, as well. In delivering and retrieving some revelers recently, the Enclave provided superior comfort to the point of being called a limousine. At night, they also get the added entertainment of a string of ice blue LED lighting providing ambiance to the cabin. Second and third row passengers also have the option of a drop-down LED screen for video entertainment with remote headphones.

To finish out the limousine feel of the cabin, this Enclave has Buick’s IntelliLink infotainment suite connected to ten Bose speakers. Through IntelliLink, I was able to sync the phone easily through its Bluetooth connection, stream music from the same device and connect apps, such as Pandora, for optimal entertainment. Some basic controls can be operated from the steering wheel, while advanced controls would need to be adjusted on the touch screen in the middle of the center stack. 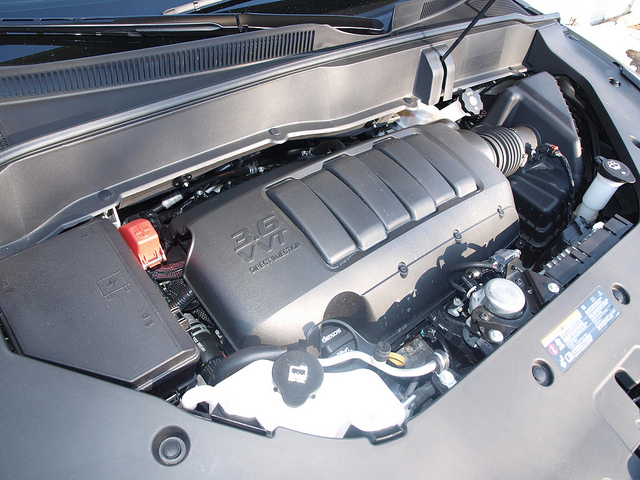 Motivating about 4900 pounds of mass is a 288-horsepower 3.6litre V6. It is a strong motor that is fine for everyday driving. However, I would prefer a bit more than the 270 pound-feet of torque to better manage heavier loads and towing. Maybe a bit more passing power would be a great help. Power is sent to all four wheels through GM’s venerable and smooth six-speed automatic transmission.

To describe the ride in the Enclave, “quiet” and “solid” came to mind. Buicks are known for being very quiet on the road, and the big Enclave was no exception. The solid part comes from the Enclave’s ability to absorb road imperfections, including those pesky post-winter cracks and shallow potholes. Deeper potholes are also conquered by the Enclave’s suspension when balancing out comfort with ensuring a solid ride. Cornering induced some lean and roll, showing off the softer side of the Enclave’s driving dynamics.

Though there were moments when the Enclave was quite a handful to maneuver in tight spots, the steering was very responsive providing more leverage in those situations. On-road feel from the steering system was real-time with the right feedback from the wheel. Braking was decent and good response in both regular and panic stopping. Though brake response was soft at times, the Enclave’s system works to gather 4900 pounds to a complete halt from the pedal in any situation.

In the course of the Enclave’s time, the all-wheel drive system was called upon to get out of a wet and muddy field. It did so without any fear, providing the right amount of torque and grip to the weakest wheel. Slipping was minimized even in changing surfaces transitioning from wet grass to mud to the rare dry spot. The driver must balance out the throttle to give the AWD system a chance to get out of a traction-loss situation, which makes operating the Enclave quite effortless.

As the Enclave provided limousine comfort and a balanced drive, fuel economy was a huge concern. Even when fueling up with regular unleaded, the Enclave still turned an average of 17.4MPG. This seems to be about the right fuel consumption figure for GM’s Lambda crossovers.

Pricing for the Enclave begins at about $39,000. This Premium Group example scaled up to just over $52,000. You hit maximum capacity on the options list for another $1,000 more. 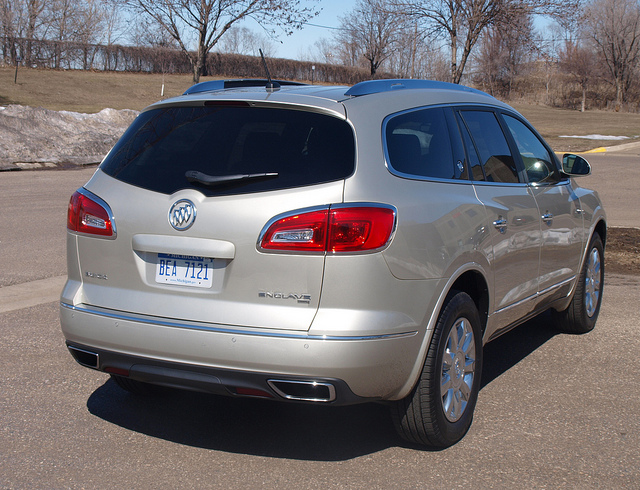 It is easy to say that the Enclave is a luxury three-row crossover that serves as a better alternative than the traditional truck-based SUV. I would do better than that. It is a destination for families who care about style and standing apart from the crowd. Even with its modern design and technology, the Enclave is also a throwback to when space mattered to families – back to the days of the Estate Wagon.

Though its size can be a bit imposing, you might find that the Enclave’s advantages work well in your favor. Is it the best “family truckster” around? Bring your family along for a drive to see for yourself. Better still, acquire one for livery service.