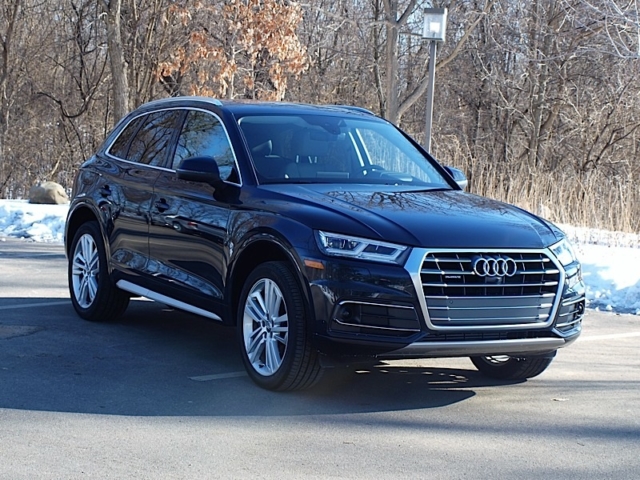 Every time we get an SUV in for our Ride Reviews, we often end up repeating ourselves.

SUVs are the hottest market in automobiles right now. Smaller SUVs are driving sales of these utilities. However, there is one bit of information we have not stated before: the intensity of the rivalry among upmarket small SUVs.

Premium and luxury car brands are highly competitive. It stems from owner loyalty, brand chauvinism, and the highest stakes possible to be the absolute best among everyone else. If one vehicle offers a new technology, a rival vehicle will top that with a new twist on the technology or an entirely new feature altogether. This is a game of knothole with everything for the taking to the winner.

This translates into a fierce rivalry that has yielded annual winners. However, one such vehicle has risen to the top of this illustrious pile. In this SUV’s case, the reason for its leadership is not due to sales alone—it was the second-best selling vehicle in its segment for 2017 behind the Lexus NX. Nor does it have something exclusive that is light years away the best and most advanced feature or design of its kind. It is simply that it is the best all-around vehicle in its class.

That is what many of our intelligence network told us about the Audi Q5. We had to get one in to find if our intelligence was correct. What arrived was a lovely Q5 with the top-of-the-line Prestige package in a lovely Moonlight Blue metallic finish. 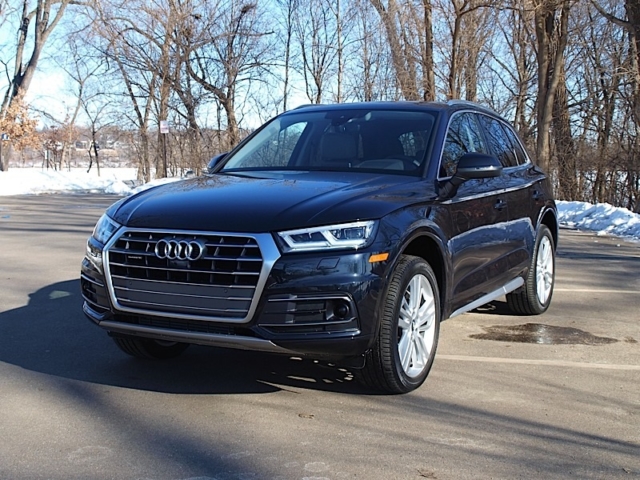 There are a few things that are truly enjoyable about the Q5. The rear liftgate opens wide, which helps in loading wider items. The doors open equally wide, but rear door openings are just right. Our tester came with equally handsome and luxurious 20-inch wheels, part of the Prestige package. In all, the Q5 is unmistakably distinctive and absolutely easy to the eyes. 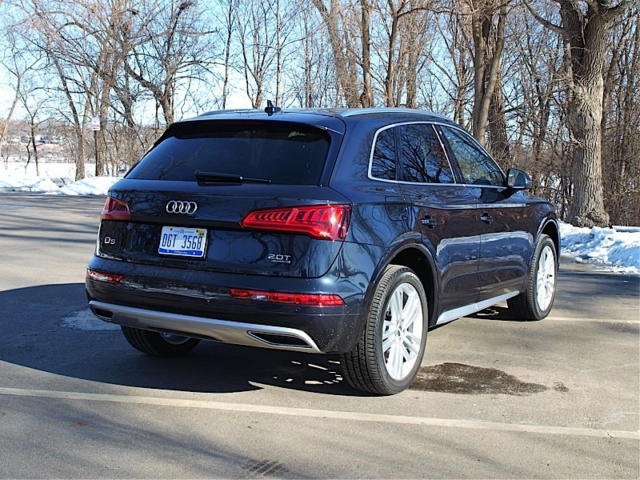 Where the Q5 stands out is the interior. It is not about the layout or the seats. It is also not about equipment levels. The big win for the Q5 is the level of quality of the materials used throughout the cabin, the controls and the readouts. The first thing that will jump out inside is the Virtual Cockpit: a full TFT screen that is customizable and easy to read. The instrument binnacle is anchored by two dials—the speedometer and tachometer—where the middle part of the screen can give you any bit of information or facilitate any settings you make for it. In comparison to other vehicles in its class, this is the best instrumentation setup of them all! 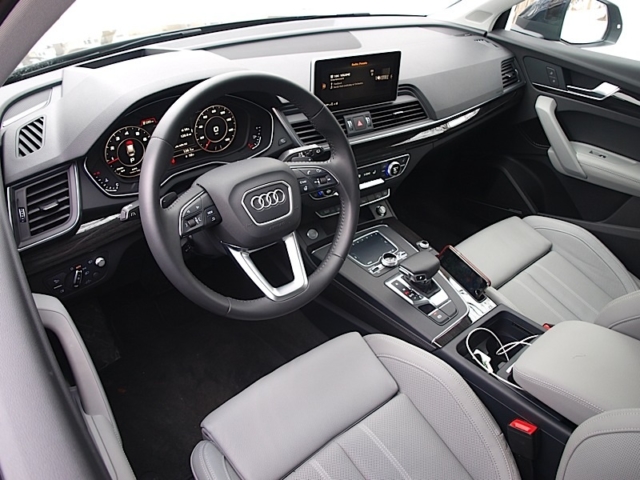 The seats in the Prestige package are made of durable leather that is sporty and luxurious. Front seats offer proper bolstering while providing the right balance of support and comfort. The rear seats are fine, but leg room is a bit short. Making things interesting is a high transmission tunnel giving a center passenger a challenge to fight for foot room on either side. The Q5 is really made for four adults, which in many cases are just fine. Rear cargo space starts off with 26.8 cubic feet behind the rear seats, expanding to 60.4 cubic feet through to the back of the front seats. 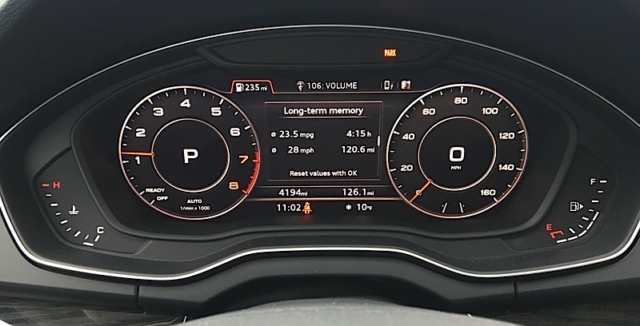 The tablet-like infotainment screen that sits on top of the instrument panel is controlled by the MMI knob on the center console. Once you get through the sequence of screens through the knob, it becomes almost natural. The word here is “almost,” because the MMI system can also connect to your smartphone via Apple CarPlay or Android Auto. One thing to keep in mind is that it is not a touch screen system, therefore you must use the knob to control your smartphone functions. The good news is that the response from the MMI knob is very quick, which you can go from smartphone screen to the MMI interface with a couple of turns.

Once you have everything settled through the MMI system, sit back and let the 19-speaker Bang & Olufsen system with 3D sound entertain you. With a 16-channel amplifier and 755 watts of power, you will indeed rock your Q5 like your own personal dance club. 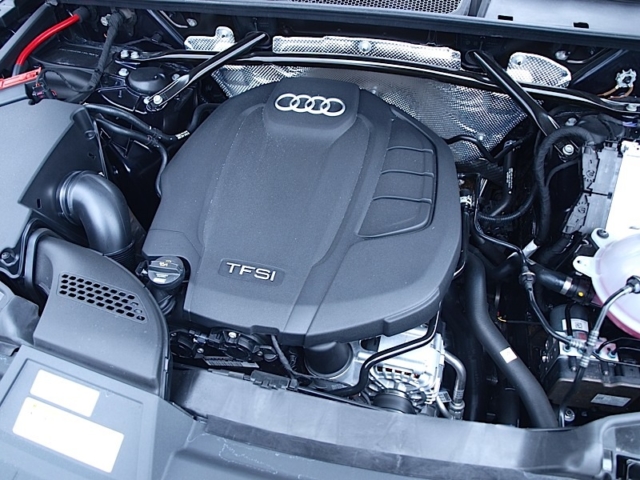 Powering the Q5 is a 2.0-liter turbocharged four-cylinder engine putting out 252 horsepower and 273 pound-feet of torque. Connected to the superb engine is a seven-speed S-tronic transmission channeling power to all four wheels with Audi’s signature quattro all-wheel drive system. It is a solid engine that likes to chill and get motivated, depending on how much pressure you put on the accelerator pedal. It will also return decent fuel economy. Our average in our care came out to 22.7 MPG in the end. We did see a high of 24.3 MPG in our care when the weather was above freezing.

If there is a reason to get the Q5 over the competition, it’s its driving manners. The ride quality is superb, and it does its best to keep things even over bumps and rougher surfaces. Handling is superb, as it handles turns and evasive maneuvers very well.

The Continental all-season tires could be better on icier surfaces, but the quattro all-wheel drive system does a great job to send traction to all four corners when necessary. You can also manipulate the system a bit by switching drive modes, We found the Offroad setting useful on snow and ice. Auto works well when traversing various surfaces. If you want a bit more fun on drier roads, Dynamic stiffens up the steering, suspension, and transmission shifts for more aggressive driving. 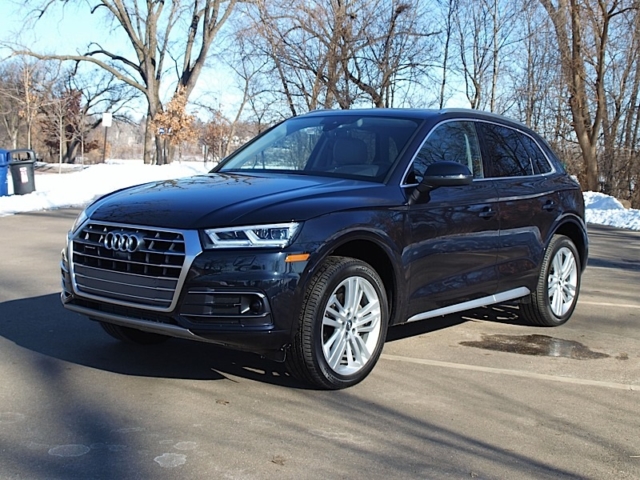 The brakes are great in every condition, including winter stops. Pedal feel is terrific, as expected in an Audi. Steering is also quite good, giving us tight turns and great response from the wheel. Active safety is also a strong Audi trait, as its suite of features made for better driving in our care. This included adaptive cruise control, lane departure warning, blind spot monitoring, rear cross-traffic alert, and a 360-degree camera. There is also a semi-autonomous feature that allows you to drive with your hands off the wheel for a brief moment while maintaining a location within the lane. There are two cameras positioned where the fog lamps would normally go that facilitates this feature.

The biggest piece in this Q5 to discuss is the Pre-Sense system that uses all of its sensing technology to help prepare the vehicle to ensure its occupants will be just fine if a collision is to occur. It detects pedestrians in the Q5’s path, monitors the side and rear areas, and enables occupants to be wary of oncoming traffic—including bicycles—before leaving the vehicle.

The Audi Q5’s pricing starts from $41,500. Our 2.0T Prestige trim model came with a sticker price of $56,100. If you want something more than your average Q5, there is the high-performance SQ5 with a 354 horsepower turbocharged V6 engine underneath its hood. Pricing for the SQ5 starts at $54,300.

What makes the Audi Q5 a story worth telling is the impact these smaller premium SUVs had in the luxury vehicle market. A luxury brand no longer can count on their image-making sports sedan to lead the charge to earn more upwardly mobile customers. Even as the Bavarian four-ringed brand will still attract customers with sexy offerings—such as the R8 supercar, the RS7 high performance hatchback, and the upcoming 2019 A8 advanced flagship sedan—customers will still buy the Q5 by the thousands.

The Q5’s customers have absolutely no shame in taking one home over some of Audi’s more desirable attractions. They know something we now know about this SUV: it is absolutely the best vehicle in its segment.