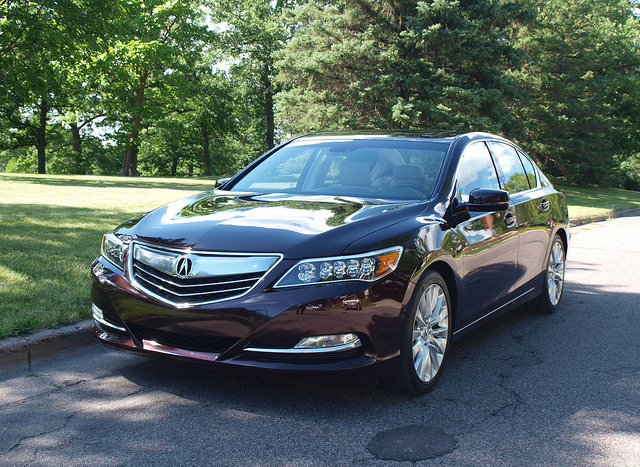 Twenty-seven years ago, Honda broke new ground by introducing the first world-class luxury car from a Japanese automaker – the Acura Legend. It combined honest luxury with a sports car feel. Luxury car buyers flocked to Acura dealers to become first adopters of the brand, creating a reputation for loyalty served by superior and personable service.

The Legend still exists. Today, it is called the Acura RLX. In essence, this is the fifth generation of the car that really started it all.

One look at the RLX provided clues of its heritage. One would say that it is a modern interpretation of the original 1986 Legend. It appears to be low, wide and aggressive. The only clue to its modernity is its satin and chrome embellishments and shield grille. One would also argue that it is derivative of most of today’s Honda and Acura design – an “oversized Accord,” if you will. If one would recall, the original Legend was based off of the Accord of the time and had plenty of clues from its smaller cousin.

The Acura flagship signifies the arrival of a new design feature shown as an option for lighting technology – the “Jewel-Eye” headlamp cluster. This is an all-LED set up that supplants all prior lighting technologies with a series of progressive lenses ranging from daylight running lamps to high beams. The Jewel-Eye cluster gives something Acura has been looking for after years of searching – a distinctive design feature that speaks for the brand. 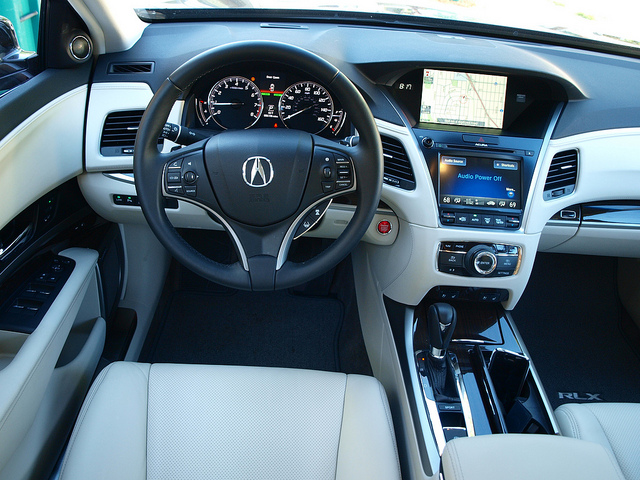 For occupants, the big doors open to better access to the cabin. A large trunk is accessed by a large decklid. Interior space is large providing room for four-to-five adults in expansive comfort. The fifth passenger in the back will have to straddle a “transmission” hump, despite the absence of a driveshaft underneath. Also, if you are under six-foot-one, you may find solace in the space behind the moonroof to prop your head. However, you will find fantastic legroom front and back – you might even call it “limousine-like.”

The RLX instrumentation offers an analog experience with a TFT screen to keep you informed of trip, fuel consumption and vehicle function information. In the center stack, you get two screens. One is a touch screen the controls the audio, climate control and some vehicle settings, while the larger screen on top is used for navigation, rearview camera and other key functions available from a twist of the knob below. Controls are right to the touch all around.

If you look above the instrument panel, one will notice two new buttons never seen on any Acura. These two buttons represent the rebranding of AcuraLink – now as the brand’s telematics program. These buttons are used in sending navigation directions to the car, connecting with roadside assistance, help in traffic routing, and making emergency contact with Acura in case of an accident or other incident. You can also utilize a smartphone app to work in concert with AcuraLink to use all of the services available even away from the vehicle.

The real treat for the RLX’s occupants is the Krell premium audio system on board the Advance package. With fourteen speakers positioned perfectly around the cabin, everyone on board the RLX enjoy perhaps one of the finest audio systems on any vehicle under $70,000. The sound is simply magnificent, no matter if you use your USB device, a Bluetooth connection or listen to AM, FM or SiriusXM. AcuraLink also adds streaming services such as Pandora and Aha to be filtered through the Krell system. 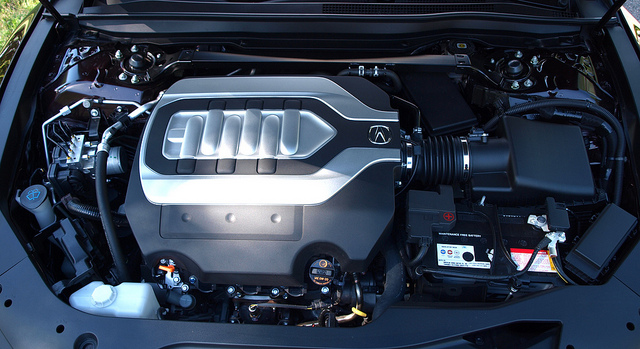 Under the hood is a higher performance version of the corporate 3.5litre V6. For the RLX, power has been raised to 310 horsepower, with 272-pound-feet of torque. The V6 is responsive and reacts to the throttle nicely. A six-speed automatic send power ultimately to the RLX’s front wheels. There is a Sport mode available, which tightens up the throttle response and reprograms the ratios. However, you will lose the sixth gear when Sport mode is activated. For long highway cruises, it is best to leave the Sport mode alone for better efficiency.

In terms of driving dynamics, the RLX offers a lot to consider. On smooth surfaces, the RLX glides without complaint. Throw it onto some coarser surfaces, ride through bumps and lumps, and it will react to the road. The RLX is softly sprung and feels that way. Yet, in the curves, it is poised with minimal lean and roll. Handling is quite good overall as it manages the 3,997-pound Acura through its paces. Brakes are solid with quick and sure stops in both normal and panic situations.

The biggest piece of the RLX’s puzzle comes with a new all-wheel steering system. The Precision All-Wheel Steer (P-AWS) system enables the nineteen-inch wheels and Michelin Primacy MXM tires to turn swifter and tighter than its 112-inch wheelbase would normally do. The rear wheels assist the front ones to create the tightest turns of any large vehicle on the road. Overall wheel response is excellent with the system enabled.

Acura added a few more touches to make driving the RLX easier for everyone. The combination of Adaptive Cruise Control and Lane Keeping Assist enables the driver to maintain a safe distance at a regulated speed, as well as locking the steering system within the lines. If you do find yourself veering out of your lane, the Lane Departure Warning will beep to get you back on track in your lane. All of these systems are great, if you are doing a drive of significant distance.

Normally, flagship sedans are not the most fuel-efficient vehicles around. However, the RLX serves up an average fuel consumption rating of 24.0MPG. Considering the weight and performance of the RLX, this is considered pretty good. More efficiency is on the way with a future introduction of a hybrid model combined with Acura’s Super Handling-All Wheel Drive (SH-AWD). That model is a few or months away from introduction. 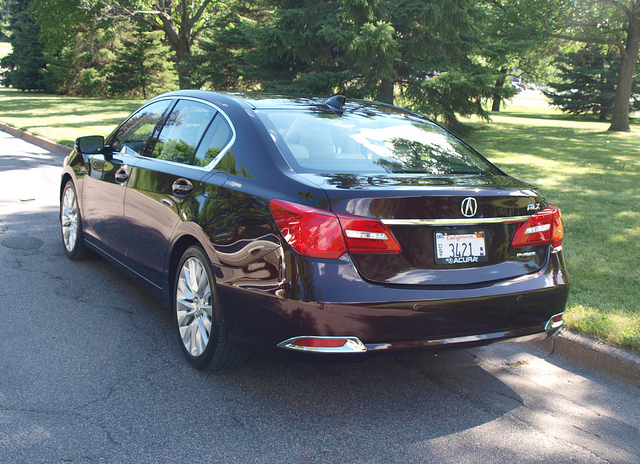 The RLX starts at under $50,000. The Advance package model tested came in at $61,345. This puts it in good company – namely the Cadillac XTS Premium, Mercedes-Benz E350 and Hyundai Equus Signature.

The best way to describe the RLX is evolutionary. Looking back 27 years ago, the Acura Legend broke ground by providing a world-class luxurious experience never experienced from a Japanese automaker. It felt comfortable, sporty and had the best technology of its time. This theme continues in the RLX. The technology may have advanced in great leaps, the essence of the RLX remains. It is the 1986 Legend sedan recreated for today’s luxury car buyer.