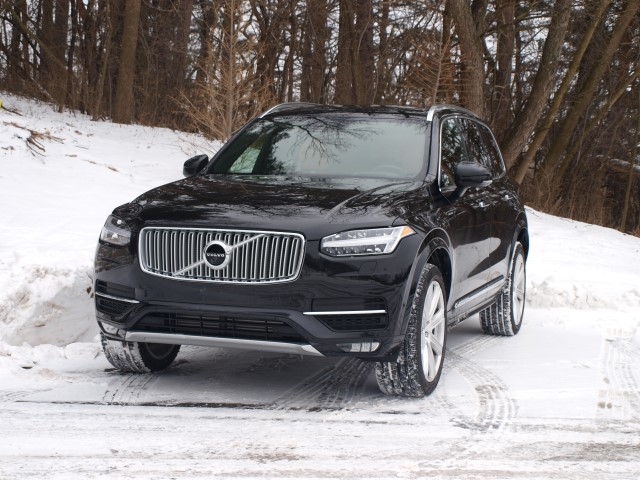 What you are looking at is “the most awarded SUV of The Century.”

This is truly an audacious statement, given that this century has just had its 18th birthday. However, it is not without some truth. It won Motor Trend’s SUV of The Year for 2016. It also won the 2016 North American Truck/Utility of The Year. It scored many, many accolades from consumer websites, media associations, and other automotive enthusiast websites, including Twin Cities-based Victory & Reseda.

The brand making this statement happens to be Volvo Cars. The vehicle in question is the Volvo XC90. This SUV received its accolades because of one particular reason: it has reversed the fortunes at Volvo.

The XC90 has been the lightning rod for the rejuvenation of Volvo. In the United States alone, XC90 sales accounted for around 44 percent of all new vehicle sales within this model’s first full year. Since its introduction, the XC90 has spurned on double-digit sales growth for Volvo in North America alone. The ultimate result is that you are seeing more XC90s on the road, which is really a good thing.

Just so happened that I had in for review a 2018 T6 AWD Inscription model. It seems like a perfect situation to find out whether it befits the audacious statement seen on their website. 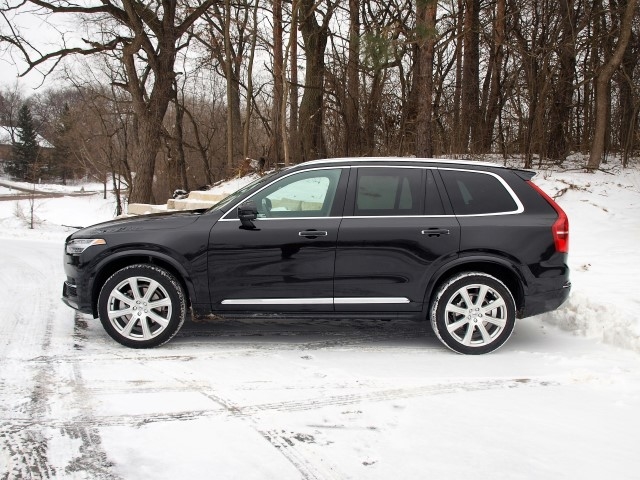 When you see the latest XC90 for the first time, it is easy to dismiss the boxy appearance. One would think that perhaps Volvo has returned to its “brick” roots and this new mid-sized luxury SUV lacked design imagination. One needs to look very closely to see that the XC90 is not a “brick” like an old “redblock” from the 1980s. There are shapes, curves, textures and other visual tricks that entertain the eye from the protection blade in the lower fascia to the oddly shaped tall tail light assembly.

Actually, the look of the XC90 is absolutely luxurious. While it will play with the likes of the BMW X5, Mercedes-Benz GLE, and the Audi Q7, it is absolutely a standout in its own right. You know an XC90 when you face its massive grille and run your hands through its body. You admire the glass size, something that has been somewhat abandoned in the SUV market. You also admire a lot of the innovations all around it, starting with the power leveling feature upon load in/out.

The XC90 comes in four trim levels: Momentum, R-Design, Inscription, and Excellence. The Inscription is the XC90’s signature in design, with its satin-chrome grille, chrome lower accent, large 21-inch satin-chrome wheels, and other extra touches making this the most beautiful vehicle ever crafted by Volvo at this moment. The big attraction to the XC90 is the “Thor” headlamps—a complicated unit combining an LED “Thor” hammer lens incorporating daytime lighting and turn signals, along with multiple LED units incorporating lights that “bend” when you turn the steering wheel. They also emit the best frontal lighting I have seen in any vehicle in a very long time.

Volvo had always been known for logical and neat interior spaces. Most of it has been dictated by their own stringent safety standards that are ahead of this industry. There is also a marriage of form and function—something you may have seen at IKEA when shopping for its affordable flat-packed furniture and household goods. However, the XC90’s interior is far from IKEA. Think of Room & Board or some high-end furniture place exuding a clean, uncluttered and enjoyable space to simply be in. 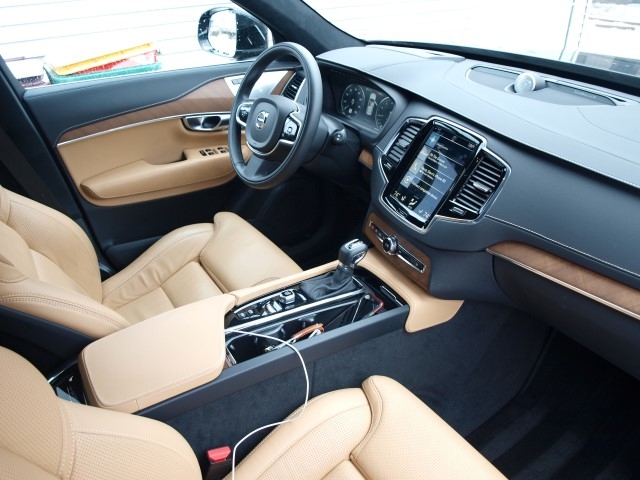 This starts with the instrument panel. The TFT screen is customizable and dynamic, with various settings and readout to optimize your view of what’s going on with the vehicle. The instrument panel itself is a work of design precision, offering both luxurious touches and ergonomic simplicity. The switchgear for the XC90 is a step forward from current Volvo designs with superb touch/feel.

The main feature of the XC90’s instrument panel is its nerve center: a large, tablet-sized touchscreen that controls almost every aspect of the SUV. Here is where the driver—and passenger—can adjust practically every vehicle function, adjust infotainment features, the drive modes and even read the Owner’s Manual. It is a fascinating piece of technology that makes the XC90 very useful to operate.

The Inscription’s Nappa leather seating offers both comfort and support with various settings to choose from. On top of power-assisted adjustments for height, rake, and recline, there are also bolster, lumbar, and cushion extension adjustments available for both the driver and front passenger. Inscription models may also include the massage feature exhibited on this tester. Also, both front seats offer their own memory settings.

The seats themselves are a perfect size and offer its occupants superb comfort throughout all three rows. Second-row occupants can adjust their seats for recline and rake. Third-row seating is easily accessible with a quick flip-move of the second-row outboard seat. There is limited room for adults in the third row, so those seats are highly recommended for children. There is also a rear headrest fold-down available, in case you need more vision behind you. 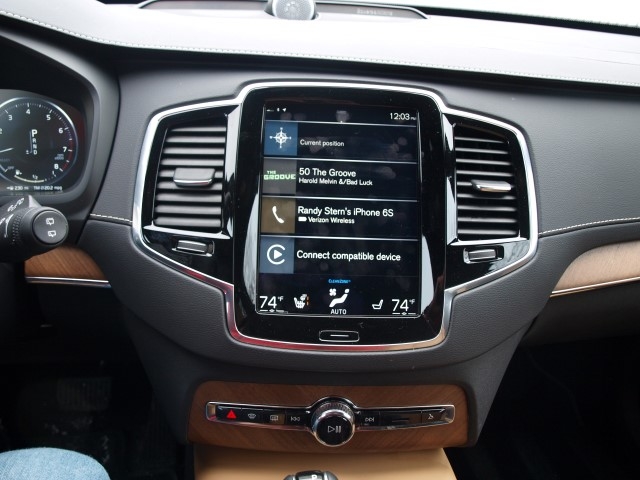 While enhanced by the power load leveling feature, the cargo space itself is quite useful. There is up to 85.7 cubic feet of expandable space available, once you fold down the second and third row of seats. Even with the second row of seats up, the cargo hold is quite massive and can pack a week’s worth of camping without wondering if to bring more people than stuff.

The jewel of the XC90 Inscription’s crown is the Bowers & Wilkins audio system. This is a 20-speaker system with a 12-channel amplifier and 1,400 watts of crisp, clean and pure audio playback. To enhance this sound, go to the Sound Experience menu, where you can truly feel this speaker system through three settings. Some music sounds spectacular in Concert Hall mode, while others sound equally superb in Studio mode. On individual Stage, you can adjust the intensity and envelopment of the sound around you. In all, this is the best manufacturer-installed audio set-up I have ever experienced in my driving life. The XC90 features Apple CarPlay connectivity, Bluetooth streaming and phone tethering, SiriusXM and HD Radio broadcasts.

The beautiful noise from the Bowers & Wilkins audio system perfectly complements the muted resolve of the T6 Drive-E engine. It starts with a 2.0 liter four-cylinder engine, joined by both a turbocharger and a supercharger. Total output is at 316 horsepower, with 295 pound-feet of torque sitting between 2,200 and 5,400 RPM. It is the best and most dependable choice among the three powerplants offered on the XC90. With the T6, you get all-wheel drive with an 8-speed Geartronic transmission and an Auto Stop-Start feature. In all, this is a great driveline with smooth shifting and fantastic traction. For fuel economy, we got an average of 20.7 MPG—a bit better than other luxury non-hybrid SUVs we’ve encountered over the years.

There are four drive modes to choose from, ranging from an economical driving set-up in Eco through Dynamic, which makes the XC90 T6 a spirited SUV to drive around in. There is an Off Road mode, which raises the suspension to compensate for indifferent traction situations—such as the rutted dirt road to the cabin made even worse by a heavy rainstorm. Overall, we found the suspension working hard to absorb everything in its way to make the ride very smooth and enjoyable over long stretches. It handles very well, but there is some lean and roll over its limits. In Dynamic, cornering is superb with its lowered drive height and concentrated dampening. 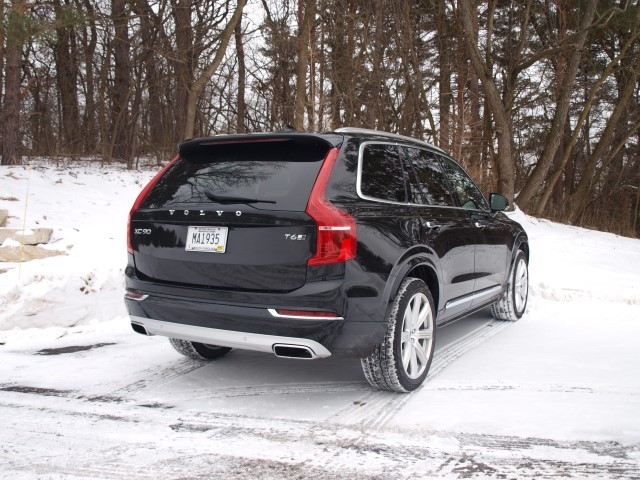 Steering the XC90 might not induce the tightest turning radius in its class, but it is actually very maneuverable. The steering action is excellent, just the right amount of effort for the job. On-center feel is good, even better in Dynamic mode. I also found the brakes to be superb with great stopping power and sure response in both normal and panic modes. They also do a great job working with the adaptive cruise control system, a part of the IntelliSafe suite of active safety technologies that make a Volvo with it truly is: safe.

The XC90 lineup is available with three different engines and four trim levels. Starting price for the 2018 XC90 is $46,900. That will get you a T5 FWD Momentum model. Our T6 AWD Inscription tester came with a complete sticker price of $74,090.

Let us cut to the chase: the new Volvo XC90 is excellent. Perhaps the best SUV we have driven ever. We should qualify that further: in the realm of premium branded vehicles, the XC90 is a well-executed, high-quality SUV that satisfies the luxury, performance, and practicality quotient customers are looking for today.

Because of its execution, the Volvo XC90 confirmed every award it has received since its launch. It is a winner in every sense of the word. It reaches for the superlatives and offers more to everyone that wishes to return to the Volvo fold. 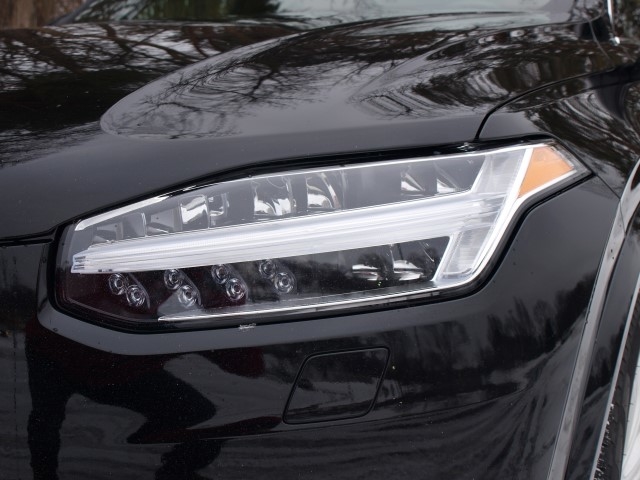 The most awarded SUV of The Century? The Century is still young, but the Volvo XC90 can back up that claim with an absolutely excellent vehicle.