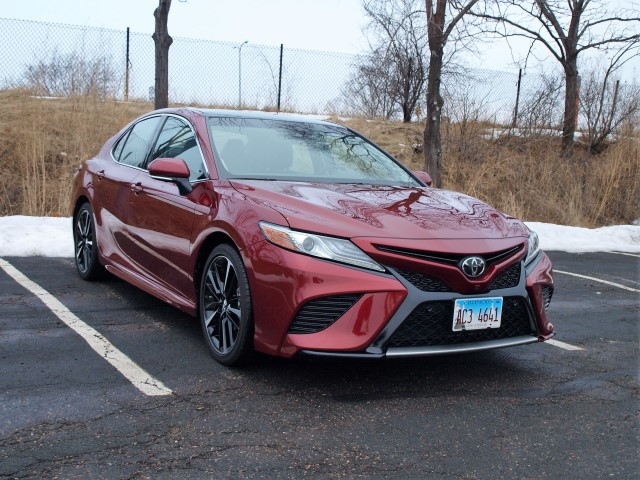 Would you believe that someone has called the car you are seeing on this page “sexy?”

Over a year ago, someone very prominent declared the 2018 Toyota Camry as “sexy.” That person is known to have a sense of humor. But, this person said so with conviction in front of the global media on stage at the 2017 North American International Auto Show in Detroit.

That person was Akio Toyoda—the president of the Toyota Motor Company, Ltd.

He would have some sort of authority calling the eighth-generation Camry “sexy.” It could be a marketing ploy, which the assembled media fell for hook, line, and sinker. Or, he could be right in his summation. The latter became the truth with almost every journalist and blogger gushing on how far Toyota has taken the latest Camry to new styling heights.

The summation fell along these lines: It’s not boring, nor ugly… just a major advance in Toyota design for one of its biggest selling products in North America.

Do we agree with the rest of the automotive media corps? 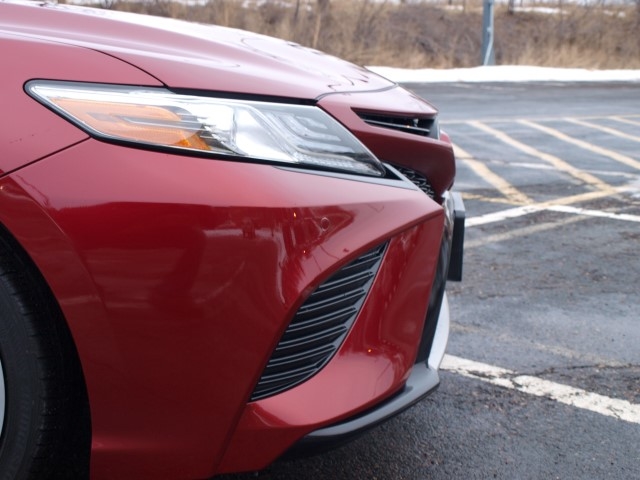 We are GLBT people. We demand style to go along with our lifestyle. That is a stereotype, mind you, but it is rooted in some sort of reality. Yet, we own Camrys. Those owners do not mind that they are reliable, well-built, dependable, and roomy for four adults. In fact, those are the reasons why people buy or lease tens of thousands of Camrys every month in this country alone—not just GLBT owners.

Upon the first gaze of the 2018 Camry, we would have to agree with the rest of the automotive media corps. Toyota took a major risk on pushing their popular mid-sized sedan into new design territory. It paid off because the execution is well worth the effort. The front end is more three-dimensional with an open T-shaped upper grille and a choice of two lower grille treatments. For L, LE, and XLE models, a set of wide horizontal lines dominate the space below the “T.” On SE and XSE models, it is a mesh grille split by a black lower frame and “gills” on each side of the lower fascia. Smaller LED-driven headlamp units finish up the front end, giving it a more aggressive look.

The side profile features a more natural look, with various lines, curves, and textures. The roofline is lower than before, with more rakish front and rear window angles. The window area actually is larger, as are the doors over previous generations. The rear end is complimented with new slimmer taillight units and a more aggressive bumper and decklid shape. SE and XSE models add an additional trim piece on the corner of the bumper, a rear spoiler, and additional side rocker panel pieces giving it more aggression to the finish.

Our XSE tester had one additional finish piece to the Camry’s new look—a set of black and satin chrome finished 19-inch wheels. If you want the essence of what Mr. Toyoda said about the Camry’s sexiness, look no further than the top-of-the-range XSE. 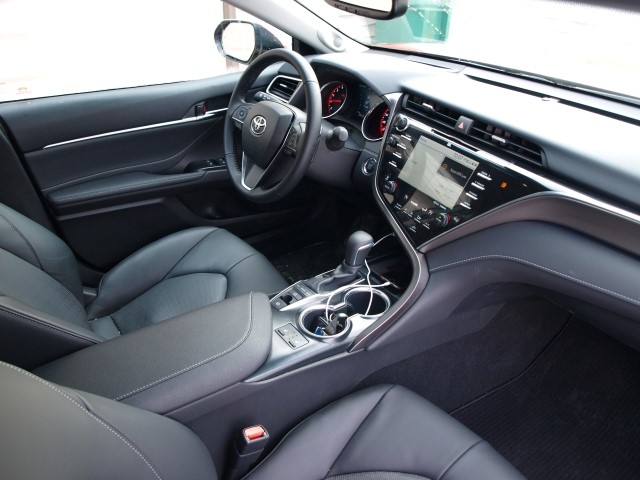 That same theme of total change continues in the cabin. Drivers are greeted with a wider instrument binnacle, a triangle-shaped center stack, and a deep center console with more storage than before. The shifter is now in a slimmer, straight up-and-down housing, instead of the staggered shift pattern Toyotas are known for. Most models get the standard 4.2-inch information screen in between the speedometer and tachometer dials. The XLE and XSE get the new 7-inch TFT information screen with superior graphics and information.

Seating in our XSE tester is a departure from Camrys of the past. The front seats have a shape that integrates comfort and support. The tester’s leather upholstery was perfect to the touch and had a very sporty feel. Although a bit more bolstering for the XSE’s seats would make them perfect, rear seat room is fine for many bodies to sit behind each other. Trunk space is spacious, even with 15.1 cubic feet measured behind the rear seats. The rear seats fold down for longer cargo.

The infotainment system is driven by a new generation of Toyota’s Entune suite. The third generation Entune is quicker and allows for an app-based navigation system to be used between your mobile device and the vehicle. Just download the Scout GPS app and you’re connected. Otherwise, it will play back your music files via USB or Bluetooth, offer HD Radio and SiriusXM satellite broadcasts. JBL positioned nine speakers throughout the Camry XSE’s cabin with Clari-Fi sound processing.

Toyota may have created a sexy Camry. They also went to work on how it should drive. The standard 2.5-liter four-cylinder engine underwent some major changes internally for better performance and response. Power is now up to 203 horsepower, and it is connected to a new eight-speed automatic transmission. The Hybrid driveline was also updated with the same four-cylinder engine coupled to an electric motor for a net power rating of 208 horsepower. 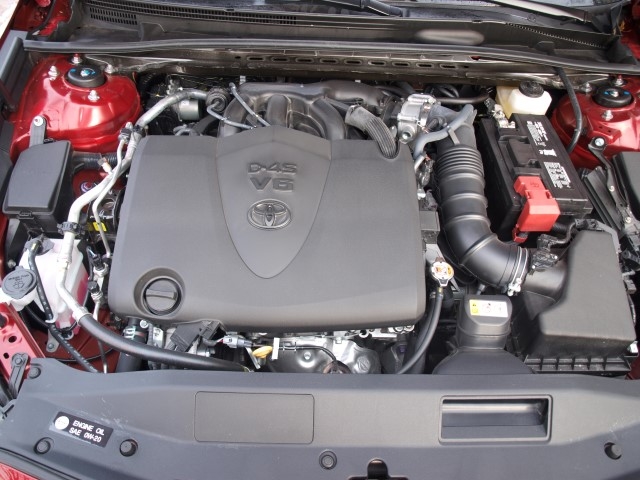 This XSE tester gets the updated 3.5-liter V6 engine, now good for 301 horsepower. This V6 is also coupled to the new 8-speed automatic transmission. This is truly the engine to get because it offers superb response and smooth power. It simply turns this mere Camry into a Lexus F Sport of some kind. While the power is great, the fuel economy was a letdown—partially due to colder temperatures during its testing phase. We averaged 22.7 MPG in our time with the V6-powered, sexy, sporty-looking Camry.

Smooth is the word for the driving dynamics of the Camry XSE. The ride quality is on the firm side but has some suppleness to it. You can see it in the handling, where the cornering and agility are tempered, but tame. Steering is also pretty good, but Normal and Eco mode offers a bit of play on-center and some vagueness overall. That is easily fixed by putting the Camry XSE in Sport mode, where the steering feel is heavier and more controlled. Also, Sport mode offers transmission shifts that are more aggressive, using higher revs without penalty to overall engine performance.

The 2018 Camry lineup starts from $23,495 for a basic L model. Our XSE tester came with a sticker price of $37,813. In-between is the right combination of equipment, comfort, economy, and performance you might just need. The Camry comes in nine different versions to choose from, including three Hybrid models. 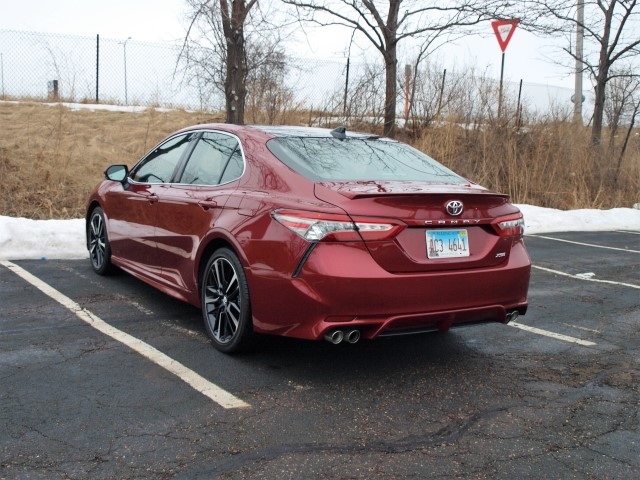 For being Toyota’s now-second-best-selling model in the lineup—behind the RAV4, which had a superb 2017 in terms of sales—it has clearly become the best generation in its 35-year history. It does everything well, especially the top-of-the-line XSE model with its sports sedan aggressiveness in a mid-sized family car.

As for the “sexy” part, let’s just say that the complete package certainly makes it so. You can’t argue with the boss and your fellow colleagues, can you?