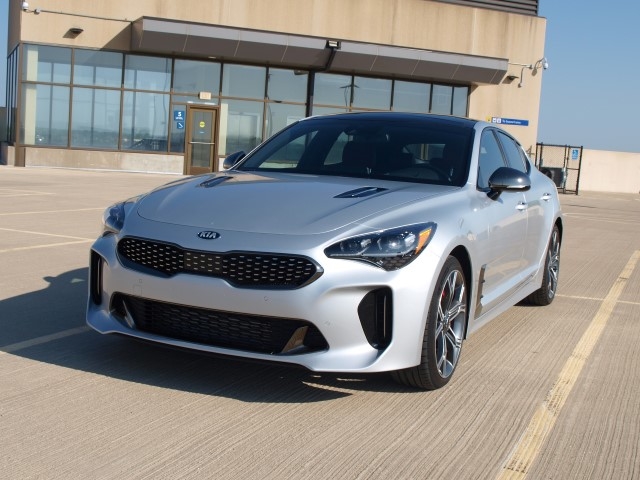 In the past, larger hatchbacks had been hit-or-miss on in this country.

The first Volkswagen Dasher was a hit. It introduced us to a new kind of car from the Wolfsburg brand: water cooled front-engine with front wheel drive. But that was the mid-1970s, when there was an oil crisis and larger American cars were getting pummeled with blame for being inefficient.

Since the Dasher, there had been other cars. I recall the Merkur Scorpio, which was a 1980s European Ford sold at Lincoln-Mercury dealers. It was a well-designed car, but due to a lack of execution for the price it was commanding, it was unsuccessful.

A few decades later, Audi tried its hand on a large hatchback: the A7. Because of its Audi Sport variants—namely the hot RS7—it was a smash hit here in this country. This was followed up by the A5 Sportback, which also had its share of buyers here in the USA.

BMW had several hatchback models for the 3-, 4-, and the 5-Series. They had fastback versions of their SAV (read: SUV) lineup, the X4, and X6. All of these models had added some success to the Bavarian car marker. 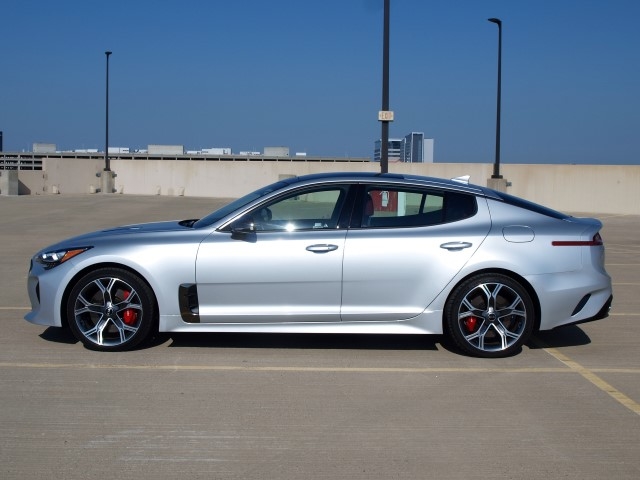 The next entry to this list comes from the Republic of Korea. Lately, they have been adding luxury and performance cars to their portfolios to some success. It may have come as a surprise to some that Kia had created a large hatchback of their own. One that offers a lineup of turbocharged engines mounted on a rear-drive platform.

It sounds like a superb idea… except for one little problem: the badge.

Kia had been known for budget-to-mainstream models that appealed to the masses. Yet, they also dabbled in premium offerings, such as the Cadenza and K900. The idea behind the Kia Stinger was to create a halo car towards the upper end of the lineup that offered hatchback practicality, sports sedan performance, and great styling.

The buzz was loud and positive from our fellow media. It was our turn to find out whether the Kia Stinger will hit the premium car jackpot with this four-door sports hatchback and if the buzz is as good as everyone else had reported. 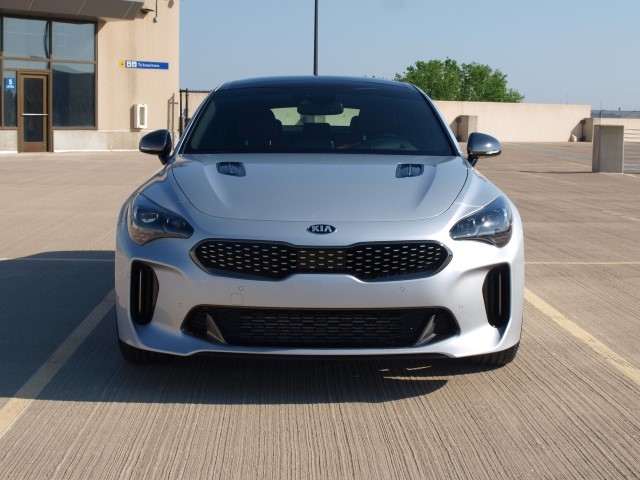 It begins with a sleek fastback look. The front end is lower than a lot of Kia models, but the “tiger” grille fits perfectly in-between a set of LED headlamp units. The hood is long, but that indicates its rear-drive roots. The roofline is swept back with a glasshouse taken from several Kia models, cutting short to a long C-Pillar blind spot area. The hatchback opens up from the bumper for enough room to load/unload cargo and luggage. LED tail lamps and bridged by a single strip crowing the rear end.

Our GT2 tester adds 19-inch alloy wheels exposing a Brembo four-disc braking system. This trim level also adds a specific grille texture with a protector for the driver’s assistance guide, additional lower aerodynamic aids up front and around the car, plus four exhaust tips and a diffuser.

The sporty atmosphere continues inside. This is the first Kia with a truly driver-focused cockpit with a low cowl, an instrument binnacle with a lot of information available to the driver, a heads-up display that is clear and informative, a steering wheel with the right controls for the adaptive cruise, infotainment system, the information screen between the dials, and the paddle shifters for the automatic transmission.

The center console features a shift-by-wire shifter that is a bit tricky to work for reverse and drive. The park button is behind the shifter. You also have a small knob for the drive modes—which there are five to choose from. 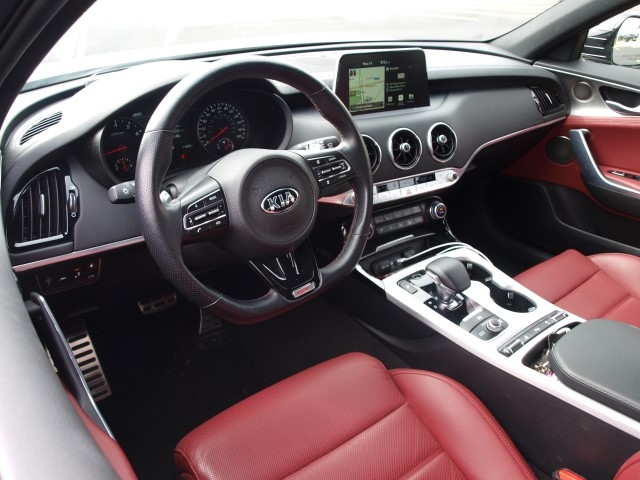 On top of the center stack is a tablet-like eight-inch screen for the UVO-driven infotainment system. Harmon Kardon provided 15 speakers of superb surround sound throughout the cabin. You can connect your smartphone through Apple CarPlay and Android Auto, as well as a choice of various sources for entertainment.

Our GT2 tester came with well-bolstered seats upholstered in a deep red Nappa leather. There is plenty of comfort to be had, but it is also supportive when doing more spirited journeys. Both the driver and front passenger seat have power rake, height, and recline adjustments, plus lumbar and seatback bolster adjustments as well. The rear seats are also upholstered in the same red Nappa leather and offer plenty of comfort. Legroom is great, but taller people will have to watch their heads as it will rest where the roofline starts sloping rearward.

The hatchback opens up to a cargo space that is expandable to 23.3 cubic feet. The rear seats fold down in a 60/40 split. The space behind the rear seat is long, but not deep.

Stinger models offer two choices in engine performance. Standard is a new 2.0-liter turbocharged four-cylinder engine with 255 horsepower. Choosing any of the three GT models will upgrade you to a twin-turbocharger 3.3-liter V6 engine with 365 horsepower. Either engine is connected to an eight-speed automatic transmission sending power initially to the rear wheels. Our tester had the available all-wheel-drive system. 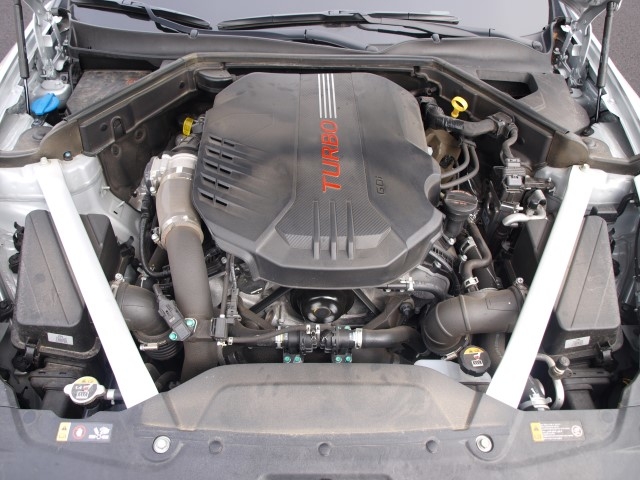 Needless to say, our Stinger GT2 AWD tester is very quick. It is also quite fast. The reason to buy a Stinger GT over the four-cylinder model is performance that has never been seen on a Kia—ever. And it is quite refreshing! However, we did observe an average for fuel economy of 22.7 MPG.

Being quick and fast means optimal vehicle control. The Stinger exhibits that with sharp reflexes and confidence through the curves. The handling is pretty darn good. The suspension setup is on the firm side, you can track-ready firmness in Sport mode. On the highway, there is plenty of feedback from the suspension system into the car, but it also has a high degree of control that enables the system to absorb road imperfections the best it can. We also like the grip from the Michelin Pilot Sport 4 tires shod on our tester.

Steering feel is superb with equally sharp reflexes from the wheel. On-center feel is good in all modes, which helps in maintaining control on turns and on the Interstate. Brakes are superb with excellent pedal feel and response. We found the Stinger to stop well in normal and panic situations. 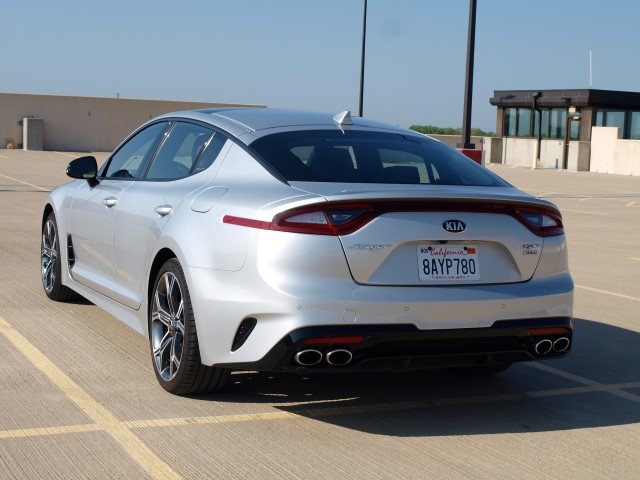 You can get the new Kia Stinger starting from $31,900 for a four-cylinder, rear-drive model that is far from basic in equipment content. Our GT2 AWD tester resides at the top end of the lineup, with a sticker price of $52,300 as tested.

If you do not pay attention to the badge on the front end, rear end, and the steering wheel, the Kia Stinger is a superb premium sports hatchback. It makes no apologies for the way it looks, or the way it drives. It is a great car for those looking for something different that is beyond just being sporty: select the right model, and your pulse is immediately quickened.

As for matching up the buzz the Kia Stinger garnered, when you drive around and people crane their necks in its direction, we can confirm that the hype is real. So is the badge. To every Soul, Forte, Sportage, Sorento, and Optima owner: you now have got a Kia that will fly your flag proudly.