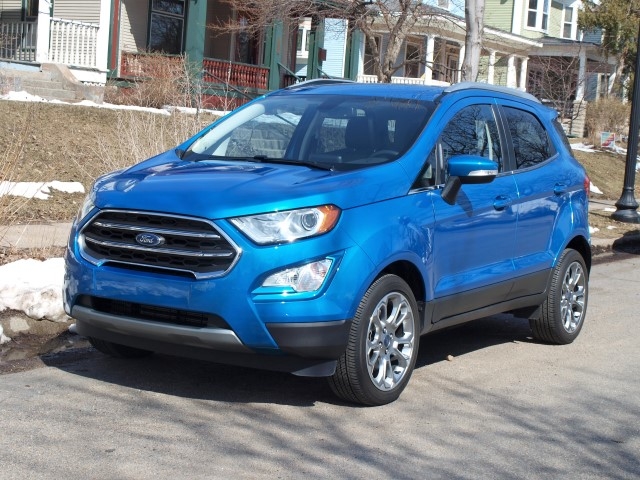 Finally, Ford introduced a small SUV for the city crowd!

Well… actually… this Ford has been around for a while. The EcoSport has been Ford’s key vehicle in “emerging markets” since 2003, when it was introduced to the Brazilian market. This current version has been around since 2013 and was available elsewhere in the world—except for the U.S. and Canada. To sell it here, Ford had to make some improvements and updates, such as applying a signature grille, moving the spare tire from the tailgate to underneath the rear end, a major upgrade inside with a new infotainment screen and other global controls and features.

For a vehicle that is made in far-flung places, such as India, Romania, China, Brazil, Thailand, and Russia, its debut stateside is timed just right. The subcompact SUV/crossover market is ripe, full of competitors from almost every manufacturer. Plus, there are more entrants coming very shortly.

This brings up a question about the 2018 Ford EcoSport—did it arrive too late for the subcompact SUV market? Or, is its arrival to the U.S. right on time?

To answer these questions, a very good look at the 2018 Ford EcoSport is in order. While it has been a global success for the past few years, it needed some updating not just to enter the American market. The same look you see here has been added to all global versions for the OneFord program—making common vehicles for all markets Ford is present in. 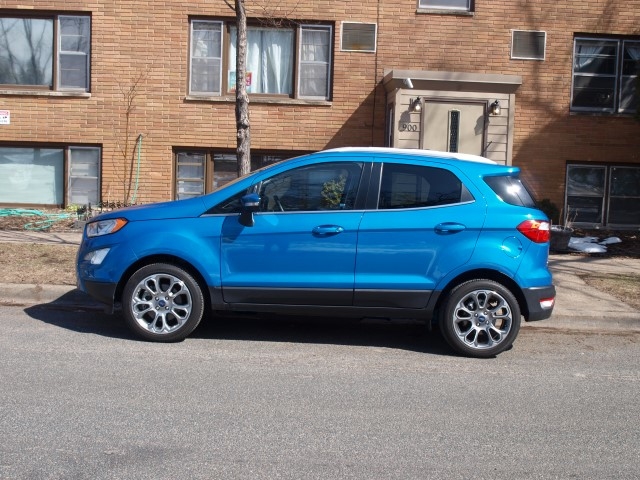 The EcoSport shares a common platform with the current Ford Fiesta, but that’s where the similarities stop. With a raised ground clearance and taller profile, the EcoSport has its own distinctive look. It’s more of a reduced size Escape than a raised Fiesta variant, which makes the EcoSport stand out in its class. It is also a very short vehicle—161.3 inches long with a 99.2-inch wheelbase. These measurements are about an inch or two longer than the Fiesta hatchback.

When you look at the EcoSport, you look at a very compact design dominated by the four doors into the two rows of seats. The front end fits within Ford’s design language, including its large headlamp and fog lamp units. The rear end is crowned with a wraparound rear quarter glass that also frames the tailgate. Our top-of-the-range Titanium tester wore 17-inch alloy wheels to finish up its overall look.

Let’s take a look at the word “tailgate.” Almost every SUV sold in the U.S. has their rear cargo access hinged at the edge of the roof. Since the EcoSport was originally designed for markets outside of North America, the rear access hinges on the driver’s side. It is because that most markets offer the EcoSport with an external spare tire. Ford decided not to offer this feature for their U.S. EcoSports.

Another thing about the tailgate is the location of the release. We found that when people unfamiliar with the EcoSport tried to open it from the area above the license plate—located where you find it on most SUVs. If you look toward the passenger side and find the chrome piece that is a part of the taillamp unit, put your hand underneath there and click on the button. That is how you open up the tailgate. 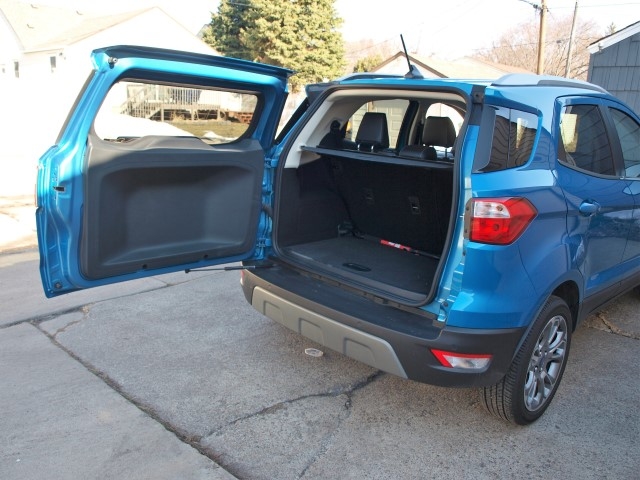 Behind that tailgate door, there are 20.9 cubic feet of space behind the second-row seats. Fold down those seats, and you have 50 cubic feet to play with. Cabin-wise is a designed for four passengers, five people in a pinch. If everyone is of average-sized, you could seat four of them easily. If one of us would be of a larger size, perhaps some combination of two adults, one pre-teen child and an infant in a child seat. This is a pretty conservative estimate.

Front seats offer some support and comfort. Our Titanium tester offers leather seating with some power adjustments for rake, recline, and lumbar. Our view outward was wide open, due to a huge frontal glass area and a low cowl. A taller driver would look down on a pretty good instrument binnacle, including clear to read dials and a nice information screen in-between the speedometer and tachometer. If you love your Fords, there is a lot of consistency in the EcoSport with the rest of its North American lineup—good quality controls that are also logical. This includes using the steering wheel from the Focus to finish off the controls inside of this small urban SUV.

The newest addition to the global EcoSport is the tablet-like eight-inch screen powering the SYNC 3 infotainment system. It is securely attached to the low cowl, but it is positioned low for tall drivers to look at. The two knob controls are very good. The sound in our Titanium came from a nine-speaker B&O PLAY audio system. It is pretty good in turning in solid sound throughout the cabin. 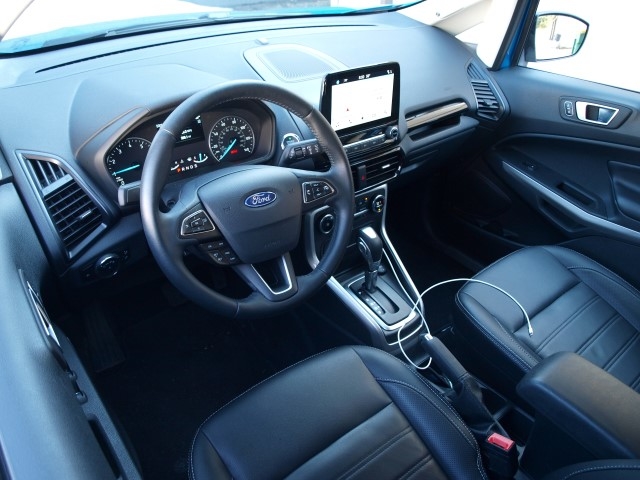 For our market, we have two powertrain options. In the Upper Midwest, we would most likely get our EcoSport with a 166-horsepower 2.0-liter four-cylinder engine with a six-speed automatic transmission and all-wheel drive. However, our tester came with front-wheel drive and its exclusive 123-horsepower 1.0-liter turbocharged three-cylinder EcoBoost engine. The same six-speed automatic transmission is standard on this driveline, as well.

The latter driveline will surprise you. Not because it has the task of sending 3,060 pounds worth of small SUV across town. It is its spunkiness, lack of turbo lag, and willingness to do the job of taking 3,060 pounds of SUV across town and beyond. Meanwhile, it delivers good fuel economy for a vehicle in its class. We averaged 29.3 MPG in our three-cylinder EcoBoosted tester.

The best way to describe the driving experience of the Ford EcoBoost is the ability to tame a vehicle once designed for rougher conditions in places like in Latin America and Asia. The ride is very smooth, devoid of pitchiness and feedback from the road. It handles potholes quite well. Handling is on the soft side, showing a subtle degree of roll and lean through the turns. The steering offers a pretty tight turning radius, due to its size. A few more inches on the wheelbase would make this even better. Steering wheel response is good, but devoid of road feel. On-center feel is soft. The brakes are actually very good with superb stops in normal and panic situations. 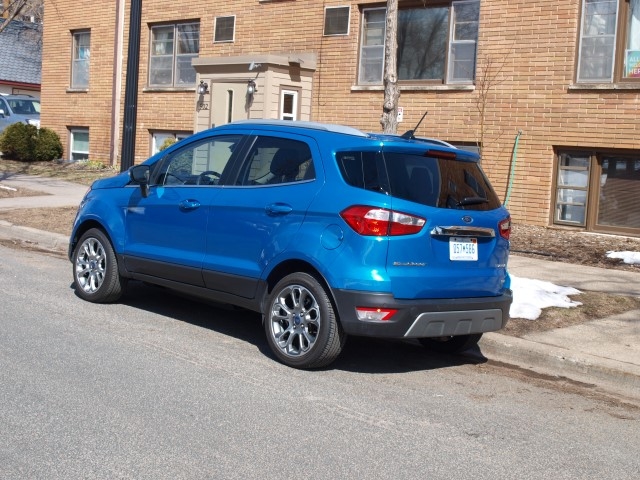 Pricing for the EcoSport starts at $19,995 for an S model with front-wheel drive. Our Titanium tester came with a sticker price of $27,270.

Ford’s global small SUV has turned into a key addition for the brand stateside. It resolves the issue of reaching out to densely populated areas with a vehicle that is useful for its denizens. The words we found that make the EcoSport work for you are usefulness and fun. If you do not mind the side-hinged tailgate of the EcoSport, then it is a rather useful small SUV. If you choose the front-drive model, you’ll love the spunkiness of the three-cylinder EcoBoost engine. However, our all-wheel-drive-oriented market may require a test drive of the larger, non-turbo engine for comparison.

If one is looking for a perfect vehicle for street parking outside their apartment—the EcoSport will fit the bill.