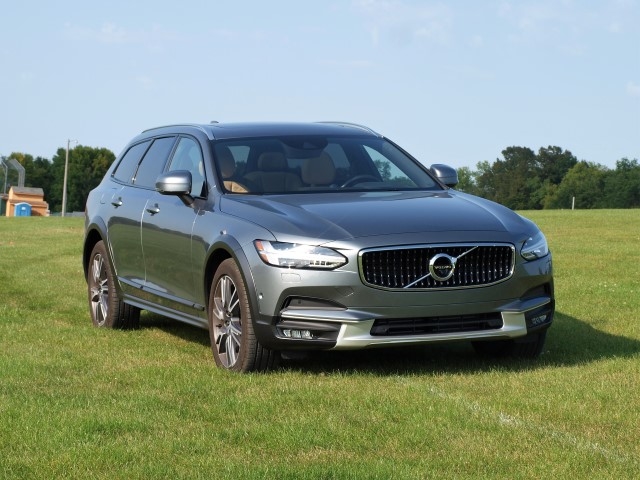 When I was a kid, the station wagon was a status symbol among families.

Having a station wagon meant you had space for the kids, your luggage, and an instant sense of adventure. They did not possess the interior volume of future minivans and SUVs, but the station wagon held the family together—even on long trips to see Mount Rushmore or to the family down in Chicago.

In some neighborhoods, families owned station wagons that were more than equal to others. They not just owned the most luxurious models—leather- or velour-upholstered, woodgrain-appliqued, thirsty machines from Buick, Chrysler, and Mercury. They also owned wagons from more premium imported brands.

For families looking for a station wagon, a Volvo was a symbol of not just upward mobility, but also these Swedish wagons possessed a reputation for being safe, secure, and sturdy. From the first Duett in 1953 to the popular 700-Series wagons of the 1980s and onward to the just-discontinued XC70, a Volvo wagon offered all of this in a superb package that all families—and, now, enthusiasts—enjoy with all of the utility and capacity in the world.

However, Volvo wagons have been on the small side for years, based on “premium compact” sedans. The big Volvo wagon has been missed. They offered a huge, boxy design with immense capacity and that famous (and optional) rear-facing third-row seat. Families who owned them enjoyed them for hundreds of thousands of miles, and often got a new one to replace the old one. A Volvo station wagon owner—in particular the 700- and 900-Series—was loyal to the core. It was one of the anomalies of automotive enthusiasm that is celebrated today.

The 2017 V90 was the return of the big Volvo wagon. Based off of the S90 sedan, the V90 expands the rear area to accommodate a spacious cargo hold. It is not as boxy as its predecessors, but it is aligned with Volvo’s present and future course in design and engineering. 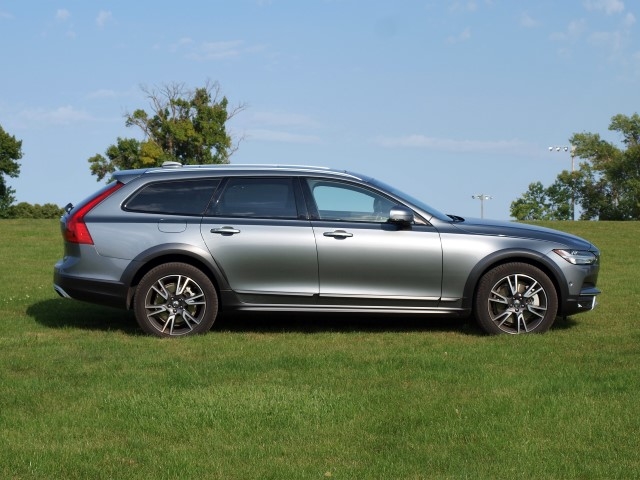 For the U.S., we only get the V90 Cross Country series. It is not that the regular V90 models won’t sell here. It is sold elsewhere in the world, and you can special order one in this country. It is just that we Americans have this fixation on the SUV and crossover. Therefore, giving the V90 the Cross Country treatment—higher ground clearance, body and underbody protection and so forth—would help the wagon’s cause for Volvo in one of its most important markets.

Does this V90 Cross Country give us that same feeling as its predecessors of the 1980s and 1990s?

Let’s start with the obvious: there is no direct lineage between the 700-/900-Series wagons of that era. The structure of the current 90-Series is front-wheel-drive biased in contrast to the rear-drive bias of the older, more iconic wagons, which means that perhaps the V90 has more in common with the front-drive-biased wagons that came in the 1990s and continue to be the backbone of Volvo’s lineup.

Well, that is somewhat correct. Yet, the V90 stands alone because of its size which is larger than even most premium wagons currently sold in this country. 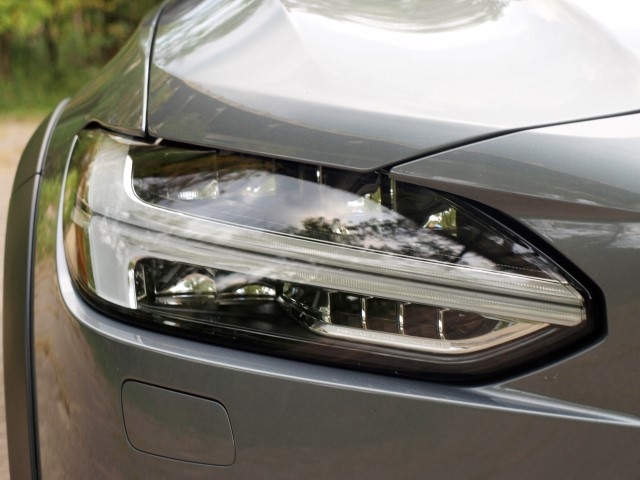 To add to its size is a ground clearance of 8.3 inches, giving it a lifted appearance for better off-road management. Granted, this is not designed to replace a Jeep Wrangler or Range Rover, but the V90 Cross Country serves as a better “crossover” than most similarly equipped and priced models. This is an important piece to take to heart. Volvo considers the V90 Cross Country wagon as a “crossover-wagon,” even with the superb new XC60 and XC90 in its lineup.

Yet, it is based on the S90 sedan. The wheelbase is the same between the two body styles, though the V90 is about an inch shorter. The wagon is also four inches taller than the sedan.

One thing to point out about this handsome wagon, the rear end. Volvo’s wagon design philosophy has always been to build “bricks.” In the old days, the rear end of every Volvo wagon ended at almost a 90-degree angle. The V90 is more angular; a cross between modern sedan design fused with wagon capacity. It is equally as handsome as the rest of the wagon, especially with its new boomerang taillights that began up the rear pillar and cross the tailgate.

We would be remiss if we did not mention the look and functionality of the “Thor’s Hammer” headlamp assembly up front and the special grille treatment denoting the Cross Country over other possible trims of the special order-only V90 wagon. And, that camera through the big Volvo logo up front. 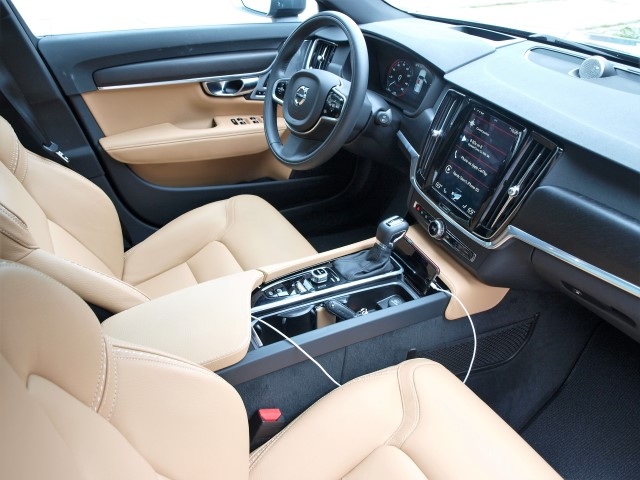 The balance of style translates into a handsome, functional, and luxurious cabin laden with Volvo’s latest technology throughout. Like the S90, the cabin is designed for driver control and customization. From the center Sensus screen, there are many functions that will fit with the mood and temper of the driver from the design of the instrumentation to the information needed to be read from the same screen. Controls are great to the touch and logical even without word descriptions. Storage in the center stack is also logical with a place for your mobile phone and three cupholders, all of which can be hidden by a sliding cover. The short gear lever is right for reach and easy to understand and work.

Front seat occupants are treated to large chairs that are firm, but supportive, for any length of drive. You get a solid set of adjustments, including lumbar support. Rear seat room is extraordinary for any size person. Behind the fold-flat rear seats is at least 33.9 cubic feet of cargo space. It expands to create 78.3 inches of cargo length from the front seats rearward. In all, it is a spacious cabin with room for all activities.

At $3,200, a V90 Cross Country customer can choose one of the best audio systems in the business. The Bowers & Wilkins system offers 19 speakers with 1,400 watts of power behind it. Through the Sensus screen, the system offers three different sound environments for everyone, from a concert hall setting to a studio setting. An individual stage setting can be adjusted for sound envelopment and intensity, not to mention it offers Apple CarPlay and Android Auto connectivity, along with app playback and the usual radio bands. No matter how you listen to music or get your information, the combination of Sensus and Bowers & Wilkins is worth the extra cost.

A V90 Cross Country customer has a choice of two engines. The T5 Drive-E engine starts with a 2.0-liter turbocharged engine, good for 250 horsepower. Our tester had the T6 upgrade, adding a supercharger to the turbocharged engine. That puts out 316 horsepower without hesitation. There is nominal lag from any boost source, even on passing and highway entrance maneuvers. Connected to our T6 engine is an eight-speed automatic transmission with a very solid all-wheel-drive system. 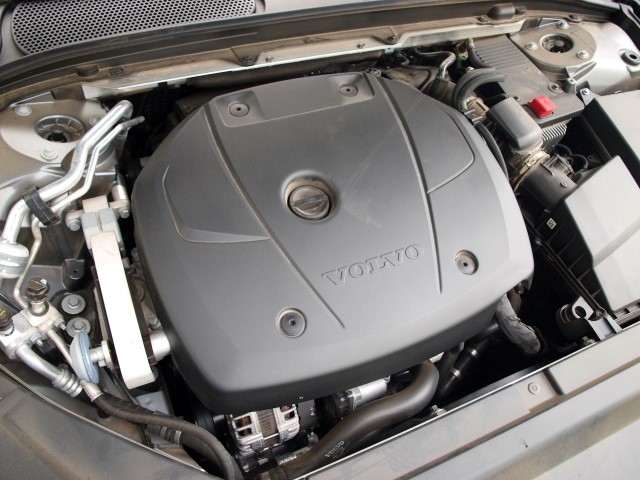 This engine/transmission/final drive combination is not made for performance or weight/capability, but for efficiency. In the end, we observed a fuel consumption average of 26.6 MPG.

Like all Cross Country wagons of the past, the V90 offers a softer, smoother ride thanks to its higher ground clearance. It means a longer suspension travel, with the assist of the available air suspension in the rear. Larger wheels and tires also help to deal with both highways and dirt tracks, and everything else in-between. Handling and cornering are quite decent, though expect some roll on harder maneuvers. Otherwise, it is quite lithe for a large wagon.

Part of that litheness is the electric steering system. It is very direct and offers a great turning radius and wheel response. Steering weight can be adjusted when selecting the Dynamic driving mode. It offers a more precise on-center feel for great control. Pilot Assist combines two active safety features—Adaptive Cruise Control and Lane Keep Assist. Combined, the V90 Cross Country offers aggressive lane holding control, while maintaining highway speed. If you are not used to anything regarding autonomous driving, then you might want to lighten up on the wheel and let the system take care of keeping you safe. But, please keep your hands on the wheel…

The braking system is pretty good, with solid stops in normal and panic situations. It leads to Volvo’s Intellisafe suite of active safety features, which includes a front collision warning system with pedestrian detection, along with a 360-degree camera and cross-traffic alert. One does not buy a Volvo without understanding how safe it truly is. That includes trusting the active and passive systems onboard this V90 Cross Country. 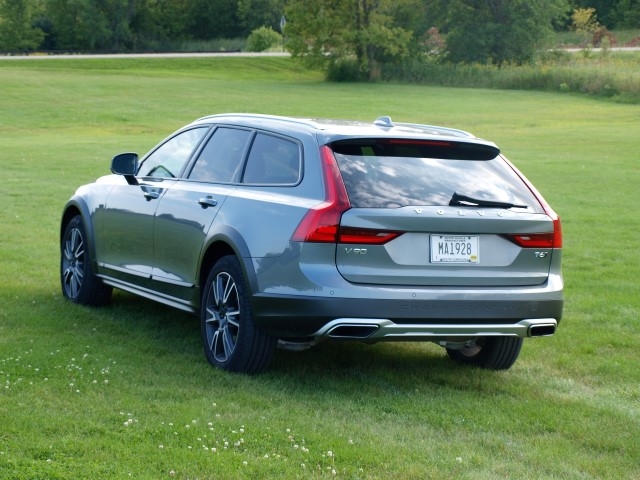 The return of the big Volvo wagon is a welcomed one. Yet, the brand’s sales figures tell us a different story. SUVs make up 67% of total sales volume for Volvo in this country. Granted, they have some really superb SUVs—namely the latest XC60 and XC90.

The V90 Cross Country is really a great alternative to the SUV, similar to the Subaru Outback, Volkswagen Golf Alltrack, Audi Allroad, and Volvo’s own V60 Cross Country. Yet, the larger Volvo offers more than any of these rugged go-anywhere wagons, more in terms of style, capability performance, luxury, comfort, safety, and connectivity. It also has that one intangible that draws us to the V90 Cross Country: its history.

The big Volvo wagon—dating back to the Duett, the Amazon, the 145, the 700- and 900-Series—is alive and well in a package that warrants maximum fun.