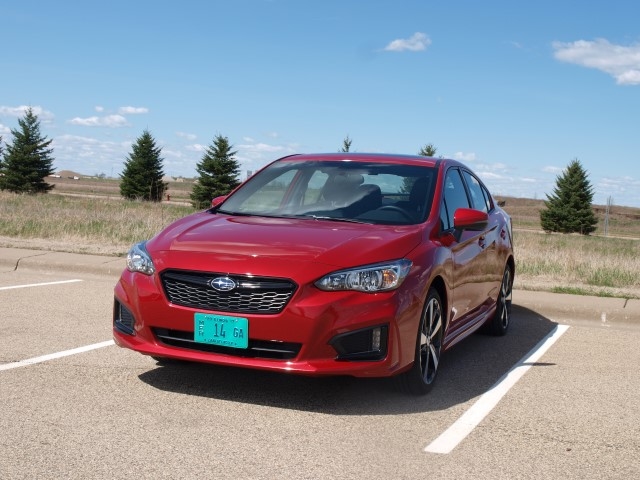 It is worth repeating every time we get a Subaru in for our “Ride Review.” We, as GLBT people, simply love them.

This is something worth celebrating. It is Subaru of America’s 50th anniversary this year. Since 1967, Subaru has been a part of our lives and culture. Though some may argue that we came at the right time during this historic run, as Subaru was one of the first automotive companies to recognize us in their marketing, sales, and corporate responsibility efforts.

As part of Subaru’s history, we responded. Not just with GLBT consumers purchasing (or leasing) Outbacks and Foresters. It is safe to say that we may know someone who owns a Legacy or a Crosstrek….or an Impreza WRX STi.

The latter car offers its own image and stereotype. Unlike our more common Subarus (the Outback and Forester) Imprezas were designed with a few kinds of customers in mind. Originally, the Impreza was seen as a competitor against the Toyota Corolla and Honda Civic. They were offered as a sedan and a wagon/hatchback with available all-wheel drive, but still powered by the horizontally opposed four-cylinder engine that is the hallmark of the Subaru brand. For those of us who could not afford an Outback or Forester, we actually bought these dependable compacts as a way to become Subaru owners. And we love them!

Then, the motorsport unit of Subaru Technica International went to work on the Impreza. The result was a turbocharged “boxer” engine that pushed beyond 200 horsepower — even beyond 300 horsepower — with all-wheel drive and a huge rear spoiler that would help in keeping the Impreza on the ground. Actually, those Imprezas from Subaru Technica International were capable of flying. That is, if you consider the jumps taken by those fearless rally drivers “flying.” 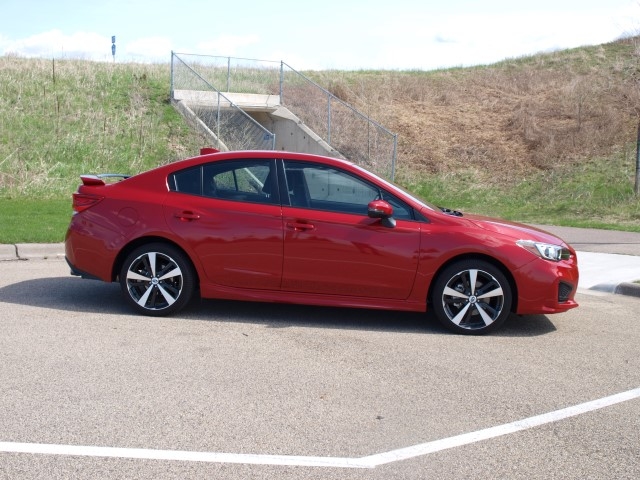 A generation of Subaru owners, devoid of sexual orientation, flocked to the WRX and STi models. They were the image cars for another stereotype of the sports compact crowd. One has to really want a basic Impreza, but not without getting a glance at a WRX or STi.

Over the generations, the Impreza was still seen as a dependable compact. Later versions came with standard all-wheel drive, but they were still sold as an alternative to the Corolla and Civic. But, what if we told you that Subaru now has an Impreza that is better than the mainstream compacts out there?

The 2017 Subaru Impreza has been transformed into something far from an alternative.

It starts with an all-new global architecture. This will be the platform for all Subarus to build off of going forward. It is seen as a flexible platform for products to be built alongside each other, which makes this Impreza the first of the line to be assembled at Subaru’s Lafayette, Indiana plant.

The lineup includes both a four-door sedan and a five-door hatchback. Our tester is the handsome sedan, with looks that appear to be influenced by the current WRX. The front end has a blunt but handsome shape, though drawn with an angle back toward the hood and roof. The lines are sharper than before, leading toward a sculpted and three-dimensional rear end sporting Subaru’s “boomerang” tail lights. The roof line is neither conservative nor adventurous, but capping a very handsome silhouette that offers sporty credentials, even in its most basic form.

Our Sport model adds an additional layer of sweetness to the Impreza’s mix. The rear spoiler is low and functional. The all-black grille is aggressively handsome; other models offer a chrome strip across it. Rounding out the Impreza Sport’s look are a set of 18-inch alloy wheels. 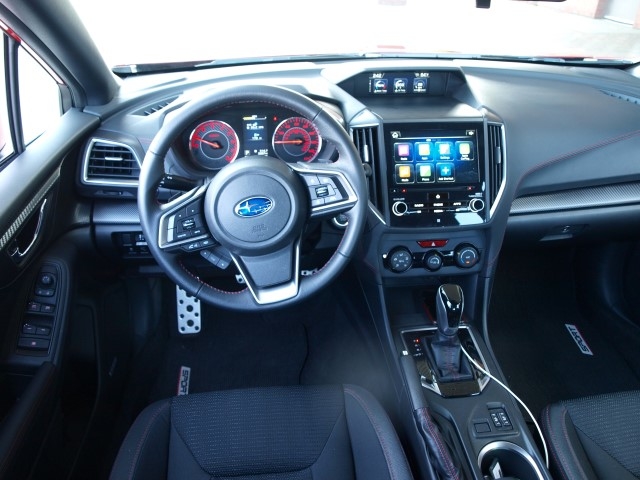 Stepping inside of the 2017 Impreza will be a winning experience. It is because it was named one of WardsAuto’s “Ten Best Interiors for 2017.” We agree wholeheartedly, thanks to the quality of materials, the overall layout and comfort, and the amount of information available to the driver. The latter point is the key to the Impreza’s interior, as there are three TFT screens and two big dials ready for the driver to work with. High on the center stack is another TFT screen providing key information not captured in the instrumentation binnacle. Otherwise, there is a solid information screen residing between the speedometer and tachometer, which includes the fuel gauge and trip/vehicle information. The Starlink screen is within finger reach for ready infotainment, along with climate controls. Overall, the controls are of high quality and superior functionality.

The big part of the Impreza’s package is a new update to the Starlink infotainment system, which now has Apple CarPlay and Android Auto integration on all models. The screen is larger — eight inches to be exact — with clearer view to understand controls on and off the screen. HarmonKardon provided eight speakers with 423 watts of power behind them.

The seats are very comfortable, although some negotiation will be needed to get the manual controls to fit certain bodies. There is enough bolstering on the cloth seats, along with nice surfaces for the body to work with. Rear seat room is very good, with passengers up to 6′ 1″ enjoying a nice space. The trunk holds 12.3 cubic feet of space, but the rear seat backs do fold down for longer cargo.

Under the hood is a reconstituted 2.0-liter horizontally opposed four-cylinder engine that was developed for the Impreza, now with direct injection. All told, the new 2.0-liter engine puts out 152 horsepower with 145 pound-feet of torque. On the base and Sport models, there is a five-speed manual transmission standard; something enthusiasts and those who can master the third pedal can enjoy. Otherwise, your Subaru can be equipped with a continuously variable transmission. All-wheel drive is standard on all Imprezas.

The one thing the Impreza offers to the driver is superb performance. Once it gets through the initial climb of the CVT, the engine relaxes and becomes quite the athlete. When pressed, the Boxer engine and CVT responds without hesitation. As for fuel economy we turned in an average of 28.0 MPG.

The suspension is excellent with a great mix of ride and handling. By excellent, it means a very smooth ride on the highway, with absorbent shocks and springs managing potholes and cracks and flatter cornering. With the Sport model, the ride/handling mix was very confident at every move it made.

It steers extremely well a direct feel in the turns at the wheel. The steering weight is heavier, matching the thick rim of the wheel. The brakes were more superb in feel and response. Stopping power is quite good in normal and panic situations.

EyeSight, Subaru’s active safety nerve center, is also available on most models in this generation of Impreza. It is part of a suite of features that include forward collision warning, adaptive cruise control, blind spot monitoring, lane departure warning, and rearview camera with cross traffic alert. 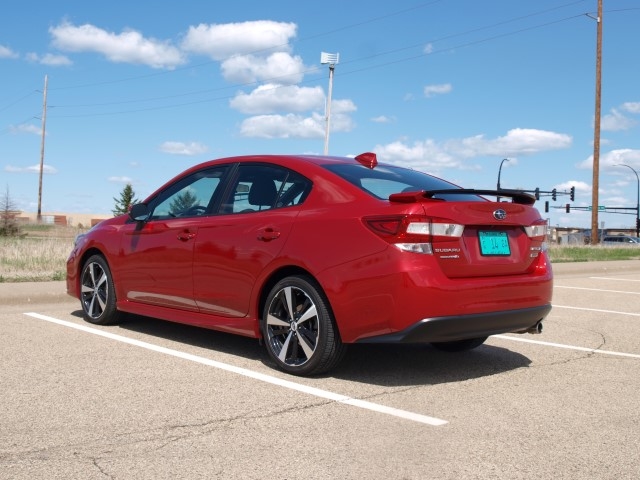 Let us get this off our chest: we absolutely love the new 2017 Subaru Impreza! It is not just a solid compact car, but it exhibits a lot of great attributes that will make it among the leaders in its class. It is athletic, well built, and a solid car overall.

The big question is whether you will buy one. It is not exactly intended to replace an Outback, Forester, or Crosstrek. But, for an all-wheel drive compact sedan with a different approach to performance, engineering, and customer engagement, those who are looking elsewhere may want to see and drive the new Impreza.