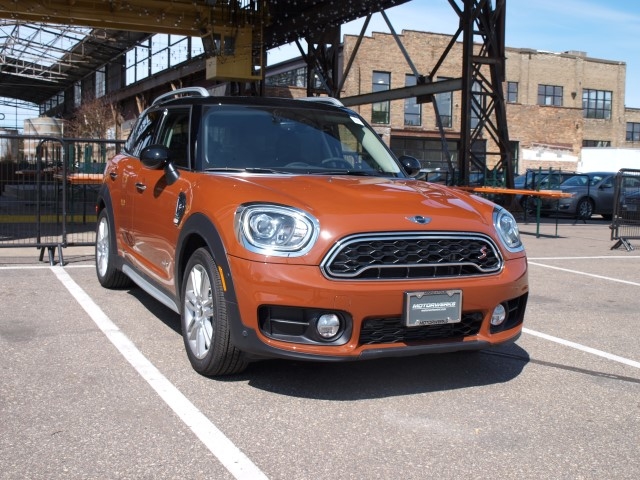 It seems that everyone is offering a crossover/SUV these days.

This is not a bad thing, really. Consumers want them and the manufacturers offer them to fulfill those wants and needs. It is a simple lesson in commerce.

From there, each offering has to be distinctive in styling, performance, capability, practicality, technology, and in providing the highest level of safety available. These are all easy to engineer and design, right?

Yes and no. But, who says that a crossover/SUV has to look, drive, and interact with its owner like everyone else?

For 2011, MINI introduced the Countryman. It was a moment that engaged with its owner and fan base, while the rest of the automotive and consumer world scratched their heads. There was proof that MINI made everyone notice: in 2012, one in three new vehicles sold was a Countryman. By 2013, 31 percent of all new car registrations for MINI were Countryman. In all, you may mark this “stretching of the brand” model a success.

For 2017, MINI introduced a new Countryman. The formula continued as such: a design rooted form the original Hardtop model, but with four-door access, a large liftgate, and space for five people and whatever they want to bring with them. It also offered the current engine range and the option of ALL4 all-wheel drive. This formula worked successfully from 2011 to 2016 in the original Countryman. It appears that they may have perfected it for this new one. 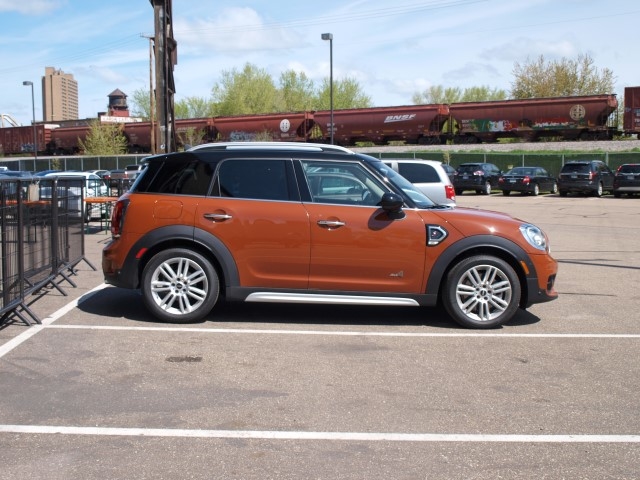 In this current round of product renewals at MINI, we found there was more involvement from parent BMW in the development of each new model. In the Countryman, BMW lent not only the platform from its X1 SUV, but the two engines they developed for MINI’s lineup and other key components and technologies the German company developed for the entire group. The Countryman is produced in the Netherlands, something that is sort of a reality for even an iconic British brand.

The basics of the Type F60 Countryman are that of an enlarged MINI Hardtop, applied to the BMW X1 platform — the UKL2 — and shaped accordingly. Compared to the previous model, the Countryman retains its upright body stance, but with some athletic and aggressive touches throughout. The roof area rearward of the C-pillar looks stretched, the front end molded aggressively, and the tailgate has been redone to put the license plate on it. In all, it looks more distinctive than the previous Countryman.

The formal name of our tester is the 2017 MINI Cooper S Countryman ALL4. In short, we’ll call it the Countryman. However, we like the details that the Cooper S brings to the Countryman. The grille texture, the side grilles on the front bumpers, and the 18-inch alloy wheels bring out more of the Countryman’s personality. What we love even more is the paint scheme on our tester: Chestnut with black roof and mirror caps. There is something about it that makes this Countryman pop even more. 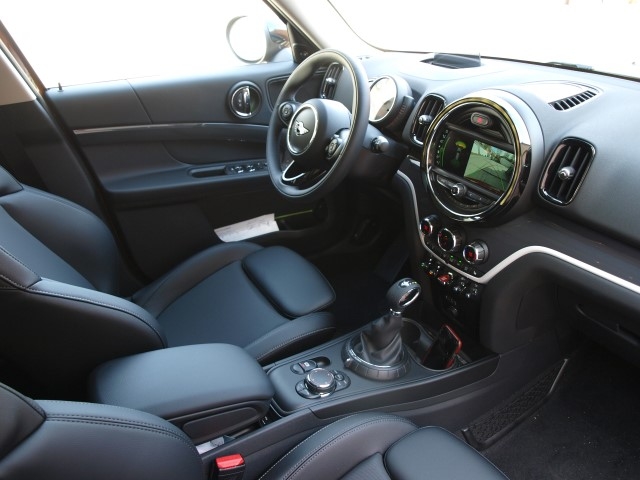 For MINI aficionados, the interior design is iconic. As we pointed out in our last review of a MINI — the Clubman — the center speedometer is no longer, it’s been replaced by the MINI Connected infotainment system. The speedometer, along with the tachometer, gas gauge, and information screen, is attached to the adjustable steering column. Switches range from old fashioned toggles to modern switches, all within the MINI’s design theme befitting its personality. That also includes a series of switches, along with MINI’s version of the iDrive knob, that links back to the MINI Connected screen.

The MINI Connected 5.0 system is perhaps the biggest improvement on the Clubman. It is of the latest generation with an improved home screen, better color coding for functions, and BMW’s latest navigation system on board our tester. Choose the Harmon/Kardon 12-speaker, 410-watt system and you get superb sound inside the Countryman.

The front seats offer deep bolstering, while maintaining maximum comfort. It is also adjustable for height, rake, and recline. Rear seat space is superb with loads of headroom and great legroom for tall people. Occupants in both rows of seats will enjoy the available panoramic roof with a sliding shade for each row. The cargo hold is flexible, starting with 17.6 cubic feet in covered cargo behind the seat expanding to 47.6 cubic feet with the rear seat folded down. This also includes underfloor storage in the back.

Like the rest of the MINI lineup, you can get the Countryman with a choice of two engines. Cooper models get a 134-horsepower, 1.5-liter, turbocharged three-cylinder engine, while the Cooper S gets the 189-horsepower, 2.0-liter, turbocharged four-cylinder engine. The Cooper S is truly the choice of the Countryman. Our tester came with an eight-speed automatic transmission with the ALL4 all-wheel drive system. The driveline is just fine for this vehicle, considering it only weighs 3,671 pounds. We were unable to measure fuel economy, but the sticker states that we should average 26 MPG with this tester. 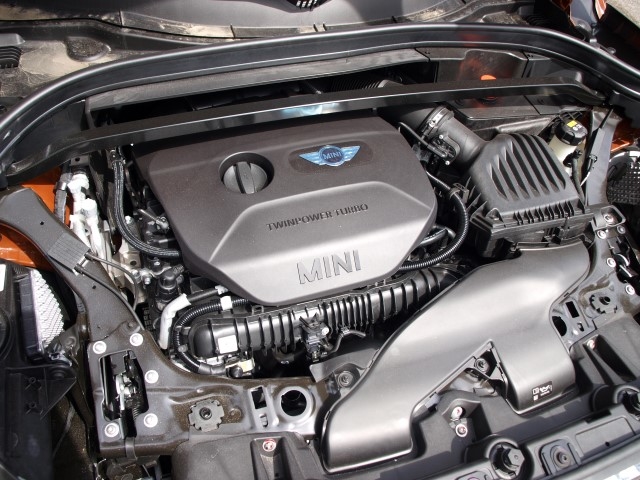 There are three drive modes to choose from by a switch at the bottom of the shifter. Select Green or Medium and you get a nice, smooth ride, though it comes with a soft steering feel and plenty of roll through some hard curves. Switch to Sport and things improve for the better. The steering feel becomes heavier and more controlled, while the suspension tightens up for better curve management. However, Sport mode still offers a very smooth ride with a lot of dampening from potholes and cracks on the roadway.

With steering weight comes great turning precision and response. The system reacts to road feel and enables a tight turning radius for better maneuverability. The brakes are good with great pedal feel and response. We were unable to do panic testing on these brakes. The Countryman has a reputation for being safe. This vehicle offers a rearview camera, parking sensors, rain-sensing wipers, a head-up display, and adaptive cruise control, among other active safety features.

The sum of the vehicle is quite simple: the MINI Countryman works as a crossover that will take people wherever they want to go in a fun, fashionable way. That’s just scratching the surface. As a premium product, it offers a higher level of quality, technology, and performance that will attract both loyal and new customers to the MINI brand. 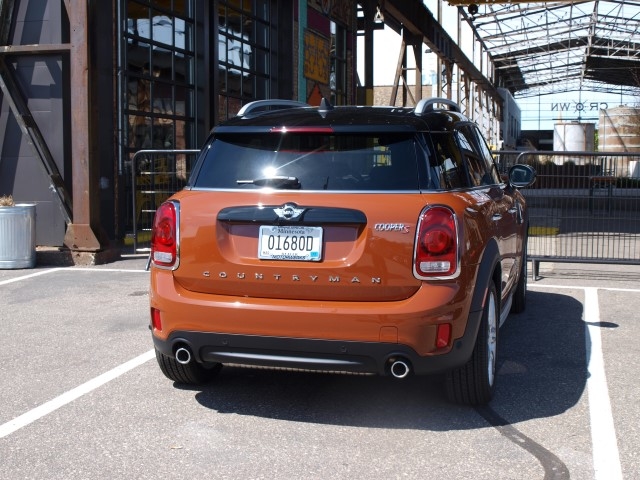 To offer something in a hot market segment, one has to be different. That is something the MINI Countryman accomplishes quite easily. But, can it satisfy its owners and deliver on the promise of practicality, capability, and overall satisfaction? If you already love what MINI offers to their customers, then the short answer is “yes.” However, if you are not convinced, one drive in a Countryman will definitely provide you with that answer.